Modern and contemporary Art? It can be very seductive and impressive but sometimes it can be elusive. What if it is the Old World, the craddle of classical and religious art, the best place to find out?

Whatever you think, let’s start a fascinating journey through modern and contemporary art in Sicily. You’ll be overwhelmed by many unexpected surprises.

Crossing Palermo historic centre, the so named Felicissima , we reach via Sant’Anna in the Kalsa district. Since 2006, the Civic Gallery of Modern Art, today GAM,  has moved here. 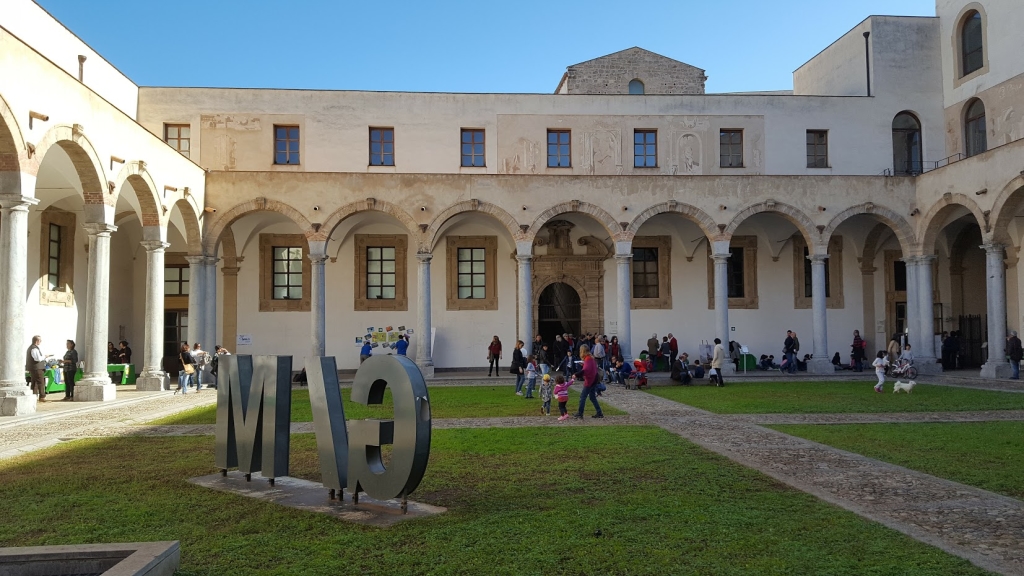 Over two hundred works are exposed in this three floored gallery, opened in 1910; the works include paintings and sculptures by prominent romantic and realistic artists up to the twentieth century art exponents: Francesco Loiacono, Antonio Leto, Ettore de Maria Bergler, Michele Catti, and the latest Renato Guttuso.

In 2007, the Gallery has enriched its collection thanks to the donation of two sculptures by Giorgio De Chirico “Ettore e Andromaca” and “Oreste e Pilade”.

Let’s continue our walk and, after about two hundred meters, we come across Palazzo Riso – the Museum of Contemporary Art in Sicily.

The Polo Regional Museum of Modern Art of Palermo is situated inside the magnificent Palazzo Belmonte Riso, dating back to the end of the eighteenth century and belonging to the Ventimiglia Princes of Belmonte. It is an interesting example of a noble private residence that combines the magnificent late Baroque style to the neoclassical rigor.

The Museum’s permanent collection includes works related to a specific theme: the link ​​with the Sicilian territory. The visit is structured around a path divided into six sections; some sections host paintings by Alessandro Bazan and the “erasure” works of Emilio Isgrò, a rebellious artist and sculptor known worldwide. Another artist not to miss is the controversial Salvo, a tormented, intrepid, and inconsolable hyperrealist and abstractionist painter. 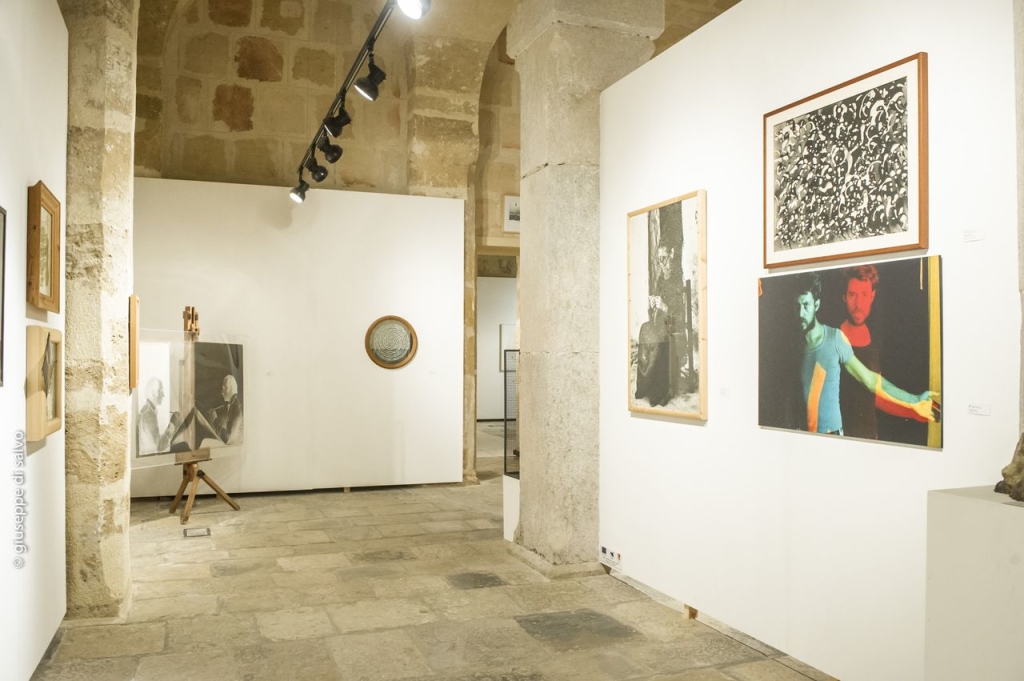 Palermo has also a Civic Gallery of Modern Art, Gipsothèque “Empedocle Restivo”, in Via Dante Alighieri. The gallery exhibits a pleasant collection consisting of about sixty sculptures in plaster, coming from the deposits of the GAM, among which some carvings by the Sicilian artist Ettore Ximenes (Palazzo Ziino Tel. +39 091 7407633). 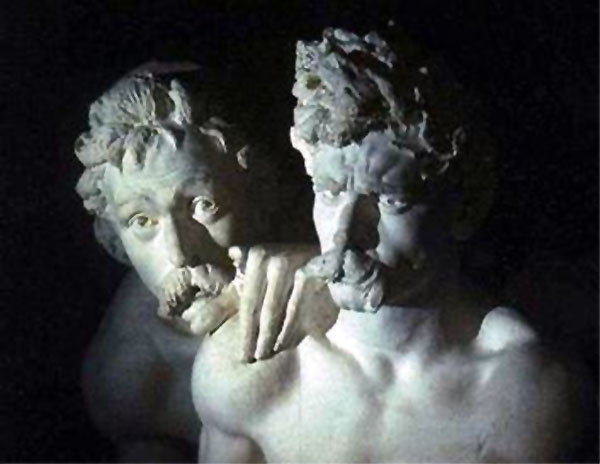 Let’s leave Palermo and head towards Bagheria, the town of Renato Guttuso, who was the father of contemporary painting in the early twentieth century. Who does not know his famous Vucciria, a crude and realistic work, highly emotional, with neat lines and violent colors? He painted with an unmistakable style, similar to Picasso’s with some expressionist influences. 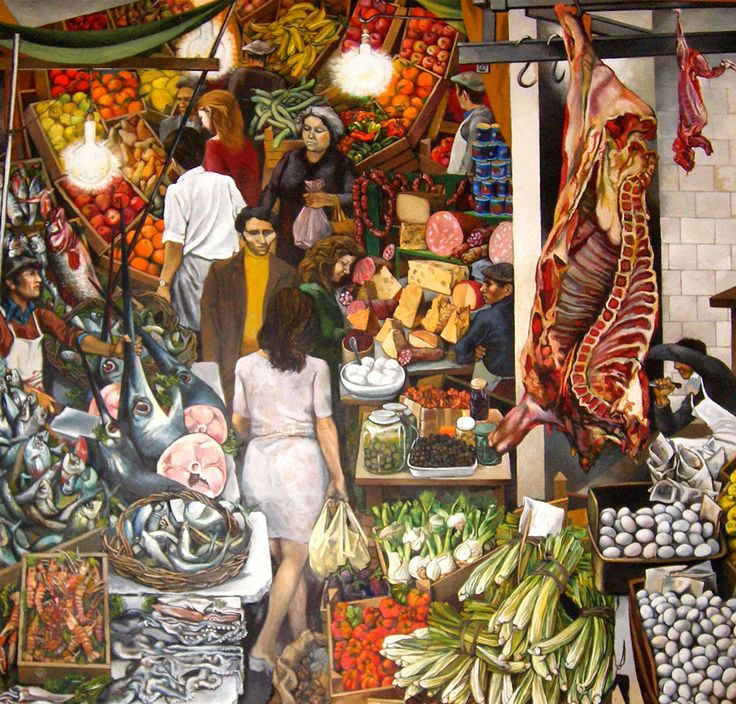 Now let’s head to the beautiful eighteenth century Villa Cattolica, that stands on a small hill  overlooking the Conca d’ Oro and the Gulf of Palermo; since 1973, the works donated by the greatest city’s artist, Guttuso, and those of ther 1900’s artists are exposed here. It also displays a selection of photographs taken by Giuseppe Tornatore, the film director of Baaria. 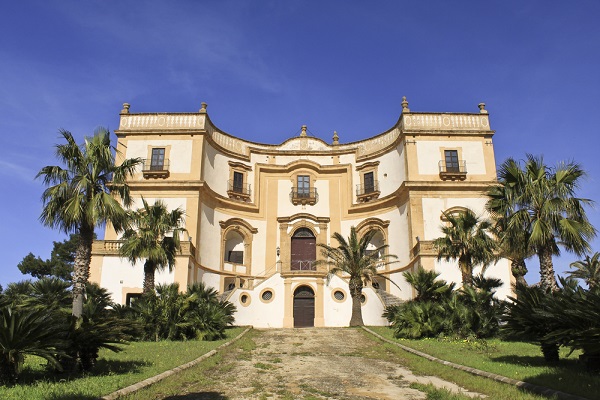 After taking a last look at Villa dei Mostri, we move to Castel di Tusa, near Messina, and take a swim in its beautiful sea.

We are now ready for Fiumara d’Arte.

We can start from the seafront of Santo Stefano di Camastra with the work named Finestra sul Mare by the contemporary artist Tano Festa. 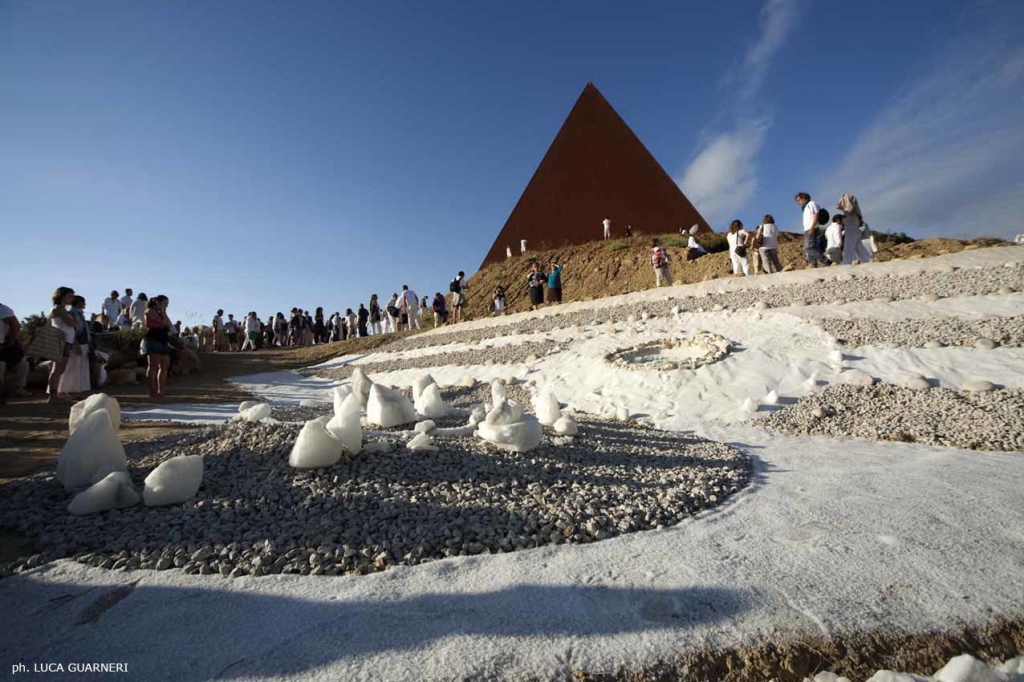 It is an aoutdoor art gallery that stretches from the Tyrrhenian coast to Nebrodi Park. Fiumara d’Arte project was conceived by Antonio Presti, a Sicilian businessman and a contemporary art collector, who in 1982 commissioned the artist Pietro Consagra a funerary monument dedicated to his father’s memory .

In 1986, when the work was delivered, he announced the birth of an outdoors museum. The museum exhibits contemporary sculptures with the aim of developing the area through the discovery of hidden and little-known places. All of this thanks to the ability of combining art and nature togheter. 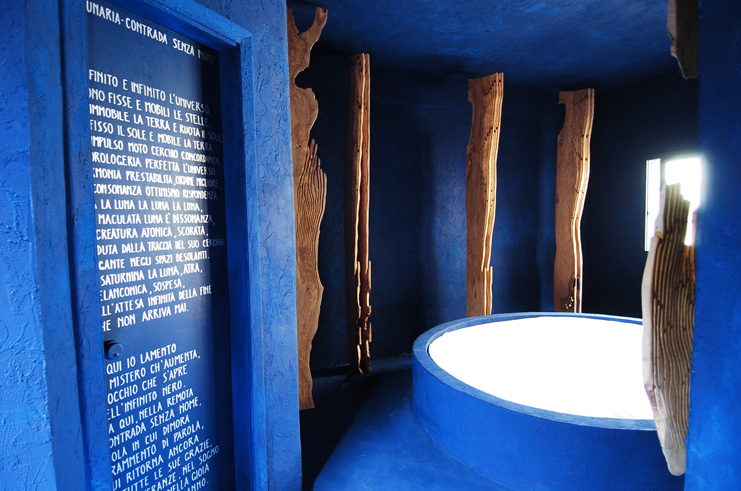 Let’s head to the east, along the Tyrrhenian coast, until we reach Messina, the main town of this area. Here the  GAMeC Gallery of Modern and Contemporary Art Lucio Barbera worths a stop.

Let’s admire the works of the greatest Italian and European exponents of many art mouvements: from Arte Povera to Pop Art, from Abstractionism to Avant-garde, from Futurism to Realism, as well as a sector entirely dedicated to the major contemporary local artists.

In the enchanting Lipari Island, belonging to the famous Aeolian archipelago, the former prisons inside the fortified Citadel, host Mare Motus, a prestigious permanent exhibition of contemporary art where about 40 artists are on display with their works of art related to the themes of freedom, sea and escape. 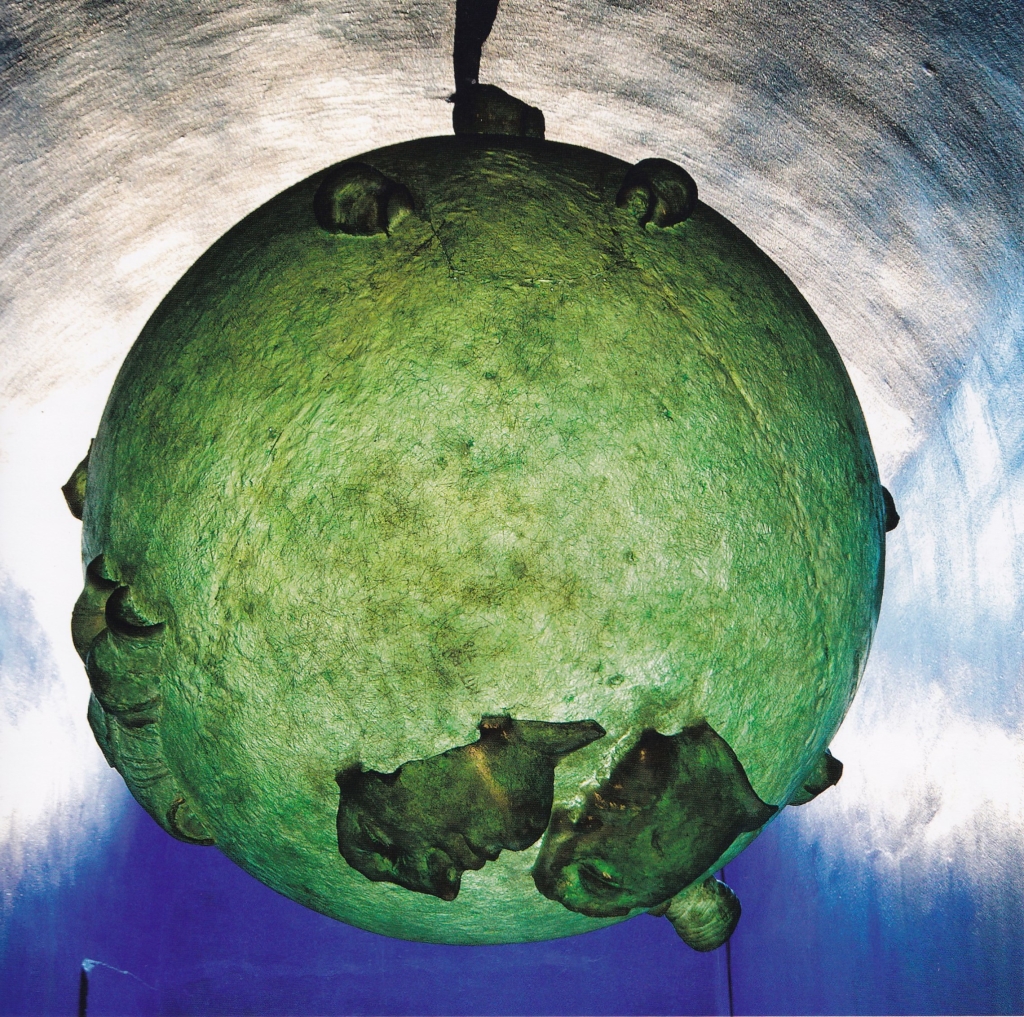 Let’s continue our journey and reach Catania, along the Ionian coast. Its Civic Museum, Castello Ursino, besides a picture gallery and some archaeological and numismatic collections, periodically hosts exhibitions of modern and contemporary artists internationally  renowned.

In this old district of Catania, at number 26 of via Castello Ursino, we found the Galleria di Arte Moderna – Ex Convento di Santa Chiara, with its interesting periodic exhibitions.

Located in a strategic position, a few steps from teh Civic Museum, Piazza Duomo and Piazza Università we find out  an entire city block, once a liquor factory and much more, today the current House of Art. It is the Brodbeck Foundation , commissioned  by Paul Brodbeck, a Sicilian-Swiss entrepreneur, at the end of 2007.

The project of the Foundation settled in the rough working–class neighborhood San Cristoforo, with the aim of “transforming the entire town in a reference point for contemporary art”. The “Collection Paolo Brodbeck – Italian painting 1949/2010″ shows the interest of the collector for Italian art. Here are some of the artists on display, to name but a few: Carla Accardi, Piero Dorazio, Piero Guccione, Renato Guttuso, Mimmo Paladino, Michelangelo Pistoletto, Mimmo Rotella, and Giulio Turcato. Before heading up the magnificent Via Crociferi, right in front of the arch of the Monastery of St. Benedetto, we find out the MacS – Museo Arte Contemporanea Sicilia, located in the Small Badia of the Monastery. It hosts  plenty of exhibitions, artistic events, and prestigious permanent collections of artists such as Alexander Timofev and Miguel Uribe Escobar.

In San Francesco d’Assisi square, at the second floor of Palazzo Gravina Cruyllas, known for being the birthplace of Vincenzo Bellini, we find the Museo Emilio Greco. 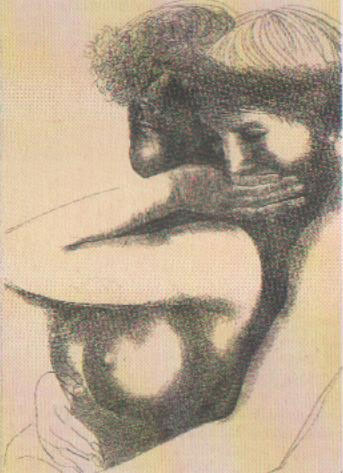 The works by Emilio Greco , one of the most interesting artists of the twentieth century, are exhibited in the most prestigious museums worldwide, such as the Tate Gallery in London, the Hermitage in St. Petersburg, some American museums, and the Vatican. The famous bronze door of the Cathedral of Orvieto and the monument of Pinocchio in the Collodi Park are two of his works. The museum, dedicated to the famous sculptor from Catania, was inaugurated by the artist himself in 1994 and it was built after his generous donations to the city of Catania. The museum hosts a permanent collection of 150 graphic works by Greco, made ​​between 1955 and 1992.

Continuing in the direction of the Central Station, on the ancient Via Vittorio Emanuele, let’s admire  Palazzo Platamone, known as Palazzo della Cultura, and Palazzo Valle, seat of  the Puglisi Cosentino Foundation. Dating back to the eighteenth-century they both periodically host  many Modern and Contemporary International Art Exhibitions.

The port of Catania has also been transformed into an open-air museum: old and monumental silos have been skillfully transformed by eight international artists: Okuda and Rosh333 from Spain, Intersni Kazki from Ukraine and the Italian artists Microbo, Bo130, Danilo Bucchi and VladyArt.

Defined as the largest wall painting  in the world, these 10 storey high silos are the most intriguing  look  over the sea that has ever been painted under the direction of Portuguese artist Alexandre Farto, alias Vhils. This  magnificent 21st century monument represents a contemporary  narration  of  Sicilian myths and legends: Colapesce  that re-emerges  and watches to the landings of illegal immigrants, Bellini’s beautiful and colorful Muse, Ulysses’ escape from Polifemo, the perpetual motion of Scilla and Cariddi, the Minotaur.

Within a short distance from the city, the La Verde La Malfa Foundation is home to several permanent collections of modern and contemporary art with particular attention to the Sicilian artists of the twentieth century. The museum’s tour begins as soon as you cross the main gate, going towards the Park of Art, a true outdoors museum with a series of modern sculptures and contemporary art installations. Since 2015, the Park has joined the GRANDI GIARDINI ITALIANI Group and hosts many theatrical performances, concerts, art performances and educational paths. 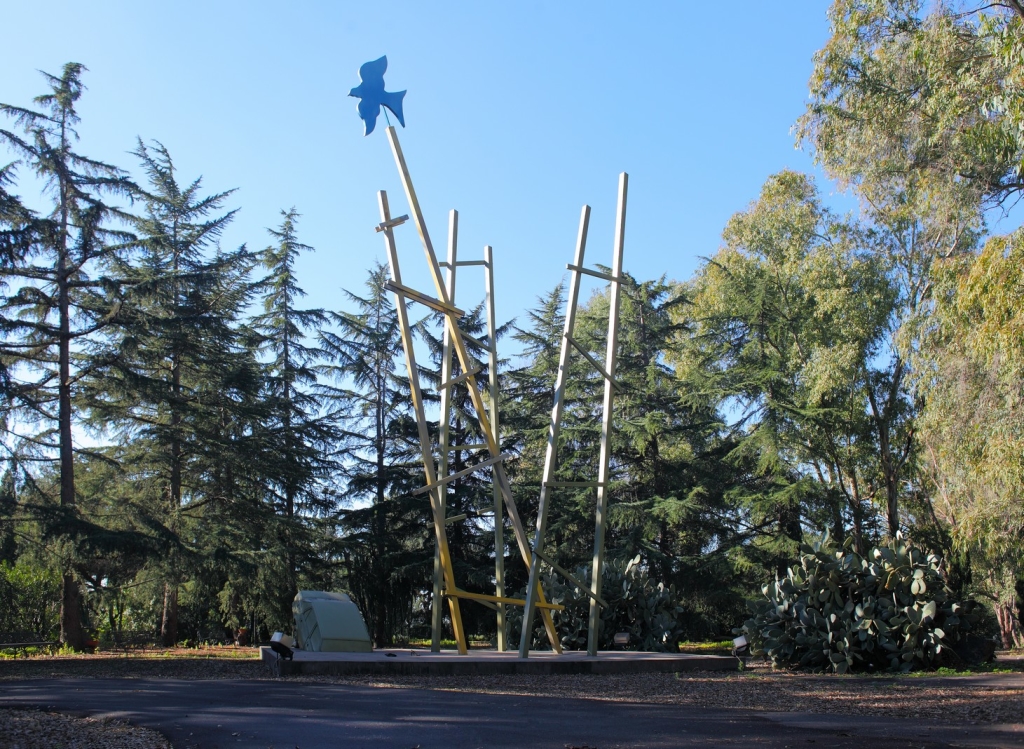 At the feet of Mount Etna, the Museum Incorpora,  hosted inside the former Casa del Fascio, in Linguaglossa, exhibit the collection of the Calabrian master Salvatore Incorpora, a sculptor and multifaceted artist, naturalised in Sicily. In his artistic nativity scenes, in his canvases and sculptures we recognise the great artists of the Sicilian 20th century: the expressionism and the humanity of Renato Guttuso, the chromaticism and the subjects dear to Giuseppe Migneco, the originality and the polymaterial art of Salvatore Fiume. 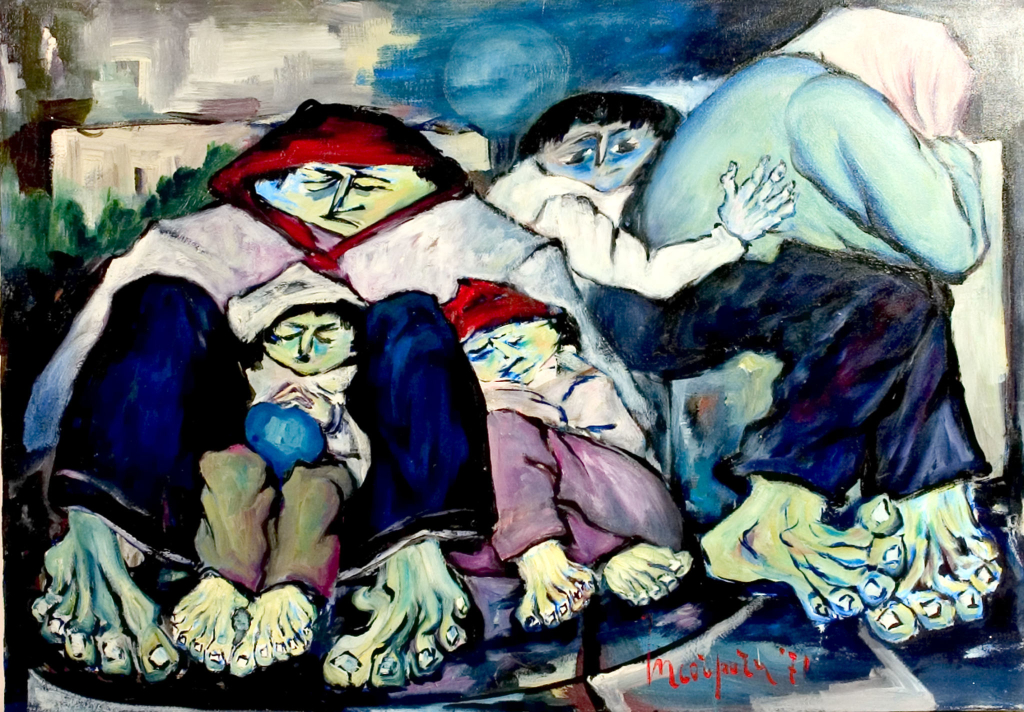 Just ten kilometers away from the Valle dei Templi in Agrigento,  we find out some small gardens hidden in a Kasbah  made up by seven miniature shortcuts linked one another: it’s Favara’s Farm Cultural Park, ranked sixth in the world as a tourist destination for contemporary art lovers, as reported by the British Blog Purple Travel.

Once again art combines with a project of social innovation and urban renewal projects. Fans of land art cannot miss a visit to the outdoors Cretto di Burri (crack)  in Gibellina (Trapani), a very extensive work of art by Alberto Burri.
The Guggenheim has dedicated a special exhibition to honor the centenary of Alberto Burri’s birth, who designed the Cretto di Burri with the intent of crystallizing the town after the 1968 Belice earthquake. The ruins of “Ibbiddina”, covered by white cement, and the labyrinth of the silent (labirinto dei silenziosi) make the place extremely charming. In Marsala (Trapani), there is the imposing sculpture by Salvatore Fiume: the “Fontana del Vino“. The works by Salvatore Fiume are on display in some of the most important museums in the world, including the Vatican museums, the Hermitage Museum in St. Petersburg, MoMA in New York, the Puskin Museum in Moscow, and the Gallery of Modern Art in Milan. 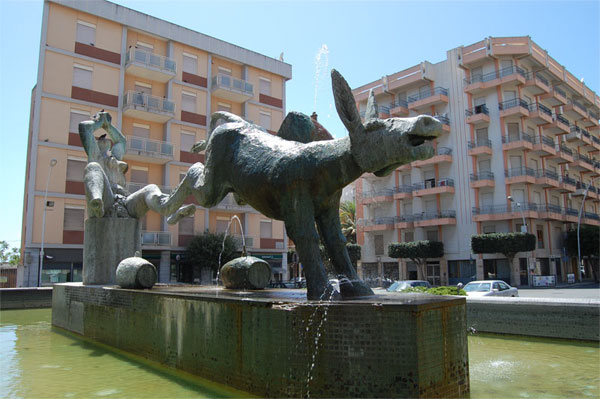