Trapani, with its sickle-like shape, from the Greek Drepanon, benefits from an enviable geographic position: between two seas, at the foot of Monte Erice, near Selinunte, facing the marvellous Aegadian Islands and the famous salt pans.
As you walk through its historic centre, the various cultural layers which the many ruling powers over the centuries have left evidence of in its architecture, art and monuments are immediately obvious. The city’s oldest and most characteristic streets are Via Garibaldi, Corso Italia and Corso Vittorio Emanuele.

Built during Spanish rule to defend against raids, the Torre di Ligny is a symbol of the city. 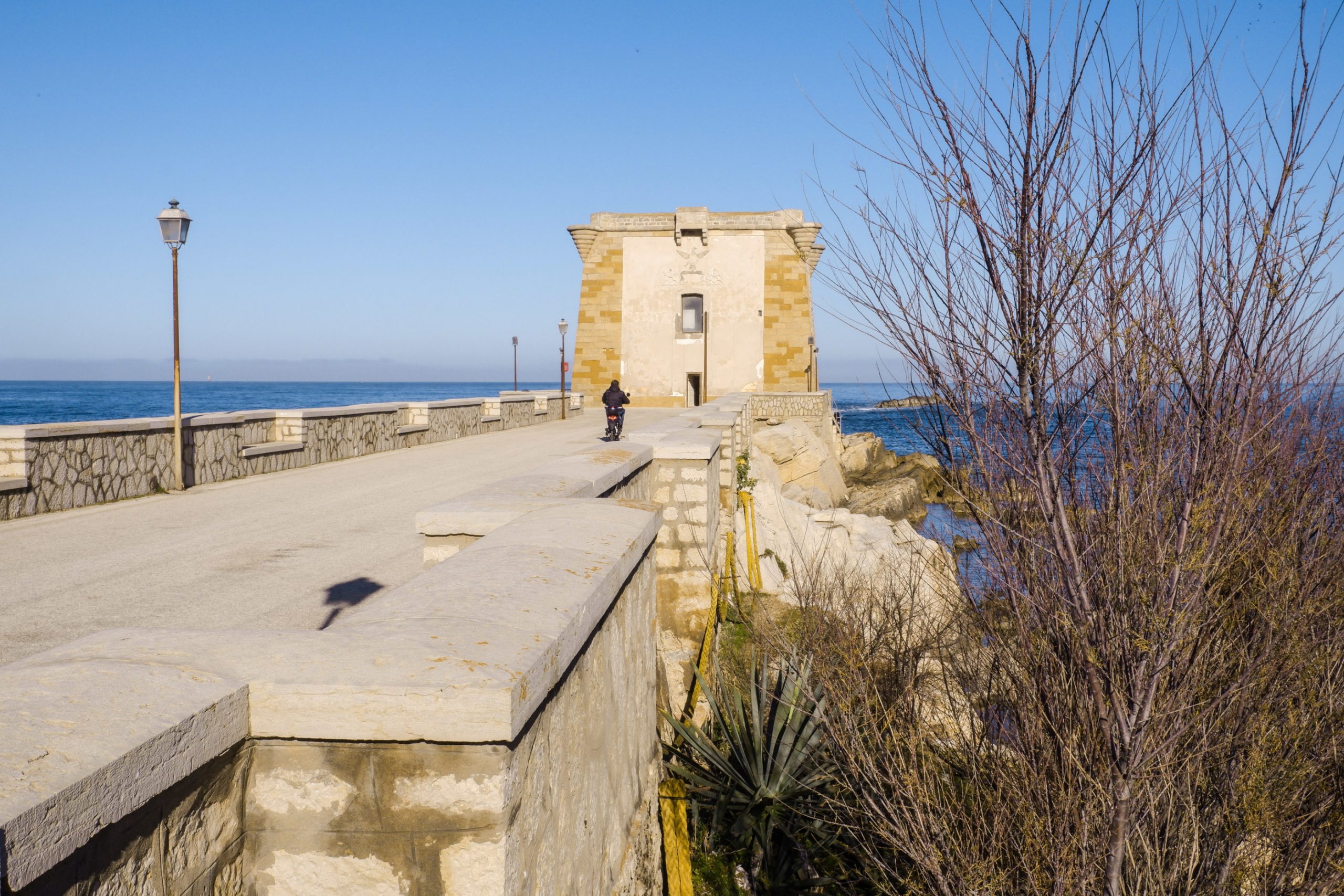 The tower is located at the far end of the western coast and has a breathtaking view over the Strait of Sicily and the Tyrrhenian Sea. Used by the Navy as an anti-aircraft position during the Second World War, it today houses the Museo Civico della Preistoria and a marine archaeology room which even has a helmet found on the city’s seabed.

In the very centre of the historic centre, on one of the old watchtowers, the Torre dell’Orologio is the oldest gate of the city. Its façade has one of Europe’s oldest astronomical clocks dating back to 1596 which has one unusually rare feature. The clock actually has two circular quadrants: that of the sun, with hands which point to the signs of the zodiac, the solstices, the equinoxes, the seasons and the cardinal points rather than to the hour, and the lunar quadrant which instead indicates the lunar phases.

The 18th-century Chiesa del Purgatorio, of Spanish origin, houses the “Mysteries”, 20 sculptural groups created by Trapani craftsman which tell the story of the Passion of Jesus.
Every Good Friday one of the oldest religious parades sets out from this church, the Processione dei Misteri, in which the twenty masterpieces are carried through the city’s streets. The impressive procession snakes its way through the small city streets for 24 hours in an emotional mixture of religion, sounds, lights and colours. The groups are decorated with precious ornaments and floral arrangements and are carried on the shoulders of the “Massari”, who make the holy groups move in time with the music played by the bands, with a movement known as the annacata .

The Baroque Fontana di Saturno stands in the small piazza of the Chiesa di Sant’Agostino. 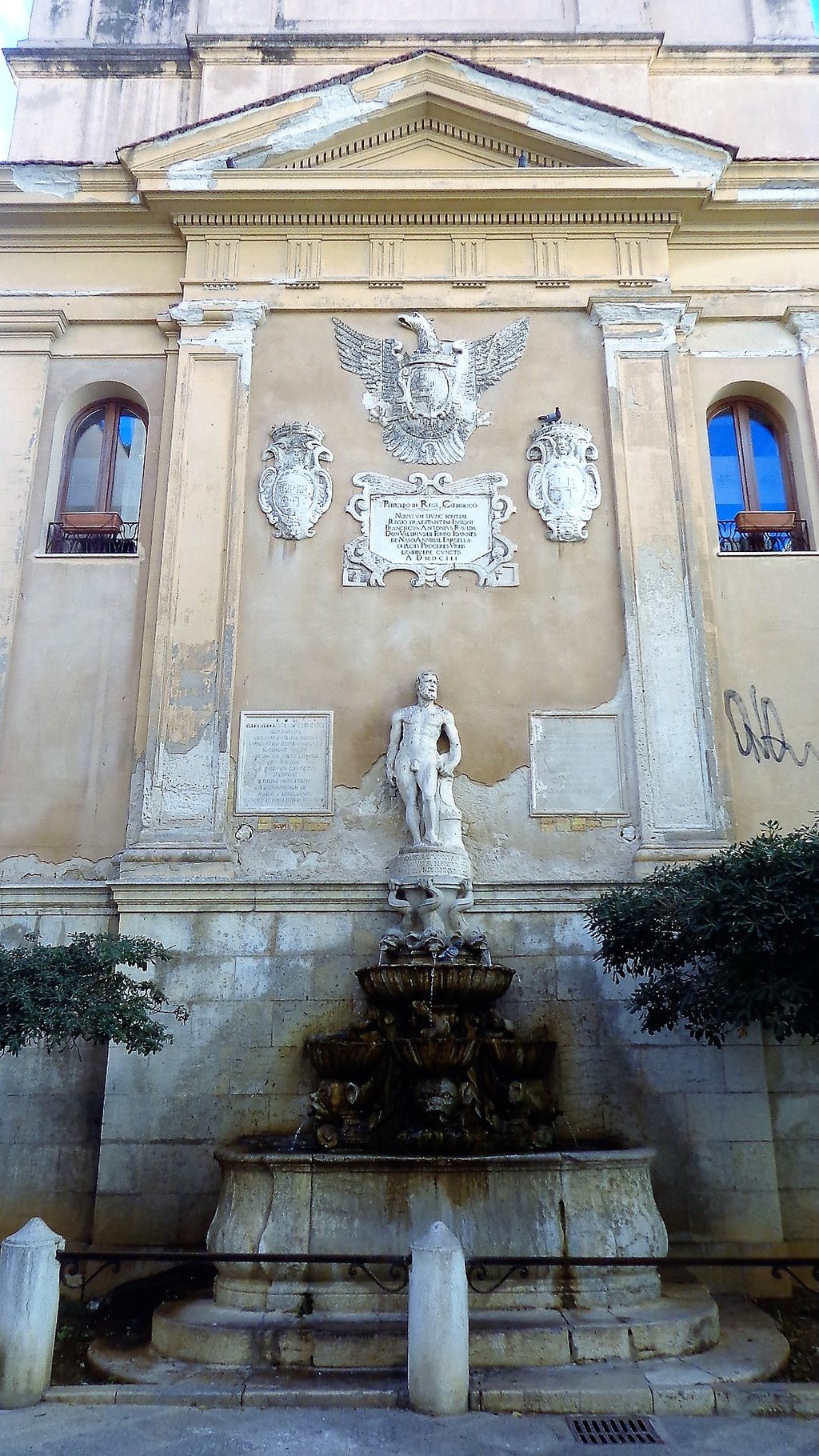 Built in 1342 at the behest of the Chiaramonte family and embellished with the statue of Saturn, the mythical founder of Trapani, it was one of the three fountains created to distribute water from the slopes of Monte Erice to the city centre’s houses.

This is one of Trapani’s oldest churches, the former Cappella dei Templari, built near to the medieval town wall. Initially dedicated to San Giovanni Battista, it was then given to the Augustinians, in the reign of Federico III. They founded a convent here. It has a Gothic gabled façade, a wide rose window composed of small, intertwined arches and a polygonal apse. Today it hosts conventions and secular performances.

The Cattedrale di San Lorenzo Martire, also known as the Duomo di Trapani, is located right in the heart of the historic centre. 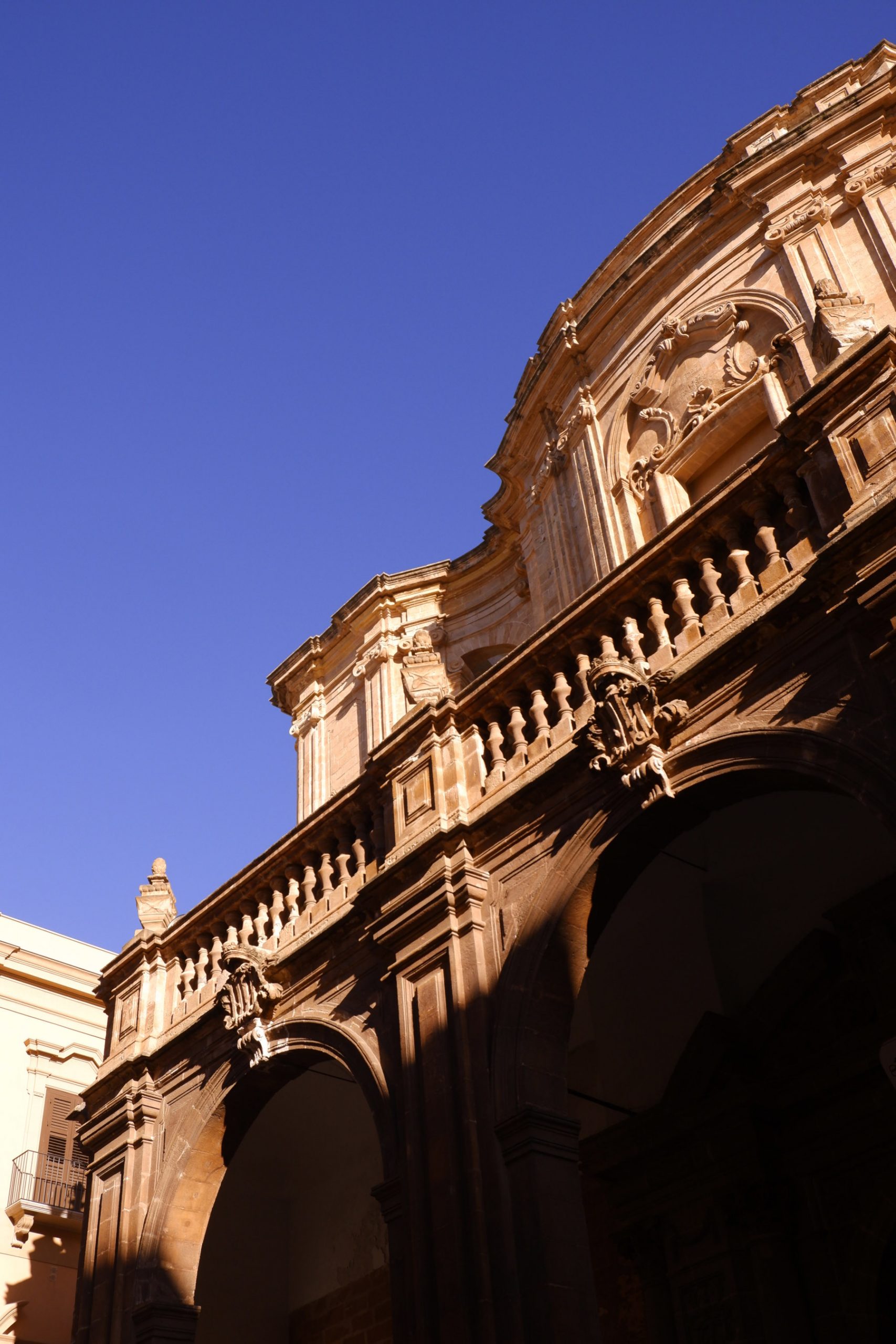 It was erected in 1102 as a chapel adjoining the Consolato dei Genovesi and was then renovated in 1639 to a plan of the architect Bonaventura Certo. The main façade of the church features a sandstone loggia which lifts the church above the level of the façade. Its plan is that of a Latin cross basilica and its three naves are each bounded by six columns and linked by arches above.

Villa Margherita is an urban park dating back to Italian unification and has been open to the public since 1889. It’s dedicated to Queen Margherita di Savoia, from whom it takes its name. Among its centuries-old trees, benches, columns with Doric capitals and marble busts, one of its attractions is an aviary with various species of birds, wood grouse and parrots. Alternatively, you can pause in the coolness of a small lake with aquatic and subtropical plants, ducks, geese and black and white swans. The park is also the site of an open-air opera house in which enjoyable musical shows are performed every summer.

Count Agostino Sieri Pepoli, a sponsor from Trapani, founded the Museo Pepoli in 1906 in the 14th-century former convent of the Padri Carmelitani, adjacent to the Santuario di Maria Santissima Annunziata.
It holds a collection of Sicilian works of art from the 13th to the 19th centuries, including sculptures from the Gagini school, and collections of the area’s figurative and decorative art, nativity scenes made by Trapani artisans from wood, cloth and glue. There’s goldwork, with jewellery from the treasure of the Madonna di Trapani, traditional Trapani silverwork, and some very highly-prized items in coral, as Trapani used to be an important centre for the production and processing of this precious stone. There are also sacred vestments, period clothing belonging to the Trapani nobility, maiolica pottery and memorabilia from the Risorgimento.
The shrine holds the marble statue of the Madonna di Trapani, a mid-14th century work by Nino Pisano.

By car, you can reach one of the world’s most incredible places from Trapani in around half an hour. This is Mozia or Motya, an island museum! The museum plunges you into the interesting past world of Phoenician sailors and Greek colonists.
The island is reached by boat, by taking a brief trip across Sicily’s largest lagoon, lulled by the boat’s gentle rocking and the boatman’s chatter. You’re sailing across the water of the Stagnone, which with its islands forms part of the Riserva Naturale Orientata Isole dello Stagnone di Marsala. The landing stage is next to the salt pans nearMarsala, around 30 km from Trapani, and is in itself a unique place worth visiting. 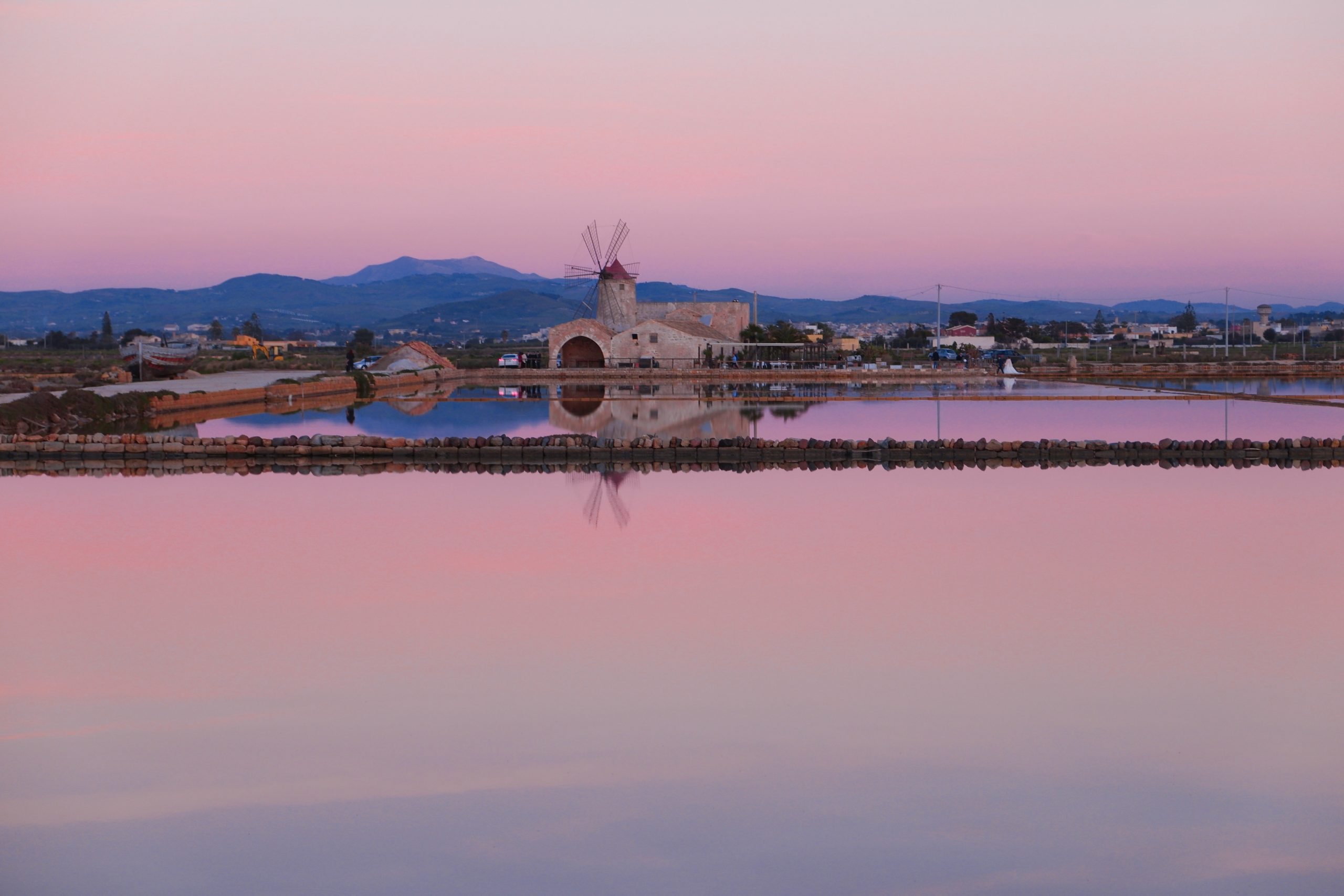 Over the centuries, thanks to the harmony of sea, wind and sun, humans have created the famous salt pans, a set of pools and canals, fortified farms and windmills where resident and migratory birds find shelter.

Don’t miss one of the Mediterranean’s most beautiful sunsets on the “Via del Sale” and sports lovers shouldn’t miss the experience of cycling between Sicily’s salt pans.

In the province of Trapani, you can explore Scopello, San Vito Lo Capo and Marsala and its surroundings.

The most typical products include the red shrimps of Mazara del Vallo, called àmmaru russu in Sicilian, caught in the Mediterranean’s waters.

Vastedda is produced in the Valle del Belice, a typical, mild, easily digested cheese with the European Union’s protected designation of origin.

The black bread of Castelvetrano is cooked in a wood-burning oven and is coffee-coloured on top with a golden-yellow interior. The black colour comes from mixture of different flours, obtained from grains and local wheat. You absolutely must try it!

Trapani sea salt bears the PGI logo, is a Slow Food product and is famous worldwide! It’s still produced according to ancient artisan techniques which require a 5 to 6-month long process and harvesting during the summer. It’s mainly produced within the Riserva Naturale Orientata Saline di Trapani e Paceco, which offers picturesque views of windmills, pyramids of salt and pink flamingos.

The history of oil and wine in Sicily also runs through Trapani. Its excellent products include two varieties of extra virgin olive oil, Valle del Belice DOP and Valli Trapanesi DOP, plus the Alcamo, Marsala and Contessa Entellina wines, produced between the province of Trapani and Palermo.

The red garlic of Nubia is famous for the intense purple-red colour of its exterior: it’s the main ingredient in one Trapani’s most well-known dishes, a pasta cu l’agghia.

From the coasts of North Africa, the sirocco wind brought couscous, the well-known unrefined wheat semolina which accompanies various tasty fish, vegetable and meat soups. San Vito is the site of the Couscous Fest, an international festival dedicated to this dish and a meeting of different cultures.

The capers of Pantelleria are harvested between May and September and are covered with salt for around twenty days: they give dishes an intense, unmistakable flavour. One of the dishes in which they’re used is the irresistible aubergine dish caponata. 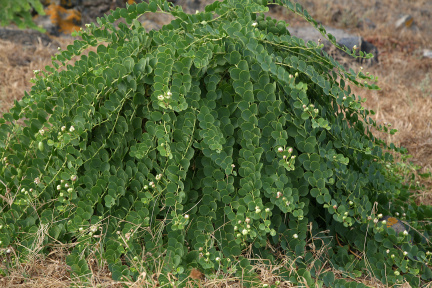