Travelogue in Sicily – western coast of the Tyrrhenian Sea

The sun has just risen and Guidaloca beach is finally to ourselves. 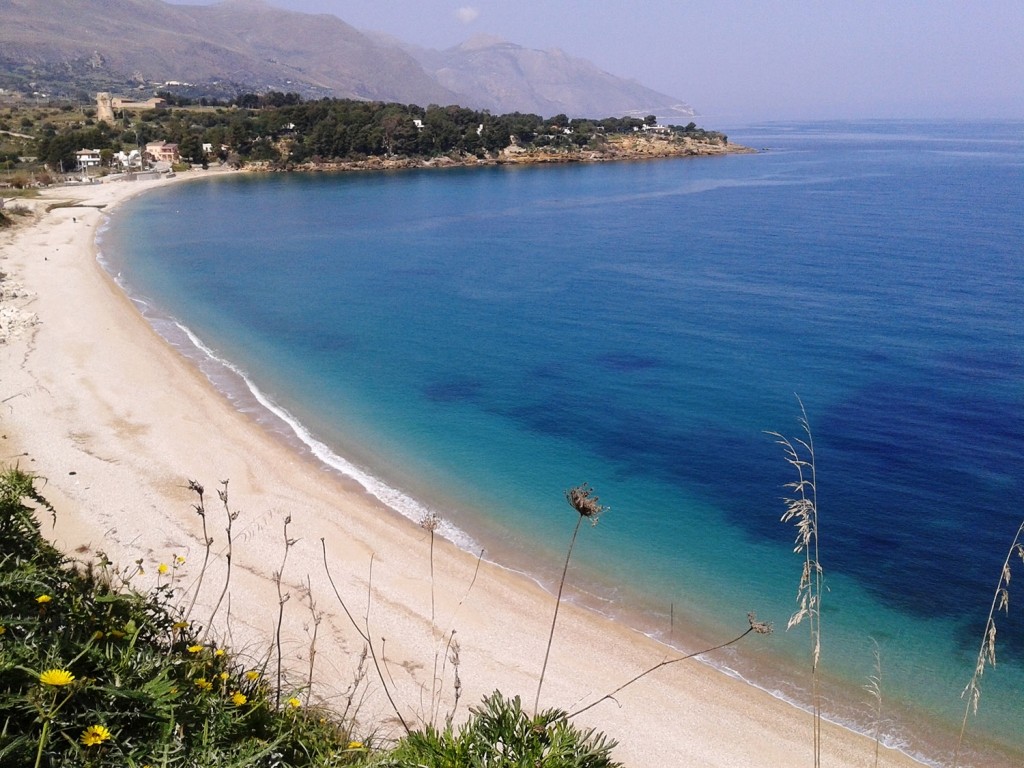 During the night the sea has polished the stones and its smell invites us to bathe. The evening before it was very pleasant to walk along the narrow streets of Scopello. After sunset, in fact, the old village conveys an evocative charm.  During the long summer days, on the other hand, maybe returning from the Zingaro Nature Reserve, you can do like us, when sitting in the shade of a fig tree, we ate pani cunzatu (homemade bread seasoned with olive oil, anchovies and tomato)  a triumph of simplicity and strong flavours. 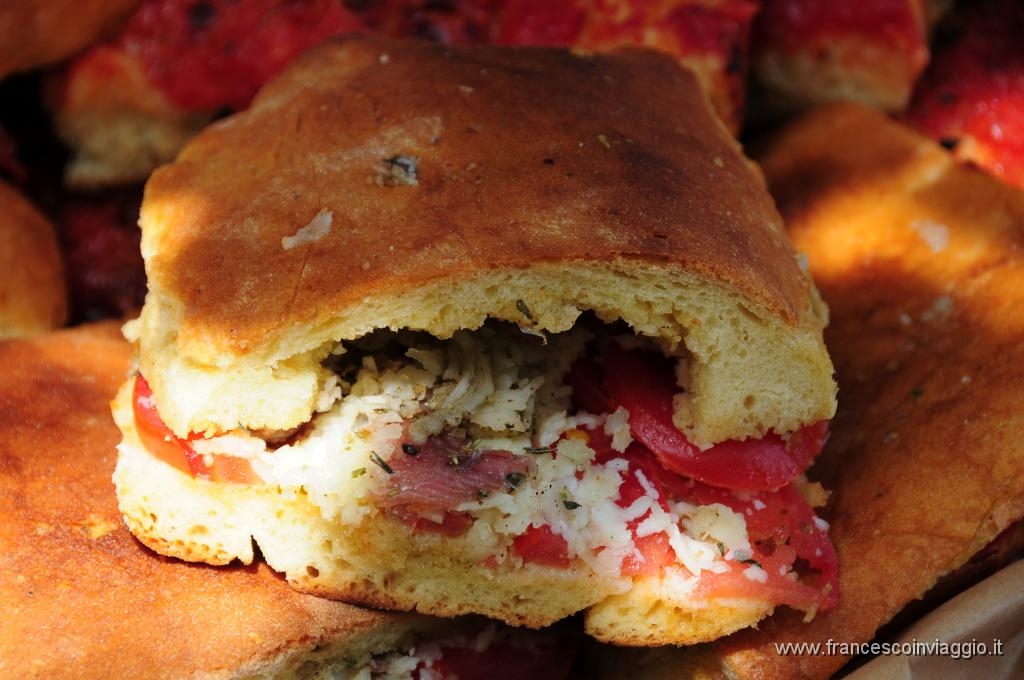 Now, after a refreshing morning swim, no sunbathing, we get moving again!

First stop of the day is Segesta, an isolated hill where the temple and the Greek theatre stand, excellently preserved. 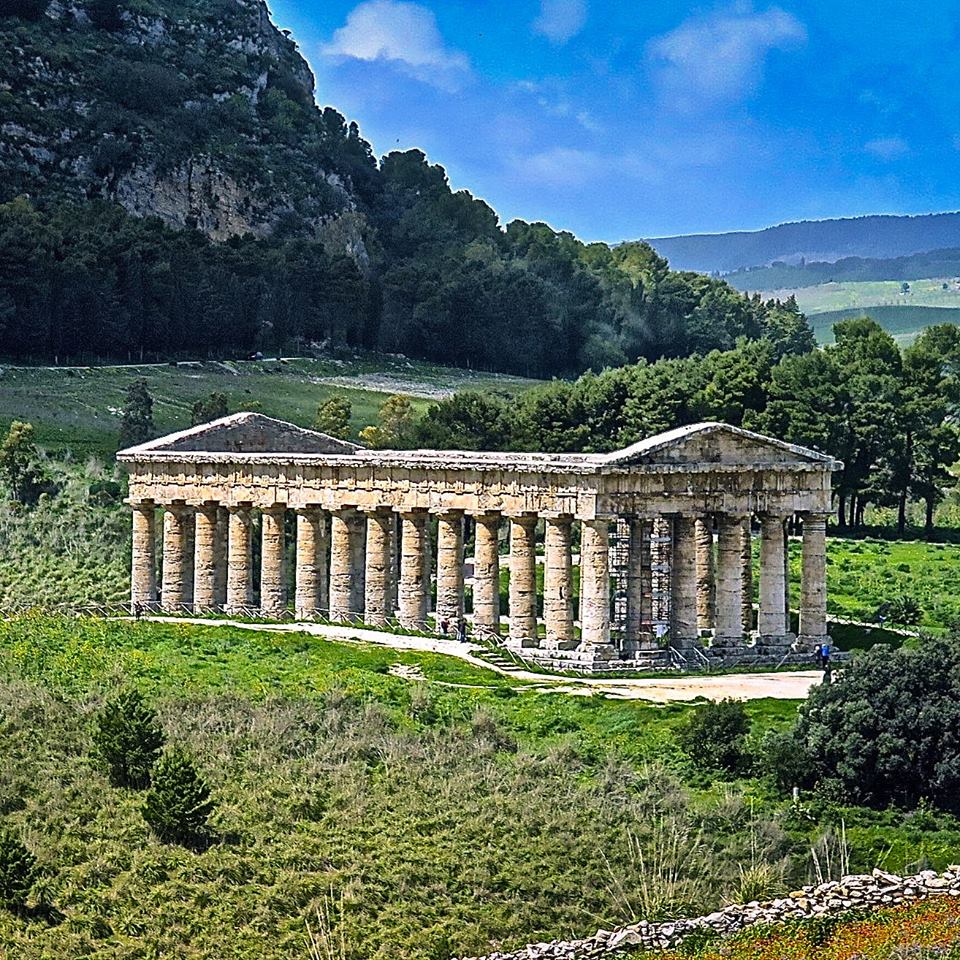 How good were the ancient Greeks in choosing the finest places to build their highest symbols! We are told that the best time to visit these places is in the early morning and that often there are theatre performances even between night and sunrise.  We promise to return here to see one of these performances. On the other hand, “return” has been the most frequently used word in our trip to Sicily.  After a meditative pause to breathe the same ancient atmosphere and rearrange ideas, we leave towards the next destination.

Until a few years ago, it was a quiet and peaceful fishing village. The trouble was that those four small white houses were located on a very wide and white beach which was more than three kilometres long and that the sea that washes its shore was warm and clear, emerald green, so it looks like a place stolen from the Caribbean. San Vito lo Capo is now one of the most popular tourist resorts in Sicily. To the four houses have been added small hotels, restaurants, cafes, shops.  The inhabitants try to balance this  development with  the safeguard of  their area. The beach is always fabulous and well equipped and it can host a large numbers of visitors. 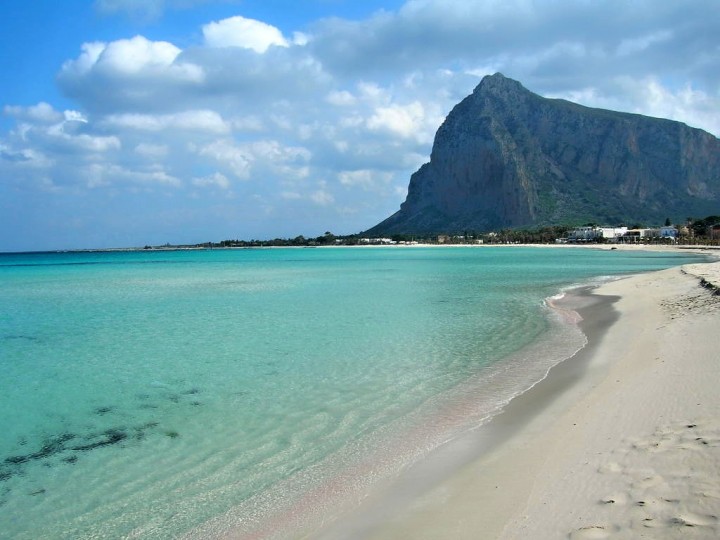 Those same guests in the evening meet on the main street to go for the evening stroll . There are two things, between one evening stroll and another, that you cannot miss: The Cous Cous* and the caldo freddo (hot-cold )**. Well, perhaps the spirit of San Vito is just this: forgetting the rest of the world. In swimwear, T-shirt and flip flops (but also barefoot) day and night going from a delicious caldo freddo to a long bath in the blue sea and then back again to the evening stroll and to the cous cous in an endless happy hour.

COUS COUS  is a famous dish of small steamed balls of semolina which arrived here from North Africa (maybe due to the Sirocco wind?) served with succulent fish soups, vegetables or various meats.  San Vito is the seat of the Couscous Fest an international festival dedicated to this dish and to the meeting of different cultures.

The CALDO FREDDO is not equally famous. It is the invention of one of the Cafe of the city centre that serves this succulent ice cream cup with liqueur, brioche, cream and melted chocolate. You can find it in almost all cafes in the town , it is up to you finding the one that has invented it. 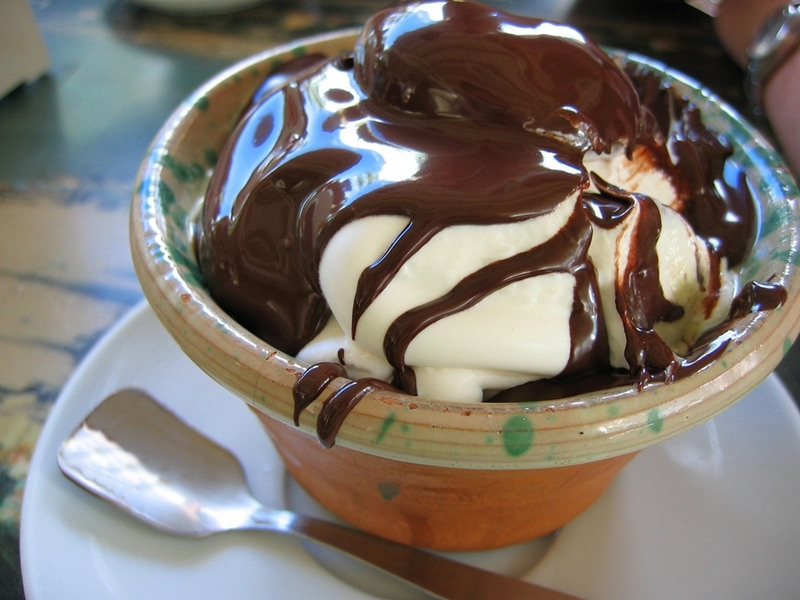 For gourmets we must also mention the cannoli made in this area, such as those of Dattilo, particularly good for their “hand made” taste and their light, friable waffle.

Now, following the sea up to Trapani, we face the great mountain of Erice. It is one of the oldest villages of Sicily, it seems that it was founded by the Elimi, the oldest inhabitants of the island, only eight centuries before Christ.  It is worth climbing those bends (but there is also a panoramic cable car) for a refreshing walk in an intimate and special setting.

Only after visiting the Belvedere garden, the medieval towers, the Castle of Venus and the Main Church, you could also explore the narrow streets so as to enjoy the famous almond sweets of Erice and buy one of the exclusive multicoloured carpets made of coloured “rags”.

Trapani historic centre is waiting for our visit, from here you can also take a ferry or hydrofoil to  the Egadi Islands, but this time we go to south, we do not want miss the Saline (Saltworks) with their typical windmills, we had seen from above when coming down from Erice. 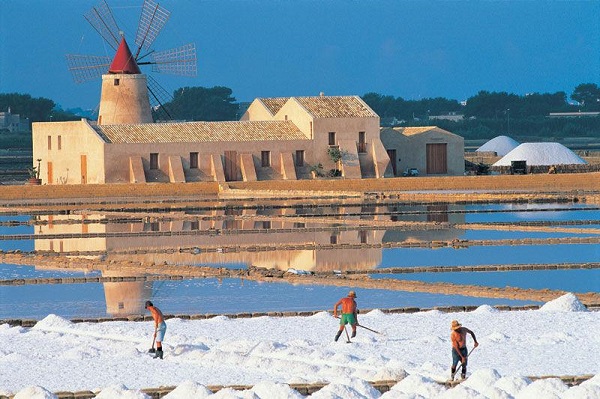 Into these large ponds water is drawn out through natural evaporation and the deposit of salt is piled up and covered with tiles to protect it from the wind. The work tools and objects of the past are preserved in the salt museum. Our programme, after the visit, is to taste the typical sea bass baked in salt after a good aperitif (some mills are also restaurants) where we are told that with a lucky sunset, we may see the colours of the sky reflected in the body of water of the saltworks.

Following the coast towards Marsala, we come across Mozia, a small island full of history. 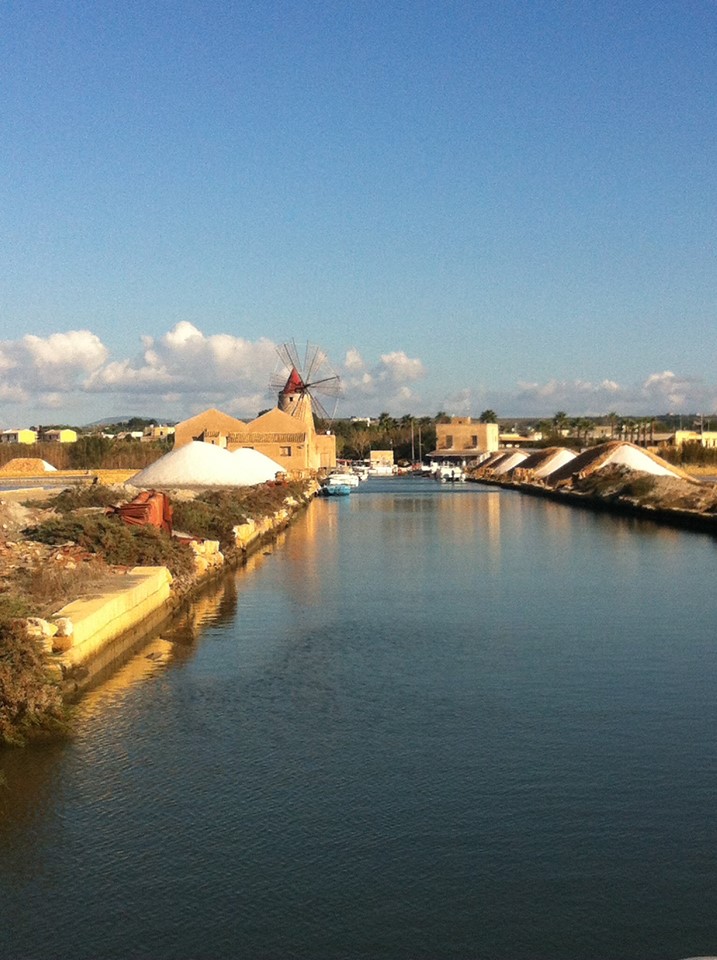 Visiting this tiny archaeological site we learn that it was actually the scene of the Punic Wars, and that it was destroyed and buried until the early ‘900, when the enthusiast English archeologist Whitaker,  discovered it, unearthing the remains of the ancient Phoenician colony.

You can reach it by boat but it takes only a few minutes. In the past, you could go by a wagon or by mule through a sort of water trail.

In its small museum, there is a sculptural masterpiece, the Kuros or  “the young man of Mozia” that not everyone knows. However, for the beauty of its fine workmanship, it is no less important than the best known masterpieces.

“If Garibaldi’s army landed at Marsala, there must have been a reason”,  this is what it seems to be written onthe faces of the proud, old inhabitants of Marsala who walk around the streets of this small and elegant city. Now we have visit the Norman cathedral of St. Thomas of Canterbury and the remains of a Punic ship at the Museum of Archaeology Baglio Anselmi.

Marsala is also the name of the local sweet, dessert wine that made this town famous. Since 2013 Marsala is a “European City of Wine.” 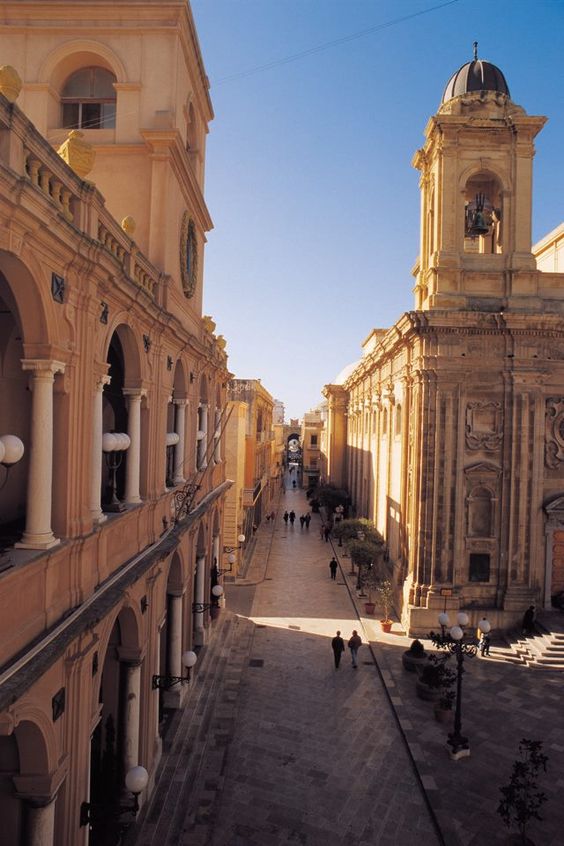