There it is, lavish and opulent, nestled at the intersection of three valleys, few kilometers from the sea, with its medieval plant and its neighborhoods full of rosy houses beneath the warm sunshine.

The city that looks like a crib, since 2002, is an UNESCO World Heritage Site, along with other 7  Val di Noto villages: its historical center is an expression of the creative genius of the late Baroque age, and the result of the eighteenth-century reconstruction after the 1693 disastrous earthquake that destroyed the whole city. The famous writer Elio Vittorini in his book “The cities of the world” wrote “It is, perhaps, the most beautiful city of the world”. 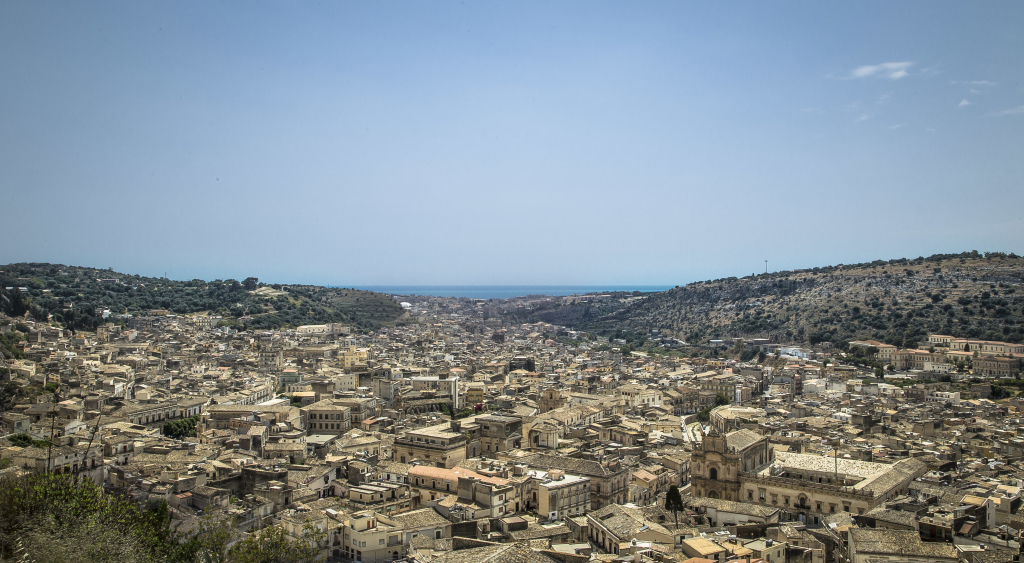 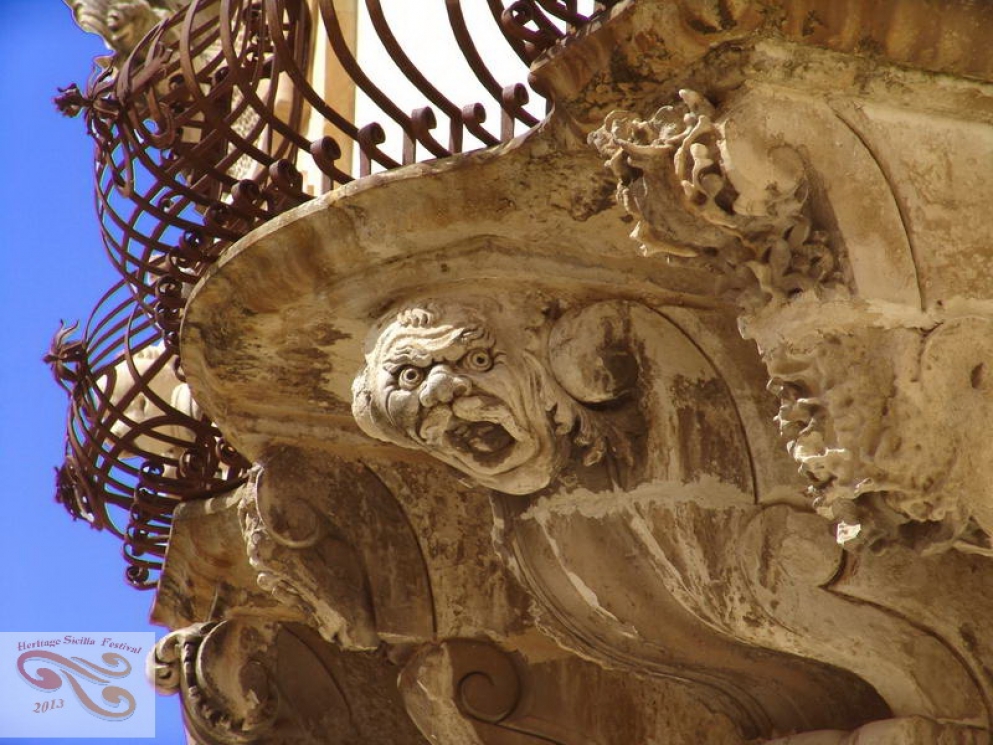 From here we arrive in Piazza Italia, surrounded by many buildings as Palace Massari, Palace Mormina-penna, Palace Iacono, Palace Scrofani, Palace Fava (don’t miss its beautiful balcony of the griffins) and by the Church of Sant’Ignazio. From Piazza Italia we can easily reach both the district San Giuseppe/Altobello with the Church of San Giuseppe, and the quarry of San Bartolomeo (natural canyon due to the action of the stream San Bartolomeo on the calcareous rock) that like a shell encloses the beautiful homonym church and from where we arrive to the grottos of Chiafura of Byzantine origin. 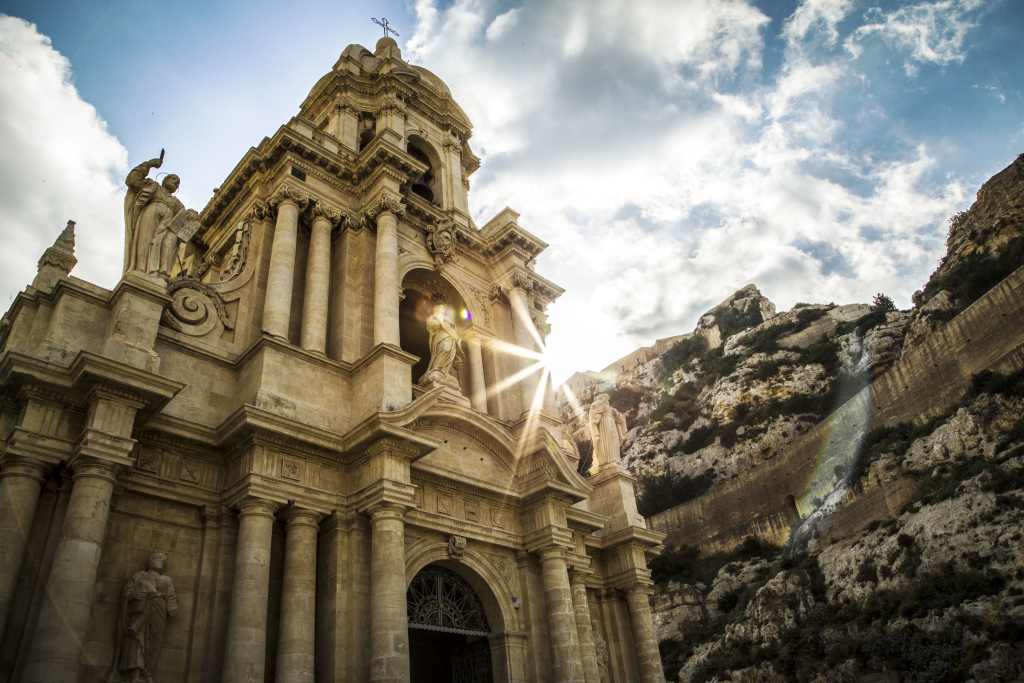 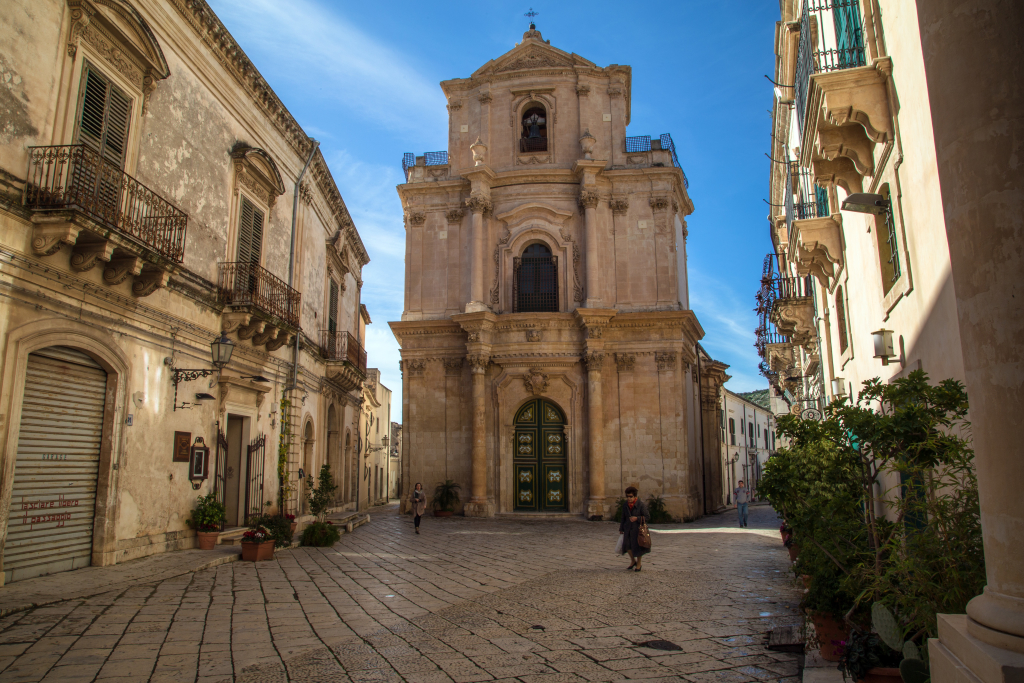 Coupled with its historic center, Scicli has another soul, the one that rests on its hills where the ancient settlement was set, before the 1693 earthquake. The mighty shape of the Churh of St. Matteo (the main church up to 1874 and the symbol of the city identity) overlooks the whole town. Still on the homonym hill, the Churches of Santa Lucia, Santo Spirito, and San Vito, besides the military architectures of the Castiddazzu (tower of the XV century) and the Castle of the Tre Cantoni or triquetro. Then there is another hill, the Croce, rich of religious architectures, also called franciscan because of the convents built by the order: the Convent of the Capuchins inside Villa Penna and Santa Maria della Croce. 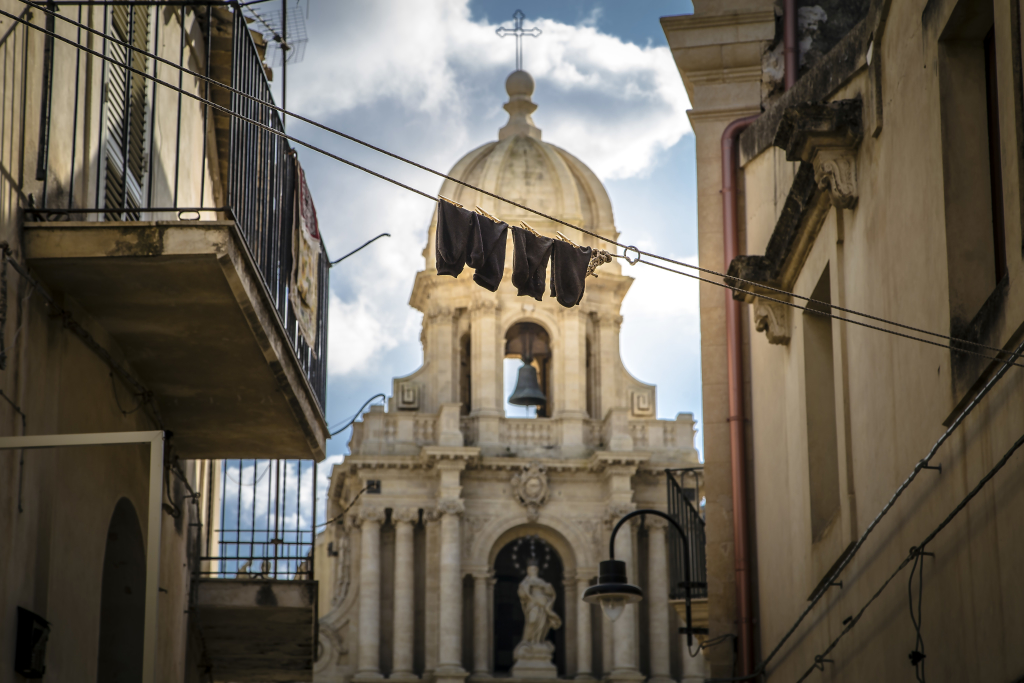 On the hill there’s also the small old church of the Calvary. Scattered all over the city, there are some small churches as the seventeenth-century Church of Santa Maria of Piedigrotta, the Church of St. Pietro, the Madonna of the Catena and the small hermitage of St. Guglielmo hermit, Saint Patron of the city.

Inside the churches and the buildings there are many paintings and frescos of rare beauty. Among them it is worth mentioning the seventeenth-century painting of Christ of Burgos, also called “Christ with skirt” because it shows a crucified Christ wearing a white clerical robe, edged with a lace band. There are no other known similar examples in Europe, but only a wooden sculpture dating back to the XIV century in the Church of Santa Maria in Burgos, in Spain. We also mention the Deposition of St. Bartholomeo by Mattia Preti. 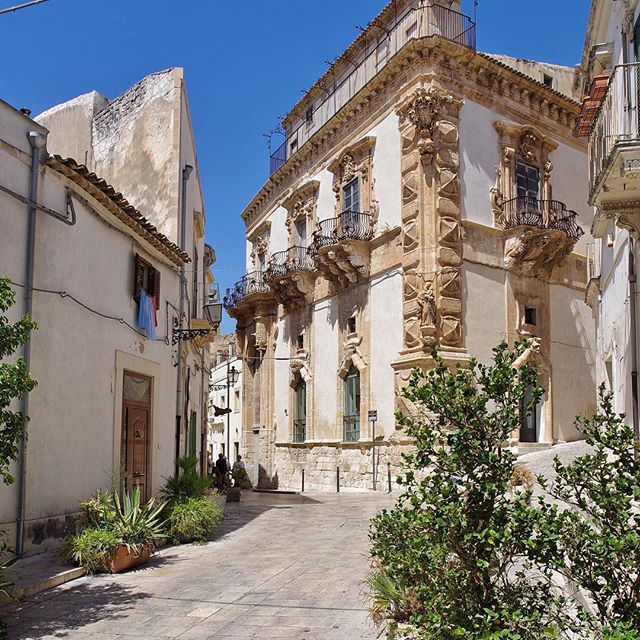 In Scicli throughout the year many Festivals and that interlace religion and folklore take place. The Spring Triptych is very important and starts with the Ride of San Giuseppe in March, an unusual Flower Festival that evokes the Holy Family’s Flight into Egypt, followed by the rites of the Holy Week, going from Palm Sunday to Easter Sunday with the Feast of Joy also called Feast of the Living Man. The Spring Festivals end with the Feast of the Virgin Warrior or Madonna of the Militia, on the last Saturday of May, whose protagonist is the unique Madonna not only riding, but also with a sword in her hand, who helped the people of Scicli and the Normans fighting against the Saracens during the battle of Micenci in 1091. The core of the party is the commemoration of the events leading up to the battle in which the Virgin appeared  riding a horse.

All three spring festivals are World Intangible Heritage since 2011 along with the little Songs to the Immaculate Conception and the landscape of the Hyblaean countryside, characterized by dry stone walls and carob trees.

Scicli is also one of the hubs of the contemporary art in Europe. In the city there is a school of painting and sculpture, called Group of Scicli, which includes primarily Piero Guccione and Franco Sarnari, then Franco Polizzi, Carmelo Candiano, Sonia Alvarez, Giuseppe Puglisi, Salvatore Paolino, Giuseppe Colombo and Pietro Zuccaro. Some jobs of these local masters are permanently exposed at Palace Spadaro in Via Francesco Mormino Penna.

Scicli means also sea! Twenty kilometers of coastline, eighteen of fine beaches, crystal clear sea and four fishing villages. From west to east: Playa Grande, Donnalucata, Cava d’Aliga and Sampieri. Playa Grande is bordered to the west by the WWF Reserve Macchia Forest River Irminio. Donnalucata is the most ancient and great beach; its name comes from the Arabic “Al-Ayn-Awqat”, which means source of hours as a source of fresh water flowed on the beach five times, just like Muslim prayers.

You can’t miss the Sanctuary of the Madonna of the Militia and Mormino Palace . In Sampieri, a small nineteenth-century seaside town, there is a beautiful, half moon shaped beach that culminates to Punta Pisciotto overlooked by the shape of Furnace Penna, a brick factory built in 1912 and abandoned in 1924. It is a wonderful example of industrial archaeology, a real “Cathedral of the Sea”. Sampieri is the destination of many famous visitors as Guttuso, Pasolini and Carlo Levi in the past and, nowadays , Guccione, Sgarbi, Giorgio Armani and Roberto Benigni who has called it a slice of heaven. 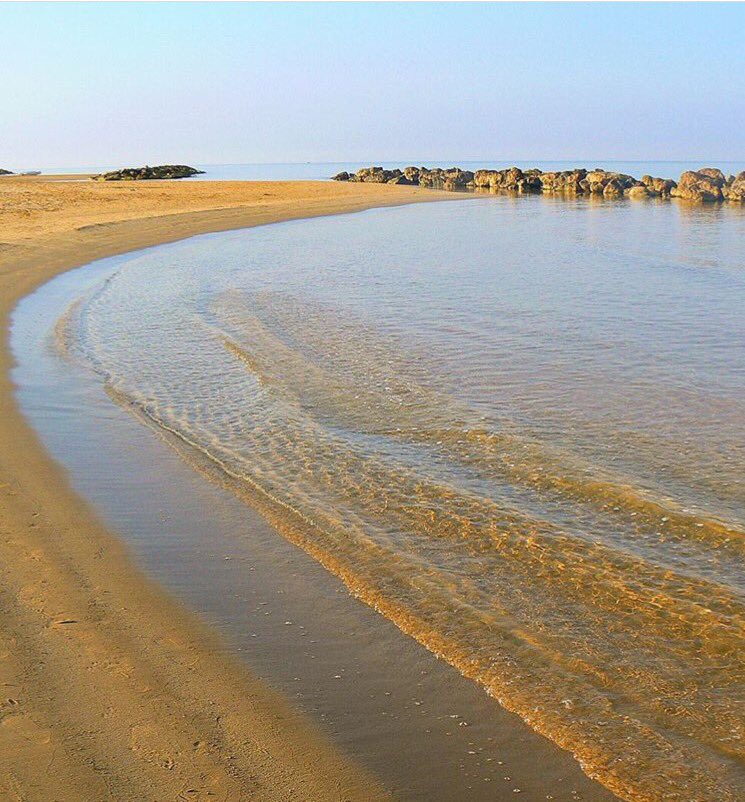 Since 1999 Scicli is the main location of the Rai 1 fiction “Il Commissario Montalbano” and, since 2012, of “Il Giovane Montalbano.” In the fiction Scicli has become Vigata, and the main set is Via Francesco Mormino Penna where Montalbano’s hurtling car is parked in front of the the Town Hall, become, for the occasion, the Commissioner of Vigata,.

Other location are the terrace of Piazza Carmine, the Church and the Quarry of St. Bartolomeo, Palace Iacono now changed, in its external side, in the Palace of the Pretura, Piazza Armando Diaz, the complex of the Madonna of the Rosary, Via Duca degli Abruzzi. In the villages we find the port of Donnalucata and its seafront, now the promenade of Marinella. In Sampieri, near the Fornace Penna, there is the Mannara, a rough place of crimes and prostitution, that was the set of the episode “The smell of the night” in Montalbano fiction.