The rediscovery of Akragas began towards the end of the eighteenth century, when the first European travellers reached Sicily, discovering an unexpected and immense artistic, archaeological heritage.

In a almost enchanted valley, full of almond trees in bloom, it is the most impressive group of monuments of the Hellenic architecture in Sicily. The unique charm of this site is in this blend of cultural environment and natural landscape.

The Valley of the Temples is certainly the most important testimony of the ancient, classical culture of Sicily. It brings together the temples of gods goddesses as well as the area of the necropolis and sanctuaries outside the walls. 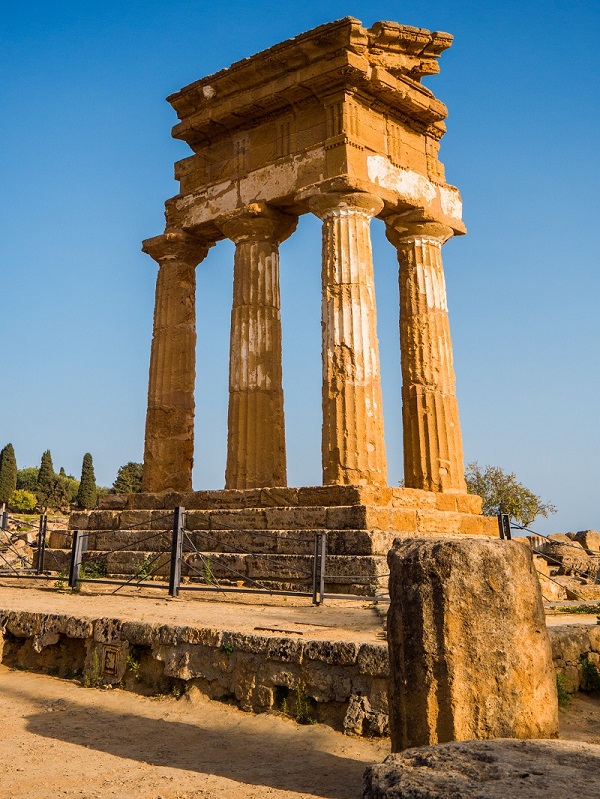 The temple of Castor and Pollux (Dioscuri),  the legendary twin brothers, born from the union of Jupiter and the queen of Sparta, nowadays has only four columns left and has  become the symbol of Agrigento. 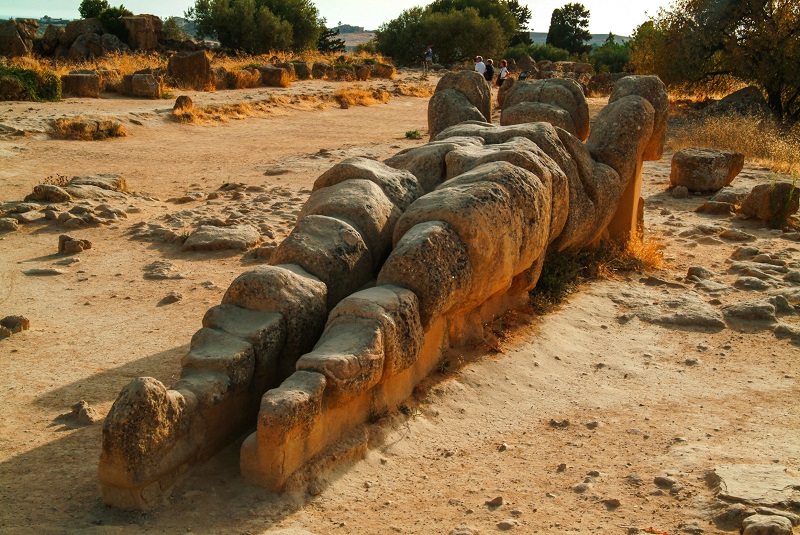 The temple of Olympian Zeus (Jupiter) was built to thank Zeus on the occasion of the Agrigentines’ victory over the Carthaginians, in 480 BC .  Here are the famous atlases, some gigantic statues with human shape, once used as columns o pilasters.

The Temple of Concordia, also built around the 5th century, is located along the via Sacra and is one as well of the best preserved temples. In the sixth century it was transformed into a sacred building. The name Concordia comes from a Latin inscription found near the temple itself. 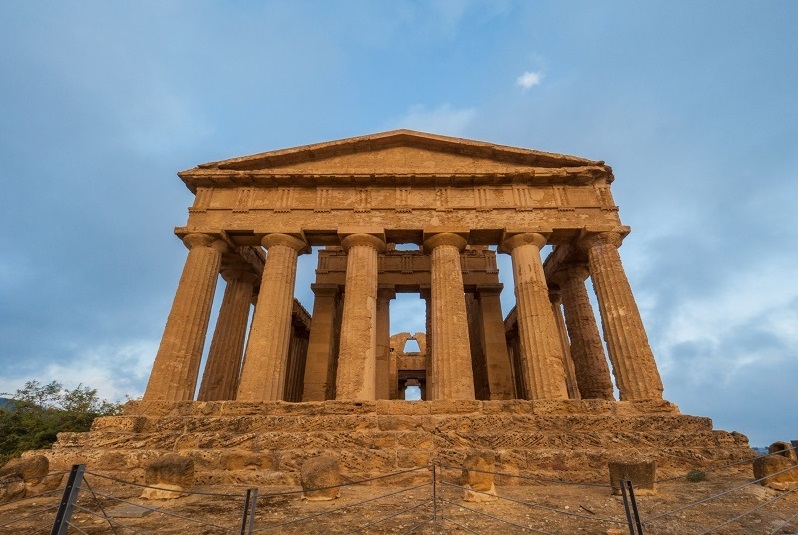 In front of the Temple, you can admire the statue of Icarus, donated by the Polish sculptor Igor Mitoraj. The statue represents the Fall of Icarus, who disobeyed his father Daedalus, he flew too close to the sun, burned his wings of wax and fell into the Mediterranean. 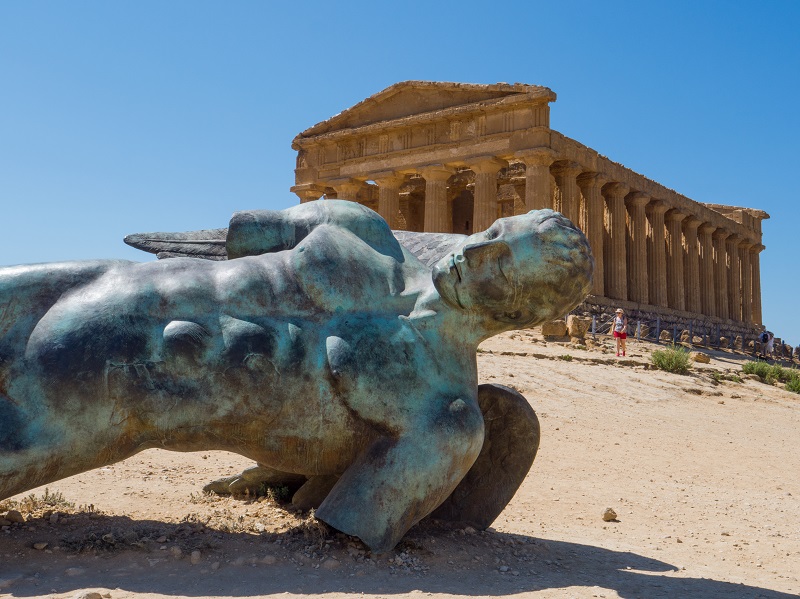 The temple of Heracles (Hercules) is the oldest one.  Inside it kept a bronze statue of Hercules himself, which  the Akragantines loved very much.  The temple, destroyed by war and natural disasters, today has only eight columns left. 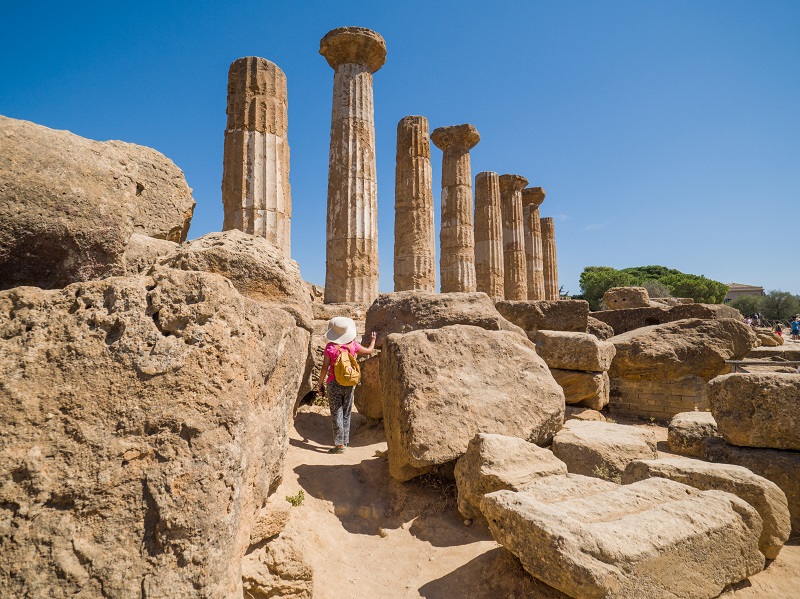 The tomb of Theron, near the Golden Gate, is an imposing pyramidal monument made of tuff stone. It was built in memory of the fallen of the Second Punic War.

The temple of Vulcano whose ruins suggests it once was an imposing building, dates back to the fifth century.  In its foundations, the remains of an archaic temple were found. 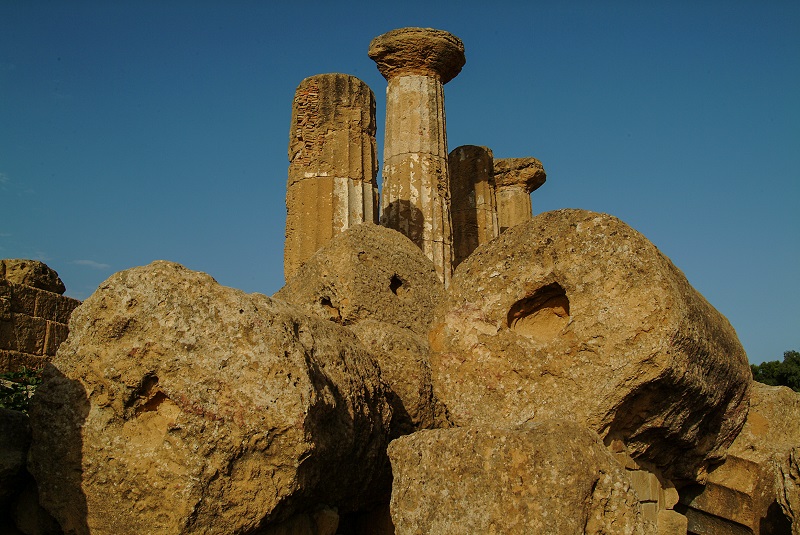 The temple of Juno (Hera Lakinia) – Its name, like that of the nearby Temple of Concordia, is conventional as a result of a wrong interpretation of a Latin inscription that  aligns it with the temple of Hera, in Crotone. Placed spectacularly in the easternmost part of this  magical hillside, it housed the cult of the goddess of fertility. The traces of fire, amazingly still visible in the walls of the cell, remind us of 406 B.C. when this magnificent temple, almost identical to that of Concordia, was destroyed by the Carthaginians. Nearby, there is also a clearly visible big altar for sacrifices (in the East side) and a section of street deeply furrowed by carts coming from the city’s  “Gate III”.

The Map of Regional Museums and Archeological Parks in Sicily