“Caltagirone, high above the hill that swirls up to heaven…[…]”

Consolo’s description tells about this part of the Sicilian ancient hinterland, situated on the Erei mountains, between the plain of Gela and that of Catania, bloomed over the clay cracks, in its settlements dating back to the Paleolithic era.  The people of Caltagirone produced pottery already ten centuries before Christ, as evidenced by a beautiful attic Krater (V century) reproducing a potter working at its lathe, kept in the Museum of the Ceramics.
Under the Arab rule the town took the name of Qal ‘at al Gharùn meaning “Fortress of Jars” with reference to the processing of clay.

The local artisans had the luck to get the raw material directly from the clay caves and to collect the firewood for their furnaces from the near wood Santo Pietro, so they quicly became the most important ceramics producers of the Island.
The pottery decorums seem to be inspired to the splendid art of weaving and to the Sicilian embroidery. 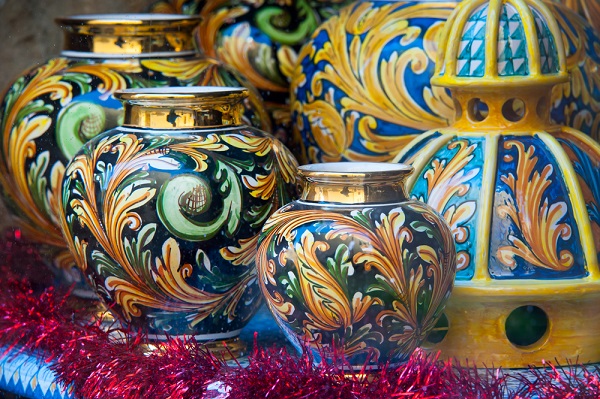 The XV-XVII centuries are considered the golden age of “The City of Ceramics” that is embellished with churches, institutes, colleges and convents. Along with the Jesuits comes the first University which offers lectures of jurisprudence, philosophy and medicine and a new, important hospital, the best of the island, is built in the town.

In 1693 a catastrophic earthquake destroys Caltagirone and many other villages in the Val di Noto: a huge tragedy that kills about 100 thousand people.

In the early 800’s the flourishing activity of the figurines starts; Giacomo Bongiovanni began to represent on clay faces and actions of commoners, farmers, shepherds, performers and brigands. He literally “sewed” very thin layers of clay upon “naked” figurines. Almost unknowingly,  Bongiovanni depicted the same subjects and themes loved by the realist writers as Verga and Capuana. 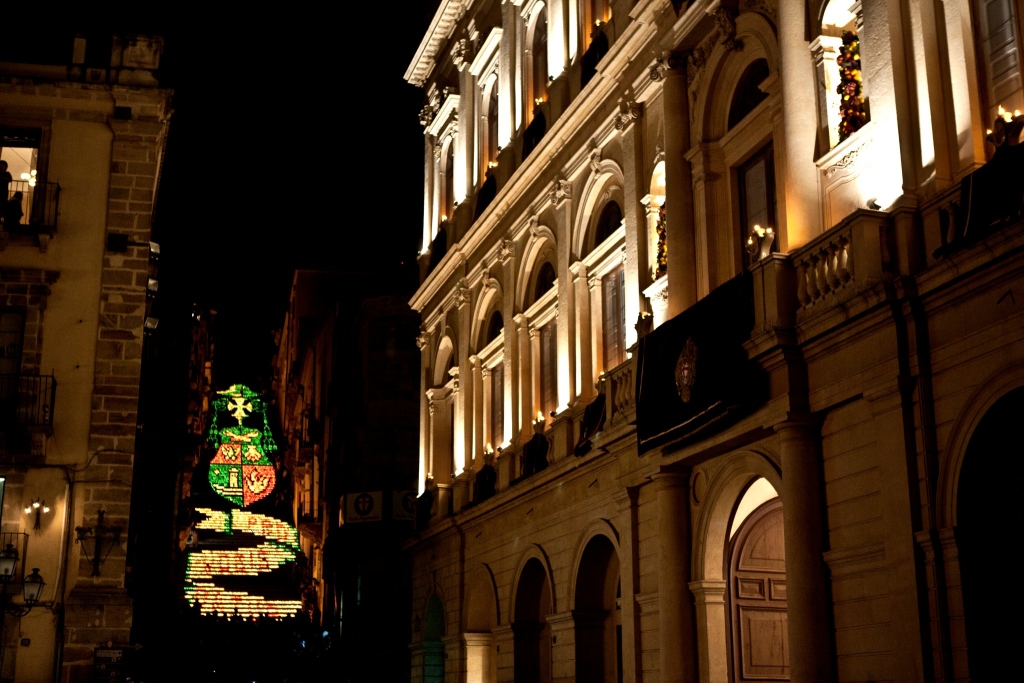 The city has lots of attractions that capture the visitor’s gaze at every corner: the wonderful  Public Gardens, the smart noble palaces. In the historic center there is the great central Square, once called Malfitania, where we find the former  Senatorial building and the former  Theater Garibaldi, today known as  Sturzo  Gallery and the old  Monte di Pietà (pawnshop).

All around, many noble buildings among which the Palace Crescimanno of Albafiorita where Ferdinando di Borbone and his wife were hosted during their visit to the city in the early 18th century. And furthermore, the Libertini Palace of San Marco, with its beautiful internal staircase,  once the bishop’s seat during his first settlement, the scenic church of the Jesuit college and the Cathedral of Saint Julian, of Norman origins, with its magnificent Liberty façade and its tall bell tower.Further on,  the seventeenth-century seat of the Court of Justice Captain and, in front of it, the majestic municipal building, former residence of the Princes Interlandi of Bellaprima. Among the others, the palace Guttadauro of Reburdone and Maggiore of Santa Barbara, along the St. Bonaventure Street,  as well as the residences of Emanuele Taranto and Bonaventure Secusio, which contributed so much to the history of the city together withh Don Luigi Sturzo and Silvio Milazzo.A little bit further, the Church of San Bonaventura, with its tromp l’oeil frescoes.

It is quite impossible to make a list of the countless churches and convents that once existed in Caltagirone: amazing its narrow streets, here called “carruggi” – as in Genoa – reminding the Ligurian colonies that settled in the city and along with the Catalan, Amalfitan, and Jewish families, influenced the city’s art and architecture.

It’s enough to mention the Flemish table by Vrancke van der Stockt, now kept in the Diocesan Museum, and the several vestments, paintings and frescoes in its numerous churches.
But the reason why the city is particularly famous, is to be found in the phantasmagorical colours and glazing of its pottery blooming in every street, alley and corner of the city. 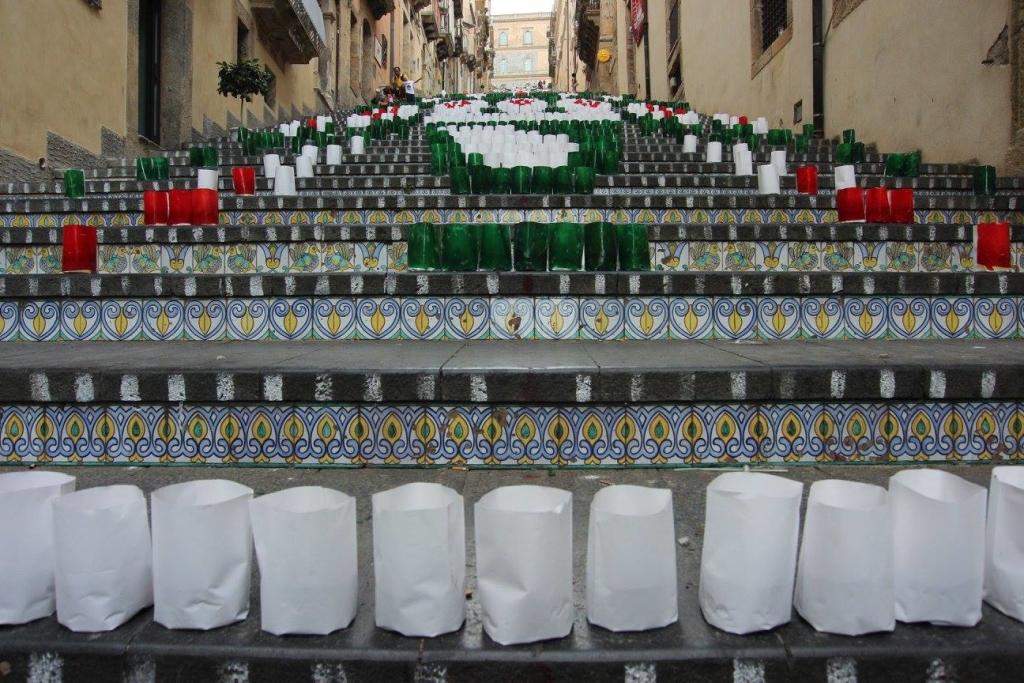 And what about the beautiful ceramics stairway, with its 142 steps – almost a symbol of the last ten centuries ceramics history – that leads us the top of the hill for enjoying a spectacular view. Up there, in the old fortified district, once surrounded by walls defending the medieval area, the ancient Church Matrice dedicated to Santa Maria del Monte, from which the staircase is named.

In May the stairway becomes “flowered” in honor of the Madonna; by the end of July  it is illuminated by thousands of coloured oil lamps (coppi) on the occasion of the feast of the Holy Patron, Saint Giacomo, when a parade of horses and livery carriages goes around the city, and finally during the nid-August nights.

Caltagirone has a rich culinary tradition famous for its typical sweets, linked to the traditional festivals, such as cuddureddi (honey , almonds or mulled wine biscuits) ore the ancient bread and egg pans and the cubaita of chickpeas, some true, Baroque architectures. 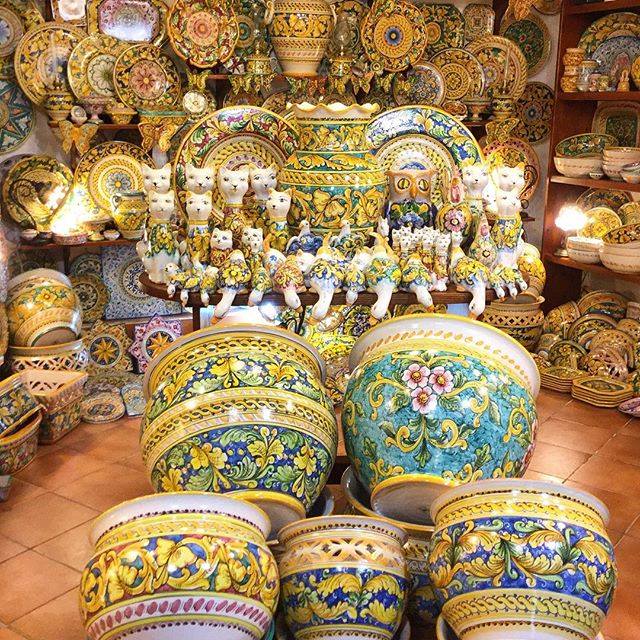 The city is not far from other famous sites such as the Villa Romana del Casale, in Piazza Armerina, and Morgantina, and from the late Baroque and Renaissance cities like Vizzini, Licodia Eubea, Mineo, Militello Val di Catania, or from Grammichele with its marvellous hexagonal square. It is also close to Ragusa and to the airport of Comiso.