Cosmopolitan, exuberant, eclectic. Catania is a multicoloured universe, from the glittering whiteness of its Baroque stuccoes (a UNESCO World Heritage Site) to the lava black of the Liotru, the elephant sculpted from basalt that greets us in Piazza Duomo in the heart of the city. 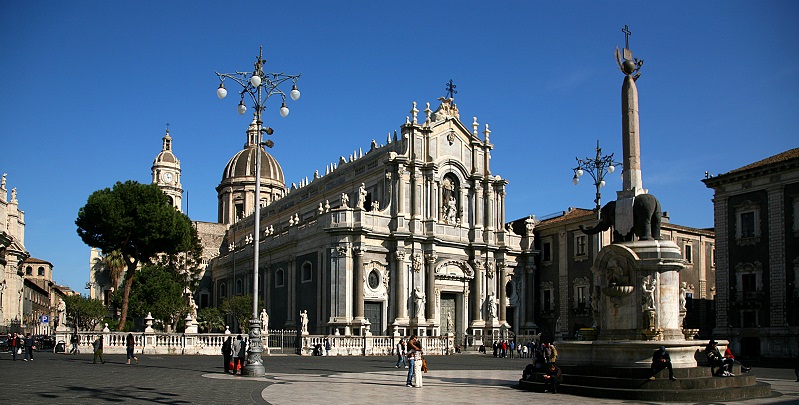 But we mustn’t waste time! Here are ten sights not to be missed in and around the city.

This is the city’s most important palazzo and a symbol of Catania’s Baroque architecture.

Following a devastating earthquake, the building was rebuilt by Ignazio Paternò Castello III, the fifth prince of Biscari, a great scholar, archaeologist and lover of the arts, who not only made it his home, but also established the first major Museum open to the public, containing his great archaeological collection.

It was here that the prince received Goethe during his European Grand Tour, who later described the magnificence of the collections and the palace in detail in his writings. History, charm and beauty all come to mind when describing the building. 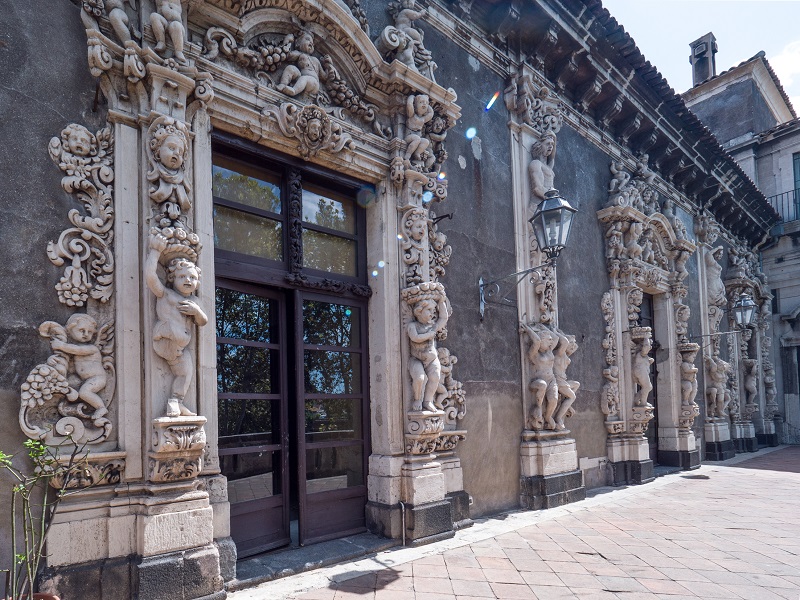 The palazzo is accessed via a large gate on Via Museo Biscari, which leads to the central courtyard, adorned with a large double-ramp staircase. Its interiors include the rococo ballroom with its complex decoration of mirrors, stucco and frescoes.

Today, as well as being the home of the Biscari family, it is also the venue for cultural and prestigious events and, with prior booking, you can visit the palazzo and listen to stories of its past and its families, told by the descendant of the princes himself.

Behind the cathedral in Catania, a tunnel created in the city walls built by Charles V houses the fish market; it is partly covered and partly in the open air. A place where every day, under the big red tents and on the white marble stalls, the ritual of selling fish, meat and fruit has continued since ancient times.

The shouts of the vendors, the stalls with steaming roasted peppers and tripe sold to passers-by make it one of the city’s most emblematic landmarks, the ideal place in which to immerse yourself in Catania’s popular and fascinating culture. But also (and above all!) to immerse yourself in Sicilian street food! 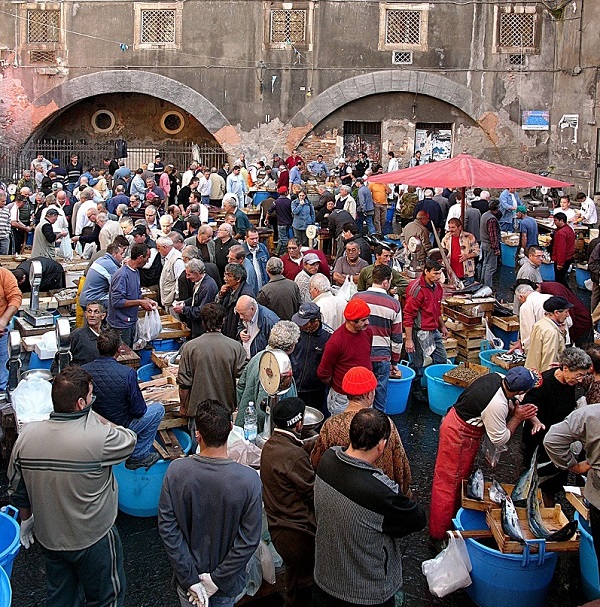 A UNESCO heritage site in Catania, it is one of the city’s symbols, recognisable by the arch that opens onto Via Crociferi. 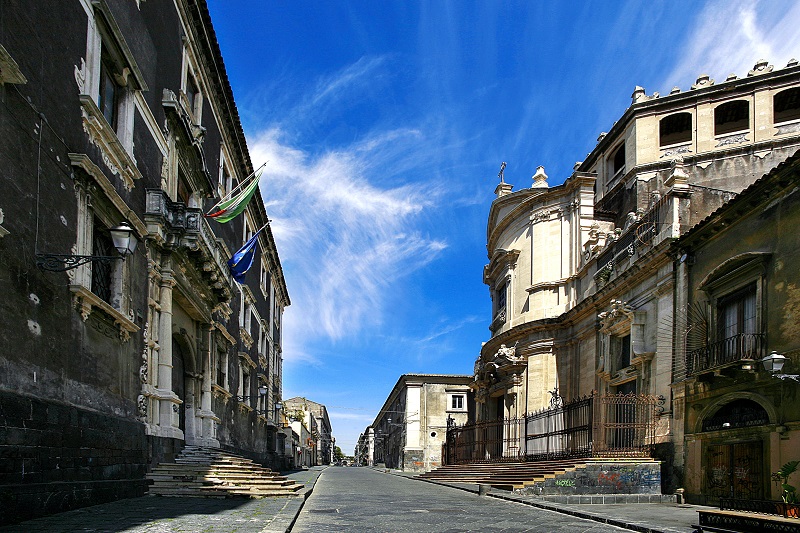 The monumental monastic complex is now, after centuries of absolute and impenetrable seclusion, a historic and artistic site that offers visitors a cultural tour, a synthesis of an extraordinary combination of history, art and contemporaneity.

Observing a respectful consideration for the cloistered nuns who still live in the Monastery, visitors can enter with a guided tour to admire many magnificent works of art. These include the ancient 18th-century parlour, the set of Franco Zeffirelli’s film “Storia di una capinera – ‘Sparrow’ in the English title“, based on the novel of the same name by Giovanni Verga; the Church of San Benedetto and its imposing entrance staircase, known as the Scalinata degli Angeli – Staiway of the Angels; the Sicily Museum of Contemporary Art (MACS in its Italian acronym), located in the Monastery’s smaller abbey.

At a 10-minute walk from Catania Cathedral you will find the Monastery of San Nicolò l’Arena, a jewel of late Sicilian baroque architecture and one of the largest Benedictine complexes in Europe.

The monastic building, a UNESCO World Heritage Site, is home to the Humanities Department of the University of Catania. It houses a Roman domus, cloisters and a splendid hanging garden.

The Monastery is a unique place that recounts the human and historical events of Mount Etna’s city, from antiquity to the present day. A daily preset itinerary is open to all, with extra activities comprising guided tours outside regular hours, theatre and music performances, children’s workshops, cookery courses, workshops and events. 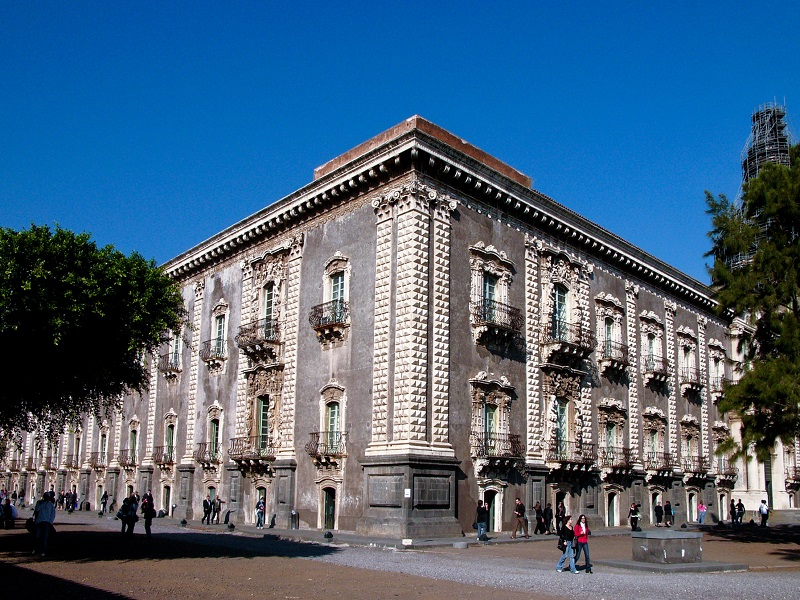 Let’s stop at a cioscu (or better still “u’ciospu” in the local dialect) to pay homage to an ancient but enduring Catania tradition. These kiosks are identitary meeting places, a form of “popular institution” that encapsulates all of Catania’s history. They are refreshment and meeting points in the neighbourhoods, both by day and by night – a universal symbol of daily life in this city.

We find them in Piazza Roma, Piazza Cavour and Piazza della Borsa, to name but a few in the city centre, but the most famous are those in Piazza Umberto, a stone’s throw from the Fera o’ Luni, Catania’s market.

The history of kiosks dates back to the end of the 19th century, when circular wooden structures began to appear in the corners of the city in the shade of trees. From the window-like openings, the vendors offered passers-by “acqua e zammù“, water with a few drops of aniseed extract.

Today, the kiosks have become cult places, nighttime haunts where you can end your evenings out on the town with a delicious refreshing drink from the kiosk, even in the middle of the night!

Today, natural plain water is mixed with sparkling water from the slopes of Mount Etna, syrups and soda. Catania’s “cioscari” compete to make their products more inviting, often producing syrups made with Sicilian citrus fruits to make mandarin and tamarind drinks, the famous “orzata”, or the famous “sciampagnino” (citronette with water and soda), and the “completo” (orzata, fresh lemon juice, aniseed and soda). The traditional drink is made from freshly squeezed lemons, soda water and a generous spoonful of salt: the effect is highly thirst-quenching and digestive.

Catania’s wonders are not all bathed in sunlight. Mount Etna most certainly played its part, with its rivers of lava that over the centuries have repeatedly covered the signs of the City’s past, artefacts that remain slumbering beneath the chaos of the city. 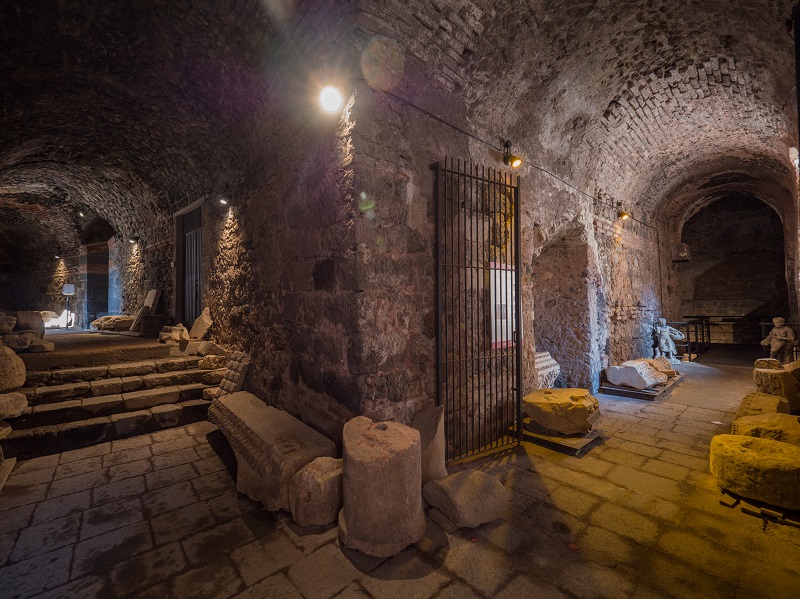 In short, under Catania’s “basule“, layers of ash extend as they have done for ages, chronicles of the city’s thousand-year history, with its streets, churches, baths, palazzi and even road signs.

At numerous spots, you can descend into the depths, in whose darkness, far from indiscreet eyes, nuns and monks engaged in amorous affairs and bandits hid from justice.

The 3rd, 4th and 5th of February are the high point of the of St. Agatha commemoration event. The three days of worship are preceded by a month of intense preparations, during which Catania gathers with great faith and devotion around its Saint. But this is also the third most popular religious festival in the world in terms of participation of the faithful, after the Holy Week in Seville, Spain, and the Corpus Christi festival in Cuzco, Peru.

Counting the faithful and visitors, up to a million people visit the city every year. 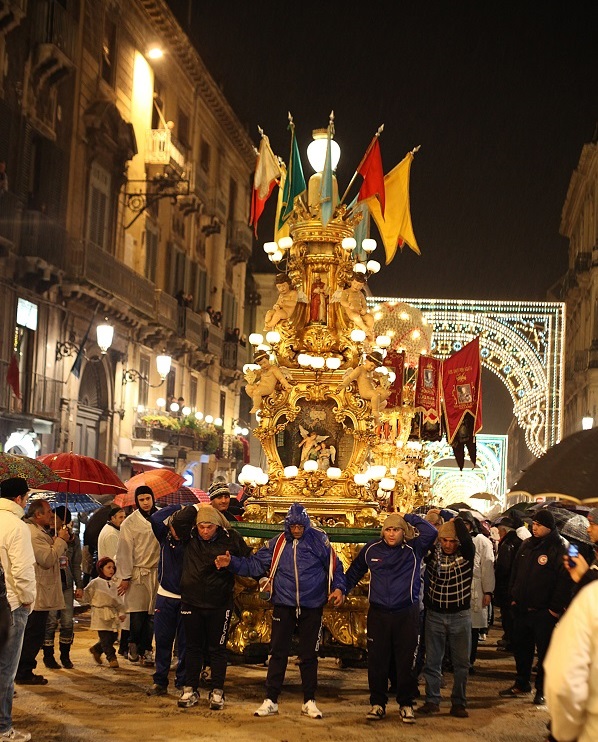 The procession retraces the sites of the martyrdom and the oldest roads in the city, with the parades featuring the “Candelore“, monumental, richly decorated candlesticks, carried on the shoulders of the devotees in their typical white sack vestments, to the cry “All ye faithful, all citizens, long live Saint Agatha“.

The spectacular fireworks remind Catania’s townspeople that Saint Agatha is always there to watch over Mount Etna’s fire.

The counters of all Catania’s pastry shops are full of sweets linked to the history of the virgin, patron saint of Catania: the “Cassateddi di Sant’Aita“, also known as “Minni di Sant’Aita“, and the “Olivette”. The former refer to the martyrdom and brutal severing of the girl’s breasts at the hands of the Roman emperor Quinziano for refusing his love and deciding to consecrate her life to the Christian faith.

The little olives, on the other hand, refer to the legend according to which the young girl, pursued by Quinziano’s guards, while stopping to rest and bending down to lace up a stocking, saw an olive tree growing out of nowhere that protected her from the guards’ view and gave her its fruit to feed herself.

This is an ideal itinerary for those who want to enjoy an unusual experience and admire the scenic beauty of the Etna Ionian Riviera.

With their natural and historic points of interest close to the city, let’s explore the picturesque coastal villages near Catania.

From San Giovanni Li Cuti and its small port of Ognina to Acitrezza, passing through Acicastello and, in the Acireale area, from Capomulini to Santa Maria La Scala, passing through the splendid Timpa Nature Reserve with the evocative and silent Chiazzette and the hamlet of Santa Caterina, from you can enjoy splendid and evocative seascapes. 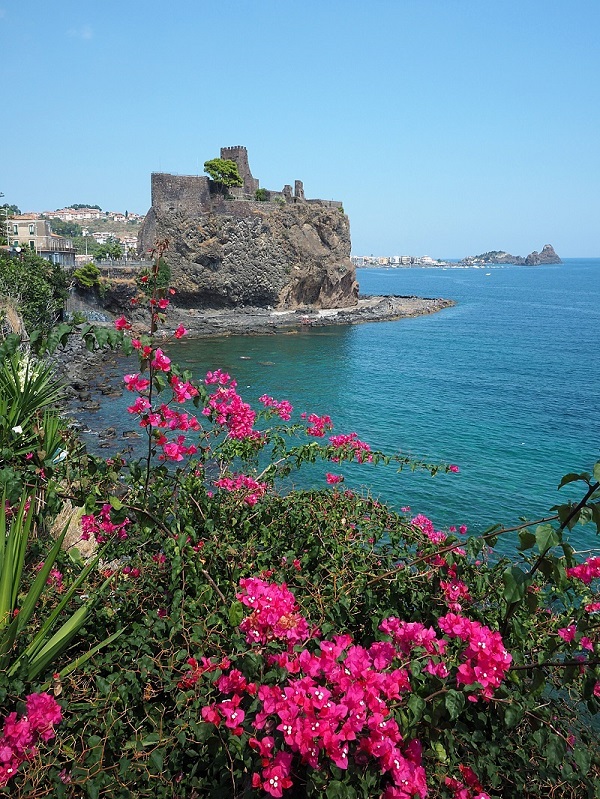 And again from Scillichenti to Riposto, touching on the seaside villages of Stazzo, Pozzillo and Torre Archirafi: a fascinating journey along the Villages built on lava bedrock, enhanced and made unique by breathtaking views, sensations, points of interest, with scents and fragrances typical of our Mediterranean scrub.

Let’s spend a day on a deep-sea fishing boat with the fishermen, exploring the calm waters, the coastal environment and the secrets hidden in the depths of the sea. On these boat trips, we can enjoy those special bathing spots that can’t be reached from land, discovering small natural gems.

And, why not, we can enjoy freshly caught fish on board or ashore in one of the charming restaurants, rediscovering traditional local recipes.

On summer evenings, after a long day under the beach umbrella at Plaja beach, what could be better than an extra round of relaxation in these unusual down-town spots?

Films we may have missed during the winter are projected on large canvas screens in a jasmine-scented courtyards, with sound that is never perfect. But the vintage atmosphere will make the experience truly unique. We take our seats in one of the rows of blue chairs, strictly made of iron: luckily, the modest cost of admission also includes a cushion!

To finish, in true Catania style, let’s have a “gazzosa e semenza”.

As soon as you land on the runway of Catania’s Fontanarossa Airport, you can’t help but notice it: Mount Etna, Europe’s highest active volcano, situated between the Alcantara and Simeto rivers, towers over the whole of Sicily.

This extraordinary natural oasis is a UNESCO World Heritage Site as one of the “most emblematic and active volcanoes in the world”.

An exclusive destination for summer hikers visiting the active craters on the summit areas, in winter this volcano offers an amazing opportunity for snow sports, just a few kilometres from the sea and with a breathtaking view of the Ionian Sea.

Excursions on foot climb along the paths of the Etna Park, through woods and verdant orchards, up to the highest altitudes with fascinating views of lunar landscapes, age-old lava flows, caves and active fumaroles, revealing all the fascination of this area.

Find out more about Catania on the izi.TRAVEL audio tours