The pane con la milza, or ‘u pani c’a meusa,  (literally bread with spleen)  is one of the most popular Sicilian street food. You can have it for lunch or for dinner and it is often served in receptions  buffets.

The origin of this dish seems to date back to the Middle Ages, when the Jews living in Palermo worked as butcher, and since they couldn’t take money for their job (due to their religious beliefs), they were allowed to take home the offal  of the butchered animals as reward.  They then boiled and fried spleen, lung, windpipe and used them, along with cheese, as sandwich filling that they sold to local gentiles. This tradition is still alive among the Palermitan caciottari (cheese dealers) and many other street-food dealers.

In Palermo, the evening before the feast of the Immaculate Conception (December 7) ‘u pani c’a meusa is a must. It is even a tradition to have it for breakast the day of the party. 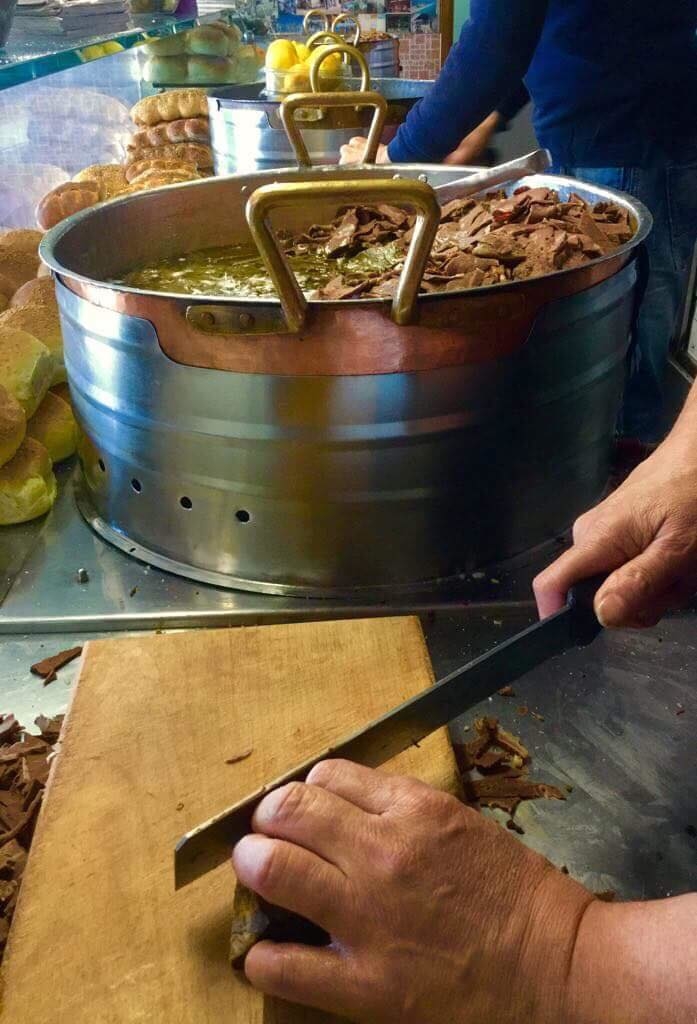 Lemon juice (only in the plain version of the schietto sandwich)

Boil the spleen, the cuttings of lung and the scannarozzato (windpipe). Put them in a dish for cooling and then cut them into very thin slices.

In the meantime cut the bread in two slices. In a cast iron pan melt the lard. When the melted fat is hot, gently fry the prepared boiled meat: first the lung, then the spleen and the windpipe.

Then take the loaves previously cut and stuff them with meat, adding  a pinch of salt.

The meusari  (the street vendors) offer you two versions of the sandwich: schietto (single) that is a plain version, or maritatu (married) that includes the final touches of either lemon juice or grated ricotta or caciocavallo cheese or both the things.