A true exciting story of courage, strength and love…

The house of Peppino Impastato, a young rebel, killed by the Mafia in Cinisi (Palermo) in 1978, is a symbolic place where his mother, Felicia, has continued to live after her son’s murder.

A house-museum to remember Peppino’s sufferings and commitment in the fight against the Mafia as part of a family which, for many years, had been subjugated by the organized crime.

Felicia’s marriage to Luigi Impastato, marks her entry in a Mafia family and, at the same time, her sad fate that, after the tragic loss of her son, will make her rebel against the code of silence, by opening the doors of this house and telling anyone who would listen her story and the one of her son, killed by the Mafia.

This place recounts all about Peppino and his battle for legality and justice. 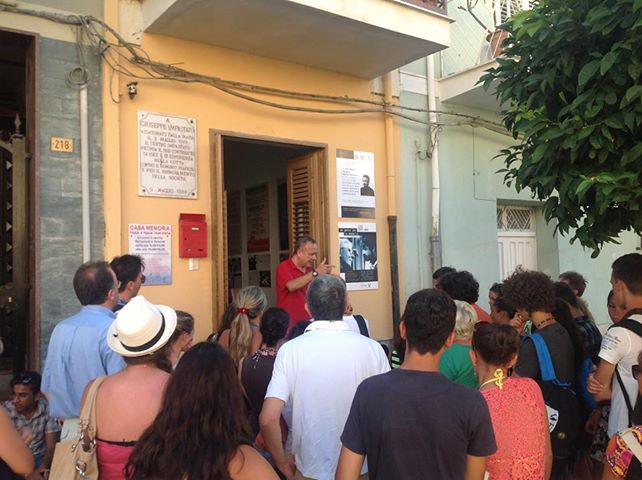 Felicia, even in her disarming simplicity, turned out to be a strong and obstinate woman that, despite her initial isolation, overcoming fatigue, prejudice and fear has never accepted the idea that the death of Peppino could be considered a suicide or an accidental death of an ordinary terrorist, as his killers wanted let people believe.

Sometimes she had been isolated by some members of the state Government, a very serious dishonour, washed out only by the commitment of some honest and intransigent judges who put themselves on the line and lost their life.

On December 7 2000, the Parliamentary Anti-Mafia Commission, on the front door of her Memory House, gave Felicia a report stating the responsibilities of some high police officers, accused of misdirection in the investigation .

Felicia, died on December 7 2004, has courageously completed the task of her life and with her Memory House, today the destination of many visitors, has left us a symbolic place defined by Umberto Santino, the president of the Impastato Center, a “secular “altar.

A place where memory and dissemination of truth and culture, become a living symbol of the resistance against power and Mafia, the concrete testimony of a struggle and courage experience, where the difference doesn’t lie in the family where you were born, but in the choices you make.

Even today, in the silence of those walls, it seems to hear the excited voices of the endless quarrels between father and son, in front of a woman who helplessly suffered the dynamics of a peaceless family.