The origins of the opuntia ficus indica, the botanical name of the prickly pears, are to dated around the fifteenth century, when they were imported from South Central America in Sicily.

Over the centuries this plant has managed to find its ideal habitat mostly among rocks and lava fields, on the slopes of Mount Etna, and it ended up fully integrating into the classic Sicilian landscape

For years it has been considered an ordinary and mediocre product, perhaps for its spontaneous vegetation, but – in 2003 – it gained two PDO recognitions with the designation of Etna Prickly Pear and Prickly Pear of San Cono, which testify its excellence and high nutritional values. 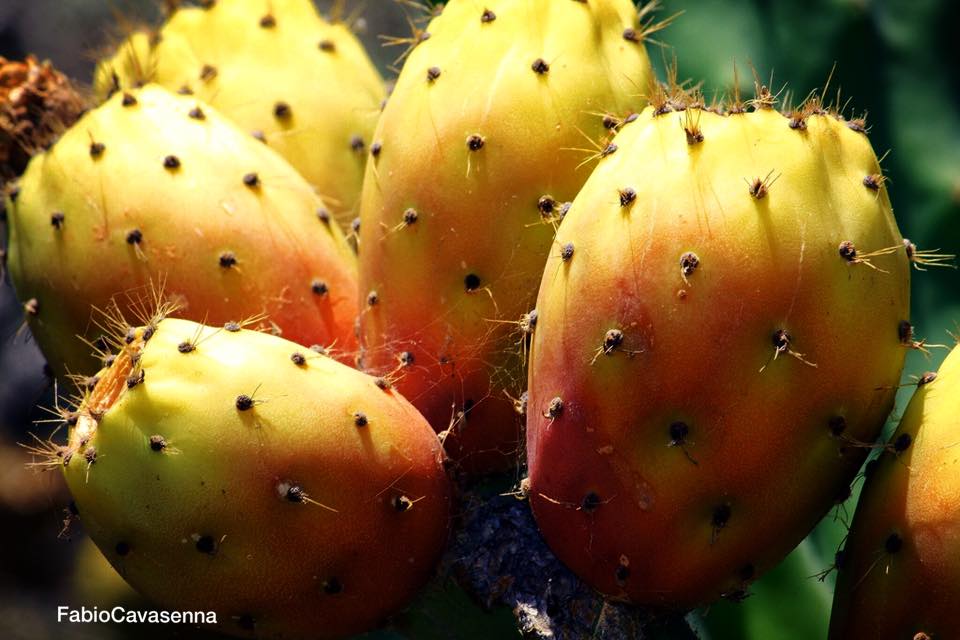 One could say that this fruit perfectly symbolizes Sicily, as it is a truly expression of what living in this island means, that is adapting to many different conditions, overcoming thorny pitfalls, and then finally savoring unexpected sweetness.

You can see it everywhere, often portrayed with its gaudy colors on typical landscapes or colorful carts, on the precious ceramics of Caltagirone, but also on clothing, accessories, jewelry and even pieces of furniture signed by the most famous fashion designers. 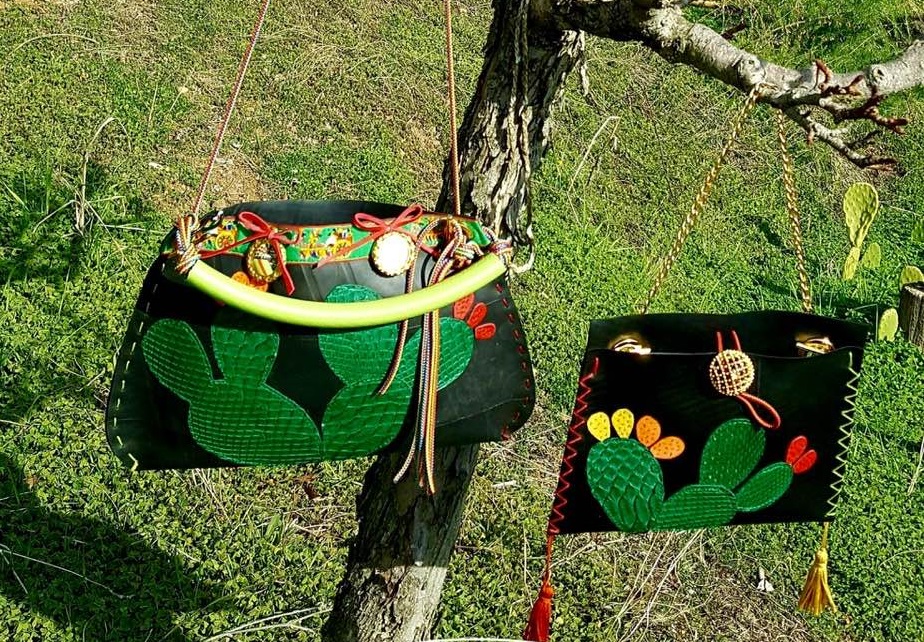 There are three different  Prickly pears varieties, having 3 distinct  colors:

The Sulfarina the most widespreaded and therefore less in demand variety, has a typical orange-yellow flesh and a slightly powdery consistency; Muscaredda, a sweeter and more crunchy variety, having a white pulp,  and finally the Sanguigna, which is characterized by its red-purple pulp, incredibly juicy and sweet. 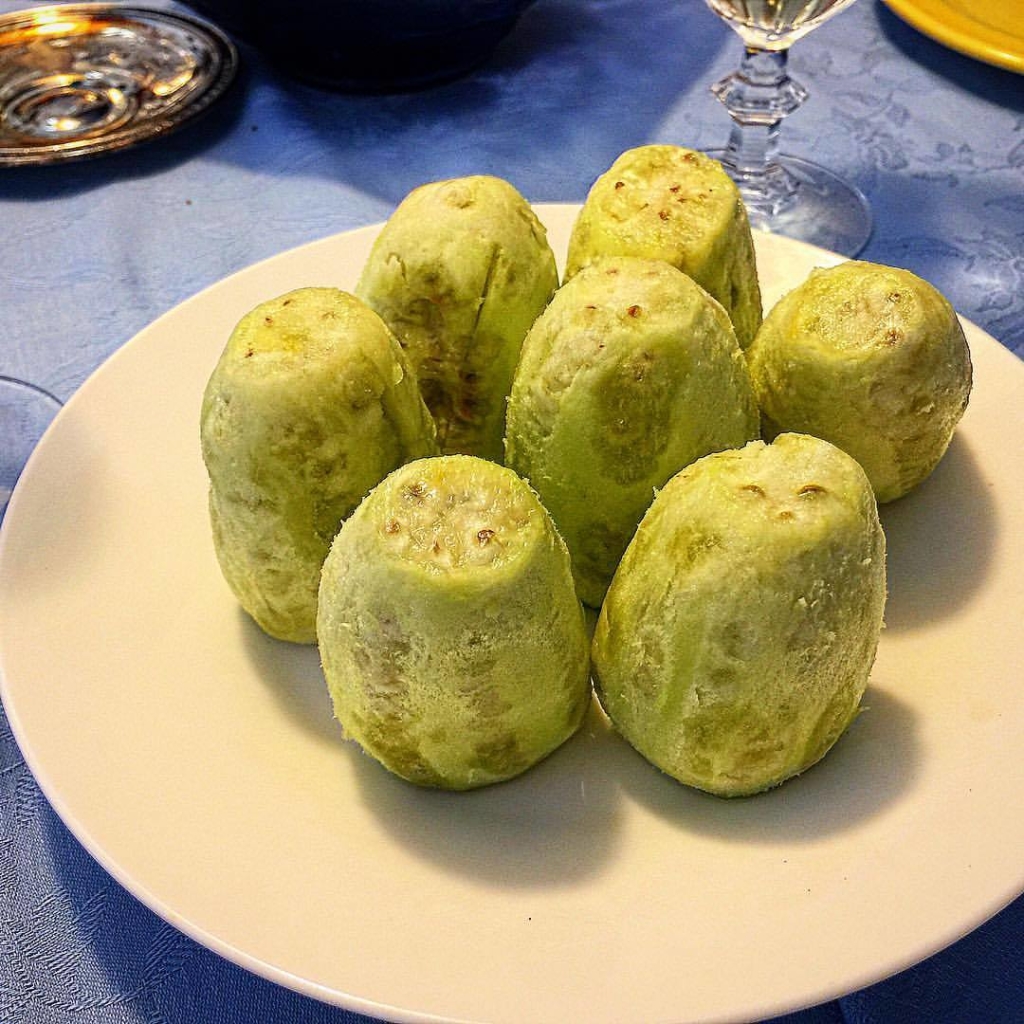 Beyond varieties, a distinction of quality should be made between the fruit first flowering, which takes place between May and June, and the so-called bastardoni, ie the prickly pears born after the second flowering, in the period running from late September to November. These latter are somewhat bigger and have a firmer pulp containing less seeds.

Sicilians generally prefer  the bastardoni which can be easily found throughout the island, even if  the high-quality ones come mostly from the areas of Belpasso, San Cono, Militello Val di Catania and Piazza Armerina. 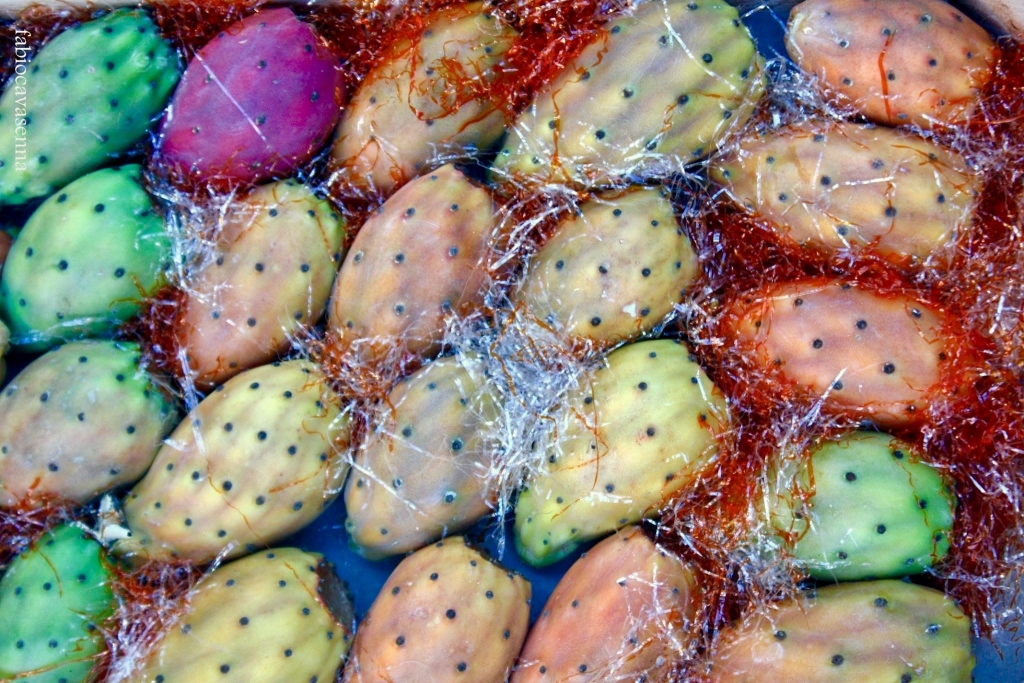 Its high content of fibres, vitamins, in particular Vitamin C, and mineral salts (calcium, phosphorus and magnesium), provide this fruit with diuretic, astringent, anti-inflammatory, antioxidant and gastroprotective properties. In short, it is a true cure-all. Not to mention its large, fleshy and thorny leaf, called pala, whose juice and pulp are used in cosmetology and in phytotherapy for their incredible healing and moisturizing qualities. 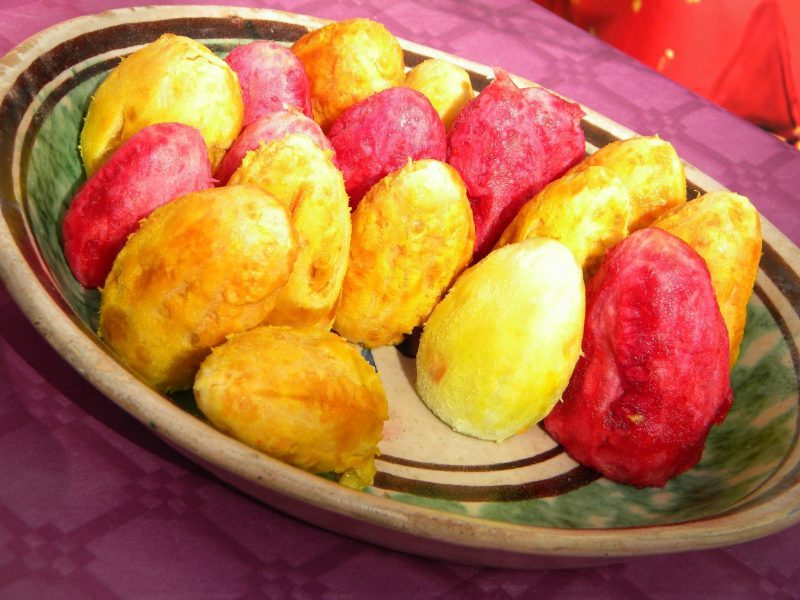 To clean a prickly pear just take up forks, knives and gloves (for the less experienced ones) to avoid being pricked. This risk, however, will be compensated by the goodness of their taste! 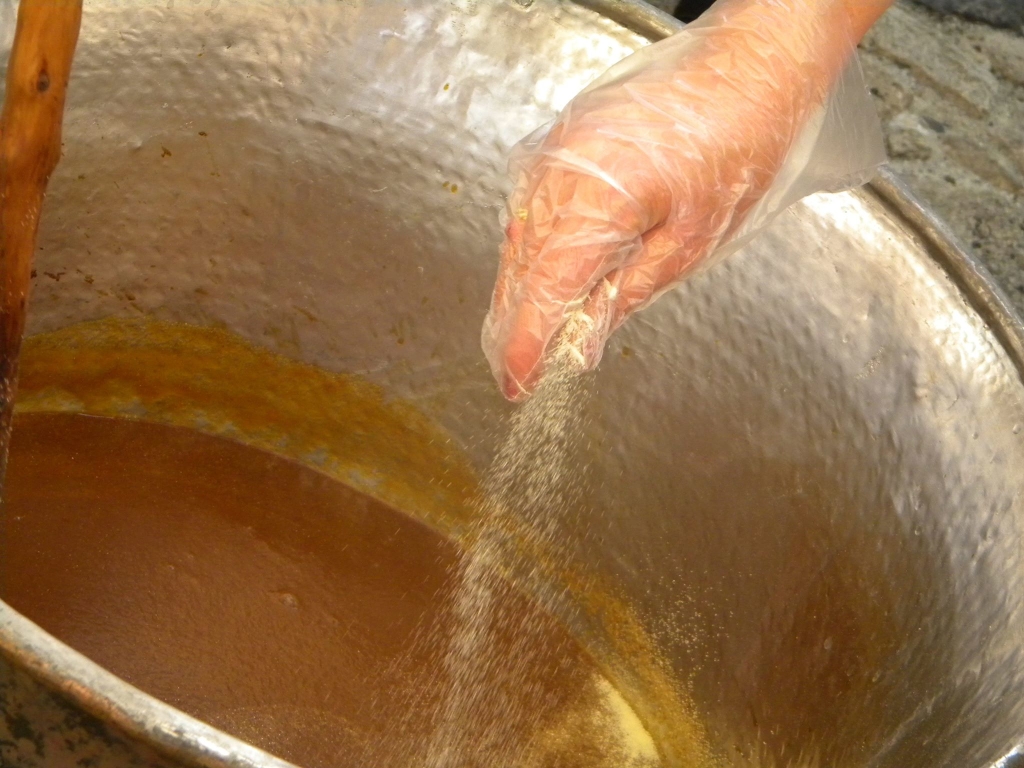 You can’t imagine how this fruit is used for making sweets or culinary recipes; from the traditional mostarda (preserved fruit), that you can taste – still warm and fragrant –  directly from the classic ceramic molds where it is generally put once cooked, to liqueurs, sweets and biscuits such as the mustazzola. Not to mention other modern recipes such as ice creams, juices, jams for croissants, pâté for ravioli and even creams for risottos. From its leaf, the so-called pala, you get delicious dishes: from classic pancakes to must-have fashion centrifugati, tasty fruit juices prepared as aperitifs. 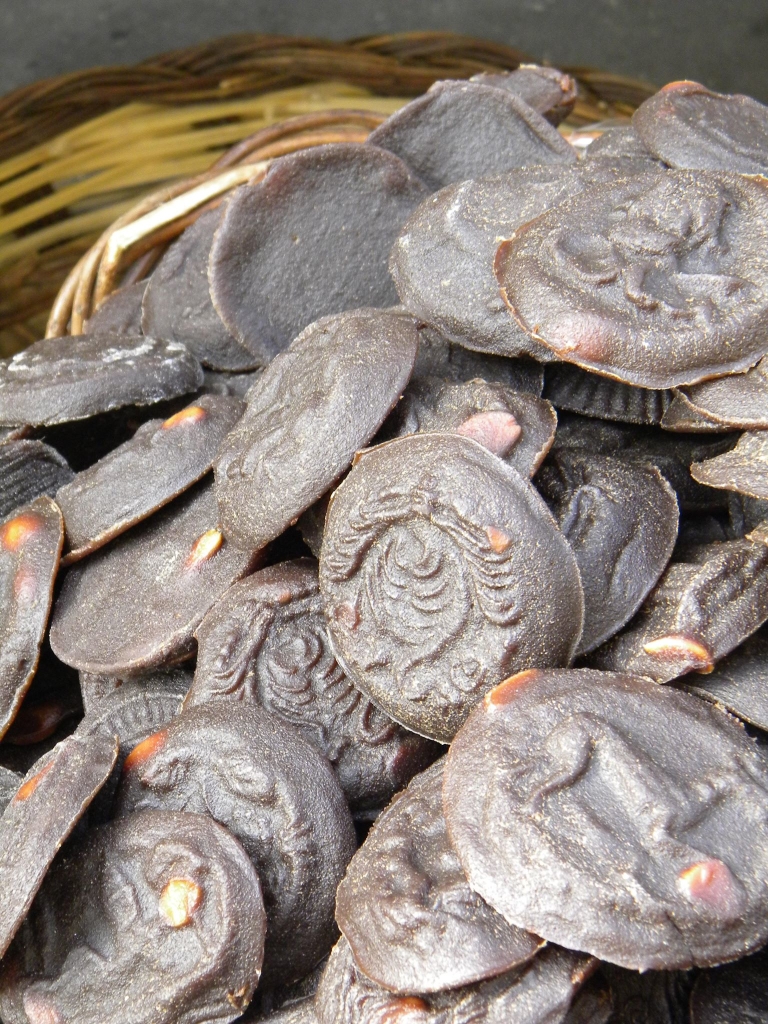 During the period running from September to November, several festivals dedicated to this fruit are held all over Sicily,  such as the Opuntia ficus Indica Fest in Roccapalumba, in the area of Palermo, and the Ficodindia Fest in Santa Margherita del Belice (region of Agrigento), and the most famous held in the province of Catania as the Sagra del Ficodindia in San Cono and Belpasso and the Mostarda and Ficodindia Festival in Militello in Val di Catania. 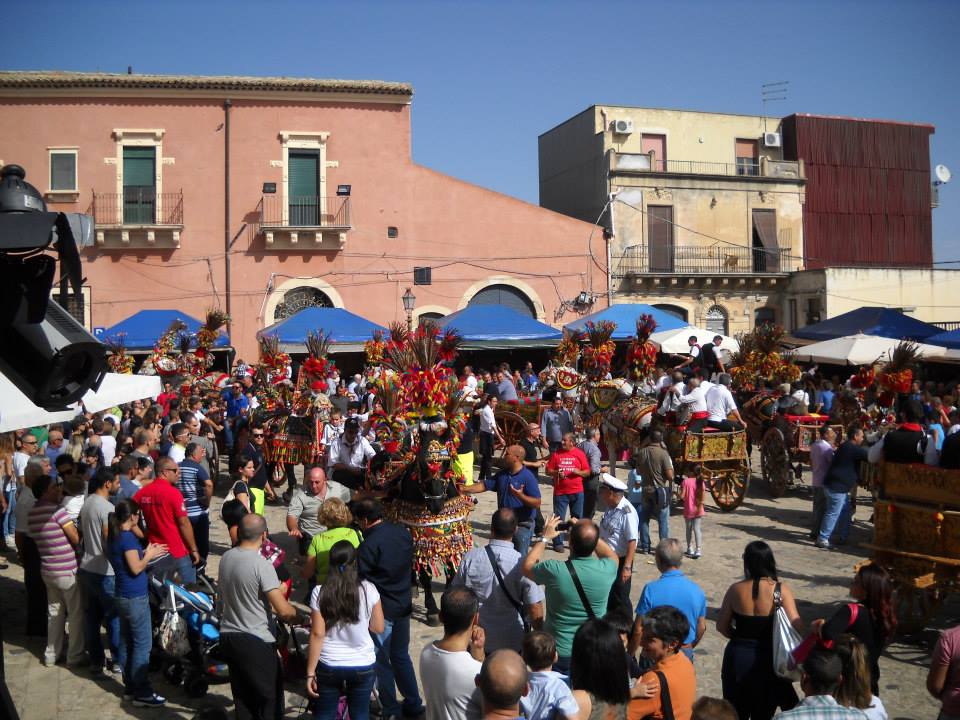 All these events are some not be missed opportunities for discovering these villages, out of the usual tourist circuits;  an occasion for  knowing  their traditions and tasting the best Sicilian prickly pears varieties.