Visiting Syracuse means taking a trip back in history, discovering a thousand-year-old city whose origins lie in the remote past but which remains eternally splendid in our eyes.

The Neapolis and Pantalica, Ortigia and the Ciane papyri, the magic and charm of its territories and coastline, Noto, the beautiful beaches of the Vendicari Reserve, Marzamemi, and the evocative Isola delle Correnti, make it one of the most popular destinations for visitors to Sicily.

Great, solemn, intriguing, spectacular. As you sit on the stone steps, even if there is no actor on stage, you can imagine hearing the echoes of the heroes of the great Greek tragedies such as Agamemnon, Medea or Oedipus. 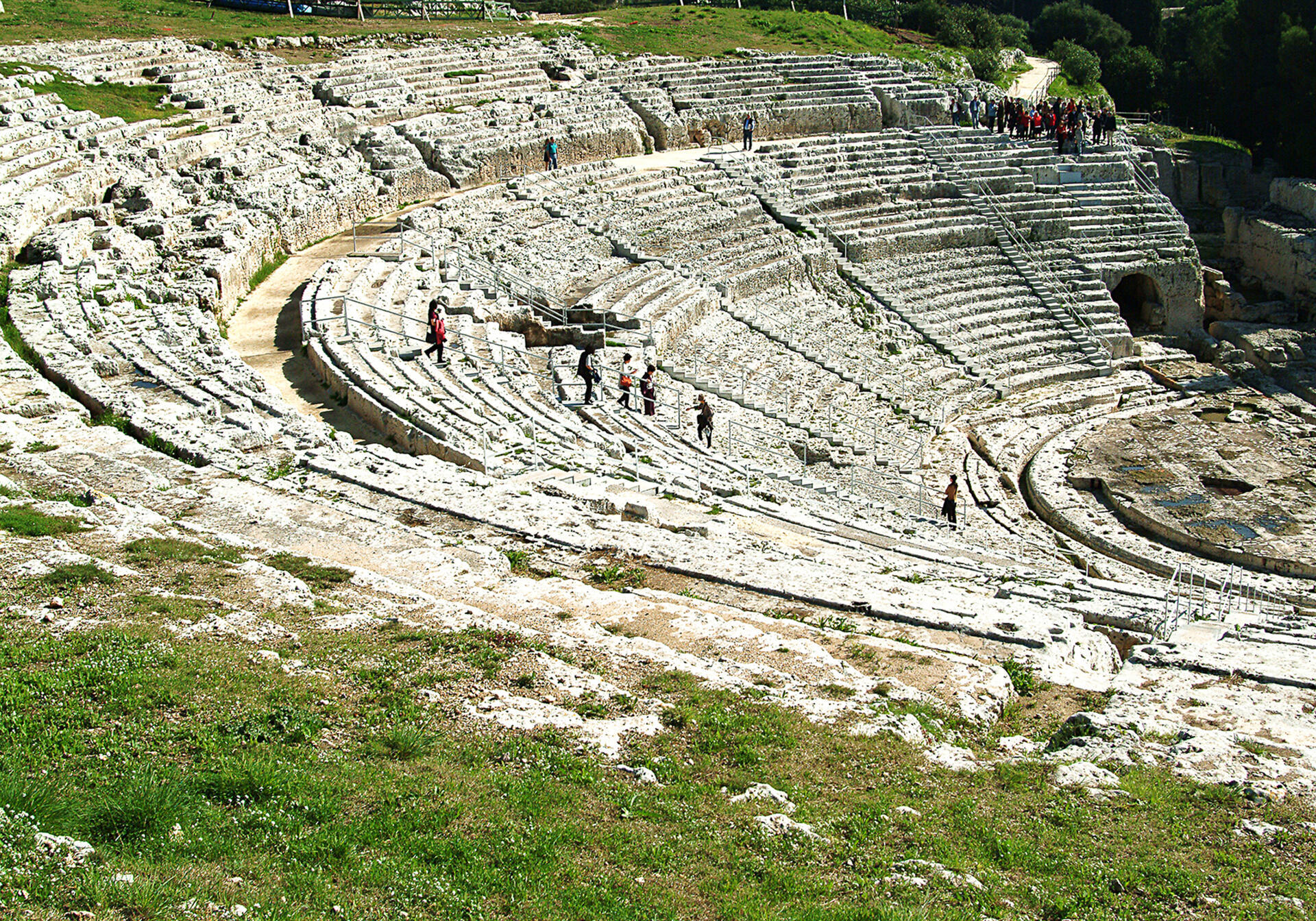 It treasures evidence from various periods, from protohistoric epochs to late antiquity and the Byzantine Empire. The Greek Theatre of Syracuse is one of the largest in the world, entirely excavated in rock.

In ancient times it was used for shows and popular assemblies, but today it is the place where Greek tragedy lives again through the Cycle of Classical Performances that takes place every year. At sunset, and perhaps even under a full moon, we can enjoy a unique experience here on the steps of the Greek Theatre.

The legendary Ear of Dionysus is the most famous of Syracuse’s caves.

It is so called because of its ear-like shape, and above all because of its exceptional acoustic properties that amplify sounds from inside. According to legend, the tyrant Dionysus kept his prisoners here and secretly listened to their discussions. It is an artificial cave located beneath the Greek Theatre, in the ancient stone quarry known as the Latomia del Paradiso.

A feast of colours, scents and authentic flavours of our land, the charm of ancient markets.
At the entrance to the island of Ortigia, connected to the city by the Umbertino bridge, you will be greeted by the scent of spices of all kinds: chillies from Etna, almond cakes, as well as seafood and fresh fish. A small market enlivened by colourful “vanniate“, catchy phrases in Sicilian shouted to attract customers. You can buy a rare treat, u strattu, a concentrated tomato paste used to flavour sauces and stews. A delightful opportunity to get to know our typical products and learn new Sicilian recipes. 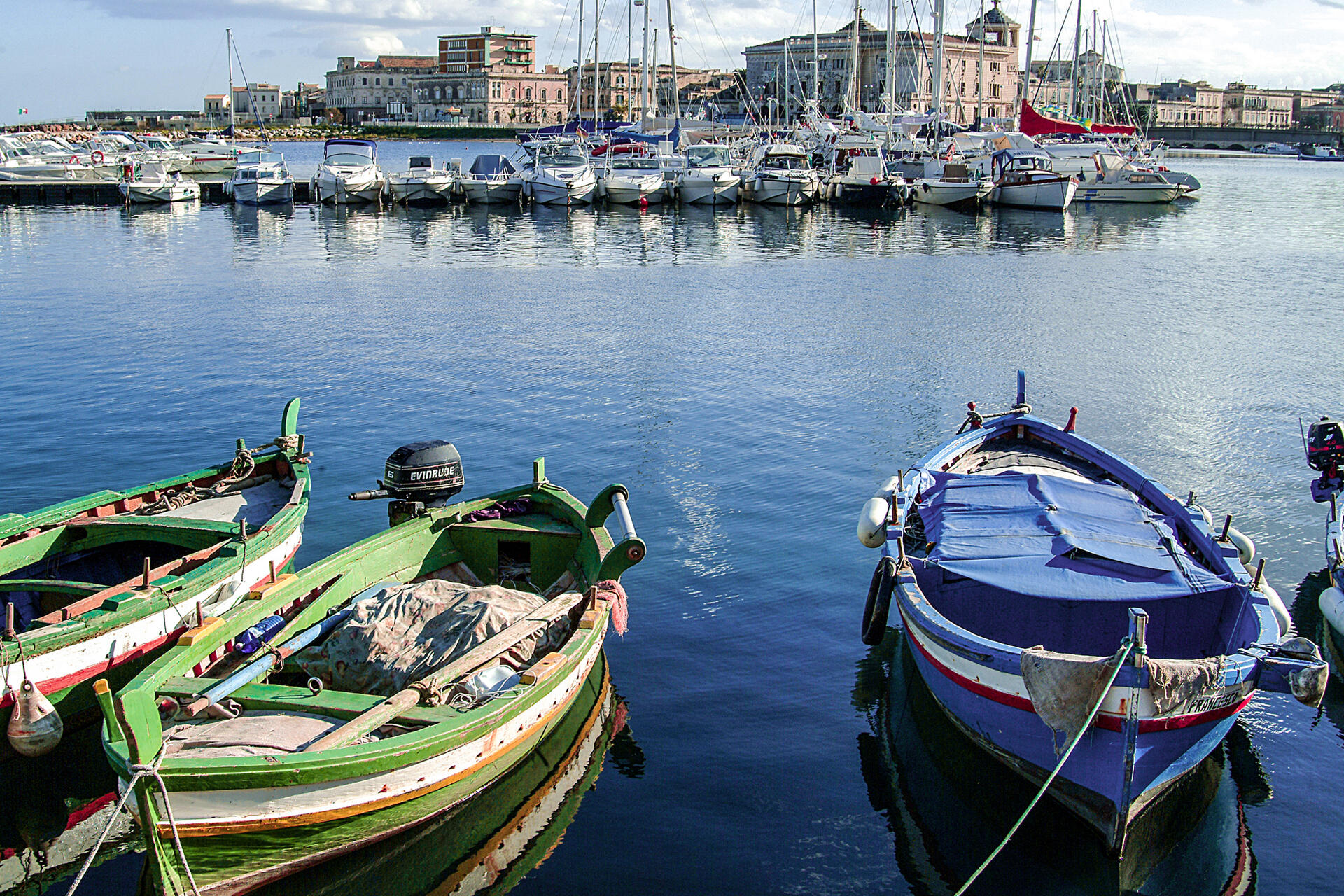 During the celebrations in honour of Saint Lucia, one of the most exciting moments is the fireworks salute to the patron saint as she arrives at Ponte Umbertino, before she resumes her journey to the Cathedral, where she will make her entrance back into her chapel.

This is one of the most famous squares on the web because it is one of the most beautiful in Italy! Surrounded by magnificent Baroque palaces, it is the heart of civil and religious life in Ortigia, the ancient city of Syracuse and a UNESCO World Heritage Site. Let’s take a break, sit down for an aperitif and enjoy the atmosphere! 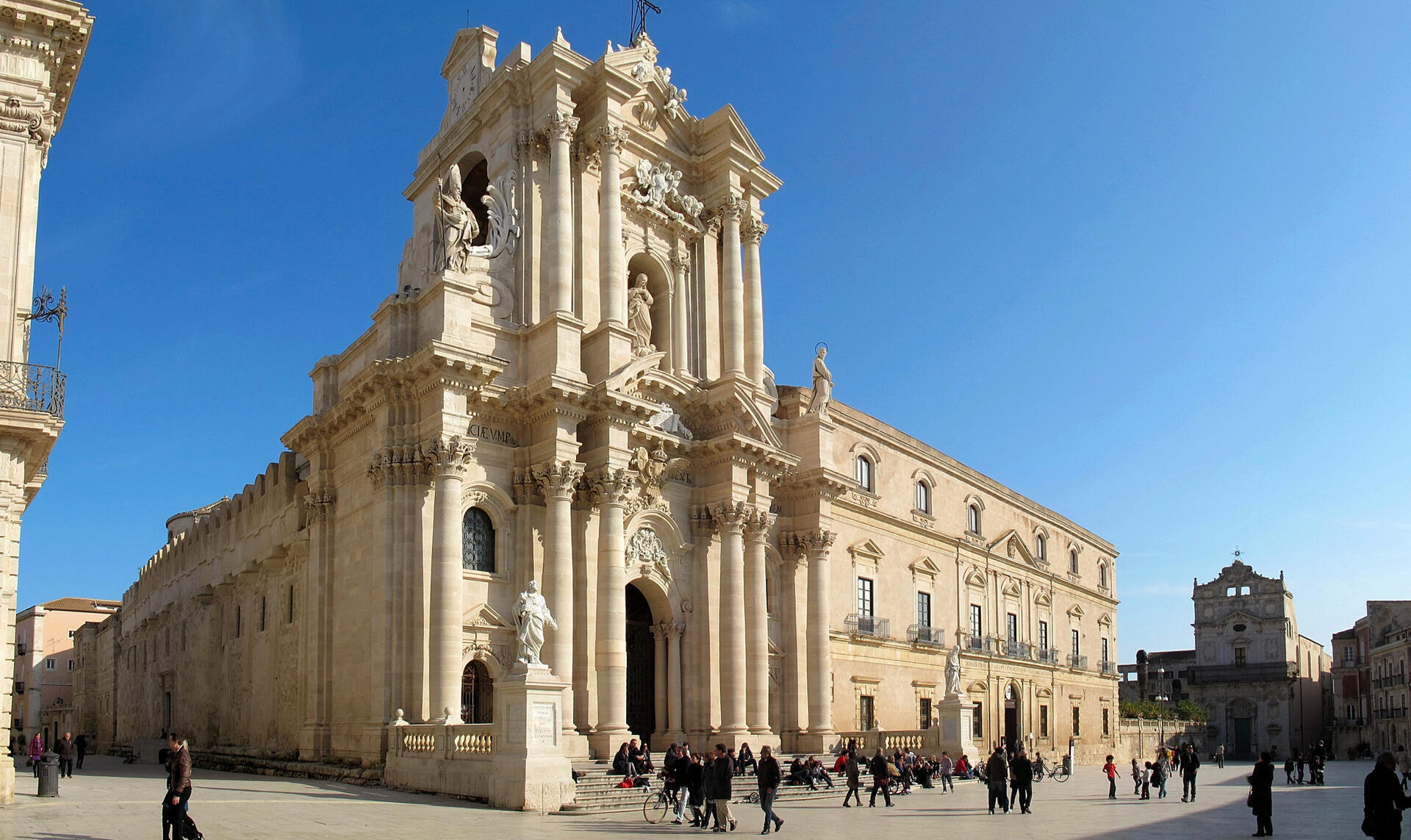 The Cathedral is an exceptional case of pagan temple and Christian church at the same time: it stands on the ruins of a temple dedicated to Athena built in 480 B.C., and conceals a jewel of the past behind the Baroque style of the façade, with the Doric columns still visible both outside and inside. At the end of the square, the Church of Santa Lucia alla Badia houses “Il seppellimento di Santa Lucia – The Burial of St. Lucia”, a timeless masterpiece by Caravaggio during his stay in Sicily, depicting the martyrdom of the patron saint of Syracuse.

This is one of the most important and prestigious archaeological museums in Europe. It displays exhibits dating from different periods, from the prehistoric period to the Greco-Roman era, from excavations in the ancient city and other sites in Sicily.

This is a place of pilgrimage, a suggestive place where you can breathe an air of peace, tranquillity and mysticism. 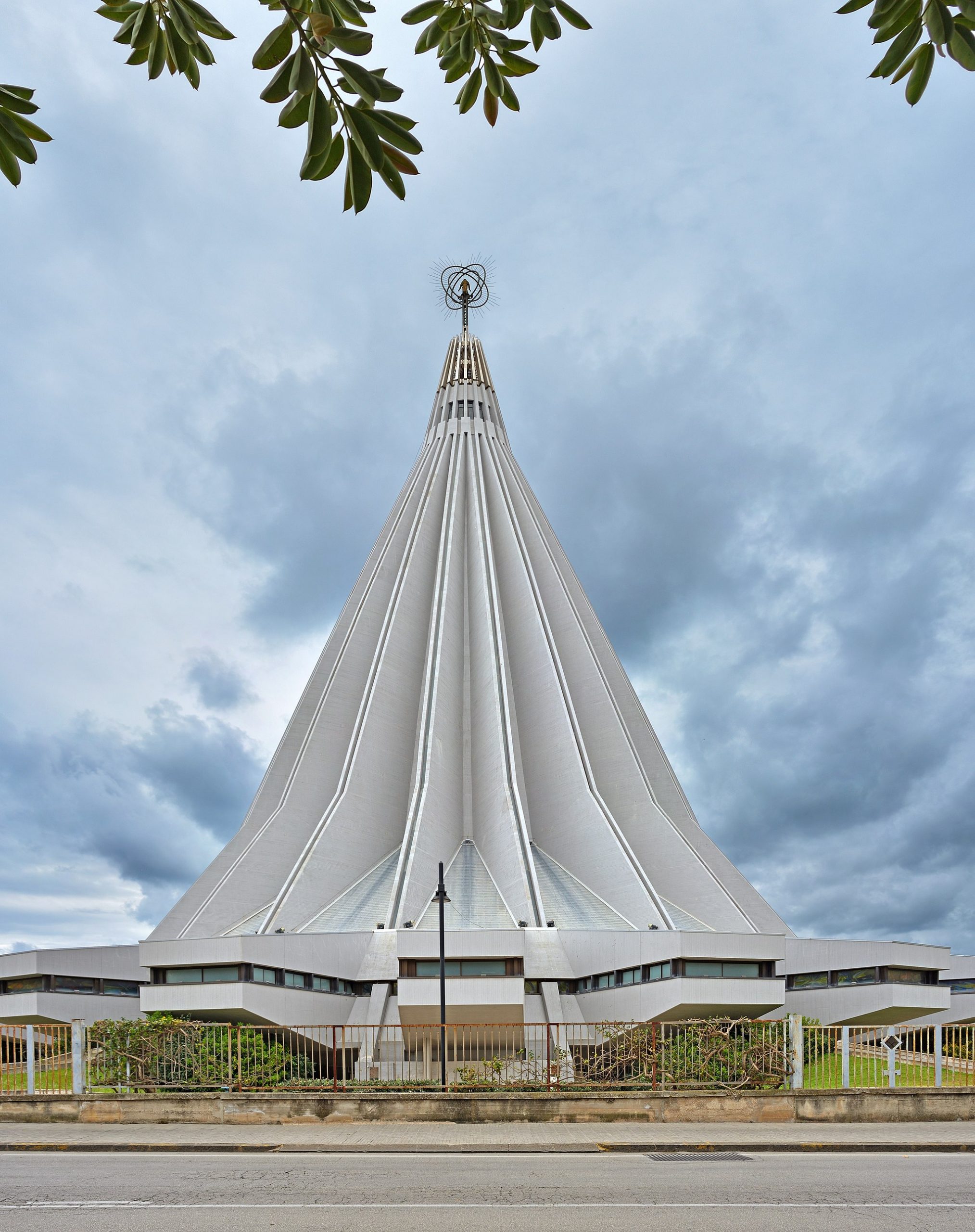 A monumental structure erected in memory of a miraculous event that took place in 1953: the tearing of a plaster effigy of the Virgin Mary (1953). Some precious mementoes of this extraordinary event are kept in the Sanctuary: the original painting, the flap of a cloth that covered it, a handkerchief wet with tears and even crystallised tears.

If you’re a fan of castles, you’ve come to the right place: these are some of the most impressive in southern Sicily.

Maniace Castle was named after the Byzantine commander Giorgio Maniace. A true symbol of the power and genius of Emperor Frederick II, who built it on an ancient fort between 1232 and 1240. Immersed in the colours of the sea, it is the furthest edge of the island of Ortigia.

Castello Eurialo – the Euryalus Castle, is one of the largest and most complete military works of the Greek period. It was built at the behest of Dionysius I, tyrant of Syracuse, to complete the grandiose defensive system known as the Mura Dionigiane – the Dionysian Walls, which ran along the entire edge of the Epipoli plateau.

Walking among the ruins, one seems to go back in time and hear the sound of soldiers’ sandals.

The magnificence of these Greek ruins is immediately apparent at the entrance to the islet of Ortigia. 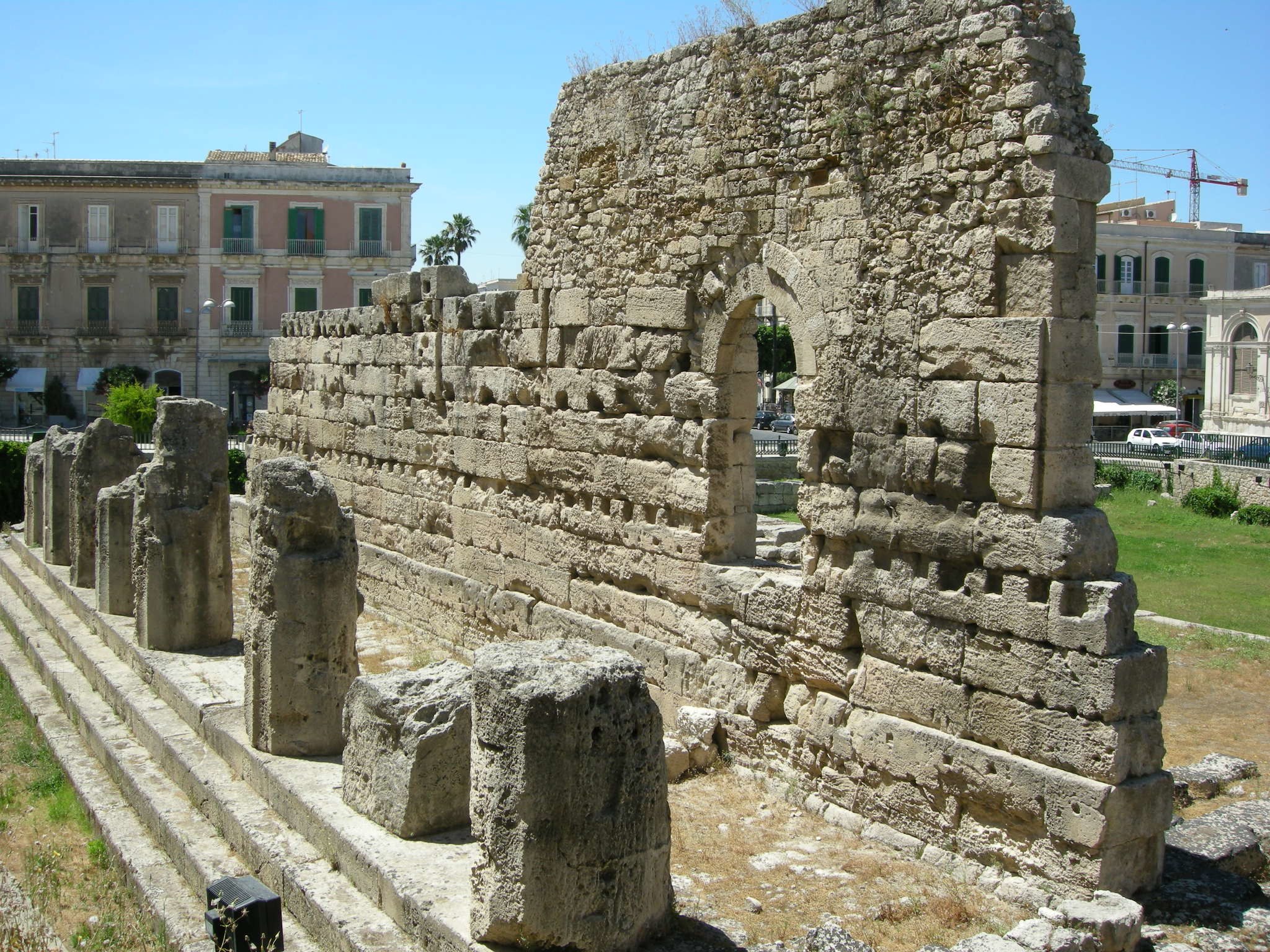 It is the oldest Doric stone temple in Sicily and also one of those with the most troubled history: it was first an early Christian church, then a mosque, then a church again in the Norman period and barracks during the time of Charles V.

In the evening, illuminated by the lights of the city, it offers us an even more impressive spectacle.

The spring comes from a freshwater source and forms a small semicircular lake with fish, geese and ducks where the plants of Europe’s only spontaneous papyrus grows luxuriantly. Nearby, inside a restaurant, it is possible to visit, free of charge, the Antico Lavatoio (Old Washhouse) dating back to the 18th century.

The name comes from the legend of the nymph Arethusa, who, to escape the impetuous love of Alphaeus, threw herself into the sea and reached the island of Ortigia. Here, the goddess Diana, pitying her extreme gesture, transformed her into a spring. Alphaeus, in turn, turned into a river and his waters crossed the sea to gush out in a spring of water a short distance from the fountain of Arethusa, to join her forever.

Piazza Archimede, dedicated to the mathematician and physicist from Syracuse, is home to the fountain that tells the myth of Alphaeus and Arethusa. The square, with its 19th-century charm, is surrounded by buildings that sum up the history of Sicily, from the Middle Ages to the present day.

Discover more about Syracuse on the izi.TRAVEL audio tour.