A visit to the Sicilian hinterland offers the opportunity to discover something new about the island. Nature, art, history and gastronomy are the four attractive cornerstones that converge on Caltanissetta.

Here are ten stages for your itinerary!

This is a marvellous glimpse of fascinating Medieval Sicily. To visit its castles is like delving into the noblest soul of numerous locations, just waiting to reveal their most spectacular landscapes. Such is the case of Caltanissetta

. Historic sources claim that the name Caltanissetta derives from the Arabic Qal’at an-Nisa. The Norman historian Goffredo Malaterra translated it into Castrafeminarum, literally “Castle (or fortress) of the women”, due to the fact that at certain times of the year, the stronghold was inhabited only by women.

The ancient fortress with its red brick towers, also known as the “Castello di Pietrarossa“, is situated on a sheer cliff overlooking the valley below

A visit to the castle is a must, and from there you can move on to the centre of the city.

Learn more about the Castles of central Sicily. 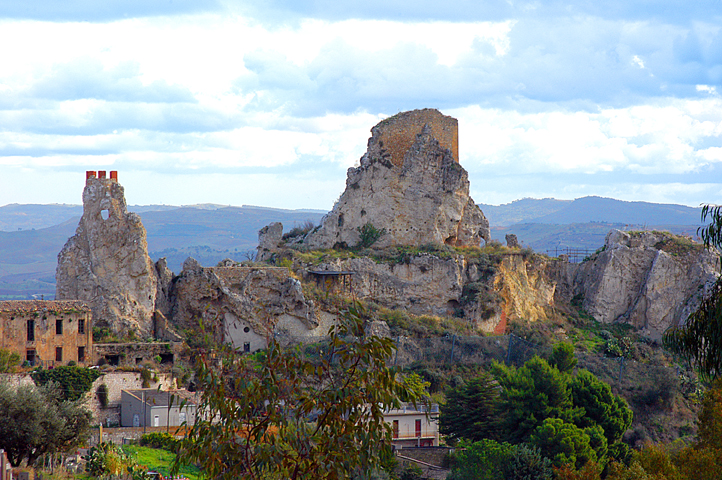 Approaching the Piazza Garibaldi, we are immediately captivated by the Fontana del Tritone, created in 1956 by the local sculptor Michele Tripisciano and the architect Michele Averna. It depicts a bronze horse tamed by a triton and challenged by two sea monsters.

Behind the fountain stands today’s Cathedral dedicated toSanta Maria la Nova: when inside, look up to admire the trompe l’oeil frescoes by the Flemish artist Guglielmo Borremans, known as the “genius of Palermo”. They depict: “The Triumph of Religion”, “The Choir of Virgins and Virgins”, “The Immaculate Conception”, “The Coronation of the Virgin” and, finally, “The Triumph of St. Michael over the Rebellious Spirits”.

Piazza Garibaldi becomes the scene of the Spartenza, a traditional re-enactment ritual not to be missed during Holy Week in Sicily. 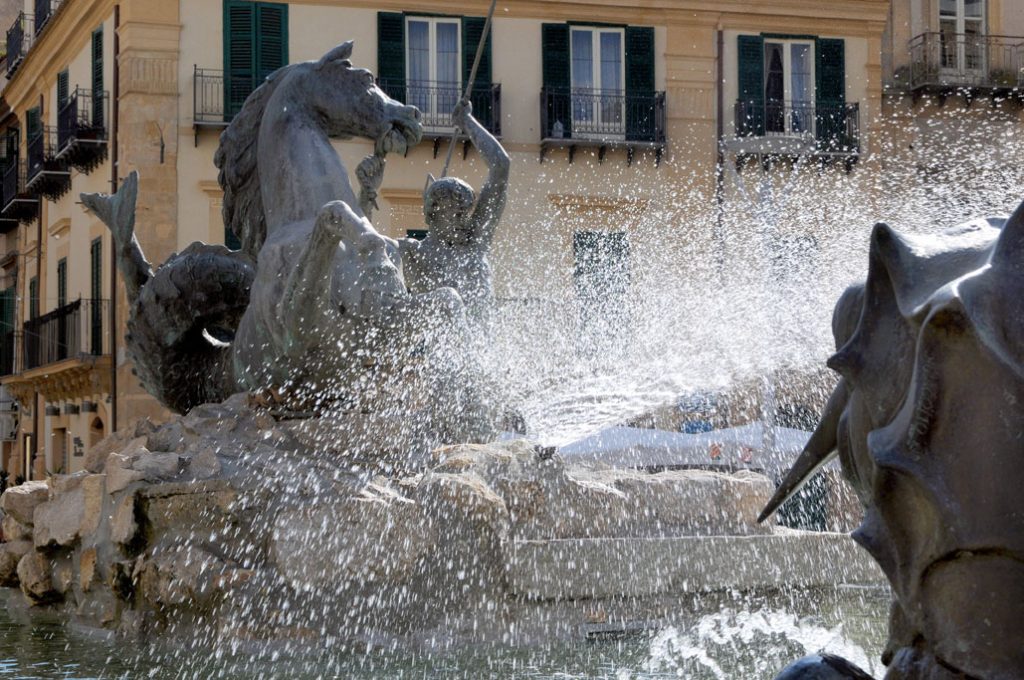 A stroll through Caltanissetta’s old town centre will reveal some splendid buildings constructed by nobles and monarchs of the past. Corso Vittorio Emanuele and Corso Umberto I lead off from Piazza Garibaldi.

On Corso Vittorio Emanuele, you will come across the prestigious Teatro Regina Margherita, built in 1870 and dedicated to the wife of King Umberto di Savoia, Queen Margherita, after whom the theatre is named. It is one of the oldest theatres on the island, a jewel set in the heart of the city. Its sober and austere façade conceals the Baroque features typical of 19th-century architecture. Today, after a long restoration, it has been revived as an artistic venue. The Corso terminates with the façade of the Church of Santa Croce, the former site of a Benedictine monastery, founded in 1531. The other half of the Corso is used as a pedestrian area on certain days and at certain times, but the wide open space enables people to stroll peacefully even when the street is open to city traffic. Lets’s browse among the shop windows and enjoy some shopping!

At the crossroads between Corso Vittorio Emanuele and Corso Umberto I stands Palazzo del Carmine, which houses the town hall. A little further on, on the same side of the street, we come to salita Matteotti, where the prestigious Palazzo Moncada is located.

The original design intended the Palazzo as an enclosed block, spread over three floors, with a large courtyard in the centre; only a few elements remain of the latter, suggesting the former existence of large arches. Between floors, anthropoid and zoomorphic corbels extend from the walls to support a balcony. Now restored, it houses a theatre, a multiplex cinema and a civic museum, and hosts a permanent exhibition of works by Caltanissetta artist, Michele Tripisciano.

The Church of Sant’Agata al Collegio is a majestic edifice with its two wings of steps leading off to the right and left from the central staircase, which is accessed by an iron gate. Also this building recalls the Moncada family. Noteworthy polychrome marbles and frescoes adorn the interiors.

Inside, in the Chapel of St. Ignatius (to the left of the entrance), we can admire a very fine decoration of mixed polychrome marbles, including a precious antependium representing a “bestiary” of exotic birds. Under the altar of St Ignatius, next to the globe, are four female figures symbolising the four continents as they were then known. The four continents are also depicted in the frescoes that adorn the walls, some of them attributed to Borremans. 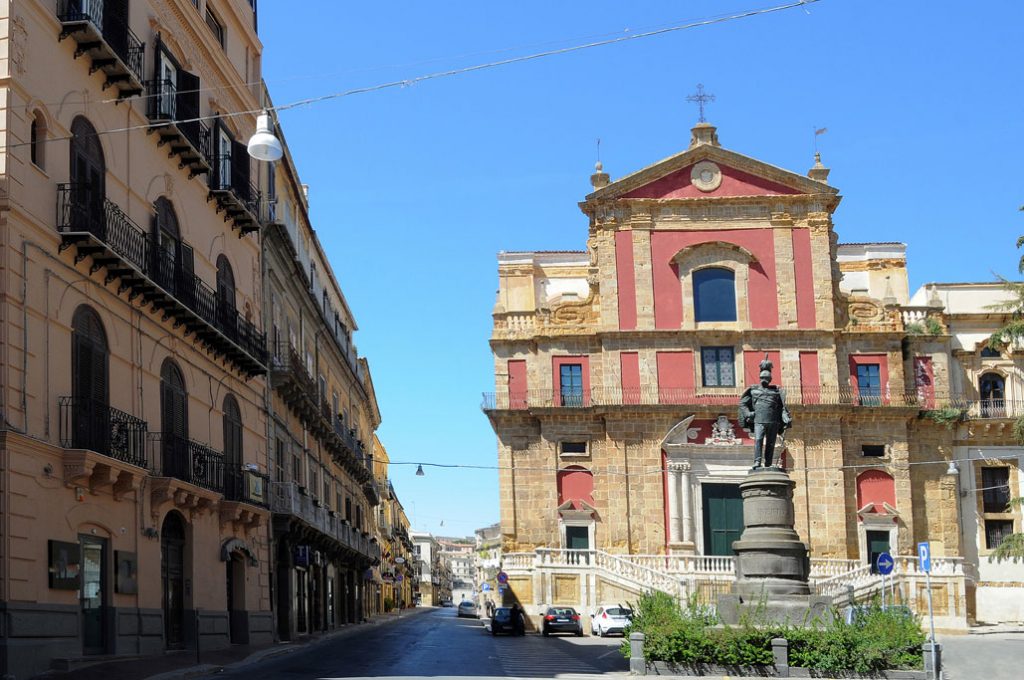 The Museum of Caltanissetta’s Episcopal Diocesan Seminary occupies ten rooms and two galleries on the ground floor of the monumental Episcopal Palace. It exhibits more than five hundred works of art ranging from the 15th to the 21st century.

Paintings, sculptures, silverware, liturgical vestments and applied art objects, from the churches of the Caltanissetta diocese, offer an overview of the various artistic and cultural realities present in the area and trace the history of the local church. Among the valuable works are a 16th-century copy of Spasimo of Sicily by Raphaello and a rare 18th-century coral vestment. There is also a section of contemporary art that houses, among others, Vincenzo Gemito’s Malatiello, a head of the Virgin by Michele Tripisciano and a statuette of St Michael by Giuseppe Frattallone. This part of the collection also includes bronze statuettes and paintings by important artists of the Brera Academy such as Aldo Carpi, Silvio Consadori, Eros Pellini and Enrico Manfrini.

The Church of Santo Spirito was built by Roger the Norman in 1095 on a pre-existing fortified Arab hamlet. Its purpose was to Christianise the conquered island and convert the peasants living outside the city. In early Christian style, it has a simple and severe Romanesque structure with a single nave and three apses. The quadrangular tower, the embrasures and the pointed arches are relics of Arab workmanship. 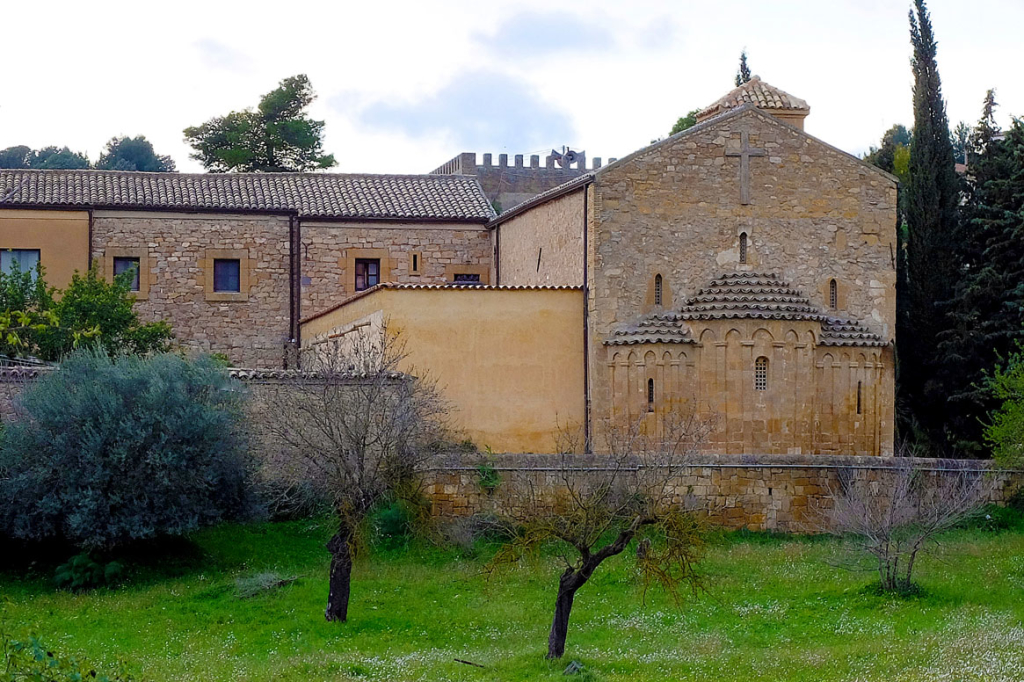 The interoir comprises a fresco of Christ Pantocrator, a Norman baptismal font with a Muslim influence, a rare 12th-century tin chalice and a marble cinerary urn with Roman inscriptions from the cemetery behind the church. The statue of the Madonna delle Grazie holds in her arms the Christ Child wearing a sprig of coral around his neck (in this century, coral was believed to protect children from disease).

About 150 metres away is the Regional Archaeological Museum of Caltanissetta. This site houses Neolithic artefacts from the archaeological sites of Sabucina, Gibil Gabib, Monte Capodarso and Monte S. Giuliano. It is home to the famous
Averna company, producer of the world-famous “amaro” liqueur of the same name.

A visit to the Vare Museum, currently housed in the basement of the Church of San Pio X, is well worthwhile. Good Friday is the day of the most heartfelt and evocative procession in Caltanissetta’s calendar of religous events: the procession of the Black Christ. It is a wooden crucifix, just 85 cm high, found by two “Fogliamari” – gatherers of wild herbs – inside a cave, set between two candles and blackened by their smoke.

It has been cleaned several times, but the crucifix invariably turned dark again: hence the nickname “Black Christ” and the tradition of its veneration as a miraculous icon. The Black Christ, called the Lord of the City, was Caltanissetta’s patron protector until 1625, the year in which Saint Michael the Archangel was proclaimed patron. He had indicated the whereabouts of a plague victim just outside the city walls, thus preventing the spread of the disease to Caltanissetta.

The Sebastiano Mottura Mineralogical, Palaeontological and Sulphur Mining Museum houses a rich collection of minerals and a permanent exhibition dedicated to mining technology for the extraction of Sicilian sulphur.

The mines of Gessolungo and Trabonella can be seen from outside, taking advantage of the splendid views of the Caltanissetta countryside.

In the historic centre of Caltanissetta we discover the timeless charm of Via Consultore Benintende: colourful and fragrant, this street has been home to the historic Strat’a Foglia market since the end of the 18th century.

From Piazza Mercato Grazia to Via Berengario Gaetani, the entire Via Consultore Benintende comprises a succession of stalls selling fruit and vegetables, cheeses, pulses and gifts. There are also bakeries, fishmongers, butchers and exotic food shops. Let’s delve in and enjoy some Sicilian Street Food!

In ancient times, the market was used to sell the wild herbs of the “fogliamara”, the characteristic escorts of the Black Christ procession on Good Friday. It was also home to many taverns frequented by miners working in the sulphur mines in the Caltanissetta area.

Now it’s time to take in some serious art! In the historic quarter of San Rocco, near the market, we find the 18th-century Palazzo Natale Cosentino, consisting of two wings joined by a terrace, the secondary entrance to the 19th-century Palazzo Benintende.

If that hasn’t satisfied our culture-lust, let’s get in the car and explore the surroundings!