Let’s delve into the centre of Sicily’s hinterland. Enna has the highest elevation of any provincial capital in Europe, capable of enchanting you from any point in the city thanks to the beauty of the nature that surrounds it.

Let’s discover the 10 things to do in the city.

1 – Lose yourself in infinity from the Rocca di Cerere

The most extraordinary view of Enna opens up before our eyes from the Rocca di Cerere. This was the site of the sacred temple to the Mother Goddess, Demeter for the Ancient Greeks, Ceres for the Romans. 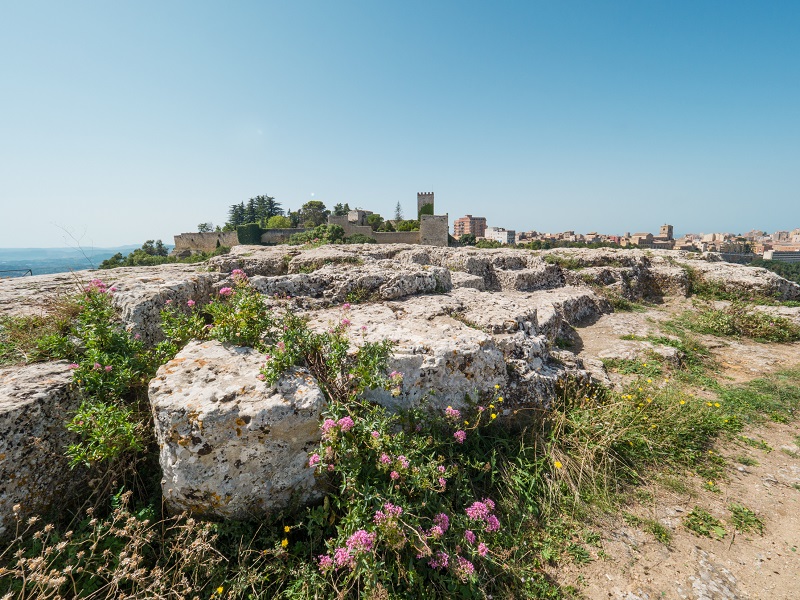 The landscape, which opens majestically over the wheat fields, varies according to the season and time of day. The colours change, from the soft shades of dawn to the intense hues of dusk.

The myth of Demeter and Kore (Ceres and Proserpine for the Romans) is one of Sicily’s most compelling legends: don’t miss a visit to the Myth Museum in Enna for a fascinating immersive multimedia experience. 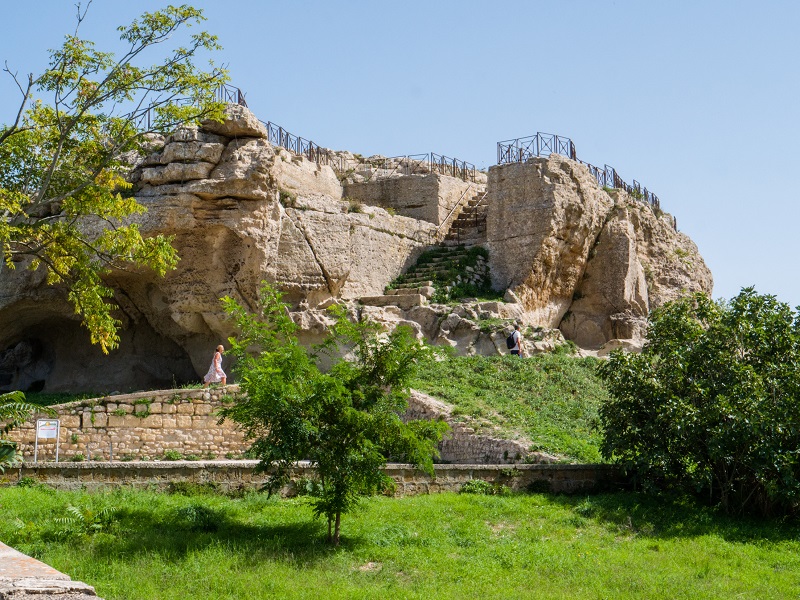 2 – The Lombardy Castle and Federico’s Tower

Near the Rocca di Cerere we find the symbol of the city of Enna. The Lombardy Castle is one of the largest medieval castles in Italy. It was here that Frederick II of Swabia convened the first Sicilian Parliament.

Of the surviving towers, the 13th-century Torre Pisana, also known as the Tower of the Eagles, is the city’s main attraction: Sicily’s quintessential Belvedere. From here, the lookouts of old could control a large part of the island and even see the sea on a clear day.

The octagonal Frederick’s Tower, surrounded by the city park of the same name, was connected for centuries to the Lombardy Castle by a tunnel dug into the rock below the city. A short distance away stands the monumental Porta Janniscuru, one of Enna’s ancient gates. It will seem as if we have stepped back in time.

The monumental splendour of Enna’s Duomo dominates the historic centre of the city. Dedicated to the Maria Santissima della Visitazione, Enna’s patron saint, it is listed as a National Monuments, as well as being a UNESCO World Heritage Site. 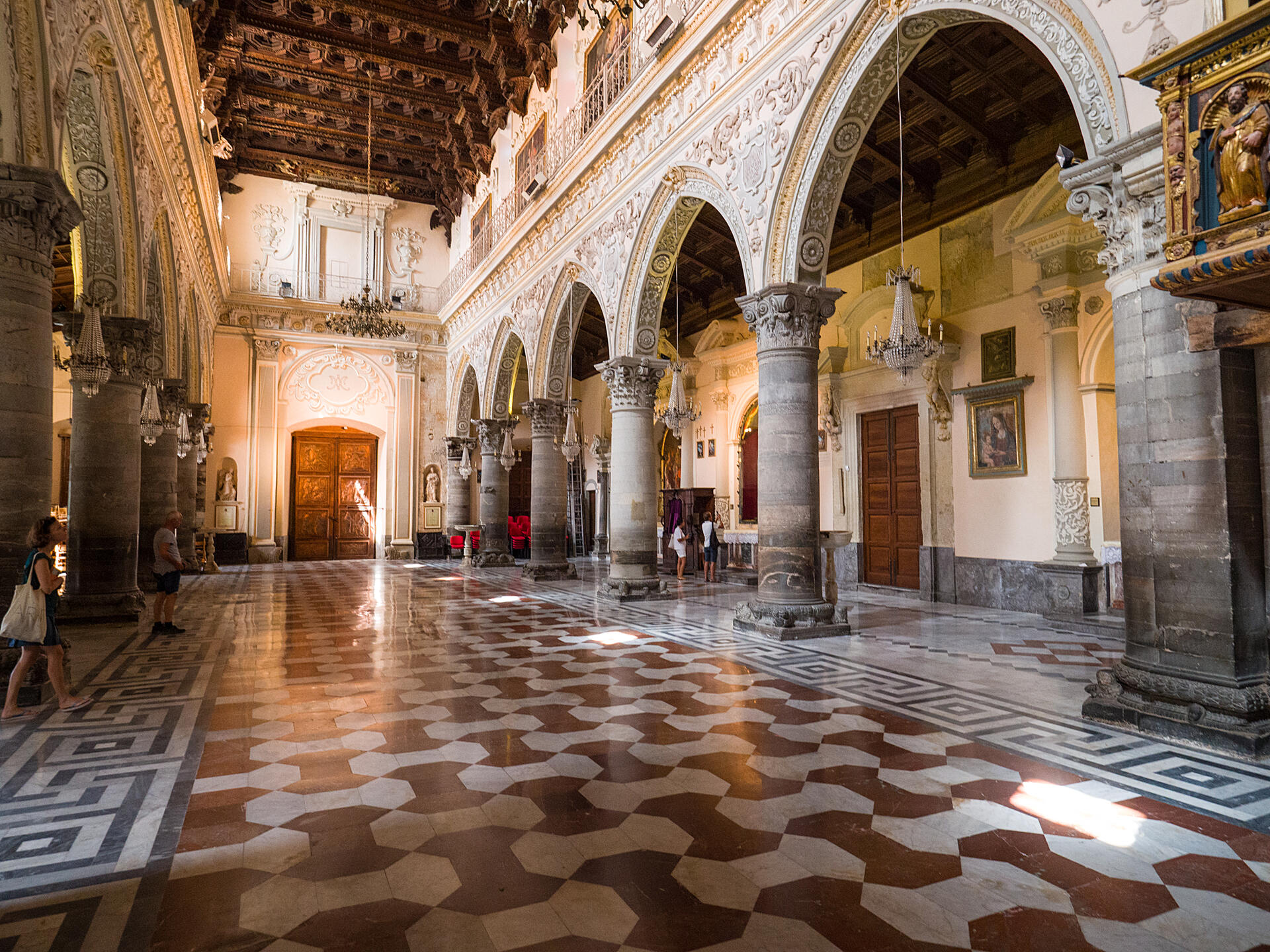 It was built in the Middle Ages, of which it is the main architectural representation, at the behest of the Queen of Sicily Eleanor of Anjou, as an act of celebration for the birth of her son Peter.

The Cathedral is majestic from the outside, with a façade featuring splendid elements of Gothic and Sicilian Baroque styles, which blend together to create an architectural work of absolute beauty. 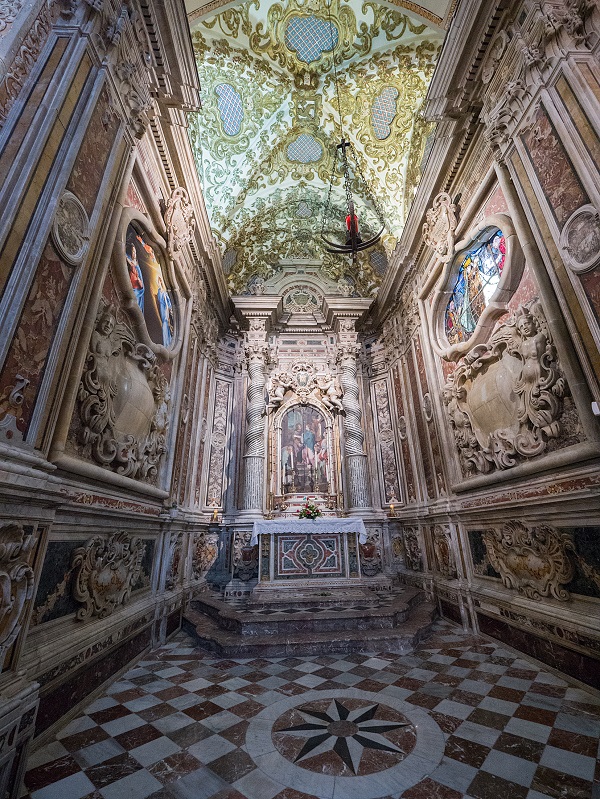 4 – The spectacle of faith: the Feast of Our Lady of the Visitation and Holy Week

Perhaps it’s because of the intimate and cosy atmosphere that surrounds it; perhaps it’s because of its position suspended between heaven and earth, a step away from the divine. Perhaps it’s because in Enna the cult of the Mother Goddess, which spread from here throughout the Roman Empire, was professed with such devotion that it was never abandoned by the faithful, but over the centuries became transformed into the veneration of the city’s patron saint.

On 2 July, Enna celebrates the Madonna of the Visitation, with a level of public participation that makes it one of the most moving patron saint festivals in Sicily. At 7 am on that morning, it’s not the cockerel that awakens you, but the sound of 101 volleys celebrating the city’s patron saint. 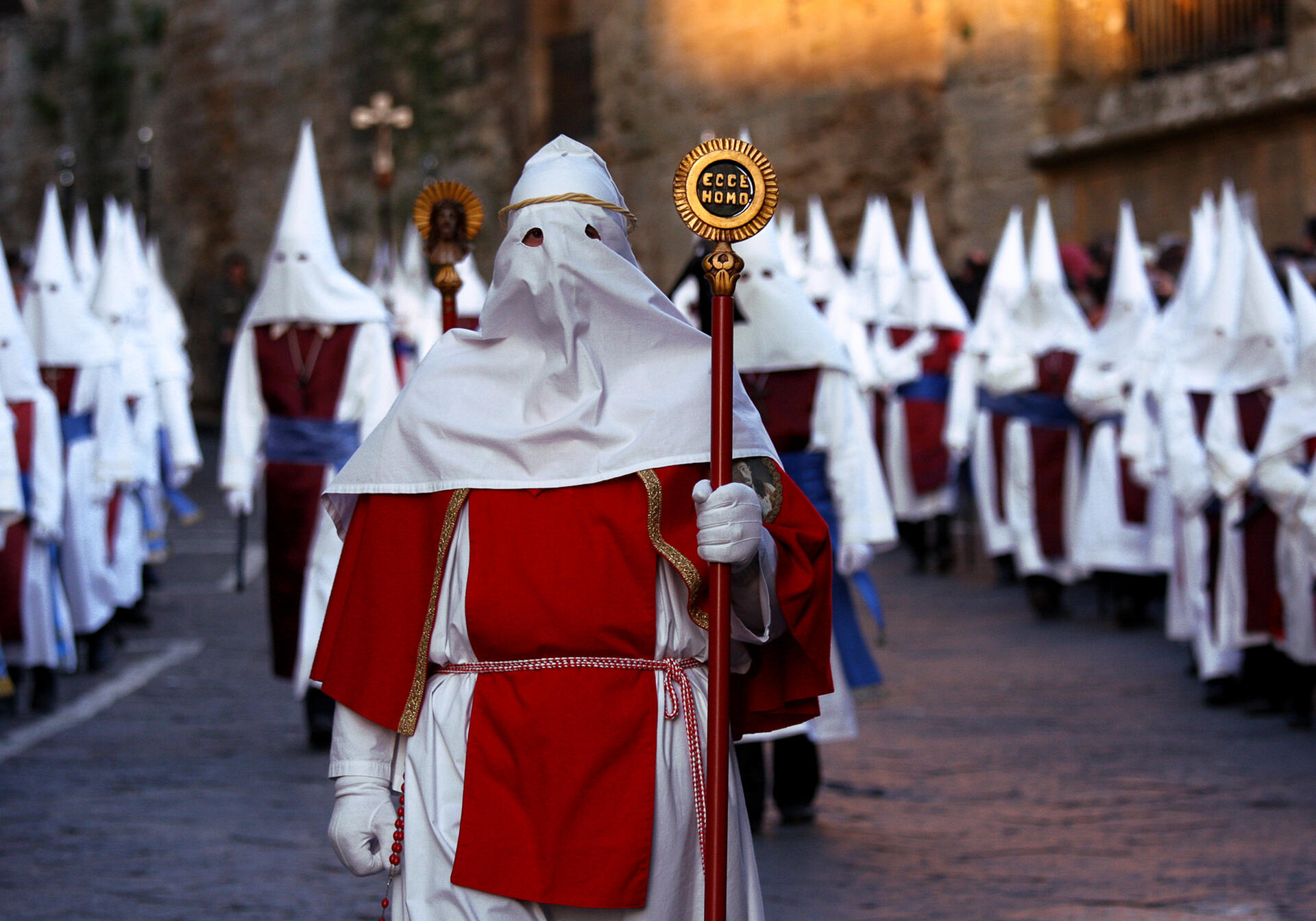 The statue of the Madonna, covered in gold and precious stones, is placed inside a “Vara”, a large procession float called the Nave d’Oro (Golden Ship) and carried in procession by 118 bearers (the “ignudi” – the naked ones).

But among the religious rites in Enna that you must attend at least once in your life are those of Holy Week. A legacy of Spanish domination on the island, it calls for the participation of a large part of the city’s male population.

When “la paesana“, the fog, as the people of Enna call it, descends, the atmosphere becomes even more suggestive and appropriate for prayer.

. Between the sacred and the profane, we cannot but mention gastronomic tradition. On Easter Sunday, abbuttunatu lamb and stigliole are a must. And on Easter Monday, everyone goes to the countryside for a meat barbecue, accompanied by a selection of fried food with fresh broad beans and local wild herbs, such as fennel and mazzareddi, and delicious artichokes cooked in ashes. To finish off the meal, sweet fried ricotta ravioli.

Find out more about Holy Week in Enna and the churches and confraternities on izi.TRAVEL

The Lago di Pergusa, a natural lake in the Sicilian interior, is a key migratory area for many species of birds, as it is situated along one of the main migratory routes in the western Palaearctic region.

It is an ideal stopping place for thousands of aquatic birds in transit to Africa. Ornithologists can easily spot teal, wigeon, shoveller, pochard, coot, marsh harrier and ferruginous duck. Mammals include porcupines and weasels, reptiles such as marsh tortoises and various amphibians.

The church of San Marco, with the adjoining cloistered convent of the Discalced Carmelite Nuns, was built on the ruins of an ancient synagogue that marked the boundary of the Jewish ghetto, still remembered today by the name given to the area the Iudeca. It has a single nave in Baroque style with sumptuous stucco work inside that contrasts with the severe linearity of the exterior façade.

Like an open-air museum, the Parco Minerario Floristella Grottacalda joined the two disused sulphur mines of the same name.

An example of the industrial archaeology settlements of southern Italy, it offers an opportunity to learn about sulphur extraction and smelting techniques from various periods.

You can see the “calcaroni” (circular furnaces for smelting), the “discenderie” (semi-vertical tunnels), the “castelletti” and the vertical shafts, the Gil furnaces (a more modern system for smelting sulphur).

The fascinating Palazzo Pennisi, the ancient residence of the owner’s family, dominates the Floristella mining complex. With its water collection works, it is an artefact of considerable historical as well as architectural interest.

The small town of Piazza Armerina, with its medieval layout in the green woods that surround it, is famous for its historical and archaeological heritage.

Walking through the numerous rooms and long corridors of the Villa Romana del Casale is like delving into ancient Rome.

Aidone is a small and characteristic town in the Monti Erei. It is located in one of the most interesting cultural and natural areas of central Sicily: the important Sicilian-Greek-Hellenistic site of Morgantina and the Villa Romana del Casale, a UNESCO site, are both on its territory.

If you walk through the centre and listen carefully, you will find yourself listening to one of Sicily’s Gallo-Italic dialects. A visit to the Archaeological Museum, furthermore, will enable us to understand why this is the “city of the godess”.

The Enna tour continues on izi.TRAVEL

Take note of the IGP and DOP products guaranteed for excellence and typicality – you absolutely must try them.