Troina, an ancient city into the heart of the island, can be reached through an extraordinary territory, incredibly rich of valleys, hills and mountains, sometimes little known even by Sicilians.

The origins of the city date back to prehistoric times but it experienced the most glorious period of its history only during the rule of the Byzantines, the Arabs and, later, with the Normans.   The Great Count Roger I of Sicily,  a member of the House of Hauteville, of  chose it as an outpost for the conquest of the whole island and, thanks to the help of some Basilian monks, he took over the Saracens Castle, then had new churches and convents built, so that Troina soon became the first capital of the County of Sicily  and a Episcopal See, and gained a central role as a transit route along the Taormina-Termini road axis. 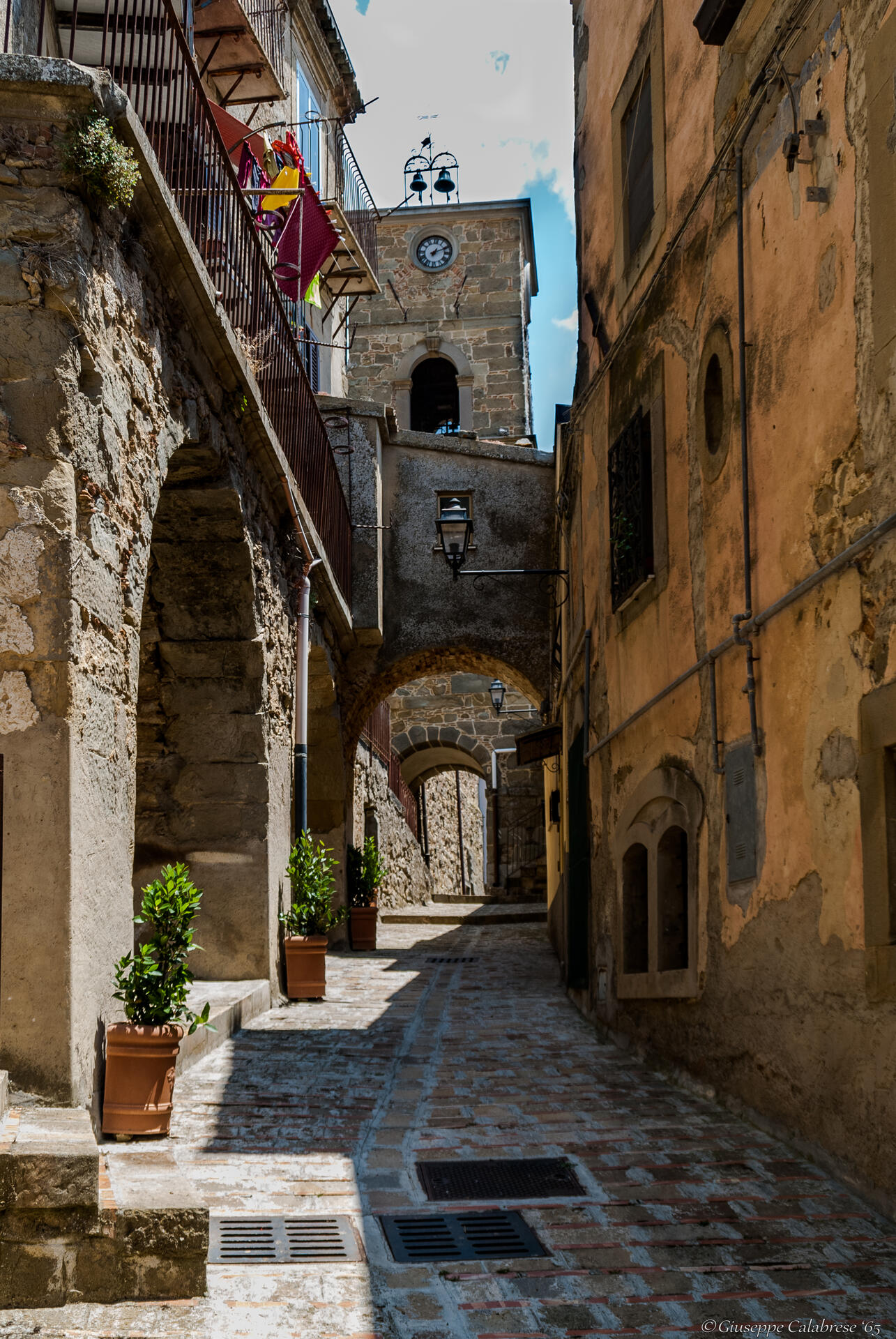 Here in Troina we find the first cathedral founded by the Normans in Sicily.  Dedicated to Maria Santissima Assunta, its the main place of worship in the town and it keeps a lot of artistic treasures, including a fine Norman tower. The Oratorio dei Bianchi, raising close below, still preserves the predella of the altarship from where Pope Urban II celebrated Mass in 1088, as a result of the agreement with Count Roger. Another historic building is the Torre Capitania, the old Castle central tower that was the seat of the Captain of Justice. Today it is a cultural center that hosts several exhibitions, including a permanent archaeological exposition and other contemporary artists performances. 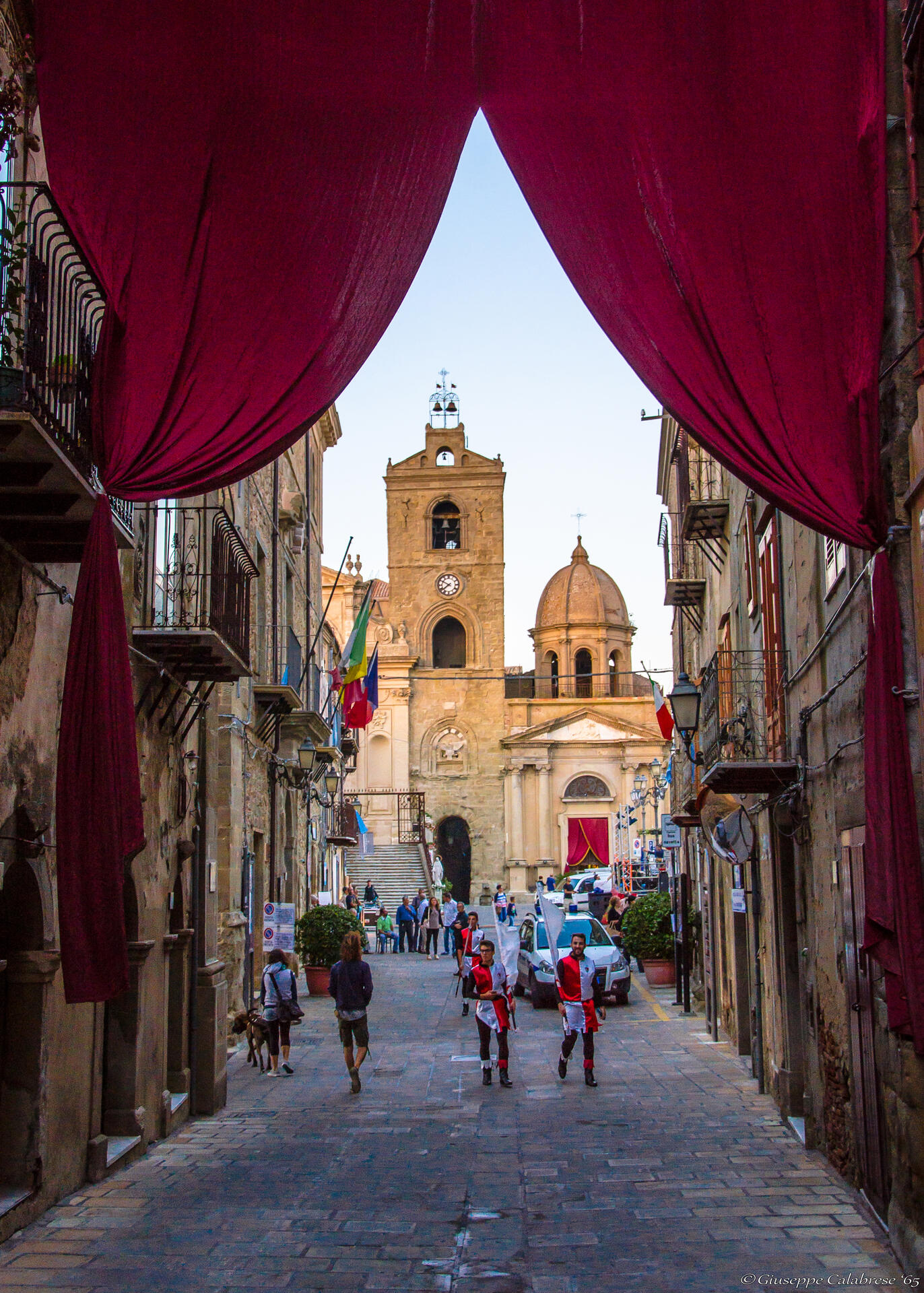 Troina provides an interesting archaeological itinerary, through which you can discover the remains of the Hellenistic-Roman city and the ruins of the fortification walls dating back to the 4th century BC, besides a rich architectural heritage, mainly consisting of churches and religiuos buildings.
The middleage Church of San Biagio, the Church of San Nicolò with a characteristic arch under the bell tower, maybe one of the old City gates,  and the Church of Santa Lucia are all located in the ancient Scarfolio district .  The Chiesa del  Carmine, with a 16th-century bell tower ending in a cusp,entirely covered with coloured ceramica, still keeps a statue of Our Lady, credited to Domenico Gagini.  The tour continues with a visit to the Church  dedicated to San Silvestro, the Basilian monk and the patron saint of the city, whose remains  lie here and whose funerary monument is also credited to  Gagini.  he artistic Baroque feretory, the work of the worldknow Sicilian silversmiths Juvarra from Messina, is proudly displayed in the Convent of Sant’Agostino (XV century) famous for its suggestive loggia made up of 40 arcades. 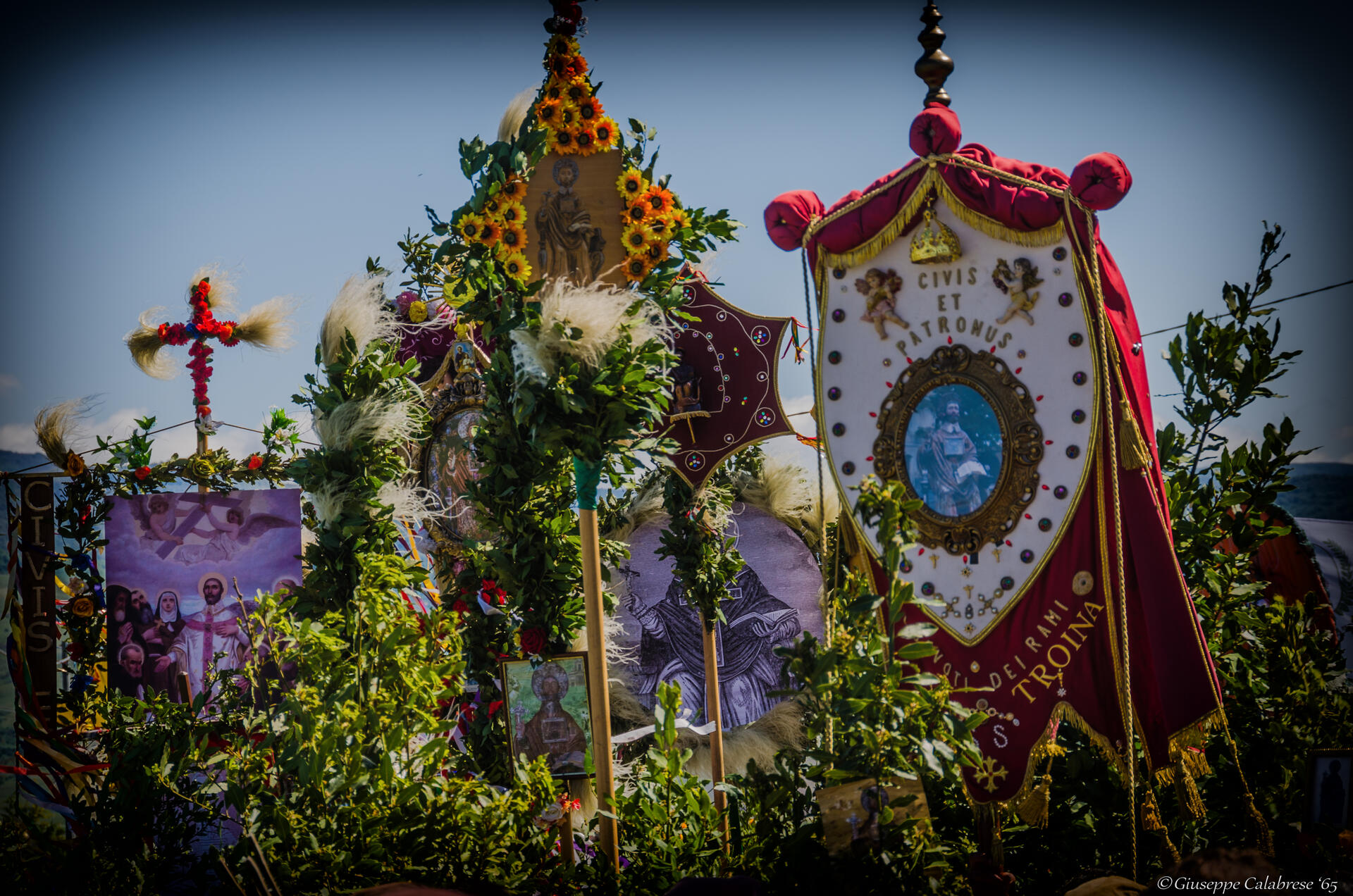 A millenary charming town , able to enchant and ravish you with its stories told through its traditional rites, such as the “Festa dei Rami”, which takes place on the penultimate Sunday of May, or the Ddarata, held on the following Sunday, and even its famous Intrallazzate, old Sicilian folk songs in verse.

The “Festa dei Rami” (Branches Feast) , an ancient rite dating back to the pre-Christian period, is the pilgrimage that hundreds of devotees make in honor of the town Patron Saint, San Silvestro. The ramara  (branches pickers) , only rigorously men, after the evening mass, start their pilgrimage along the ancient mountain paths, and towards the early morning, they reach the small sacred wood into the heart of the Nebrodi Mountains The following day, the pilgrims summoned by the sound of a drum, move to the Anghira di Faccilonga ravine, a natural sanctuary, where only the bravest, with the help of some ropes, rappel down along the hillside to pick up the laurel.  The ramara then go back to the village carrying splendid decorations made with the laurel leaves. Here they are welcomed by the villagers who offer them any sort of traditional food, associated with the feast. 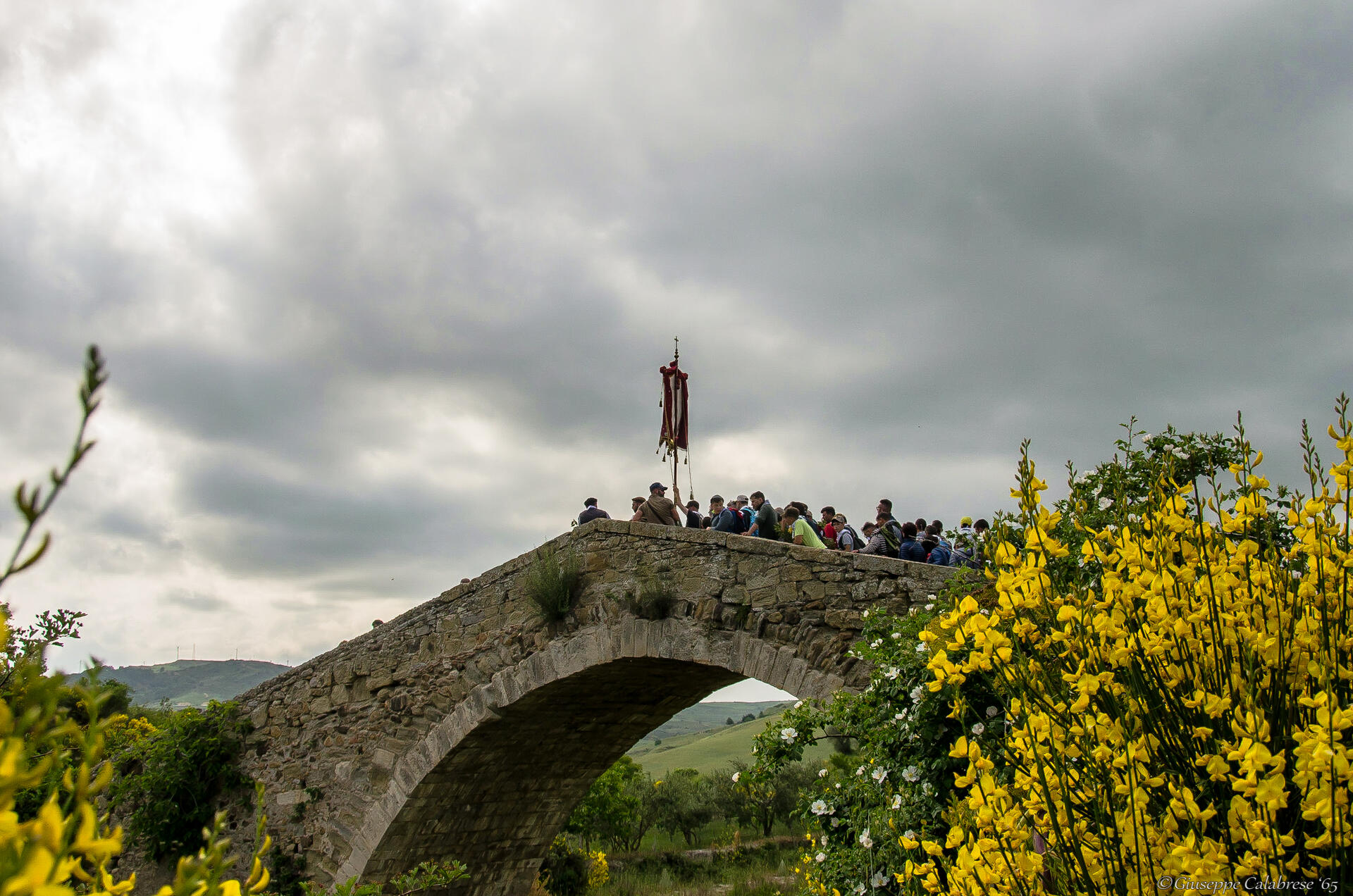 Failla Bridge with the passage of the “ramara“ – ph. Giuseppe Calabrese

A very special local dish is the vastedda cu sammucu, a focaccia made from durum wheat flour and eggs, stuffed with tuma (fresh cheese) and salami, sprinkled with elderflower and cooked in a wood-fired oven. The ‘nfasciatieddi are the typical biscuits made with mulled prickly pear wine. But don’t forget to taste the cudduri, Christmas desserts, and the typical piciocia, an ancient peasant dish made with chickling vetch, chickpeas and peas..

Recent history reports a historic battle that took place in Troina, between the German soldiers, who had settled in the village, and the  American ones. This struggle culminated in a heavy bombardment that provoked several victims, including many civilians. The historic event is widely documented by the shots of Robert Capa, collected and displayed at the Capitania Tower 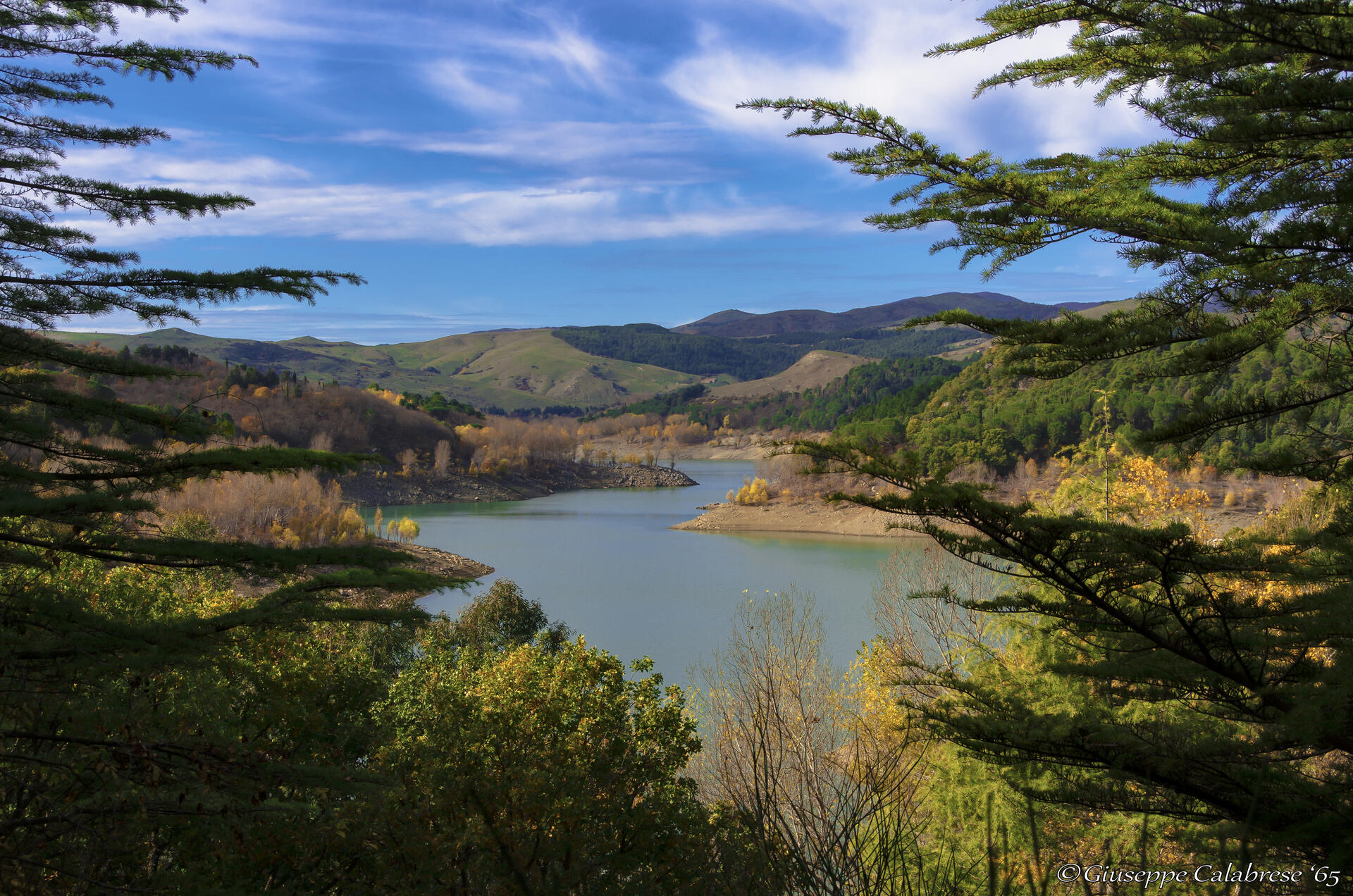 And finally, how not to mention the rich natural heritage of the area?! Troina, in fact, is located inside the Nebrodi Park. A few kilometers from the town there is Lake Sartori (or Lake of Ancipa), the highest artificial lake in Sicily, immersed in a 4,200 hectares wooded area, ​​suitable for long walks or horse riding.