A beautiful small island, unique and largely untamed, with welcoming inhabitants. A paradise for scuba diving and fish, with extraordinary seabeds and a marine reserve rivalled by few in the Mediterranean, and very well-equipped diving centres. A fascinating history.

This is Ustica: a jewel rising out of the sea spray.

The magical island of Circe is immersed in the blue Tyrrhenian Sea only 67 km from Palermo. In less than 9 square kilometres there’s history, art, nature, adventure and culture. It has a fantastically mild climate and scanty vegetation full of olive and almond trees, vines, broom and the characteristic Mediterranean steppe.

Ten ways to explore it!

Cala Sidoti, located on the eastern side of the island, has a shallow seabed near the shore and is therefore recommended for children.

Right next to it are the Scogli Piatti, flat rocks ideal for relaxing in the sun in a picturesque setting.

Piscina Naturale is a clear stretch of water surrounded by a cliff and communicating with the sea under the Punta Cavazzi lighthouse. 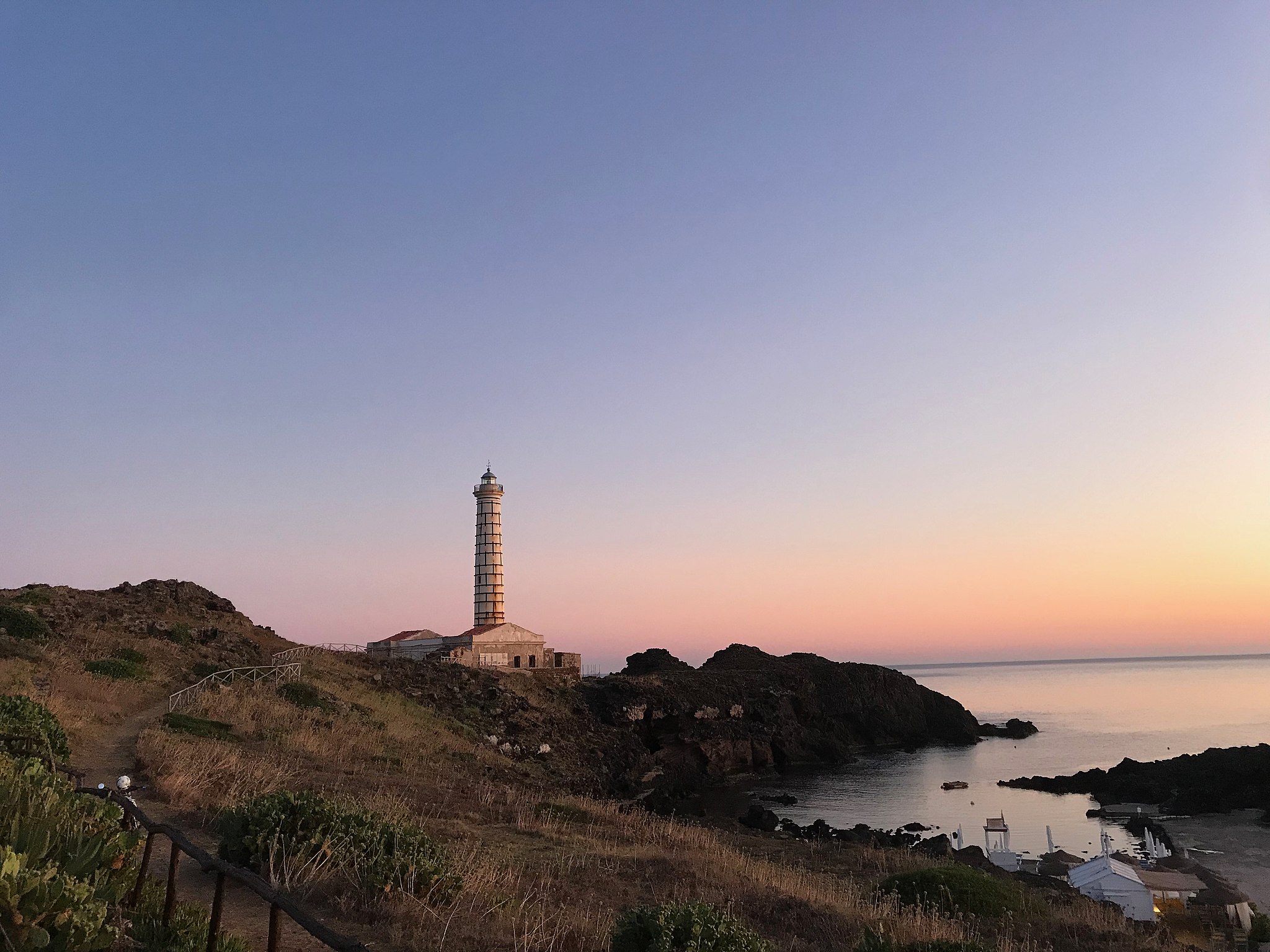 In the northern part of the island, near the prehistoric village of Faraglioni, there are the small coves of Curruggio beach.

Treat yourself to a boat trip in the caves and be enchanted by Ustica’s sea in all its shades of light and colour. 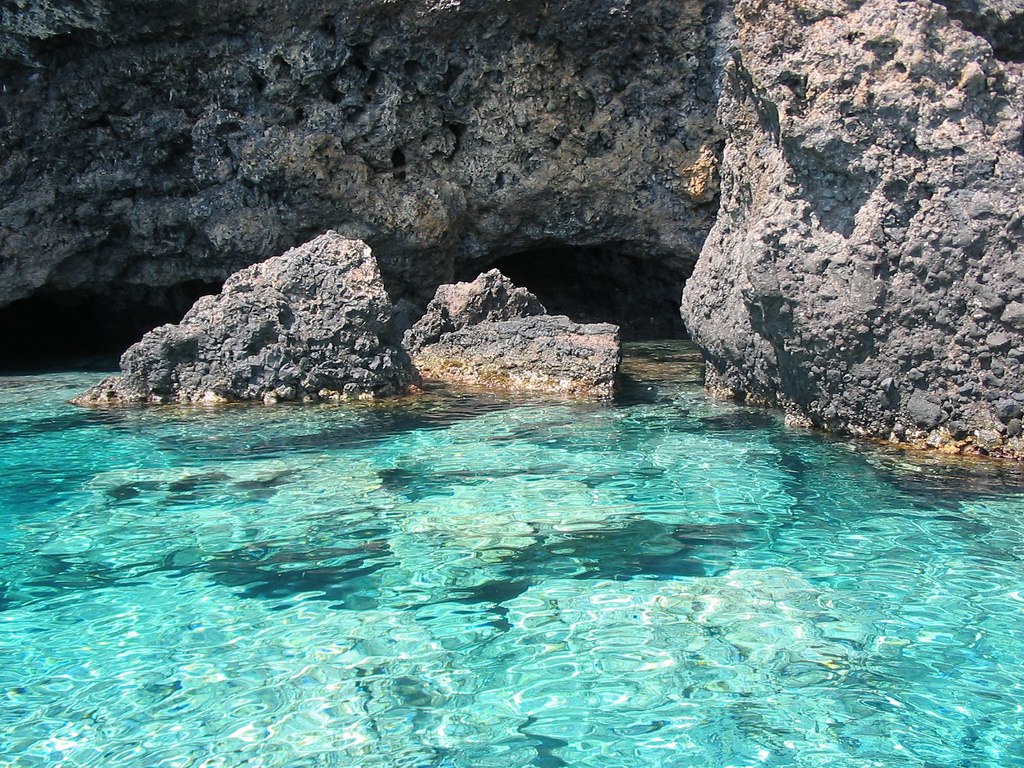 Ustica is the site of Italy’s first Marine Protected Area and offers truly unique wonders of Mediterranean marine flora and fauna. Ustica is thus a marine and archaeological paradise just waiting to be explored, especially by divers and lovers of the sea. There are various beautiful seabeds to choose between.

Near the Scoglio del Medico there are some marine fauna now rarely found in the Mediterranean, principally barracuda, grouper, sea bream and amberjack.

Punta Galera and the Scoglio del Medico make one of the most fascinating areas for diving due to the presence of the Grotta dei Gamberi, with its colony of small crustaceans with antennae at a depth of around 37 metres. 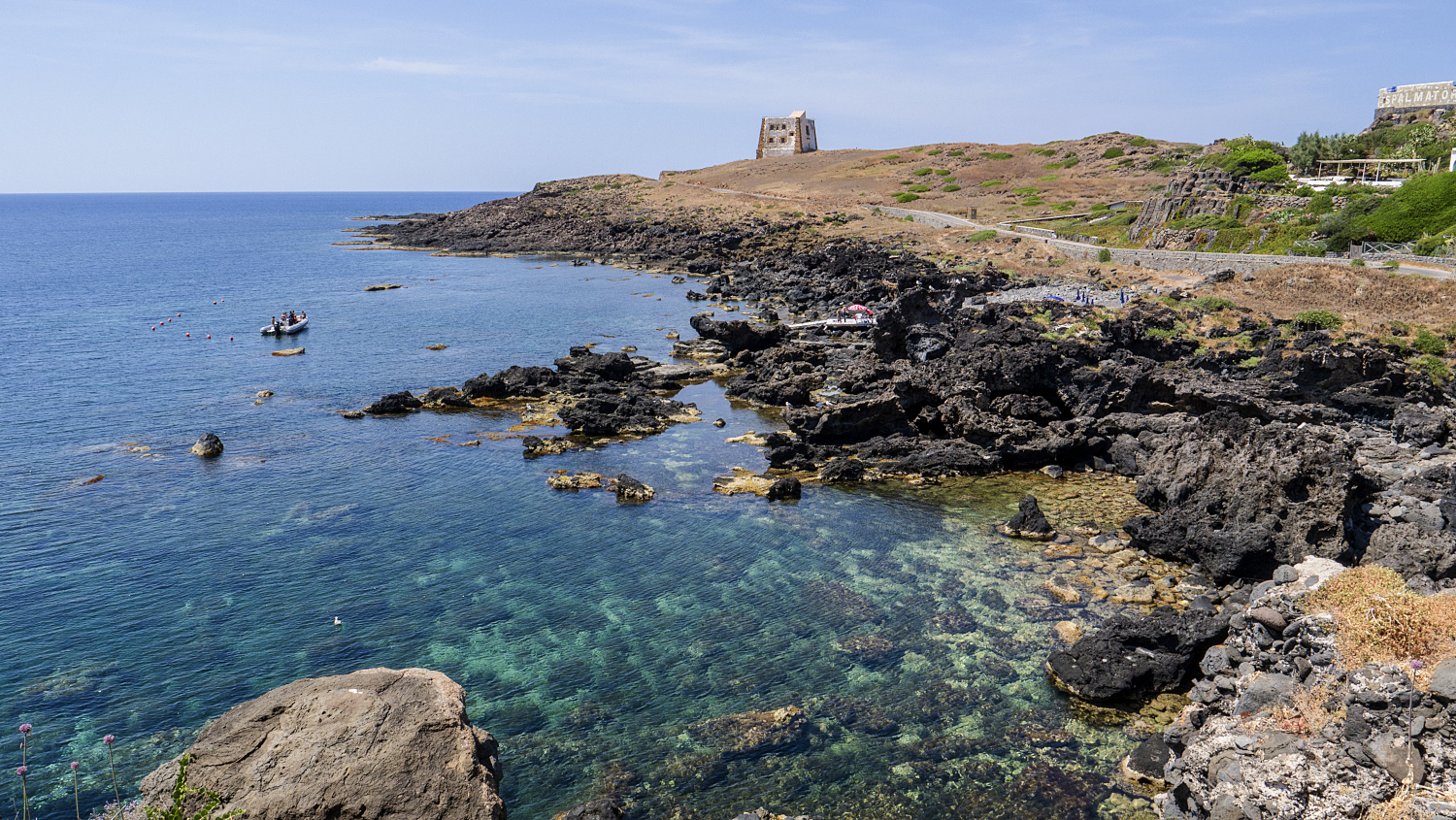 The Secca della Colombara starts at a depth of only 3 metres and you’re soon face to face with a breathtaking vertical wall of columnar basalt which drops down precipitously to 30 metres.

The sandy Secchitello seabed with its large boulders is entirely covered by benthic organisms and by white sand which reflects the surreal atmosphere’s sunlight.

In the Grotta delle Cipree you’ll see a unique spectacle: stalactites and tree roots hanging down over the water.

Punta dell’Arpa, at a depth of 35 metres, is recommended for those with an advanced scuba diving licence; there’s a rockfall of large boulders after which you reach rocks literally covered by red gorgonia coral.

The area’s topography inspires you to walk, so as to discover the native species of the Riserva Orientata Isola di Ustica. The nature reserve’s paths run over gentle slopes, reminders of its volcanic origin, allowing you to enjoy vivid landscapes surrounded by the blue sea, the azure sky and some magnificent sunsets. The varied and unique Mediterranean scrub changes with the seasons with a mixture of contrasting colours.

The southern Sentiero di Mezzogiorno route starts from the Torre di Santa Maria, a tower built by the Bourbons. You’ll get a brief, extraordinarily beautiful view over Cala San Paolo where, if you look carefully, you’ll see the faint signs of a deep fissure (the Spaccazza di San Paolo) descending steeply into the seabed. The path continues through Punta Galera and ends at Punta Cavazzi.

Rocca della Falconiera is an ancient archaeological site from the early Christian era and a viewpoint offering truly enchanting views: you can admire various underground tombs (3rd century BC) and a late Roman necropolis with rock-cut tombs.

The Sentiero del Bosco is an evocative walk through large areas of Mediterranean woodland. It starts in the north of the island and follows the road used by the charcoal burners who exploited the island’s natural resources.

This northern coastal path starts at Piazza del Municipio and runs along Via Petreria in the direction of Tramontana. After thirty metres the road forks by a small building which used to mark one of the boundaries between with neighbouring villages. On the right wall there’s a marble plaque placed here on 13 May 1906 in memory of the visit by the reigning Vittorio Emanuele III and Queen Elena after a very strong earthquake on the island. Take the cobbled road and then cut across a road on the right which leads to the Falconiera and continue to reach a beautiful view of Cala Giaconi and the cliff which overlooks it. 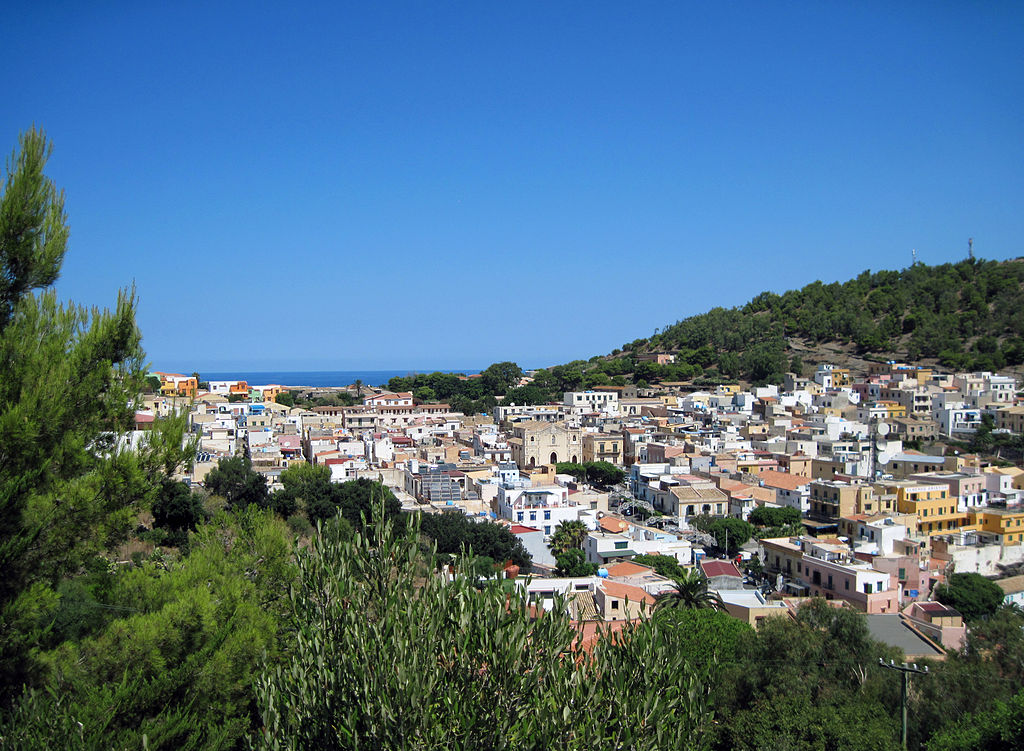 After the bend, there’s a stone aedicule dedicated to the Madonna, built in the 19th century by a local islander where a sentry box once stood. There’s another beautiful view along the northern coast of the island from here. Continue on and you’ll come across the Scoglio del Sacramento on the right, famous for its shape.

Still further on there’s the Gorgo Maltese, once used to collect rainwater and also used by the Romans. At the northernmost point of the island, you come across the Prehistoric Village of Faraglioni.

The thrilling idea of riding through an ancient village’s streets and over fabulous nature trails on the back of a lovely donkey, is really possible on Ustica.

An enjoyable route, also suitable for children, will transport you back in time and make your holiday unforgettable.

On foot, the path around the island takes 5–6 hours. The climb up the wooded hill (monte Guardia dei Turchi, 244 m high) is much shorter. On the way you may see wild rabbits and, up in the sky, hawks. You can rent bikes at the port: there are challenging climbs and descents (slopes greater than 1 in 5) and flat stretches. Don’t let yourself be distracted by the view!

Ustica’s lentils, a recognised Slow Food Product of the Islands of Sicily, are unique and delicious. The pizza Usticese is a simple but tasty local delicacy, prepared with tomato sauce, anchovies, garlic and a few breadcrumbs. 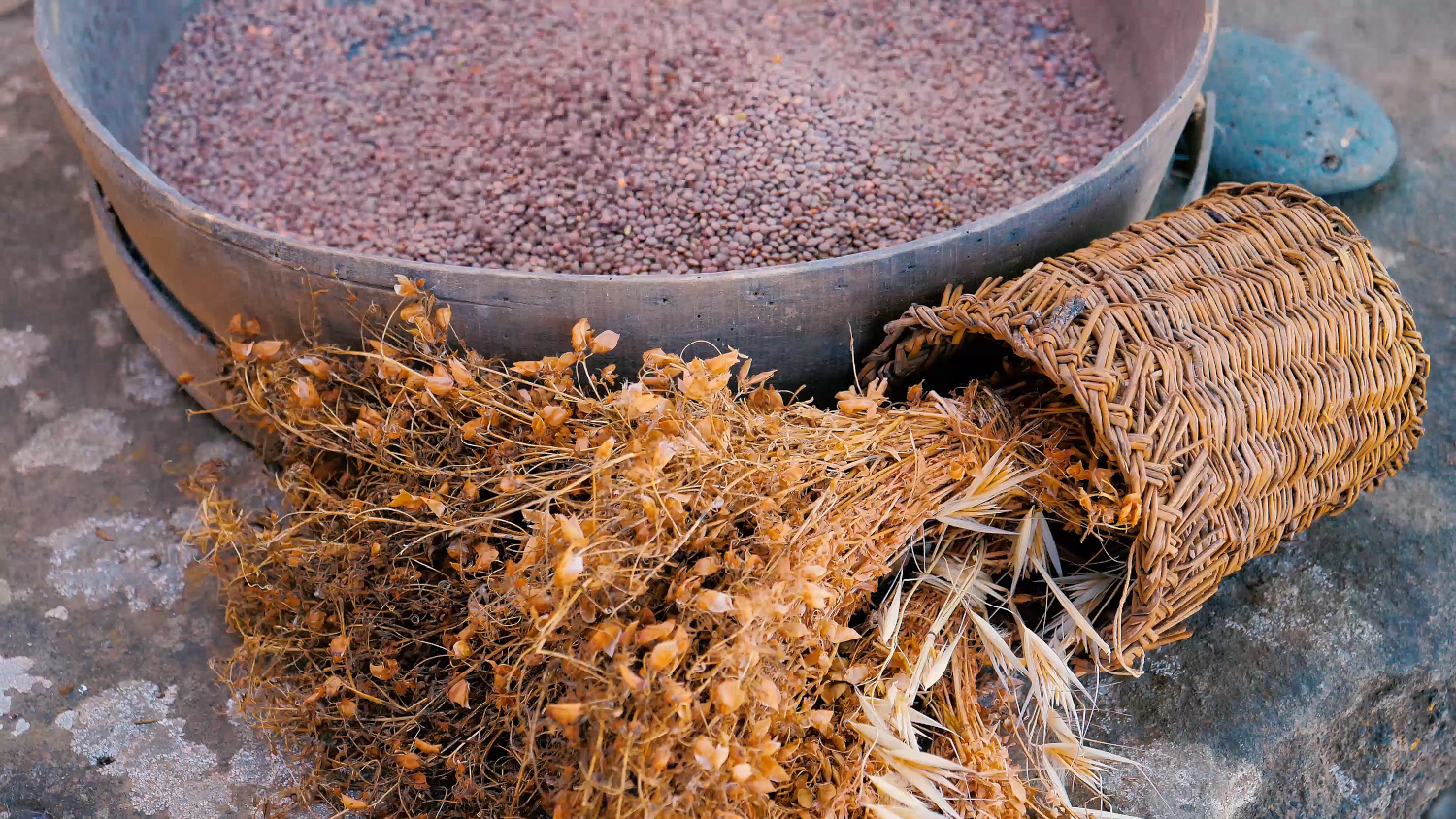 The island produces excellent wines, the outstanding variety being the zibibbo grape from which a delicious passito (straw wine) is made. Don’t forget to try the preserves produced on the island itself with local raw materials.

An open-air history book of both land and sea. Burials, tunnels and masses of archaeological finds, some even found underwater because of the many shipwrecks, testify to the constant presence of humanity since the Palaeolithic Age: the Phoenicians, the Greeks (who called it Osteodes), the Carthaginians and the Romans, who gave it its current name (from ustum, meaning burnt). For a long time, it was also the base and refuge of Saracen and Barbary pirates.

First of all, there’s the Prehistoric Village of Faraglioni, a settlement dating back to the Bronze Age with circular huts defended by a strong wall.