This small town in the south-east was founded again in the 1700’s. It is the heart and  the starting point  for a visit to the valley of the Sicilian Baroque. Its cathedral, perfectly raised and rebuilt again after 10 years of difficult work, was included in the UNESCO World Heritage Sites. 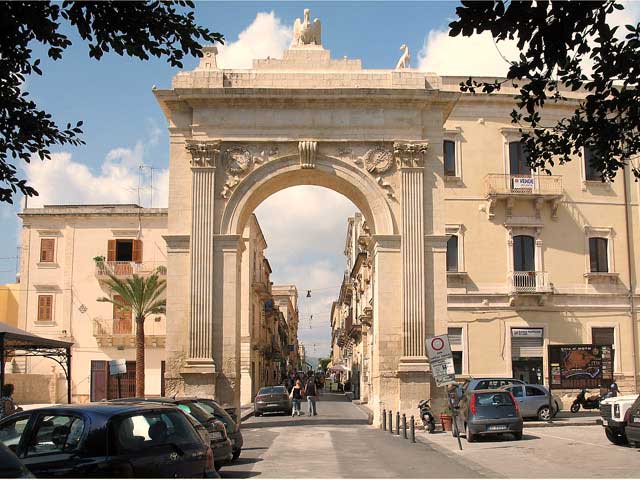 Let’s do things right: enter the city from the east, passing under the Arco di Trionfo which will lead you to the Corso Vittorio Emanuele, the heart of Noto. Ferdinand de Bourbon in 1838 did the same thing, inaugurating the monument. Look up: three symbolic sculptures on the top stand out: a crenellated tower – power, a dog – the loyalty and at the centre a pelican – the sacrifice.

Also this royal gate was built with the characteristic golden yellow limestone used to build the churches and palaces of the city. It is a very unique limestone due to its flexibility and that is why it has been chosen to enable the elaborate cutting of the monuments and also because it gives off a strong light. When the sun sets, you’ll find out that this warm colour mixes with the sunlight, creating an atmosphere that grabs your heart. 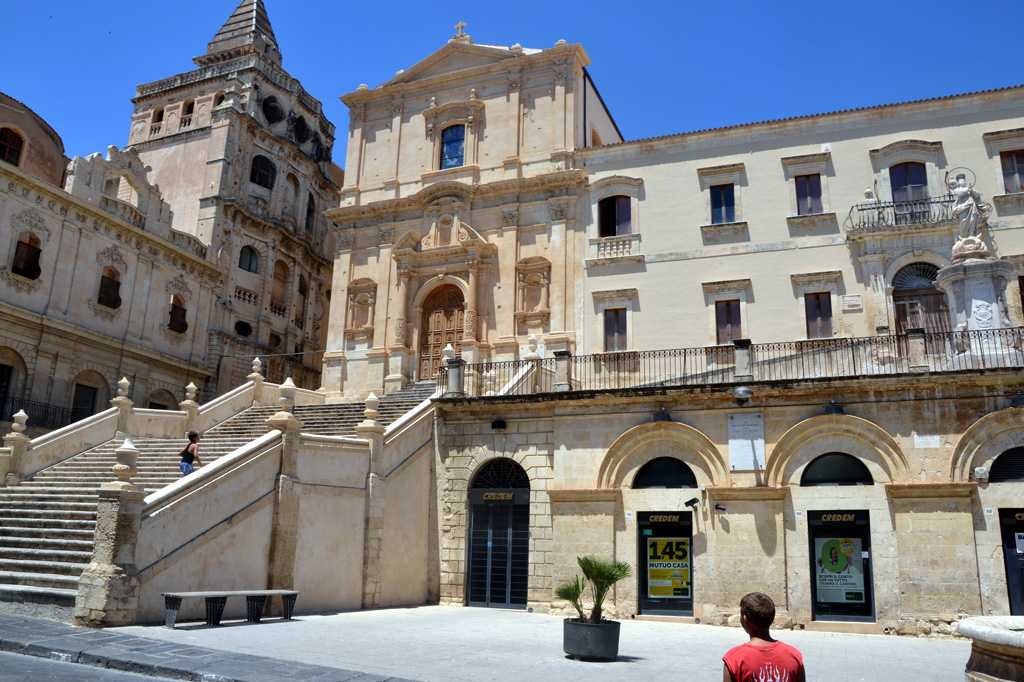 Enjoy the stroll, it’s nice to walk up and down this street. On the right above the piazza Immacolata, you will come across the Church of Saint Francis Immaculate which stands on top of an impressive staircase. Inside the church of the 1700’s, there is a single nave, in accordance with Franciscan use and white walls decorated with rococo style stuccoes. Attached to the church there is a Franciscan monastery.

This is only one of many churches that you will come across along the way. As you know Noto was built after a powerful earthquake. This has given architects the freedom to design and create a most spectacular urban settlement. The three main roads are all oriented from the east to the west in order to be always illuminated by the sun. The urban design had also conceived them to be addressed to the three main social classes: the Corso was for the clergy, the upper part was for the nobility and the lower one was for the people. That’s why you will come across many churches along your way to the corso Vittorio Emanuele. 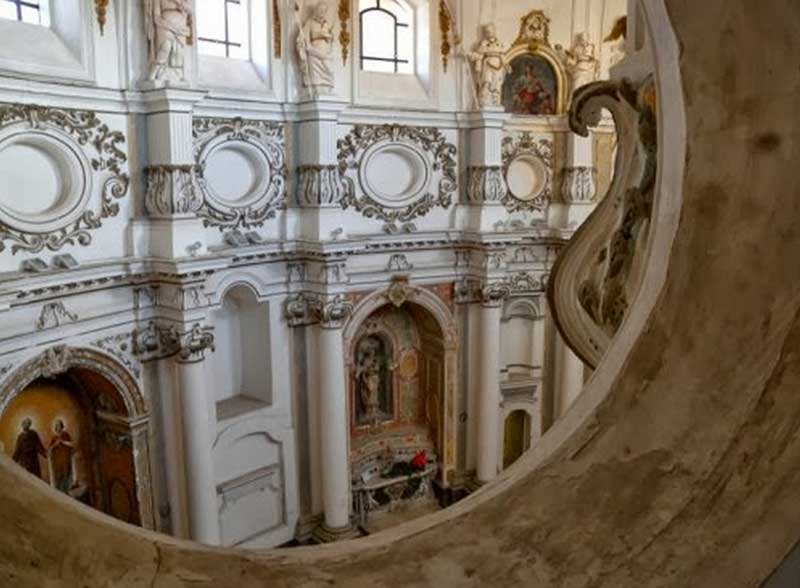 The Church of Santa Chiara, on the left side of the corso, conveys a very delicate baroque style. The interior is small and oval, adorned with stuccoes and cherubs. It is well balanced by the twelve columns. Continue onto the adjoining cloistered convent, it is an interesting world to discover and from the terrace there is a beautiful view. 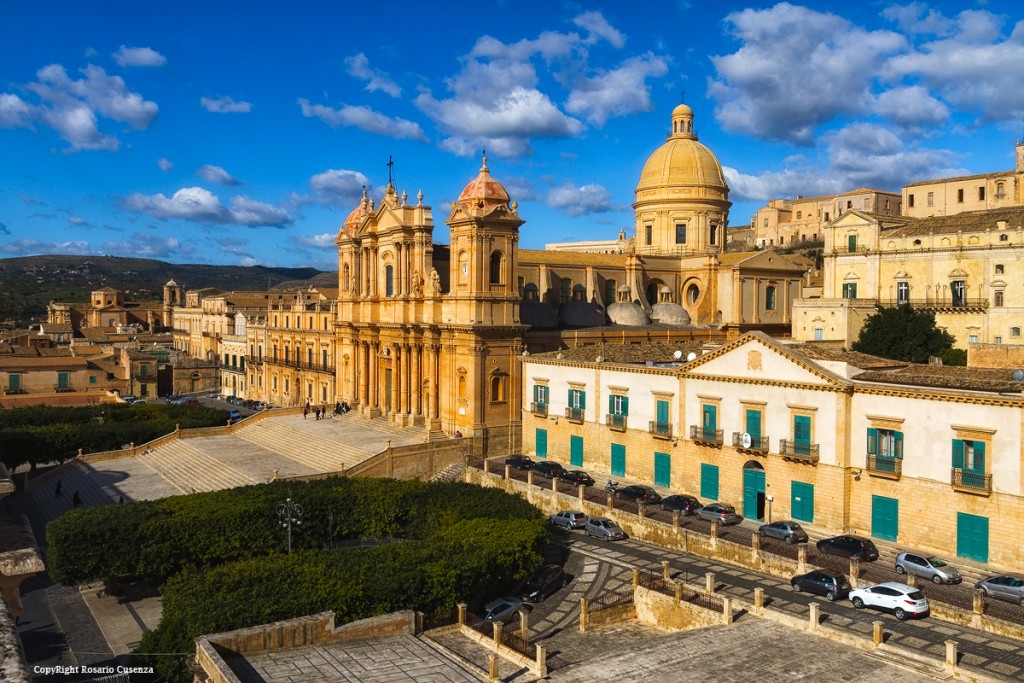 The Cathedral, which stands on top of a monumental staircase, was begun a few months after the earthquake but was only completed in 1770. The façade, quite unadorned of ornamentation and extravagance, incorporates baroque motifs and classical elements. The three aisles of the church are divided by tall pillars. In the chapel at the bottom of the right aisle is kept the silver urn of San Corrado, the patron saint of the city. Some of us remember the collapse of the dome in 1996. In our mind,even now, the News footage telling the desperation of the poor priest who fled to safety from the sudden collapse. The reconstruction was completed in more than 10 years with a combination of modern techniques and those of the 1700’s using the materials of that time. A really good job which is now the symbol of the rebirth of the area. It is also included in the list of world heritage assets UNESCO. 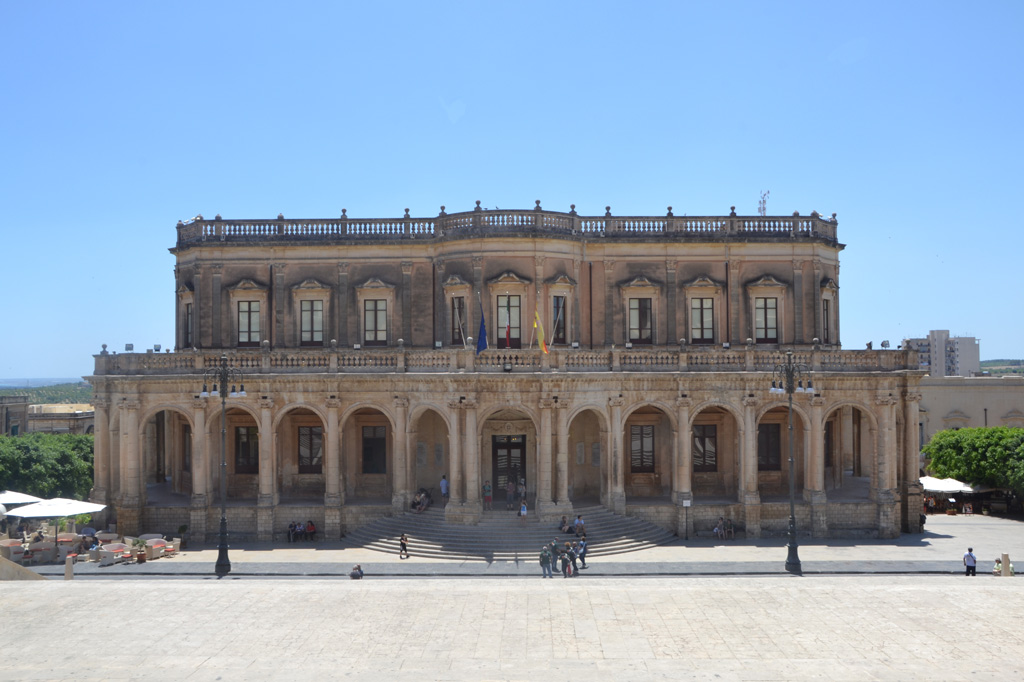 Opposite the cathedral there is the Palazzo Ducezio, which houses the Municipal Hall. Designed by the architect Sinatra, the palace is raised above the square on which it stands. It was built between 1746 and 1830 with a single floor. Only in the 1950s a second floor was added modifing, in this way, the original neo-classical line. Inside the reception hall is rich in gold and stuccoes.

As we continue our journey on the right, there is the via Nicolaci, famous for the flower festival, closed off by the Church of Montevergine, with a concave façade between two bell-towers. Immediately noticeable on the left are the bulging balconies of the Palazzo Nicolaci Villadorata which represent the expression of the striking Baroque of Noto. The brackets  holding them are shaped like various animals , spirals and arabesques. 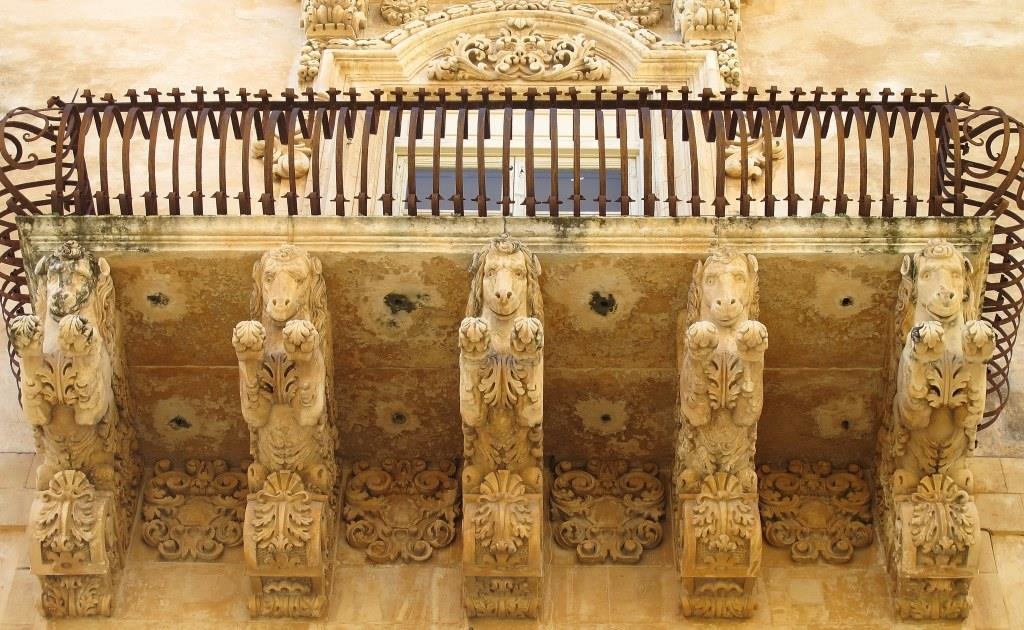 The palace, was built by the architect Nicolaci in 1731, has ninety rooms, frescoed vaulted ceilings and eighteenth-century paintings. For a long time it was the residence of the princes of Villadorata.

In May, the via Nicolaci is the protagonist of the famous and traditional Infiorata (flower festival). Team of artists make up a mosaic of colourful petals creating a carpet that covers  the road’s paving. This floral exhibition is dedicated to the world: every year the theme is dedicated to a different country. 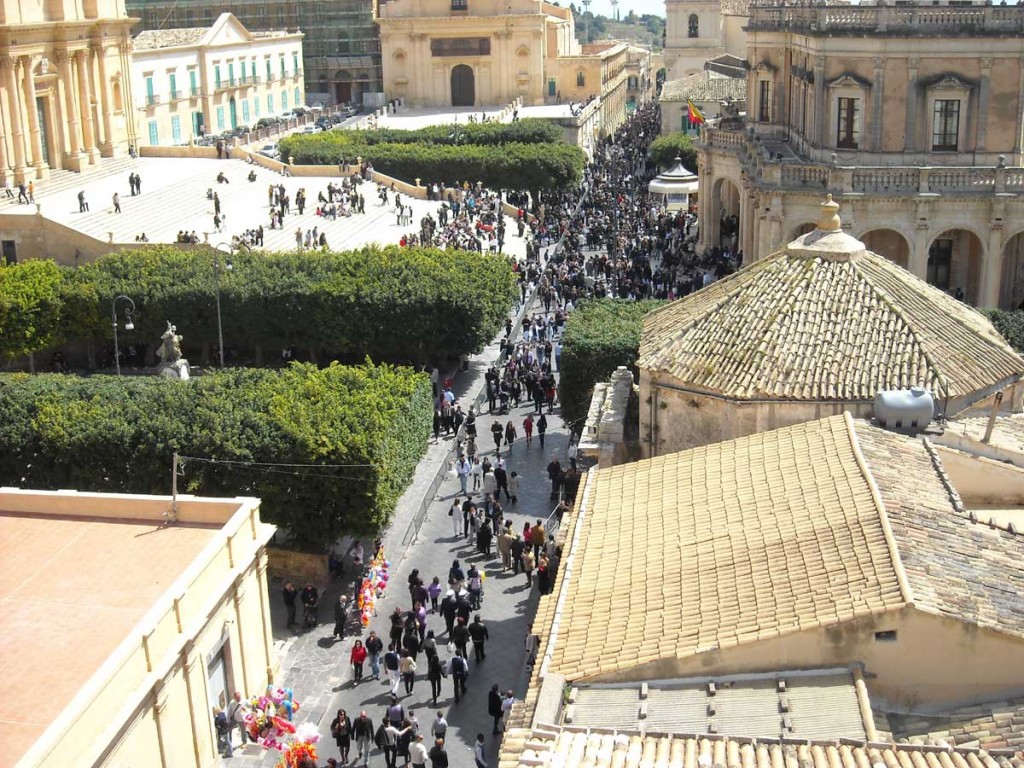 Continuing the walk on the road, immediately to the left, we find the Church of San Carlo and the Jesuit College with its large four columnsportal  topped by monstrous gargoyles. From the church, climb up the bell tower to enjoy a panoramic view of the city centre. 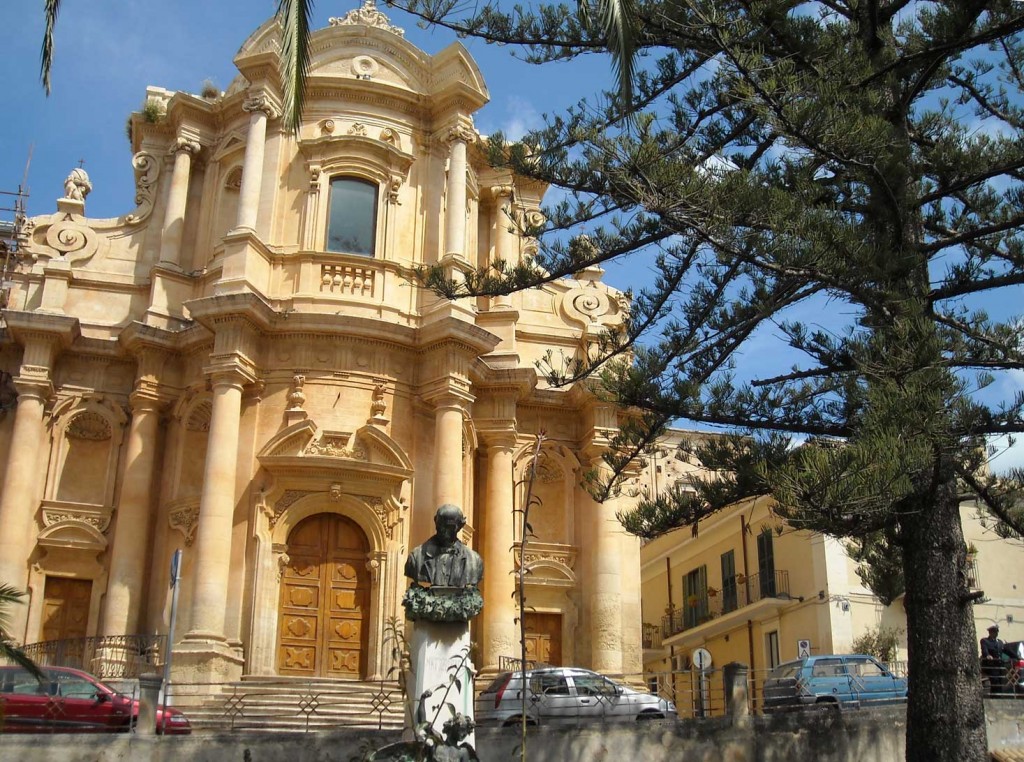 At the bottom of the street, we find  Piazza XVI Maggio with the Church of San Domenico, the small house of Hercules, the fountain and the benches to offer you a little break. Here you can admire the elegant Vittorio Emanuele III theatre. 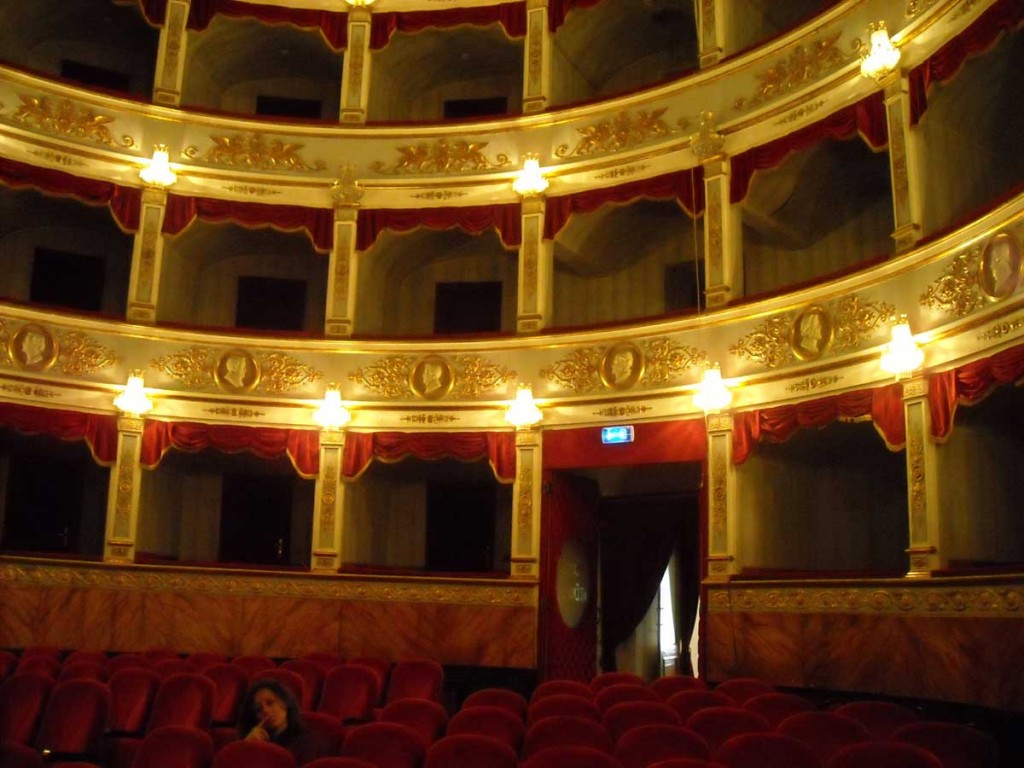 The history of Noto

Its first name was Neas. It was founded by Sican populations, at the time of the fall of Troy, on the Mendola hill. Falling into the hands of the Syracuse conquerors, the town assimilated Hellenic customs and rites, and was elevated to the gymnasium. It passed under Roman rule, as a federated city. In the imperial era, it was declared a Latin municipium, a unique condition that brought the town considerable privileges, including the right to govern itself with its own laws. Conquered by the Arabs, who made it a highly armed stronghold, it took its present name and was the capital of one of the three valleys into which they subdivided Sicily. After two centuries of Muslim rule, in 1090, Noto negotiated surrender with Roger. 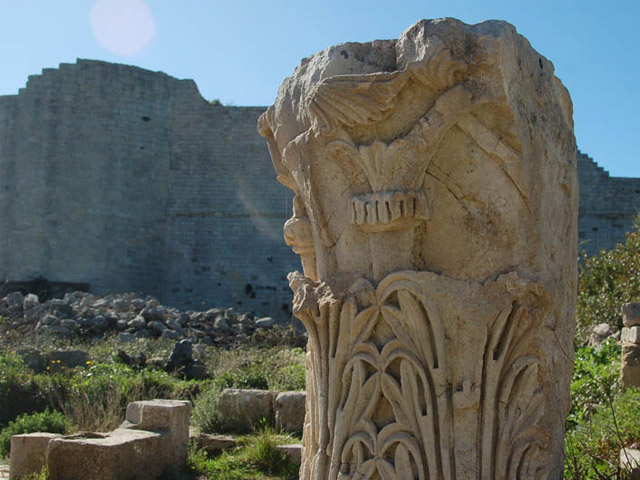 The history of Noto, however, has been made by men and by nature. In 1693, it was, in fact, destroyed by the earthquake that strucked the whole of south-western Sicily. Designed as a large theatre without wings, it was conceived as a free and open city lively and continuous. Noto is sumptuous and superb, on the slope of the Meti hill, to the southern slopes of the Hyblaean mountains. The architectural history of the new city is dominated by the artistic inspiration of three architects, Rosario Gagliardi, Vincenzo Sinatra and Paolo Labisi. These three architects succeeded in developing an amazing masterpiece of architectural unity. Three different personalities who, while living and working in the province, bestowed an original mark onto the city which goes beyond the rigid Baroque language. They enriched it with elements of the Renaissance and neoclassical pseudo-Spanish elements, creating an imaginative and dreamlike style.