Madonie and Nebrodi are among the most suggestive landscapes in Sicily, a small millennial world that must be seen and savored slowly.

The Madonie mountains are ideal for hiking, horseback riding, wonderful to cross on foot, with a mountain bike, or riding a donkey.

We are in the Madonie Regional Park, a natural reserve with rare geological sites: let’s take a camera and go for a hike along the trails and roads.

Let’s start from Collesano, not far from Palermo, an ancient feudal land where many monastic orders resided and founded many churches. The art of ceramics in Collesano has its roots in the second half of the sixteenth century. Let’s visit the Museo della Targa Florio that keeps an important and evocative collection of photos, unpublished documentaries, objects and memorabilia from the hardest and most fascinating road race of all time, the legendary “Targa Florio”.

In Isnello, some great embroiderers work with the old method of filet; there, let’s go to the Museo Trame di filo.

Let’s proceed on the provincial road and, surrounded by a stunning landscape, we arrive at Castelbuono. Let’s visit the Matrice Vecchia with the statue of Madonna degli Angeli by Gagini and then go up to the Castle, which was built in 1316 by Francesco I of Ventimiglia; inside, there is the eighteenth-century Cappella Palatina, decorated with fine stucco work. Let’s not miss the Matrice Nuova, which houses works by Antonello da Messina and Giuseppe Velasquez, and the Museum Parco delle Madonie. 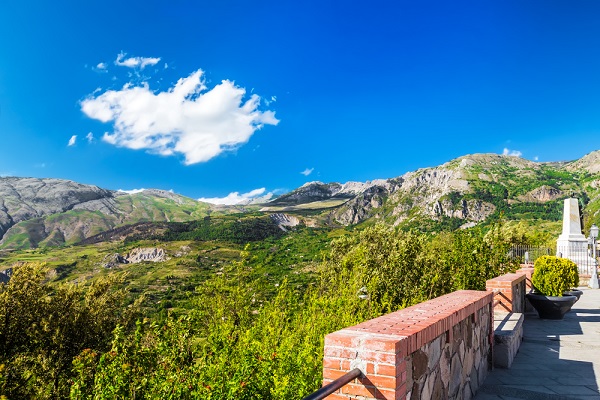 Let’s continue with Geraci Siculo, at a height of 1077 meters and dominated by the ruins of its Castle and the Chapel of Sant’Anna, built by the noble family of Ventimiglia. Many events remind of noble and peasant traditions: we are talking about the Transumanza Festival in late May, and the Giostra dei Ventimiglia, during the first days of August, when there is a revival of such traditions.

Let’s move to Gangi, one of the most beautiful towns in Italy: let’s discover its medieval system and the many churches and monuments, such as the Mother Church and the nearby Bell Tower Ventimiglia.

Let’s go toward Petralia Soprana, the highest town in the province of Palermo, dominated by the Mother Church and the nearby Santa Maria di Loreto with an elegant convex façade, inserted between two towers.

On a rocky outcrop, you will find instead Petralia Sottana. There are churches and palaces to explore along with the crafted jewelry preserved in the sacristy of the Mother Church.

Let’s take a dip in archeology, in front of Petralia Sottana, and head to the Cave of Vecchiuzzo, interesting for the study of the prehistoric Sicily: a large amount of ceramic pottery is preserved in the Archaeological Museum of Palermo.

The last stop is in Piano Battaglia: a place for holidays and winter sports, where there are facilities for skiers.

Let’s not forget to visit Cefalù, unique location of the Park, located directly on the coast: crystal clear waters, beaches, hills in the background and a rich cultural heritage. You can walk in the streets of the old town, hike to the top of the Rocca and visit the Cathedral, which is part of the Arab-Norman UNESCO. 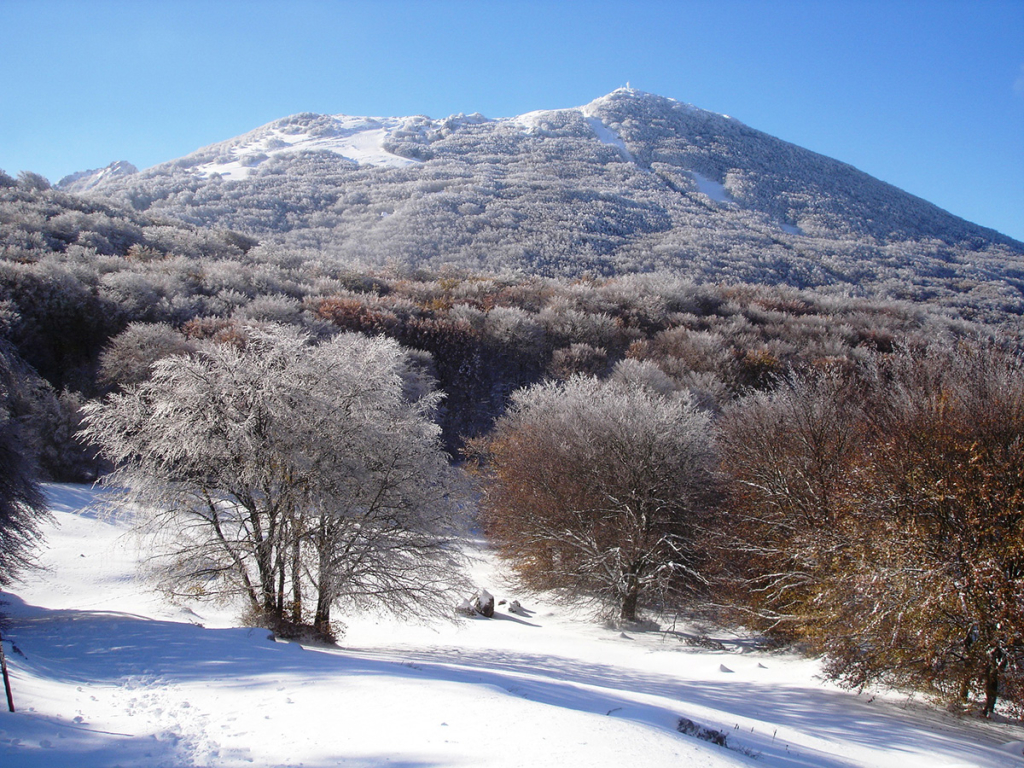 Do not go away without tasting the manna extracted from the ash of Castelbuono and Pollina; in these places, the Festival of the Manna, provolone and cheese, chestnuts, almonds, hazelnuts, products coming from wheat flour, beef and pig meat, salami and mushrooms is held in August. 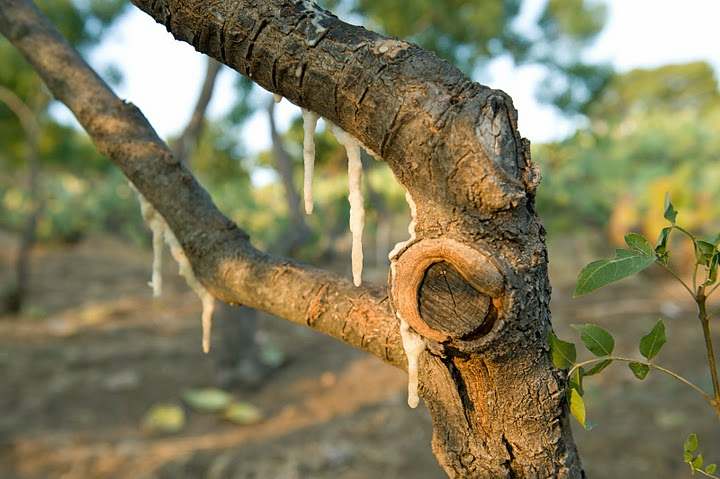 Let’s embark on a new journey in the Apennines towards the Sicilian Nebrodi Park: squeezed between the three provinces of Messina, Catania and Enna, it extends in a mountainous area of 200,000 hectares with the largest forests of Sicily.

There are also paths enriched by rivers, streams, mountain lakes, wildflower meadows in all seasons, and woods; it may happen to meet mammals, reptiles and amphibians, 150 species of birds, rare invertebrates, and especially the black Nebrodi pig, a typical dark pig bred directly in the woods in a state of semi-freedom.

Let’s start with one of the symbols of the Park, Lake Biviere di Cesarò in the province of Messina, with its 18 hectares and its crystal clear water: not being fascinated is impossible. 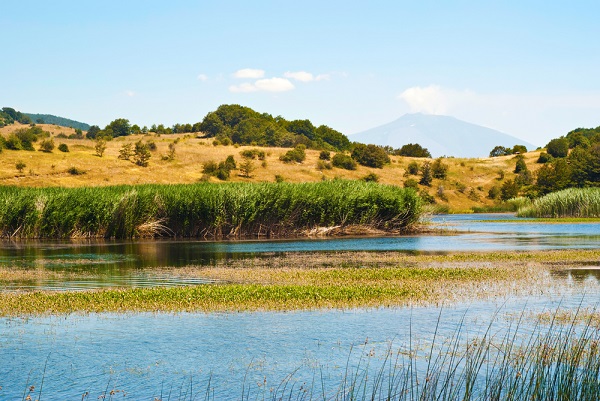 Surrounded by the beech forest of Monte Soro, the highest peak of the Nebrodi reveals the outline of Etna on one side and beautiful landscapes on the other side. We could meet herds of Sanfratello horses, typical horses from the Madonie, drinking the waters of the Biviere lake.

We could find the golden eagle and the great griffin on the steep slopes of the Rocche del Crasto at about 1,315 meters of height; Rocche del Castro is a rocky massif of limestone from the Mesozoic era, visible through open paths that wind through the municipalities of Alcara Li Fusi, Longi and San Marco d’Alunzio.

There are wide expanses with little trees, pastures, steep cliffs full of concavities, rocks that are perfect for climbing and not only: in San Marco d’ Alunzio there is evidence dating back to its founding by the Greeks, like the Temple of Hercules from the fourth century BC, the ruins of the Norman castle, churches with a baroque facade, medieval streets, and the Museo di Arte Bizantino-Normanna.

One of the great natural wonders of the Rocche is the cave Grotta del Lauro, situated at 1,068 meters of height in the territory of Alcara Li Fusi: there are countless stalactites, stalagmites, columns of various shapes in the first gigantic cave and then tunnels that lead to small and large cavities.

Another gem is the Cave of San Teodoro, at about 2 km from Acquedolci, that preserves a very rich group of records in terms of animals now extinct, and remains of the prehistoric man.

The beauty of the park is also in its sights: the scenic hills of Monte Soro, the coast of Sant’Agata Militello and Caronia Marina.

The Mangalaviti forest is extraordinarily beautiful and very suggestive and it is located near Alcara Li Fusi.

Let’s not miss the Catafurco Fall in the municipality of Galati Mamertino: it is one of the most suggestive in the area that originates at an altitude of about 30 meters along the river S. Basilio. The water  erosion in the limestone rocks is fantastic. At the base of the waterfall, there is a natural cavity dug in the rock forming a small and charming pond of water called Marmitta dei Giganti where, if the temperature allows it, you could  have a bath.

As we walk for kilometers surrounded by nature, we search for man’s products in the small towns in the park: embroidered tablecloths and sheets made ​​by hand, baskets, colored mats and carpets, and ceramics in Santo Stefano di Camastra. 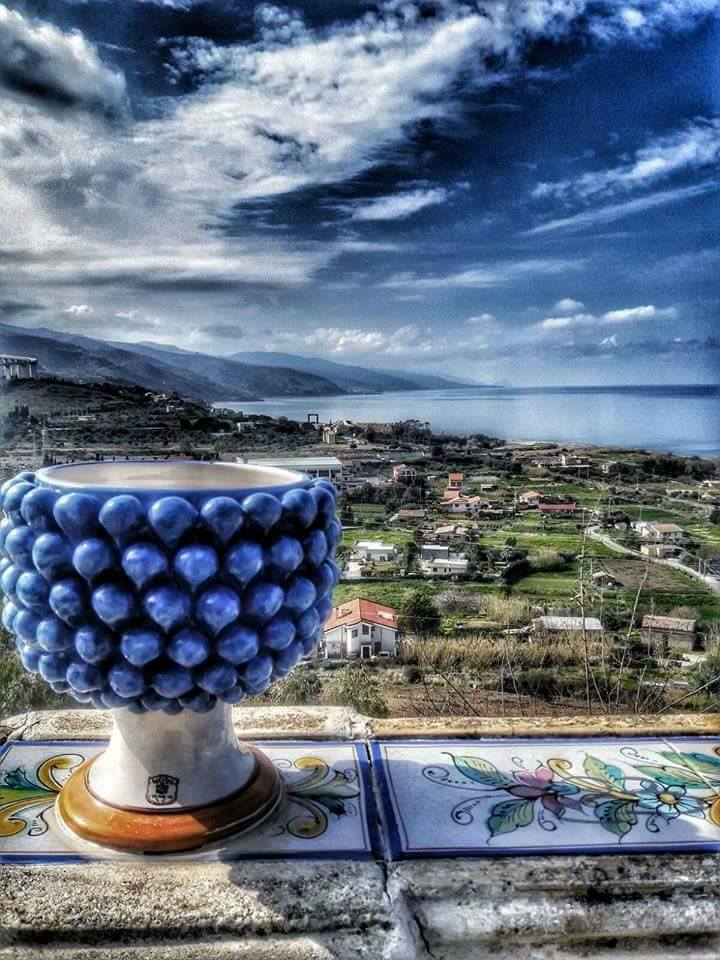 In Cesarò, you should definitely taste the cheese, provola, pecorino cheese, the delicate ricotta cheese produced with ancient methods, the salami of the black Nebrodi pig, the prized olive oil, honey, hazelnuts.