After a walk in the fresh air, through mountain paths, in the countryside or in one of the charming Sicilian villages, amidst the most beautiful in Italy, let’s have some little tastings to discover the true essence of Sicilian fall.

Among the most typical autumn products, having a unique flavour, are the prickly pears of San Cono, in Catania area. Even in Roccapalumba, near Palermo, and in Santa Margherita Belice, Agrigento, in October we find taste workshops, guided tastings, and sweets with the prickly pear, and a whole menu based on this tasty fruit. 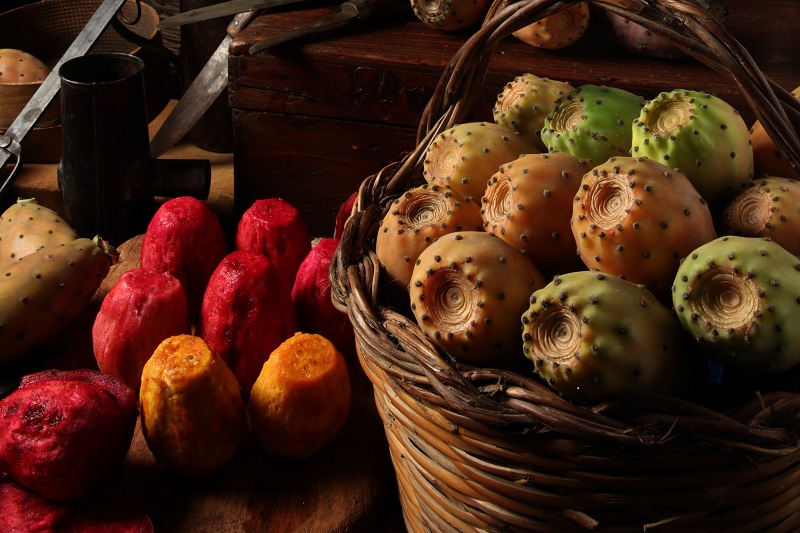 In the same period, in the small town of Zafferana on Etna, near Mount Etna  let’s have a weekend dedicated to apples, mushrooms, honey, and chestnuts .

The true star of autumn in Capizzi, in Messina area, is the Nebrodi truffle,  but in the area we can find many other typical products such as the Nebrodi porcini mushrooms, several kind of cheese like the provola in Capizzi and the buffalo mozzarella, or typical sweets such as’ u cavatieddu atturratu in Cerami and several black pork cold meats, everything coming from Nebrodi area.

Dont’ miss the fried guastedda  (fritter) and the “risu niru” (black rise) of Petralia Sottana (Palermo), into the heart of Madonie Mountains ! But also legume soups and fried thistles or the unmissable meat sauces and fresh pasta.

November, with the “Day of the Dead” celebrations, is the time of  Martorana fruit, fruit-shaped marzipan sweets .

And, of course, let’s taste the excellent Sicilian d.o.c. wine, or some of its famous fine liqueurs such as passito di Pantelleria, zibibbo, lemoncello, marsala, the citrus bitter liqueur (an excellent digestive) and delicious rosoli, that blend perfectly with the “Rame di Napoli“, the “Ossa di Morto” or the royal Sicilian Cassata!