June is perhaps the best month to get around Sicily either on a Vespa or by any other means. The sun is strong enough to tan your skin and the sea water has a pleasant temperature. Here in the south of Sicily, the sun is even stronger, there is a different light and the air is thicker. I do not think there are scientific theories that can explain it. Palermo is not that far away but it is so different here. I feel it every time I get close to these places, a feeling of warm peace, a gentle slow pace, envelops everything and everyone: Sicilians and foreigners.

Departing from Palermo, after a journey of about 4 hours and only once on the wrong road (shortly before arrival) we arrived with our tent at a small camp-site by the sea in Santa Maria del Focallo. The appointment with the guys from Ispica Vespa Club is in piazza di Ispica, a small town to discover.

Looking for the main square I enter by mistake into a nearby square with the Vespa. We look around and our jaws drop, we hear the tape which secures our helmets vibrate.

Santa Maria Maggiore seems like a mirage under the blazing sun. There is nobody around and it is 4pm in the afternoon. The powerful beauty of the Sicilian Baroque architecture amazes us. We cross through it, breathing it in, taking photographs of it. We enjoy it from all angles. The basilica overlooks a circular square bordered by a colonnade. I do not know whether it is a venue for theatre performances but you get the feeling that you are entering a proscenium and the silence seems to be waiting for someone to start acting.

After this unexpected stop, we begin to realise that we are going to learn about places of considerable grandeur. The thought gives me butterflies in my stomach. You can fall in love with places too, can’t you? 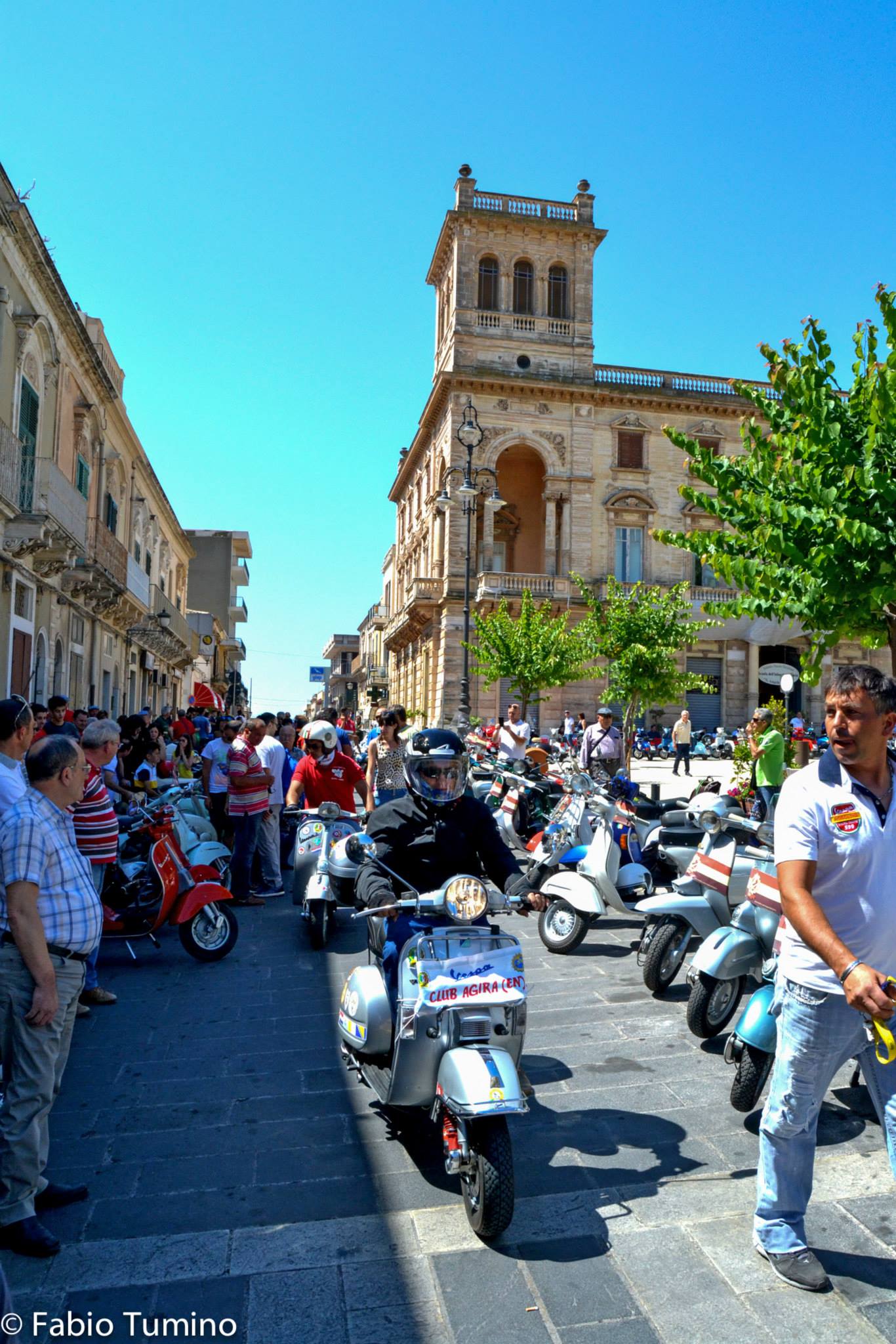 We arrive in piazza Unità d’Italia, where an already large group of Vespas and Lambrettas shine as a beacon of acceptance. We warmly greet the organisers and participants of the preview tour (the real gathering will start tomorrow) and we leave together towards Scicli to get a taste of the first afternoon of baroque architecture. 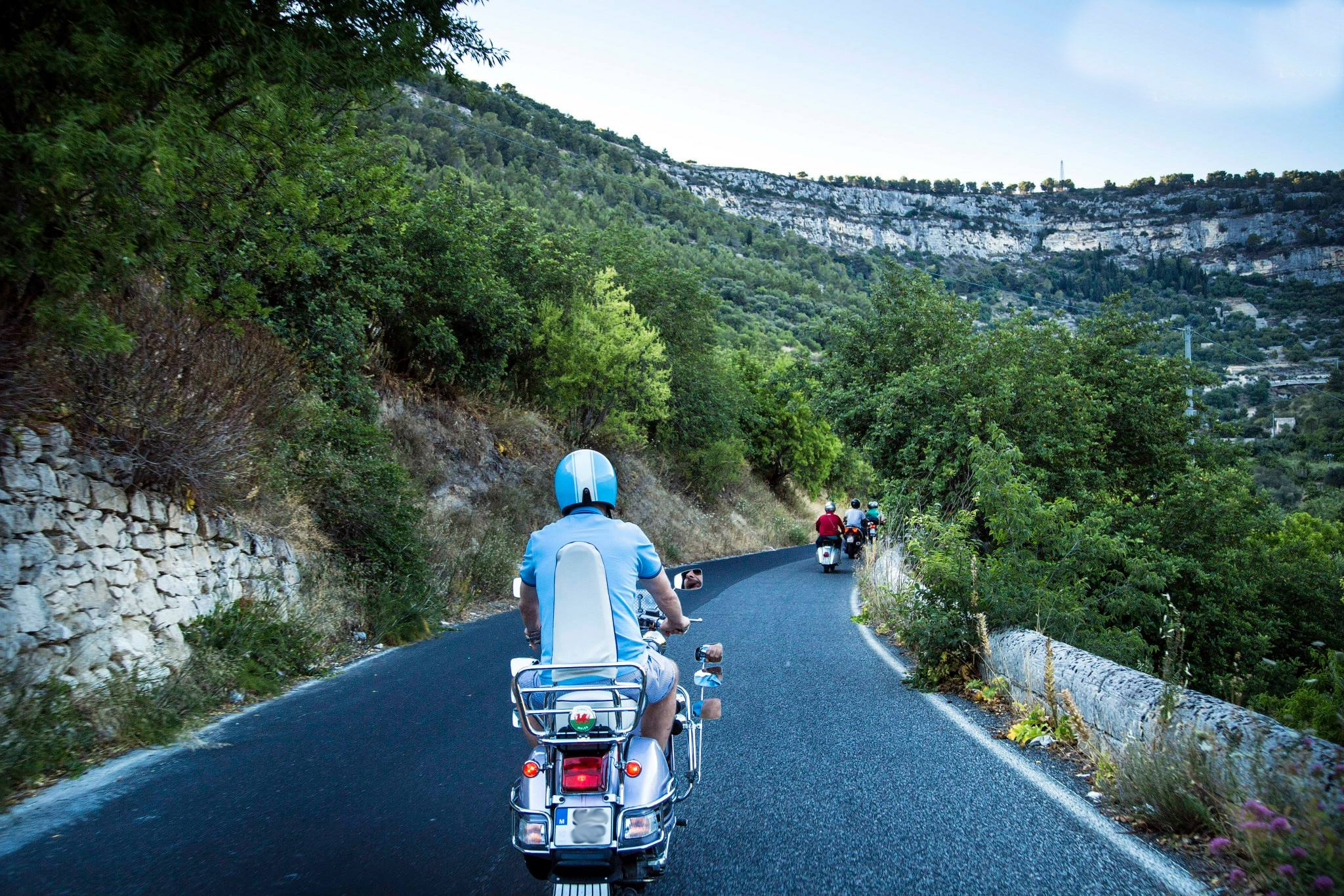 Our tireless friends have researched this year a tour dedicated to scents: We will travel through places that must be felt with our five senses. 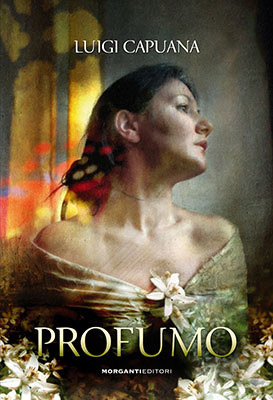 The reference is to the novel Profumo (Perfume) by Luigi Capuana written in the late 1800’s and set in these places. The guys have chosen to travel through narrow streets that twist and turn winding their way through fields enclosed by dry stone walls. It is surprisingly full of dry stone walls everywhere, due to an ancient need to demarcate fields derived from the splitting of a huge sixteenth century feud. You can smell the scent of the flowers, the tall grass in the sun and manure. Travelling by scooter is beautiful, you go along slow savouring everything you come across. Slow travel anyone? Why not

We arrive in Scicli from up above, coming down along the gorge. This city has provided many sets for the famous Inspector Montalbano series and has received some media attention in exchange. But looking at these places the thought of the beautiful fiction, despite residents’ attachment to the character of Camilleri, doesn’t seem as important to me in comparison with close contact with these wonders. It’s as if we should remember Paris and Montparnasse square only for Commissioner Maigret. 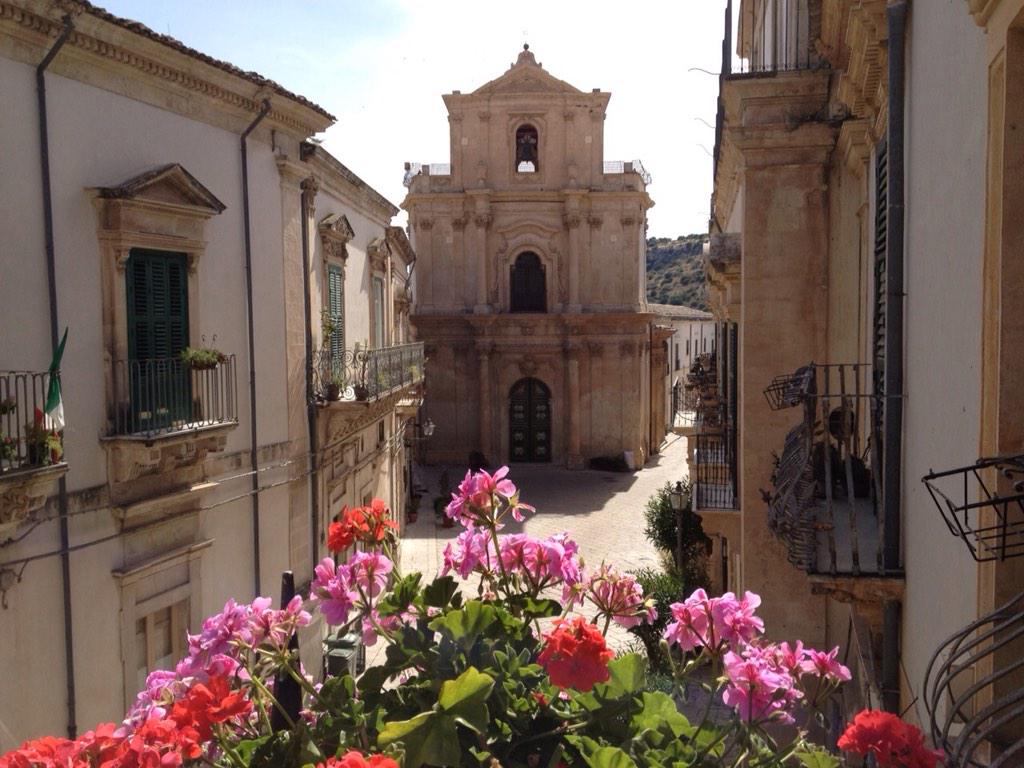 We find Vincenzo and Valentina waiting for us. They tell us about the project Scicli Ospitalità Diffusa (Scicli Widespread Hospitality), a group of young businessmen and friends offering Scicli and surroundings on an all inclusive basis: the b&b with food and a guided tour. Valentina describes everything passionately pointing out to us the outdoor cafés where they make breakfast for the guests of the bed and breakfast. This widespread hospitality helps you to live as the people in the town do. You are made to feel at home and are completely pampered. Greeting those who pass by, while you’re sitting in a café, perhaps while enjoying a breakfast of almond or mulberry granita with brioche. In the words of Elio Vittorini, the writer of the Città del mondo (Cities of the world), people living in the most beautiful cities are happier and cheerful with others. Is that true?

Vincenzo accompanies us through the streets telling is about the history, the places and people of Scicli. Churches, palaces, balconies, alleys and streets in bloom. What better way to learn quickly about a place than accompanied by a friend from there? 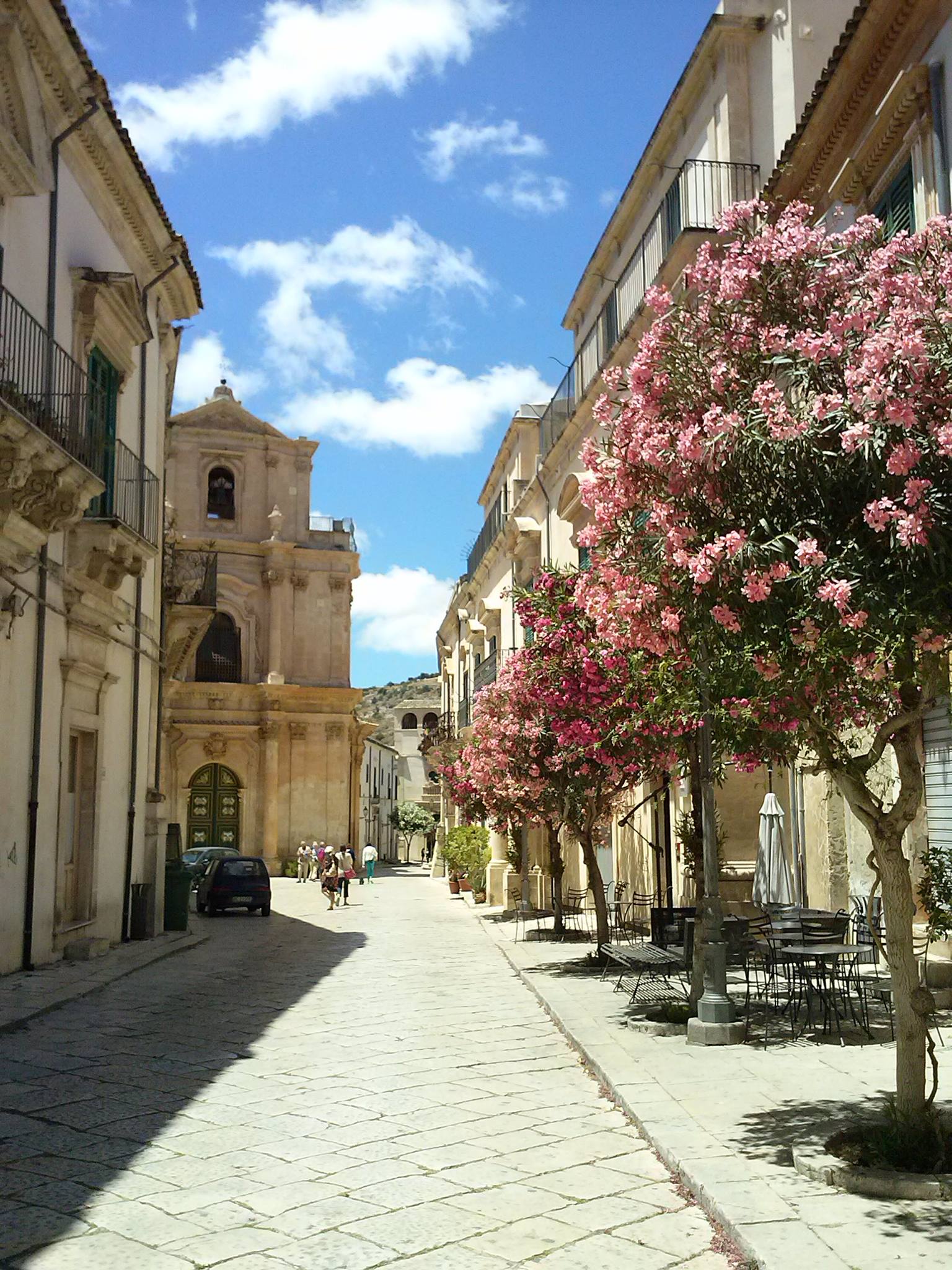 The afternoon is warm and there is still so much light. After the tour of the most beautiful sites, we thank Vincenzo who gives us his invaluable notes for a thorough visit of the city and we say goodbye.

The wheels of the Vespa want to turn…

The trip continues towards Modica (Muorica). Needless to say, what is the first stop: the chocolate factory!!! 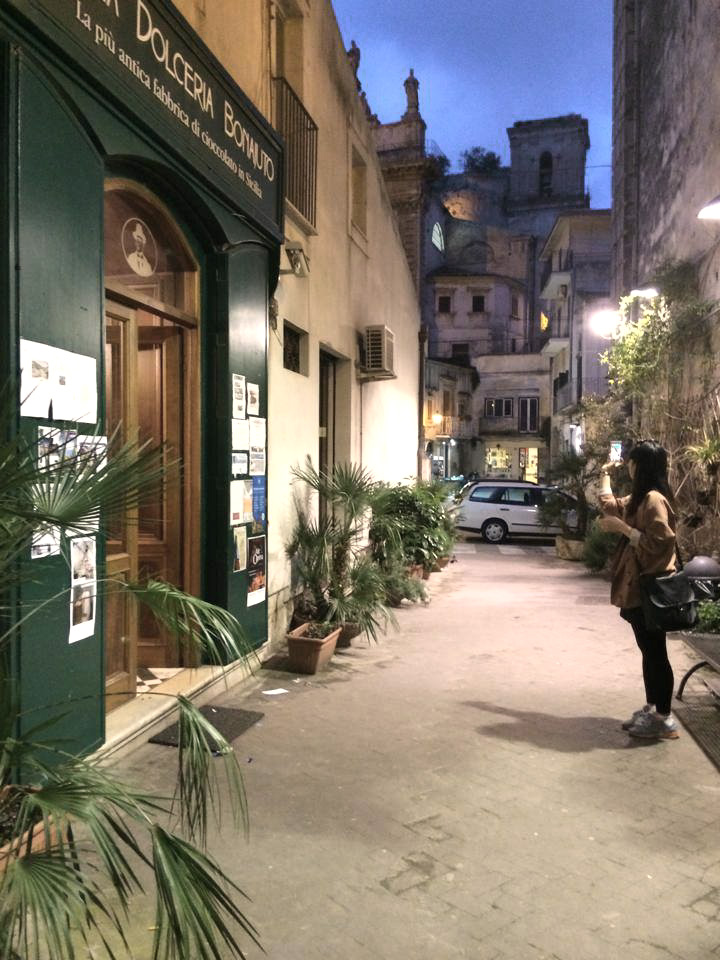 The old chocolate factory Bonajuto has made famous in the world the cult of Aztec chocolate imported by the Spanish conquistadors in Latin America directly to Sicily. The tasters offered while you queue up to buy will be very difficult to forget. This company has the merit of perhaps making the greatest contribution to the spreading of the Modica brand of chocolate in the world. However, the city is full of chocolate shops where you can taste excellent products. Modica is the Sicilian capital of chocolate and every year this manifests itself in Chocobarocco a festival of gastronomy and art that takes place in late autumn.

The widespread hospitality has also developed in Modica and is a great help in getting to know the city. The amazing cathedral with its 250 steps, the view from the lookout and then everyone on the bikes to return to Ispica (Spaccafurnu). On the way back gentle twilight accompanies us, the air becomes more humid and it enhances the smells of the landscape. Giuseppe, our captain, again has not left the choice of route to chance and the smells become more intense and captivating. 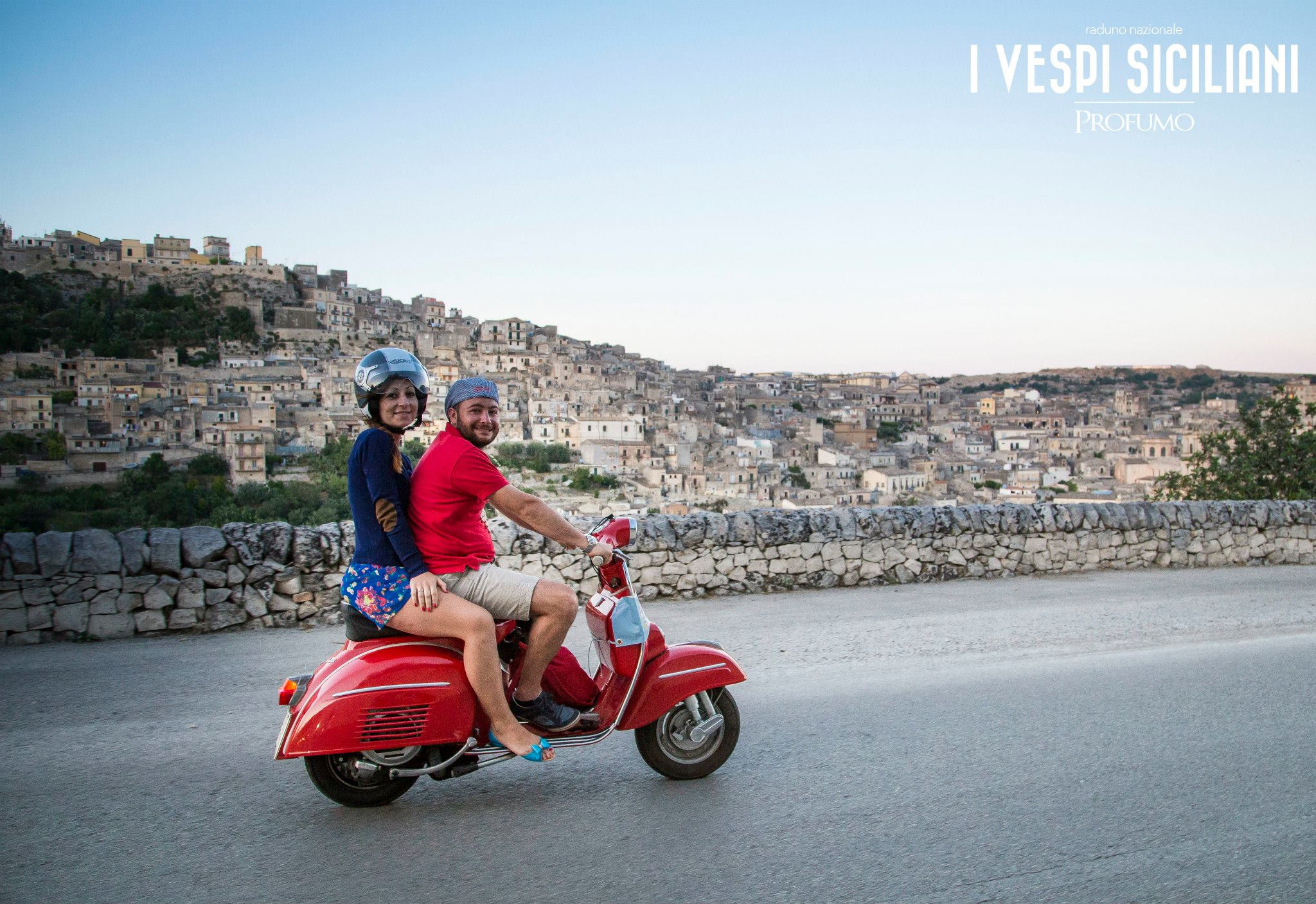 At the camp-site, the night is cool and passes pleasantly but a slight leak in the inflatable mattress means we wake up a little achy.

At 9am everyone is in the square for the briefing, breakfast and departure. When I realise how many we are and how many Vespas are parked in the square I understand the reason for the title of our adventure: The Sicilian Vespas. A funny play on words with vespers, the popular revolution that in 1282 dramatically changed Palermo. Although this does seem like a revolution! Although the people of Ispica now seem accustomed to this annual chaos and do not fall apart as much. Instead, they examine the colourful and shiny scooters in an amused way. 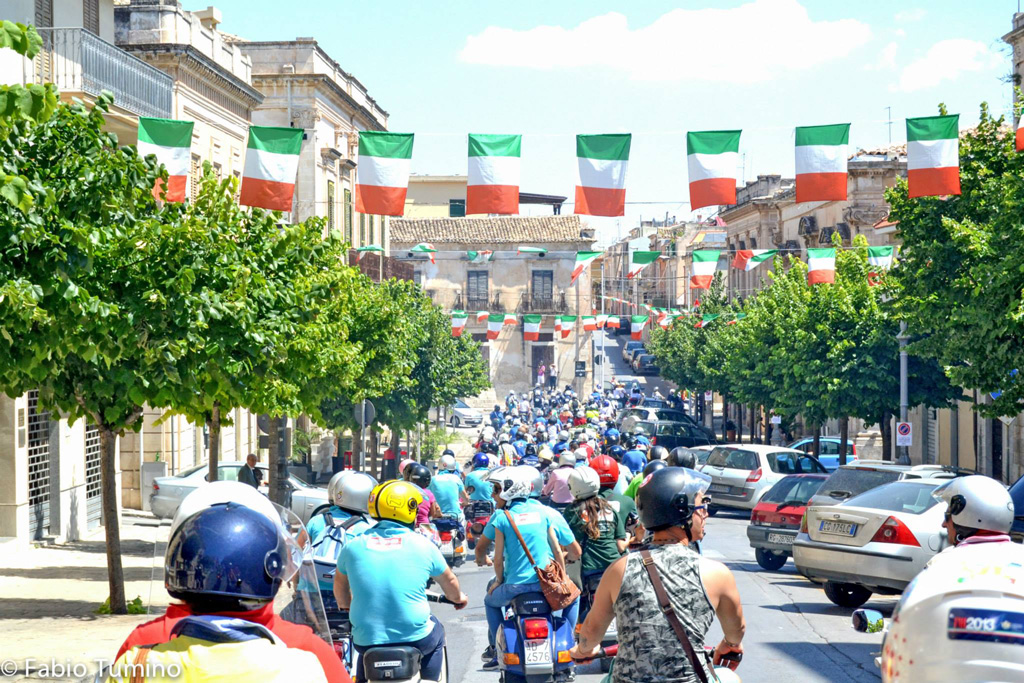 In this atmosphere of bygone days, we witness the realistic depiction of a medieval duel, staged by the group Milites Trinacriae. A forbidden glance at a married woman leads to the duel between a commoner and a soldier. Weapons glisten in the hot sun, but the two duellers, heavily decked out, fight regardless of their fatigue. Really good. Meanwhile, as we return to the Vespas, someone quietly tells me that UNESCO has even expressed interest in this place. 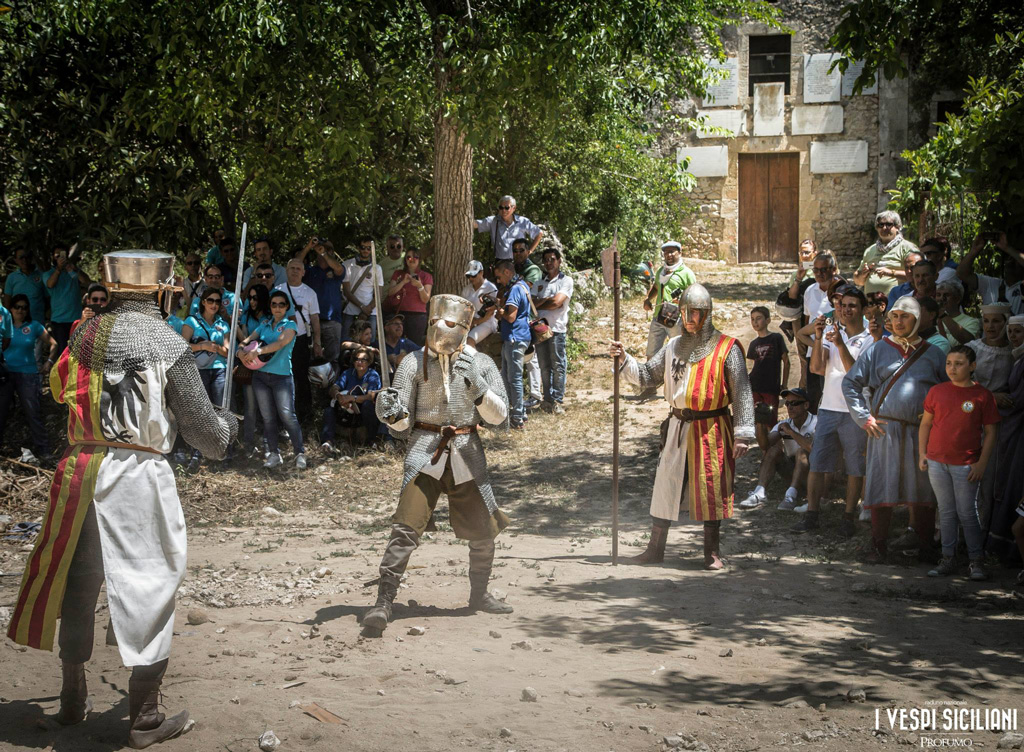 The adventure resumes in the direction of Noto, capital of Sicilian Baroque. We invade the streets being looked after by trusted couriers that guarantee our crossing at every large crossroads. They block the traffic before disappearing quickly and materialising when next required like unflappable guards.

Once we arrive in the city, we do not go unnoticed. Instead, in an orderly fashion, we occupy the entire car park in front of the theatre and we start walking along the elegant main street. 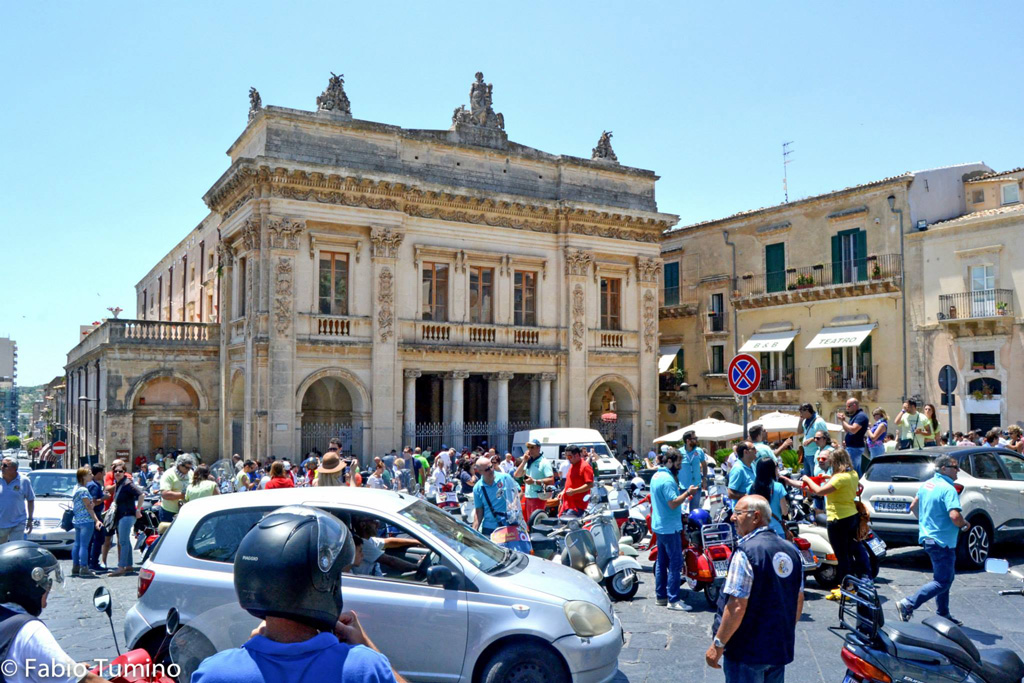 We reach the villa through a long avenue of citrus trees. In front of the majestic façade, four figures, also in eighteenth century costume, greet us. 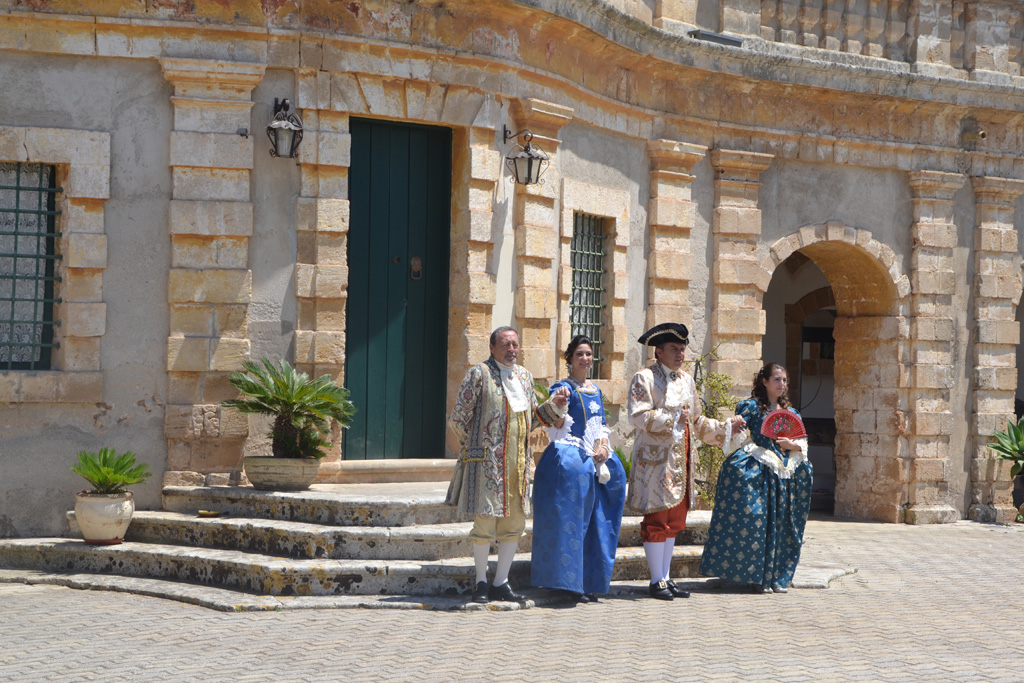 They welcome us and take us into a large room where they will have lunch with us. They explain that the villa, considered the most beautiful of the Ragusa area, was the summer residence of the Nicolaci princes and that over time it hosted the greatest figures visiting these sites. The lunch is actually a banquet and goes on until the afternoon.

The wheels start running again and we head back to the campsite in Santa Maria di Focallo. 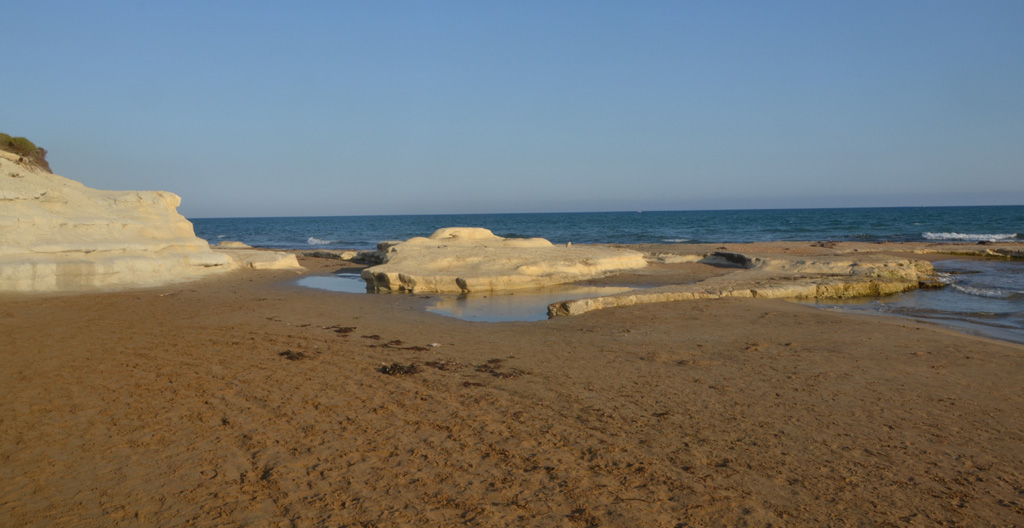 After a short break for a digestive walk by the sea among some rocks of marl (tuff stone located at the Scala dei Turchi) and, after watching the guys who do kite-surfing, we dive into the Mediterranean as well. 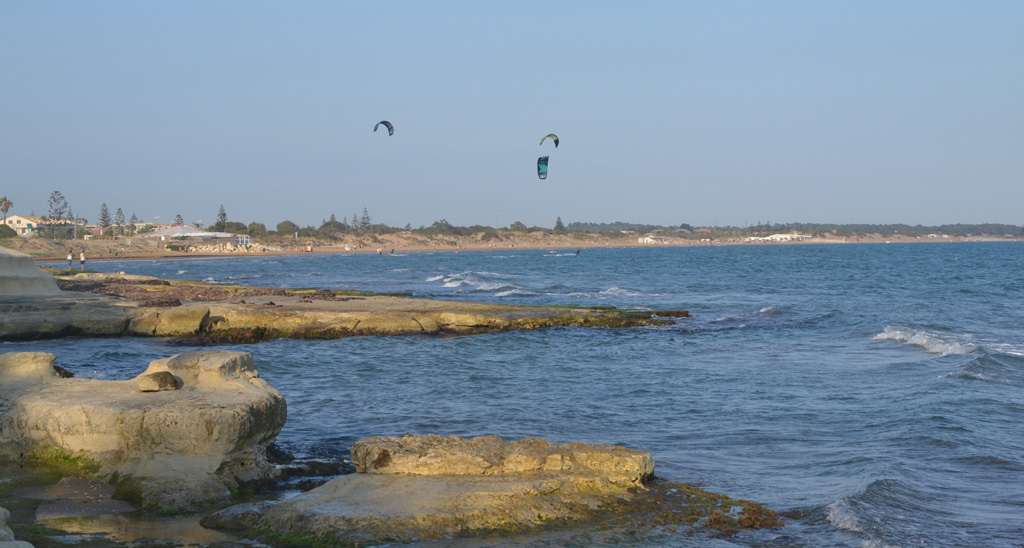 Readings from Perfume by Luigi Capuana

It is evening, the next event is to go to the district of Ispica of the Carmine known as u cuozzu. It is an ancient settlement around the convent of the Carmine. The writer Luigi Capuana stayed here for a short period for business related to his position as mayor of Mineo and set some of his stories in Ispica, describing precisely the places and traditions that are interwoven with the stories of his characters. There, he set both the story “Perfume”, where Ispica is represented as the Sicilian town of Marzallo and the novel of the Marquis of Roccaverdina, situated in rural and feudal Spaccaforno. 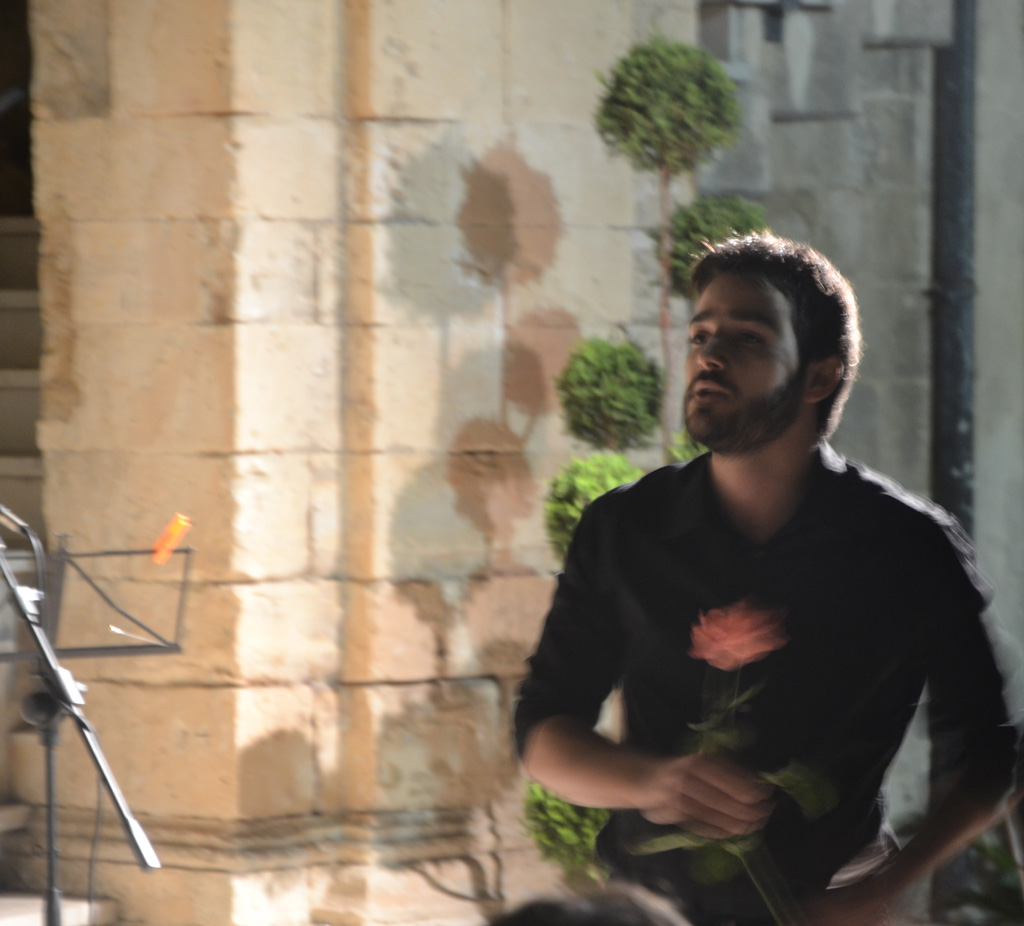 There is a reading in the cloister of the convent and a tasting session of local products. Also, on this occasion, the guys of the organisation along with a young local cultural association, demonstrate their good taste, reconciling the sacredness of the place, the reading and tasting of delicate products offered carefully around with a small route of scents arranged with local aromatic plants. Bravo! Our evening ends with a guided night tour of the district of the Carmine of Ispica through the scenic gardens of houses that individuals have kindly opened up for us. The next day, before leaving, we treat ourselves to the last lap and we leave the campsite and head towards the Pantani di Pachino (Marshes of Pachino). Migratory birds, that travel to or from Africa in the autumn or spring, find shelter in this marshy environment. 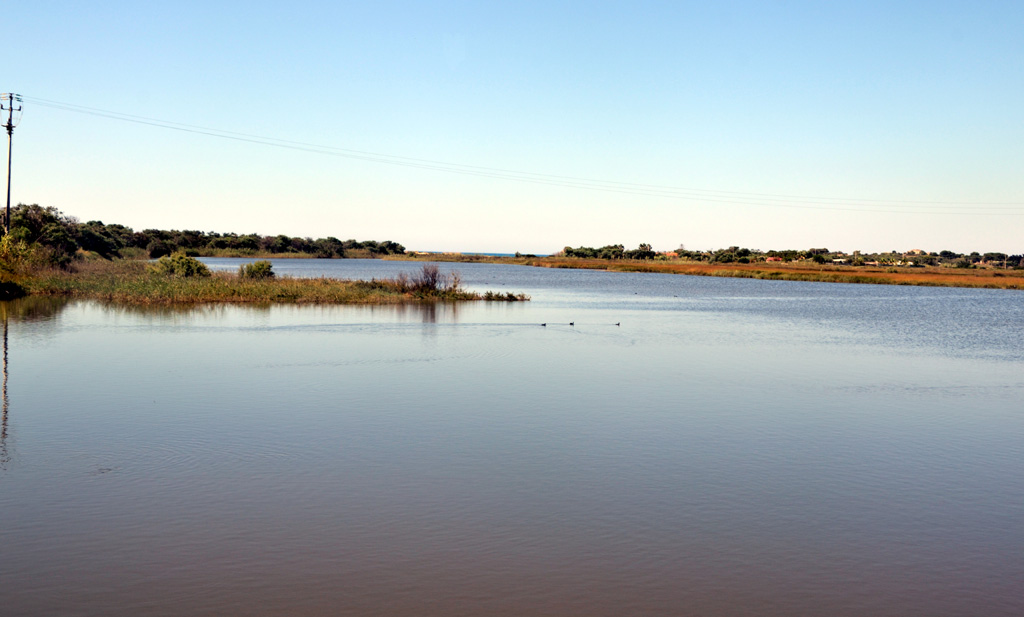 We reach the marshes by crossing a road between the greenhouses where the tomatoes of Pachino are produced. 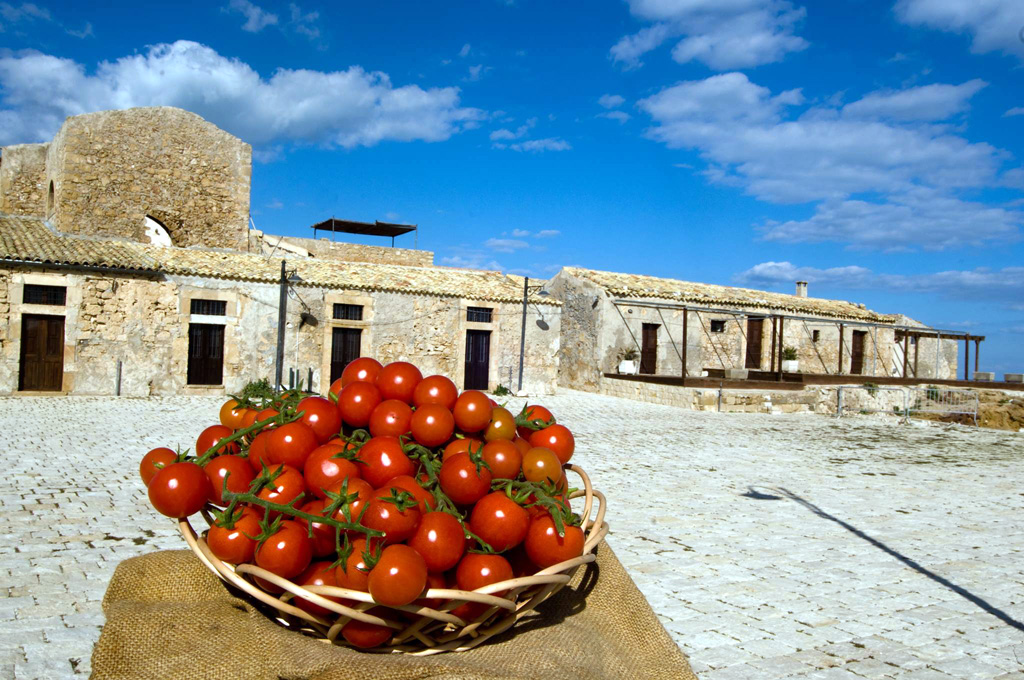 Going along these narrow country roads, which are sunny and white from the dust, we proceed slowly occasionally passing a lorry carrying tomatoes. The sun is strong and the dust dries the air, but it’s a fascinating place, where everything seems to live with double the effort. We are in the deep south and it makes me think of the opposite borders of our Italy. Even on mountain paths or in small villages at high altitude life flows with equal difficulty. This air brings us towards what we were and what we have lost being, a path of memories that we don’t recall and which everyone should cross at least once.