The feast of Santa Rosalia

The feast of Santa Rosalia

There are customs and traditions that are timeless. There are traditions that involve tourists and take them to a different world, full of charm and beauty, between devotion and theater. The feast of Santa Rosalia is probably a famous example of such traditions – in Palermo, it is called ‘u fistinu. It takes place in the most beautiful places of Palermo in mid-July.

This feast surprised even the great travelers who visited the city in the eighteenth and nineteenth centuries. Santa Rosalia, particularly dear to the people of Palermo for her role in fighting the plague in 1624, is the absolute protagonist of this great event. 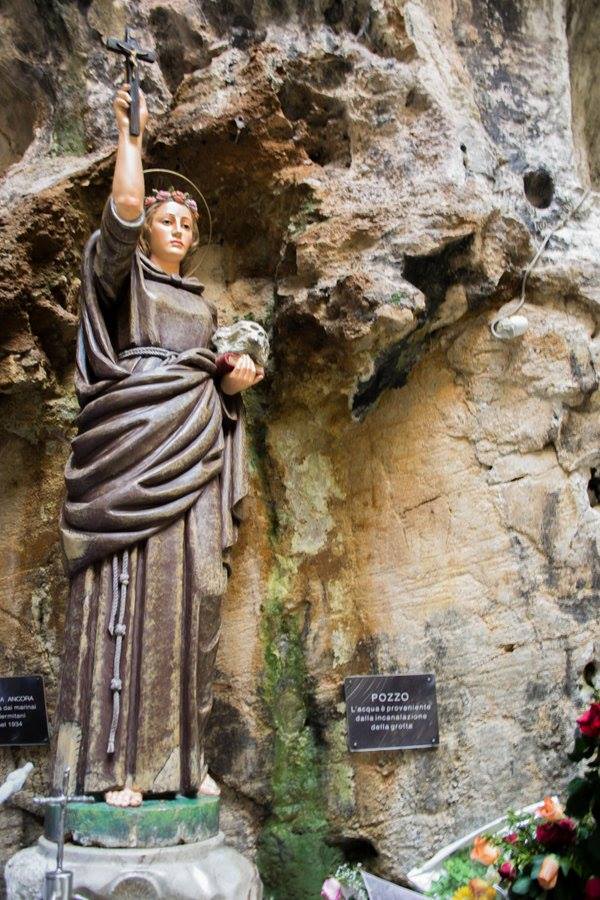 Watching the people in procession is definitely a unique experience on the night of July 14th: the procession starts at the Cathedral and reaches the Foro Italico through Cassaro; it follows a path full of references to pain that culminates in the joyful celebration of life, with a big show of fireworks. The Archbishop and the Mayor of Palermo are the head of the procession; they drive the people who energetically celebrate the Saint and keep joining a more and more impressive parade. 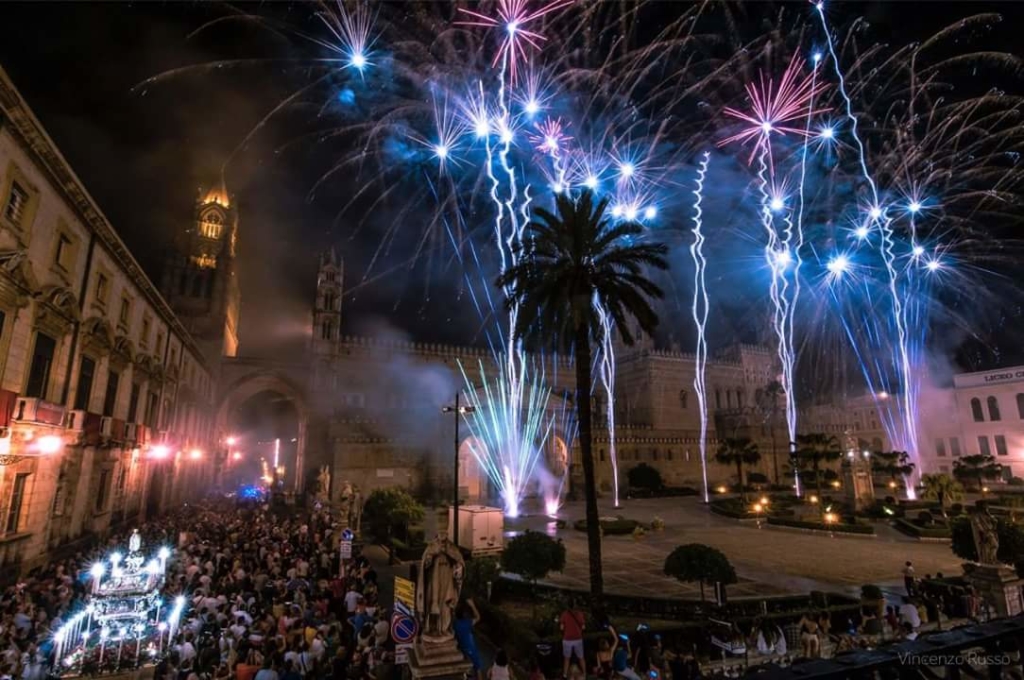 The center of the procession is the magnificent vessel-shaped chariot, which is built different every year and it carries the Statue of Saint Rosalia. It is a true itinerant stage, ten meters high and almost as long, pulled by oxen (in the seventeenth century they were apparently pulled by elephants!) and richly decorated with roses, angels, cherubs, newts, that merge from gold and baroque colors. All around the, the people keep dancing, creating amazing choreographies with lighting effects, while praising Viva Palermo and Santa Rosalia! 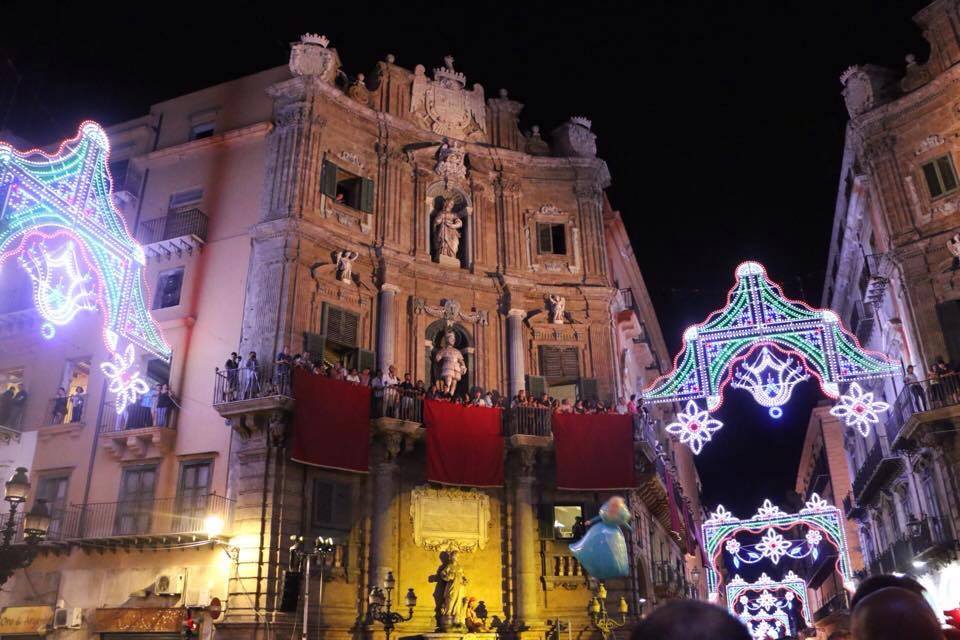 On July 15th, the relics of the Saint are carried around in a silver urn and Masses are celebrated in her honor; finally the urn returns to the Cathedral to be blessed by the Archbishop of Palermo. Rosalia Sinibaldi lived a short life in the twelth century. She was a heremit (she went from Santo Stefano di Quisquina to Monte Pellegrino) mostly to escape the will of her noble family that forced her to a marriage for convenience. According to the legend, four centuries after her death, Saint Rosalia appeared to a hunter during the great plague of Palermo in order to make honor to her remains that laid abandoned in a cave. Miraculously such relics, passing through the streets of the infested Palermo, healed the people from the disease who followed in procession.
Even today the songs praise the Santuzza:
Notti e ghiornu farìa sta via!
Viva Santa Rusulia!
Ogni passu ed ogni via!
Viva Santa Rusulia!
Ca nni scanza di morti ria!
Viva Santa Rusulia!
Ca nn’assisti a l’agunia!
Viva Santa Rusulia!
Virginedda gluriusa e pia
Viva Santa Rusulia!

For those who want to discover the true Sicily, with an extraordinary set of faith, joy, sacred representations, and celebrations of the victory of life over death and of collective identity, u fistinu is a must. 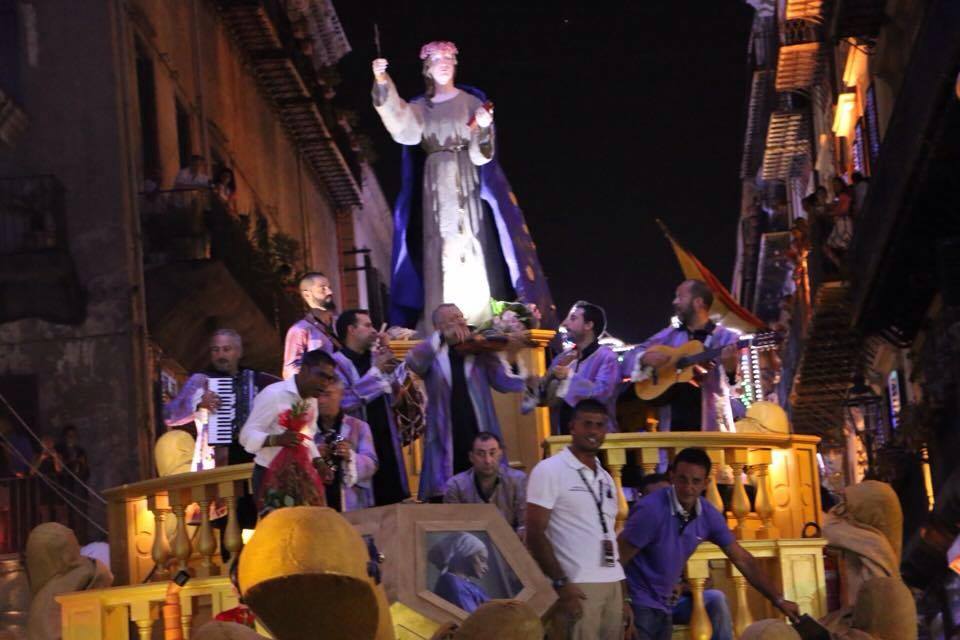