Sperlinga (Enna) is one of the most beautiful villages in Italy: entering into the heartland of Sicily is not a mystical or figurative operation.

In this village in the middle of Sicily in fact, we enter spaces and rooms dug into the sandstone. Not surprisingly, the name Sperlinga derives from the Latin “spelunca” (grotto, cave), rather surprising is the castle dating back to the year 1000 that rises and penetrates into the rock, shaping it. The artifice of human ingenuity you soon imagine overcoming what remains of a drawbridge, large rooms recount in a whisper the painstaking work of the Siculi. 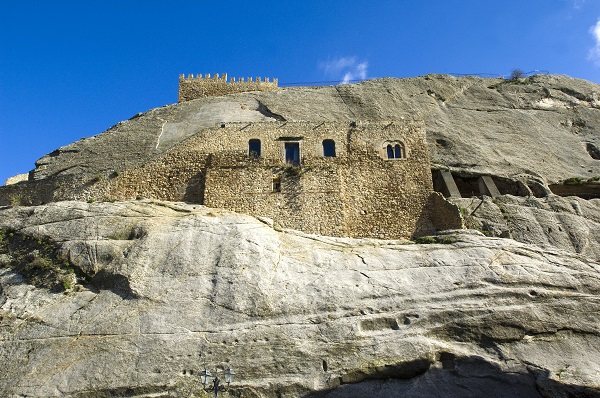 Advancing quietly, you start to hear the warp and the natural rock changes, now in the workshop for metals, now in prison, now in a large stable or in a water tank. An intimate and protected space, so united with the surrounding environment as to become impossible to conquer, as evidenced by the damming of a French garrison at the time of the Sicilian Vespers and the resistance which was, all things considered, easy for a whole year. Advancing beyond the service areas, we are faced with a mysterious environment which preserves in its walls twelve small niches spaced apart with increasing gaps. For some it would be what remains of a place of worship, for others the testimony of an ancient and unknown system of measurement of time and seasons.

At this point you can only go up and in the ascent tread up the steep stairs, almost like wounds in the hard rock, to see the sky and, through the ancient battlements, enjoy the view from the castle tower. In a place called Sperlinga you cannot miss the caves, or rather, in this case the “aggrottato”, which consists of a large complex of rooms carved out by man over the whole side of the castle dominating the village.

The charming village carved in the wall, has 50 caves accessible by stairs and connected by small streets formed themselves into the rock. Each one of the caves was used as a small house, with one or two rooms at most and some of them today have been bought by the Municipality and turned into an ethnographical museum.

In fact, the whole area around Sperlinga is dotted with caves dug into the sandstone in an intricate system of artificial caverns, among which are the sites of Contrada Rossa and Peirito, likely places of worship and burial of the early Christians.

At the foot of the castle is the Church of Mercy, the first church of the village, famous for a beautiful wooden crucifix from the old church of the fortress. In order of size, there is the Mother Church, a building with a single nave commissioned by prince Giovanni Natoli in the 1600’s. The third church of the village is that of S. Anna from the second half of the 1600’s, attached to the convent of the Augustinians in which a wooden crucifix from the school of Friar Umile of Petralia is displayed.

The more authentically traditional dish of Sperlinga is the frascatela, a polenta of durum wheat or grass pea flour, with lard and broccoli. However, the tortone could also be mentioned. It is a cake made with bread dough, fried in oil and sprinkled with sugar mixed with cinnamon.