In his Voyage en Sicile, published in 1788, Dominique Venon, Baron Denon, gathered the Teatro Greco di Siracusa in the restricted list of the most beautiful scenery in the whole world.

Included in the archeologycal park of Neapolis and tailored into the rocky hill of Temenite, it was renewed in the III century AC and it is one of the most important note and evidence of the metropolis who rivalled Athens

TIt has three important elements: the stone cavea (auditorium), semicircular, the orchestra and the stage, presenting grooves and digs probably practical during the circus events in the  roman era.

Worldwide Cultural emblem, it guested over the centuries, and till now, thanks to the Fondazione INDA, the alluring classical representations. 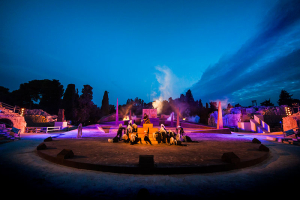 Classical representations at the Greek Theatre of Siracusa

Every year in summer, at sunset, the stage recall of the paraboles decribed into the tragedy plays and the greek commedies to live again  breathtaking scenery in the magic of a stone theatre.