The Sicilian hinterland, the real kernel of the island, is little known. Here, you can easily get in touch with people in a natural and spontaneous way. Old cultural expressions and millennial traditions, thousands of archaeological, architectural and natural treasures, are awaiting us.

Let’s begin our journey starting from the south–western slopes of Mount Etna, in the territory of Adrano: in the Forre laviche del Simeto, a Nature Reserve full of lava caves, waterfalls, rapids and small lakes, placed among the basaltic slopes of an ancient lava flow, we find the ancient Saracen Bridge, rebuilt many times over the centuries .

We continue toward Centuripe, where we visit the Archaeological Museum with its important architectural, ceramic and statuary remains, dating back to the Roman period. In the historic centre, the Immaculate Conception Cathedral of the seventeenth century. Let’s stop to the next bar to taste the typical local cake: the Bersagliere! 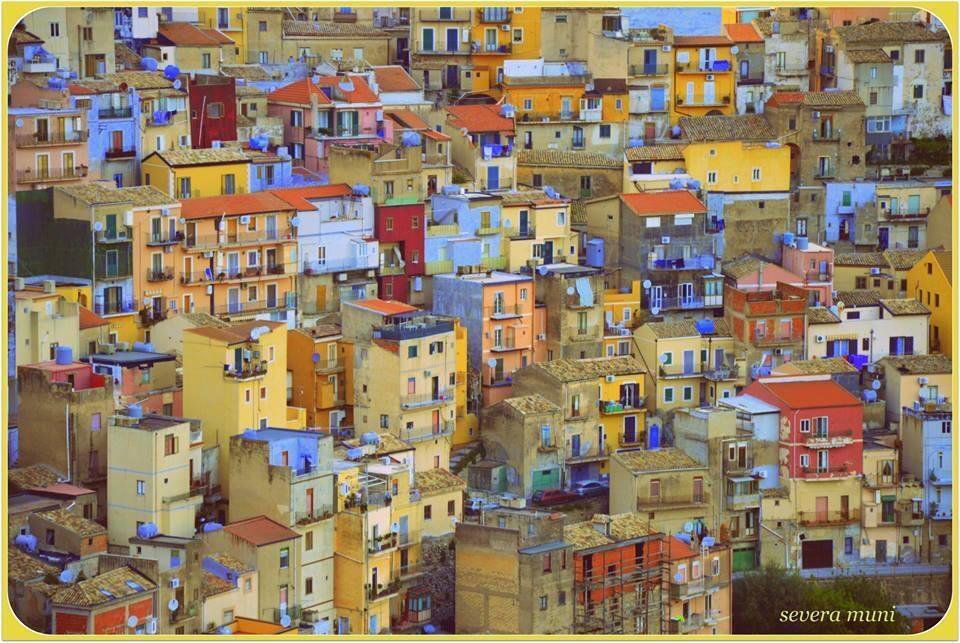 From Centuripe we reach Regalbuto following the signs to Pozzillo Lake, where we can relax for a while; at a short distance, Pozzillo Adventure Park, perfect also for children. 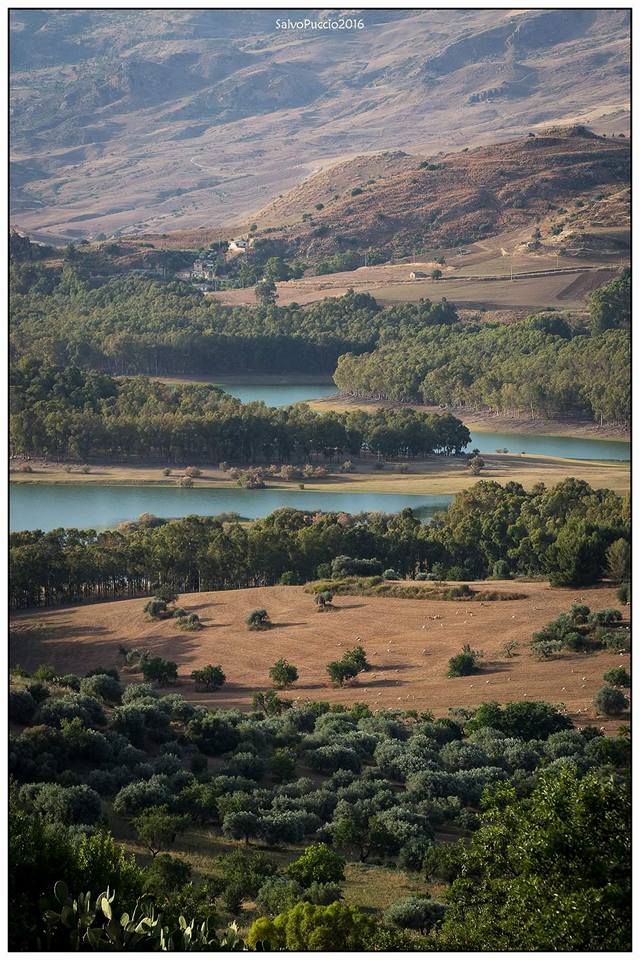 Let’s continue our trip toward Assoro and let’s visit its beautifully decorated Mother Church, consecrated to San Leone, and the Church of Santa Maria degli Angeli with its annexed Convent. Before leaving, let’s taste the typical sfinci (bread pancakes) and the almond cakes.

Let’s continue toward Calascibetta, where we visit the wonderful Cathedral of Norman origin. In the area named Malpasso, we visit the Realmese Necropolis and the Canalotto area, a late-antique, rocky village. We continue toward Villarosa where we find a unique Museum set up inside the disused railway wagons: the Train Museum of Villarosa and Museum of Memory displays items of peasant and miners life.

Now we go to Enna, the highest regional capital in Italy. 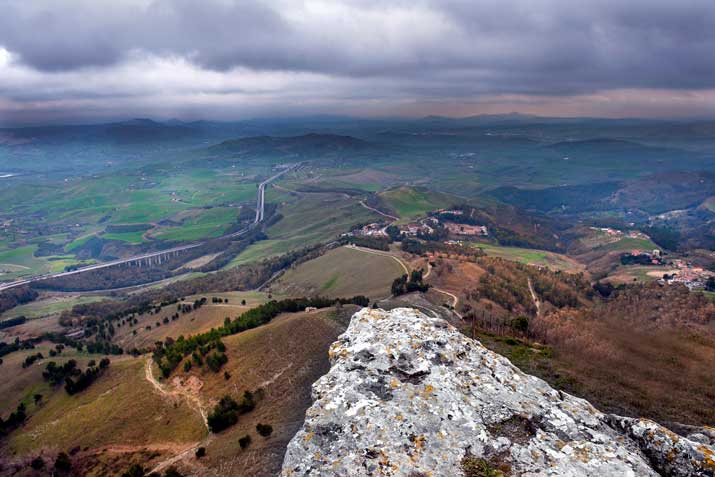 From its Lombardia Castle, we enjoy an amazing view of Sicily. We can’t miss a stop at the Duomo and a walk to the Marconi Viewpoint, the terrace on the inside of Sicily

As a necessary step, we taste the Naples biscuits and the Piacentino cheese with its characteristic saffron yellow colour and with black peppercorns. 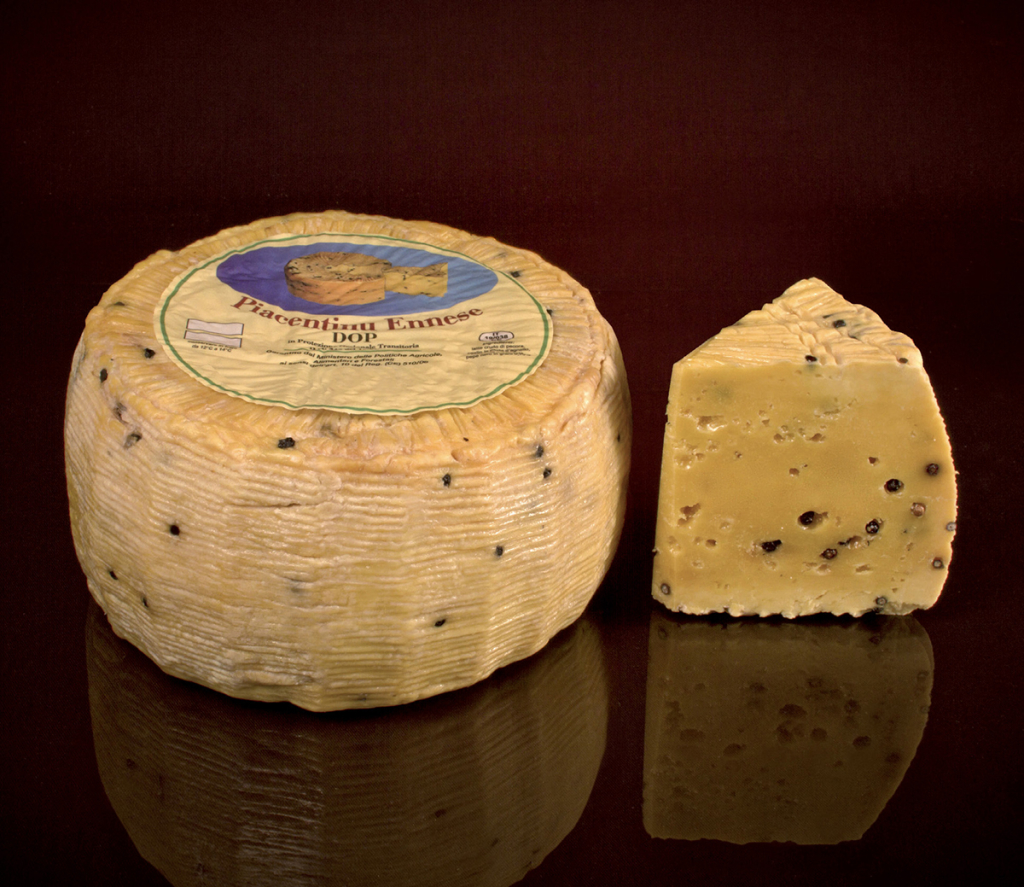 About 6 miles from Enna we find the tiny Borgo Cascino. It is one of the many agricultural villages built during the fascism. It could seem we are in the Tuscan hills, while that’s the heart of Sicily. In the village, still inhabited by a few families, you perceive an intense country atmosphere. A large square, a small church and a civic tower and, needless to say, plenty of genuine food.

The photo shoot of this wonderful village is a must. 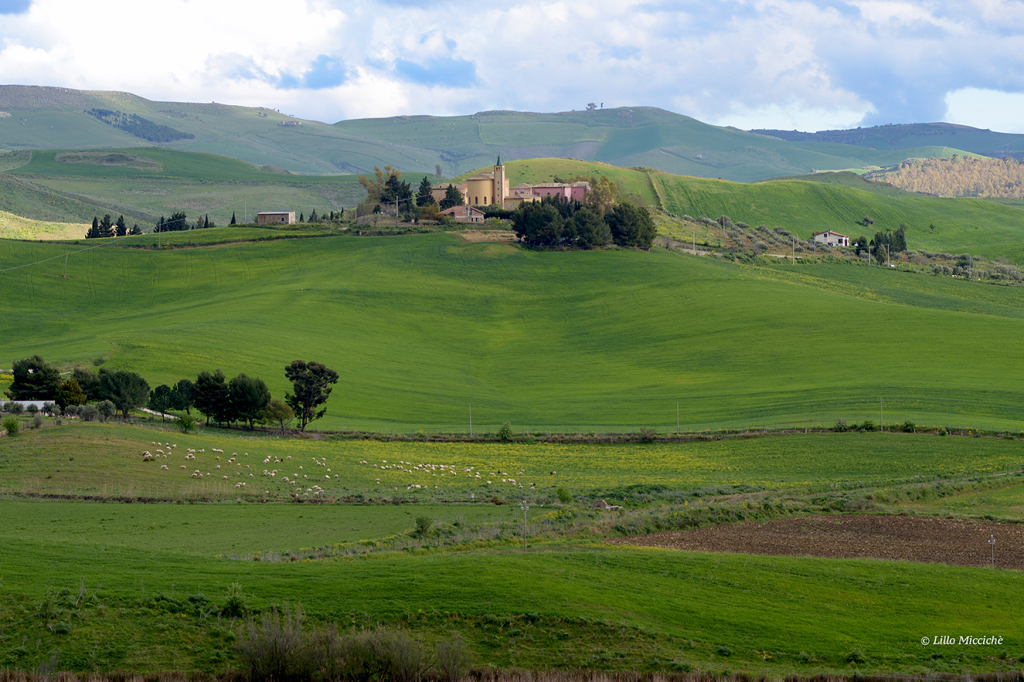 In the old town we visit the Renaissance and Baroque monuments commissioned by the Moncada family: the Cathedral, the churches of St. Dominic and St. Agatha by the College, and Palazzo Moncada.  Before leaving, you must taste the typical local nougat! 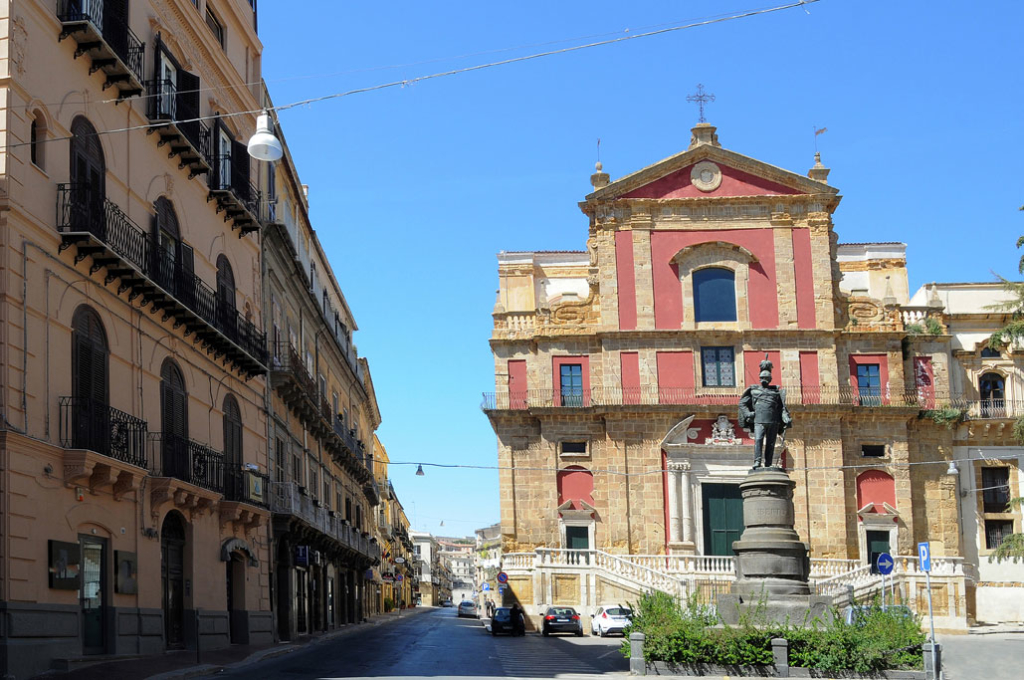 Let’s visit the old mine nearby Sommatino, the Museum Trabia Tallarita: a spectacular virtual “discenderia” (mining tunnel with a strong inclination) will transport us into the earth meanderings. Not far, the Village of Santa Rita is a group of houses nestling in the Agrigento countryside. One of the many places potentially condemned to be abandoned. In this place an ancient bakery survives, contrary to any logical assumption, deciding in 1999 to recover the traditional bread-making techniques, choosing stone-milling, studying ancient flours and yeasts derived from Sicilian ancient grains,  and using only  wood oven to produce ancient bread, of the type that lasts a week. It’s worth a visit to enjoy this delicious creations baked in the traditional methods and with natural products and to enjoy the quiet of the village life. Here you can also visit the new Micro Intangible Museum of Wheat and Bread. 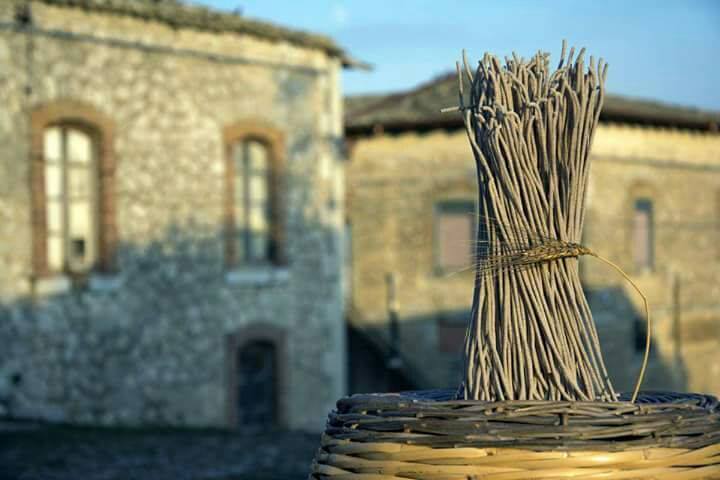 And now let’s go to the big Montedoro Astronomical Observatory through the vast expanse of catarratto and Canicatti Nero d’ Avola vineyards; the Aquilae Grillo has won an award as Best World White Wine in 2016. Let’s then relax in nearby Serradifalco and have fun at Adventure Park Antiche Zolfare. Before entering the park, let’s take a break to observe the migratory birds of the Lago Soprano Nature Reserve.

Now let’s plunge into a moonscape, a bare landscape full of badlands belonging to the Vallone (a deep depression of the mountain with a narrow grooveterritories), that make our journey difficult and, at the same time, fascinating.

Let’s move to Mussomeli, a medieval village, and let’s visit the Archaeological Museum of Palazzo Sgadari which displays artifacts mainly found in Polizzello site. A few kilometers further, the majestic Chiaramonte Castle, will seduce us. Built on a rock, the Castle, one of the most beautiful in Sicily, is a fortress dating back to the fourteenth-century, with different halls, tunnels, reservoirs, prisons, crenellated towers and a chapel preserving remains of ancient frescoes. 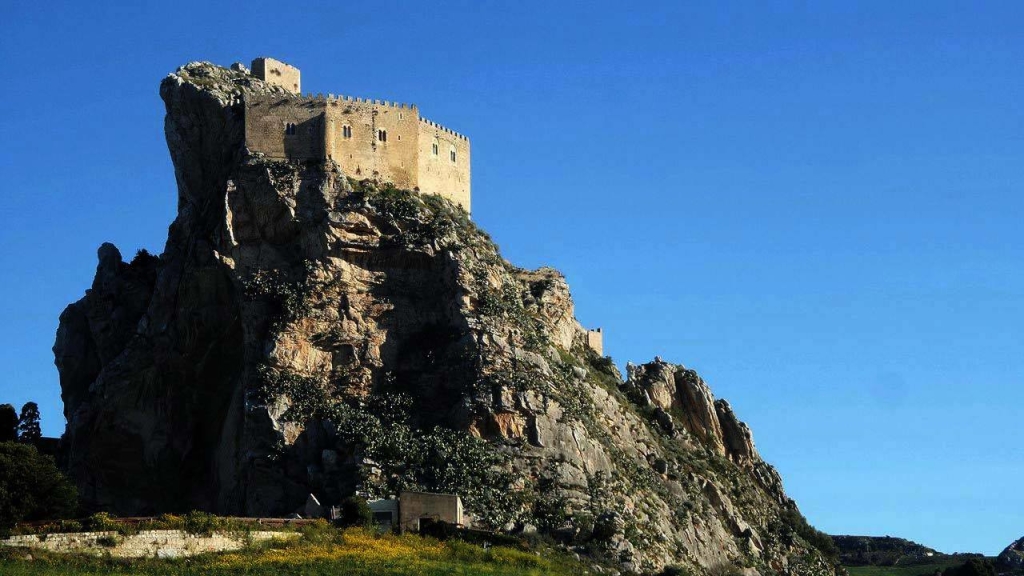 Nearby is Sutera, one of the most beautiful Sicilian villages in Italy, famous for its Arab district, overlooked by San Paolino Sanctuary, built upon the homonymous rock .

From the top of Sutera let’s direct our gaze to the valley between Campofranco and Milena, where the Platani river crosses the river Gallo d’Oro; not far from Campofranco, we see Monte Conca Nature Reserve with its spectacular sinkhole, a speleological destination of national interest.

Let’s pass on the other side of the river Platani and enter the province of Agrigento, between the towns of Cammarata and San Giovanni Gemini. Let us go up to the Nature Reserve of Mount Cammarata highest summit, where we can taste the best award-winning cheeses of Agrigento region and where the Route of Cheese was born.

Now we go to Santo Stefano Quisquina, where dreaming is mixed up with reality: here we visit the Theatre of Andromeda, a microcosm created by the sculptor-sheperd Lorenzo Reina who has represented the constellation of Andromeda in the bucolic landscape of the Sicani Mountains.
In Santo Stefano di Quisquina we can’t absolutely miss Santa Rosalia’s hermitage of and its cave. 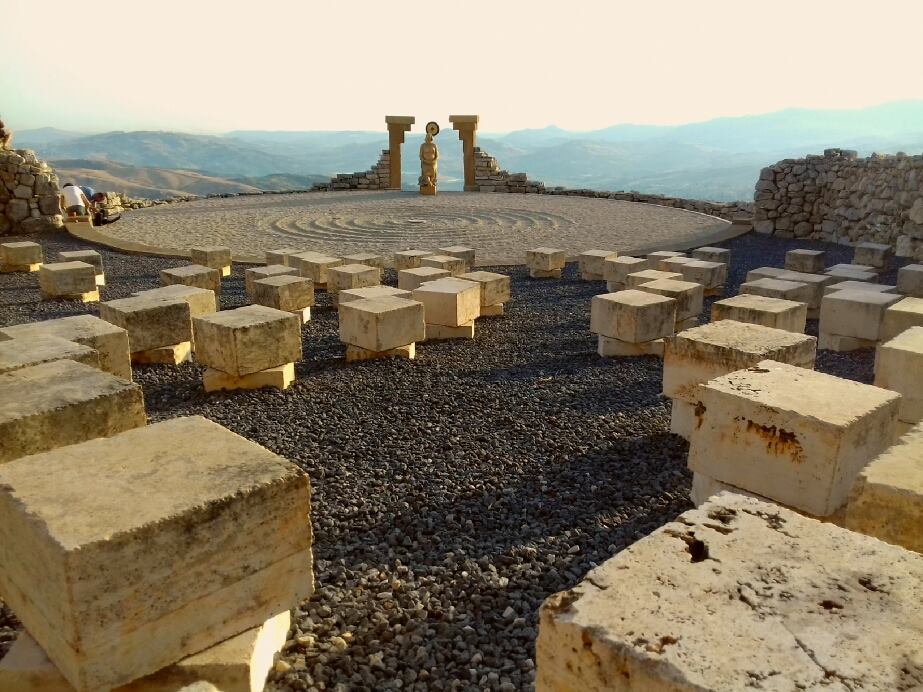 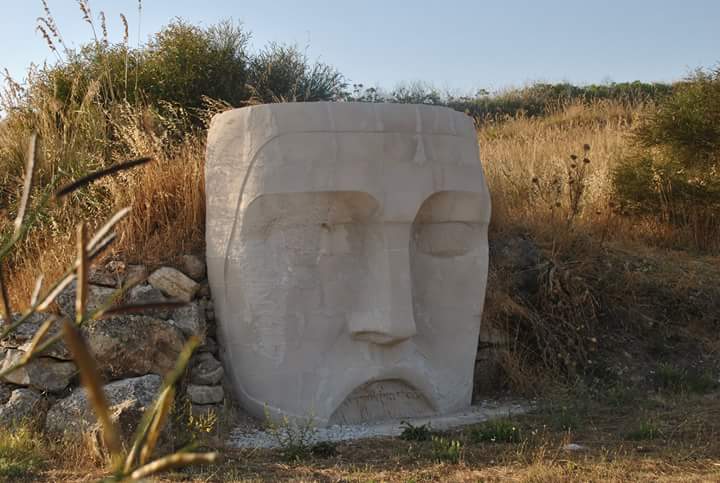 Along the road that passes through Bivona and Alessandria della Rocca we reach San Biagio Platani, famous for its Easter arches, and then Sant’Angelo Muxaro, famous for the Tomb of the Prince, belonging to a larger archaeological site.

It looks like a barrier protecting a more important area, “Monte Castello”, where, probably there was the Kamikos, an ancient fortress belonging to the Sicani, one of three ancient peoples of Sicily.

Here many graves have been found. The most interesting ones are “cave-like”, a sort of beehive made of rock-cut tombs. The archaeological findings coming from this area are now displayed in the museums of Syracuse, Palermo, Agrigento and in the British Museum in London, which also displays the golden cup . This and other evidences are a rare treasure of goldsmithing and an example of native manufacturing, with references to the Minoan- Mycenaean models, while the funerary tholos architecture leads to the powerful “Sicani” who chose this place as the capital of their kingdom: ” Kamikos of the king Kokalos “.

From Sant’Angelo Muxaro, crossing the Sicani Mountains, we continue toward Sambuca di Sicilia, one of the beautiful Sicilian villages in Italy, and next we will see the ancient villages of Burgio.

Through the Valley of Belice, we come to Gibellina to see one of the greatest, land art works in Europe: the Great Cretto by Alberto Burri. 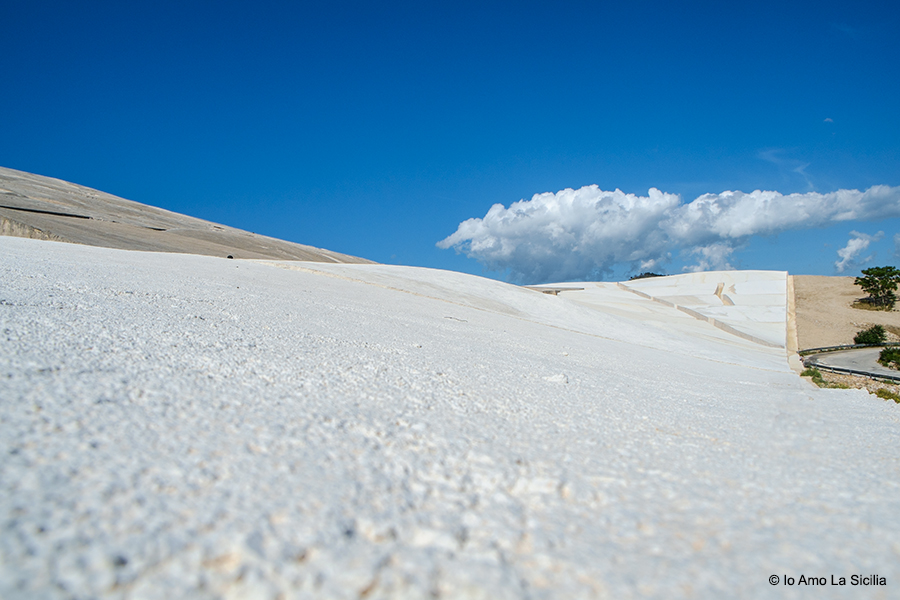 In the Valle del Belice we can taste the typical Vastedda, a famous and delicious cheese.

Crossing the Ficuzza Wood or driving along the coast of Palermo, we continue toward the Madonie Park, including many interesting villages that boast a rich, cultural heritage and that offer, as a whole, as many as 14 museums.

Embedded in the bottom of a wooded and quiet valley, the Gorges of Tiberius, a real natural jewel. Nature and winter sports also in Piano Battaglia and near Petralia Soprana, one of the most beautiful towns in Italy, where we find the Madonie Adventure Park .

We continue our route toward Gangi, another Sicilian village among the most beautiful in Italy, and we reach Sperlinga, one of the most beautiful towns in Italy too, famous for its fascinating castle excavated into the rock, built around the year 1000. 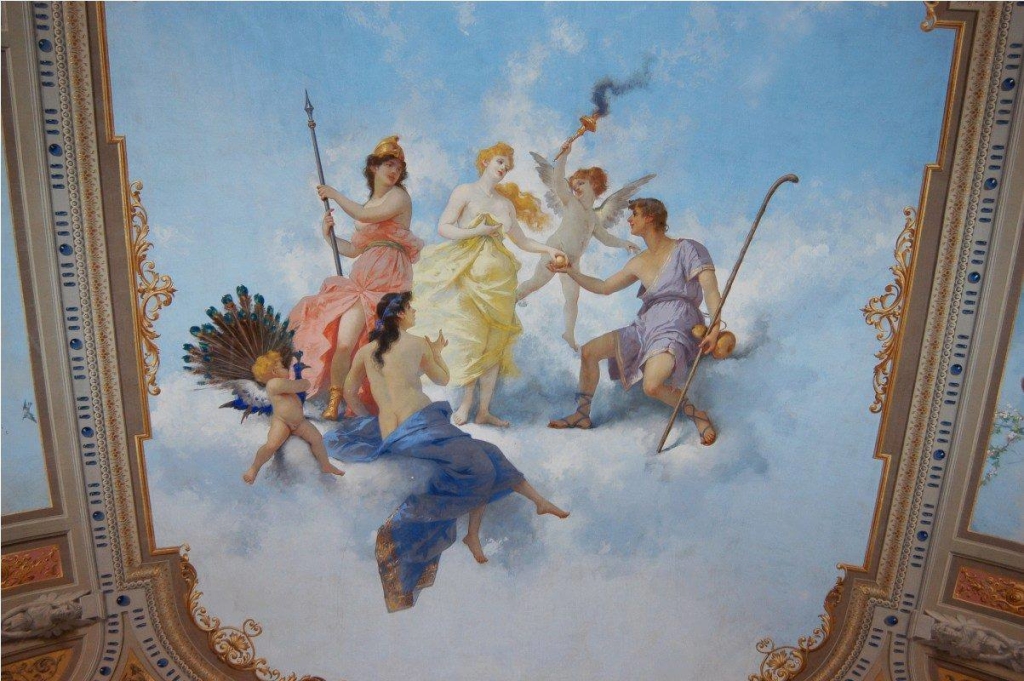 We continue toward Nicosia, the 24 barons city, with its baronial palaces, and then we go to Gagliano Castelferrato, a small village built all around the castle, excavated into the mountain above it. 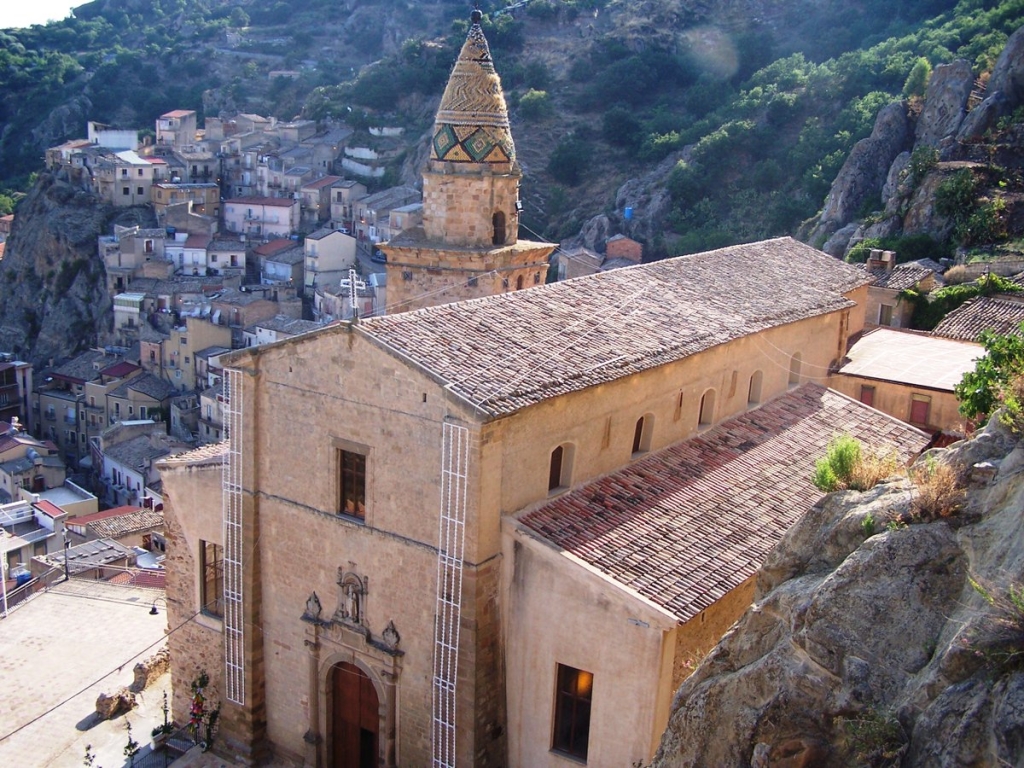 Continuing up to Troina, we enter the Nebrodi Park, the largest protected area of ​​Sicily. Outdoor sports, good food, including the Nebrodi black pig, and relaxation await us.

In Troina we visit the Duomo and we cover the Arab Norman route. Among the genuine delights we cannot miss the Guastella cù sammucu, (focaccia bread kneaded with elderflower), stuffed with sausage and tuma cheese smal chunks.

We continue until Maniace, where a beautiful park surrounds Nelson Castle which houses many objects belonged to the English Admiral. We continue toward Randazzo and visit the Palazzo Scala, the lovely old town and the Museum of Natural Sciences.

Going back towards the Peloritani Mountains, we end our journey in style by visiting Montalbano Elicona, another Sicilian village among the most beautiful in Italy.

From the terrace of the castle, enjoying the incredible view of the Aeolian Islands, we will be aware that we have just finished a journey into the most unusual and probably more authentic Sicily.