Feast of Sant’Agata in Catania

Feast of Sant’Agata in Catania

For centuries, from 3 to 5 February each year, Catania goes through a unique experience.  A whirlwind of strong emotions  accompanying the three incredible days dedicated to the  “Santuzza” , as the locals  use to name it, that involve thousands of curious and devotees every year.

Eventfull days full of faith, tradition and devotion, a Feast that is quite unique in the world; the only comparison can be the Holy Week in Seville, Spain, or  the Corpus Domini in Cuzco, Peru.

During these three days, the whole town is abuzz for the patron Saint’s Festival, the young Agata,  Virgin and Martyr from Catania, whose irresistibly attractive story, can touch every heart. The girl, a young and beautiful Christian coming from an aristocratic family, resisted the flattery of the Governor Quintianus, and struggled against any abuse of power  to defend her faith and her  moral integrity. But  the cost of this choice were painful martyrdoms (above all the cutting off of her breast)  and even her own life. 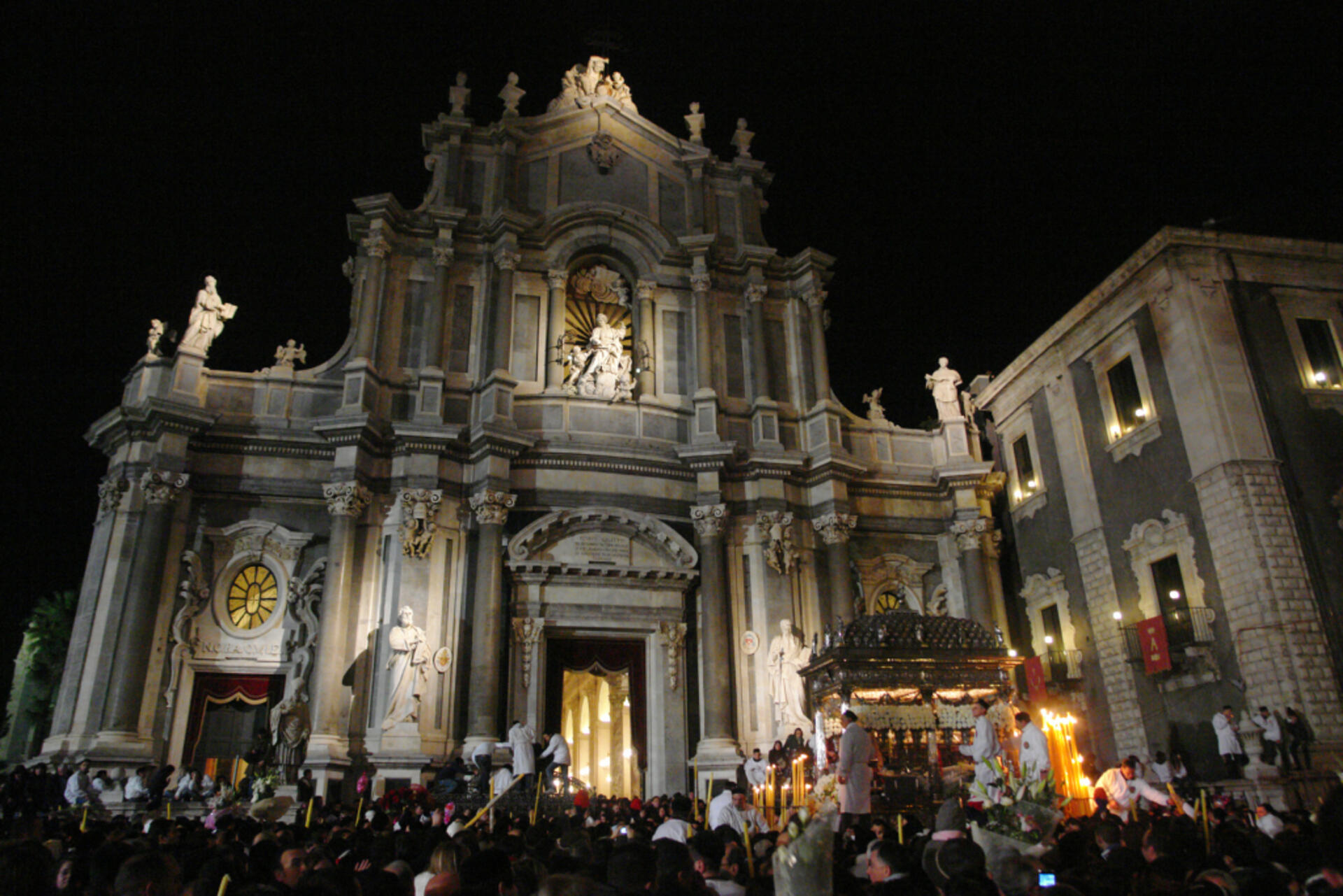 Sant’Agata in front of the Cathedral  – ph. Giuseppe Russo

We remember her for her miracles related to Mount Etna eruptions, earthquakes and some epidemics affecting Catania. Story goes that on February 1, 252 (Agata had died just one year before), the city was threatened by a violent eruption. The inhabitants of the nearby villages, terrified, took the veil that was wrapped around her tomb, and used it as a shield against the lava flow. The white veil suddenly turned red and stopped the eruption. It was February 5, the day of her martyrdom anniversary. 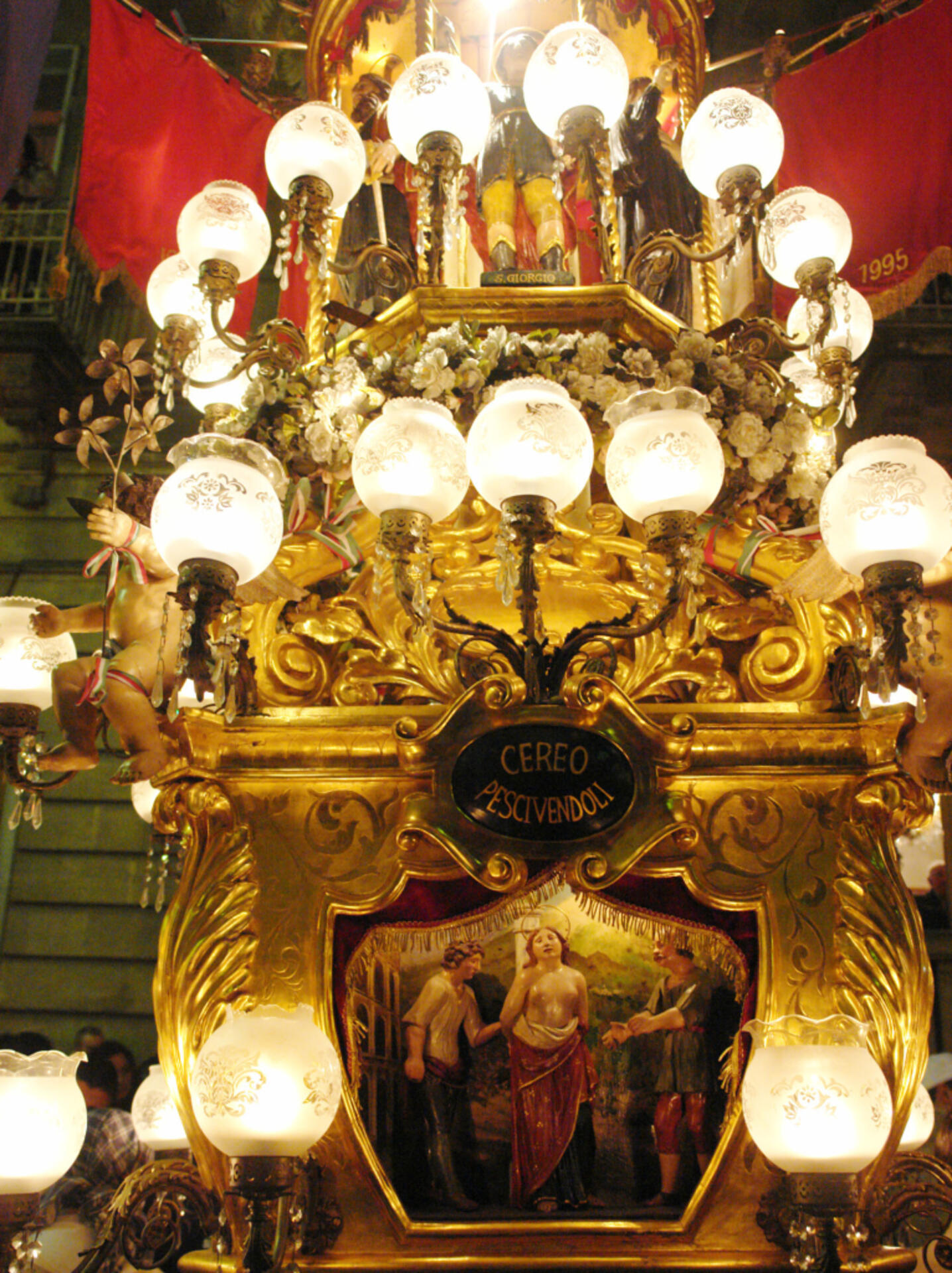 Catania was rescued and, from then on,  the city, splendily lit up with fairy lights, is crowded every year with visitors and devotees from all over the world while Sant’Agata, in her silver cart, the “vara“, goes meet her people, throughout the whole town: working class districts and uptown

The Festival begins on February 3 with the long and solemn noon procession that goes from the Church of Sant’Agata alla Fornace up to the Cathedral, where the offering of the wax rite takes place. Eleven big candles, representing  some local guilds, and the two Senate carriages close the procession: an eighteenth-century sedan, followed by a smaller car, carry the city’s administrators.  In that same evening, ‘a sira’ u tri,  a spectacular fireworks show is held in Piazza Duomo. 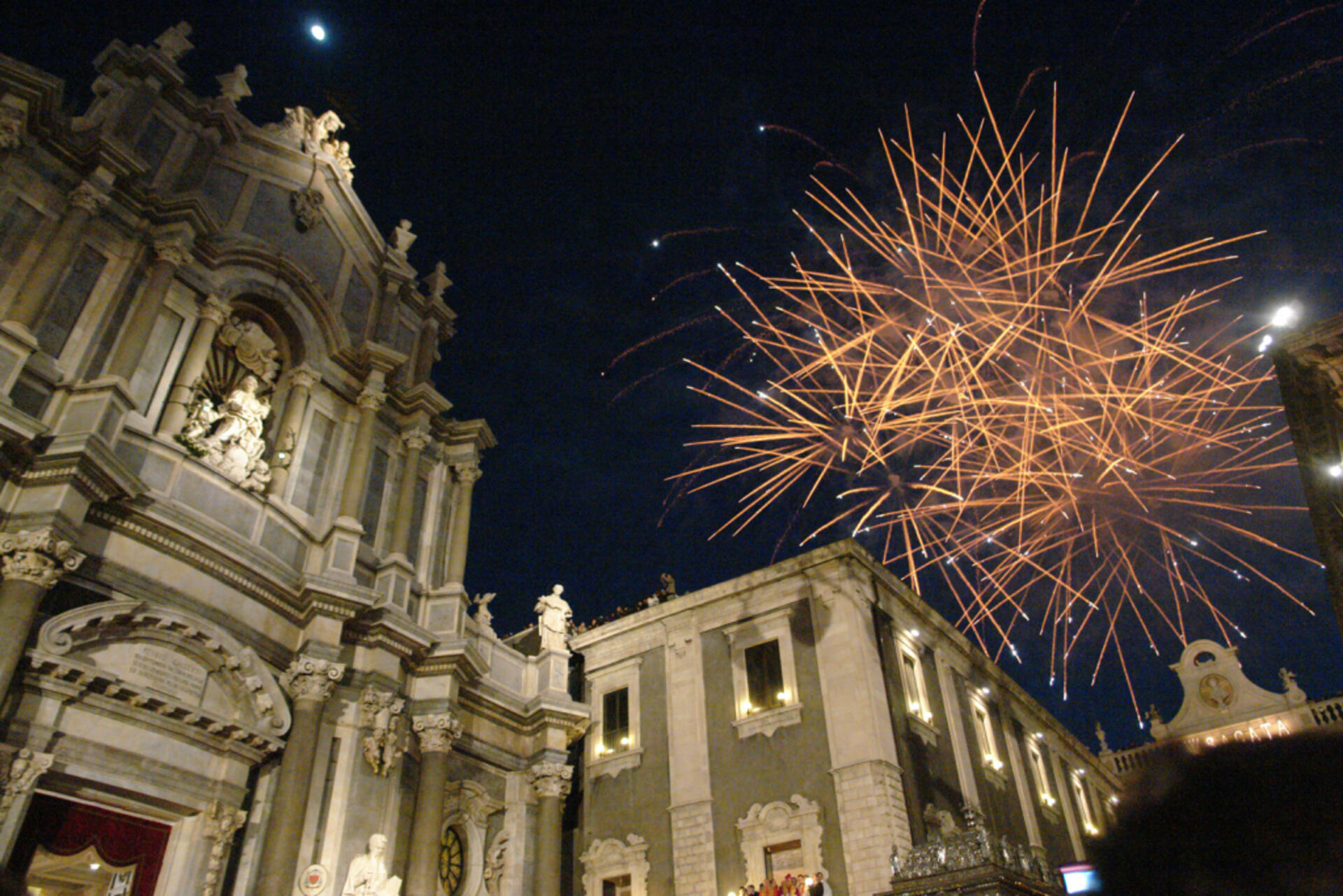 In the early hours of February 4, after the Messa dell’ Aurora  (Dawn Holy Mass) , the bust of Saint Agata  leaves the safe room inside the Cathedral where it is permanently kept. This is the most delicious climax to the crowd’s anticipation: people are strongly moved and, among their screams and applauses, accompained by religious songs, the procession begins. The Saint and her relics are brought outside the ancient city walls , drawn by a silver carriage. The procession first moves towards the church of Sant’Agata alla Fornace, where her martyrdom took place, then to Sant’Agata al Carcere; there, an olive tree (right in front of the building) recalls how the virgin, escaping from the men of Quintianus, managed to feed herself thanks to its fruits. Running quickly  while dragging the heavy carriage up to the “Cappuccini slope” is an ancient tradition too; in the meantime, the townspeople from Catania, with their traditional black skullcaps  and votive white tunics, named ‘u saccu, wave a white handkerchief and invoke their Patron Saint: “Tutti devoti tutti, cittadini, viva Sant’Agata”.  (Are we all devotees? Townspeople, long live St. Agata!).” And then another fireworks show. 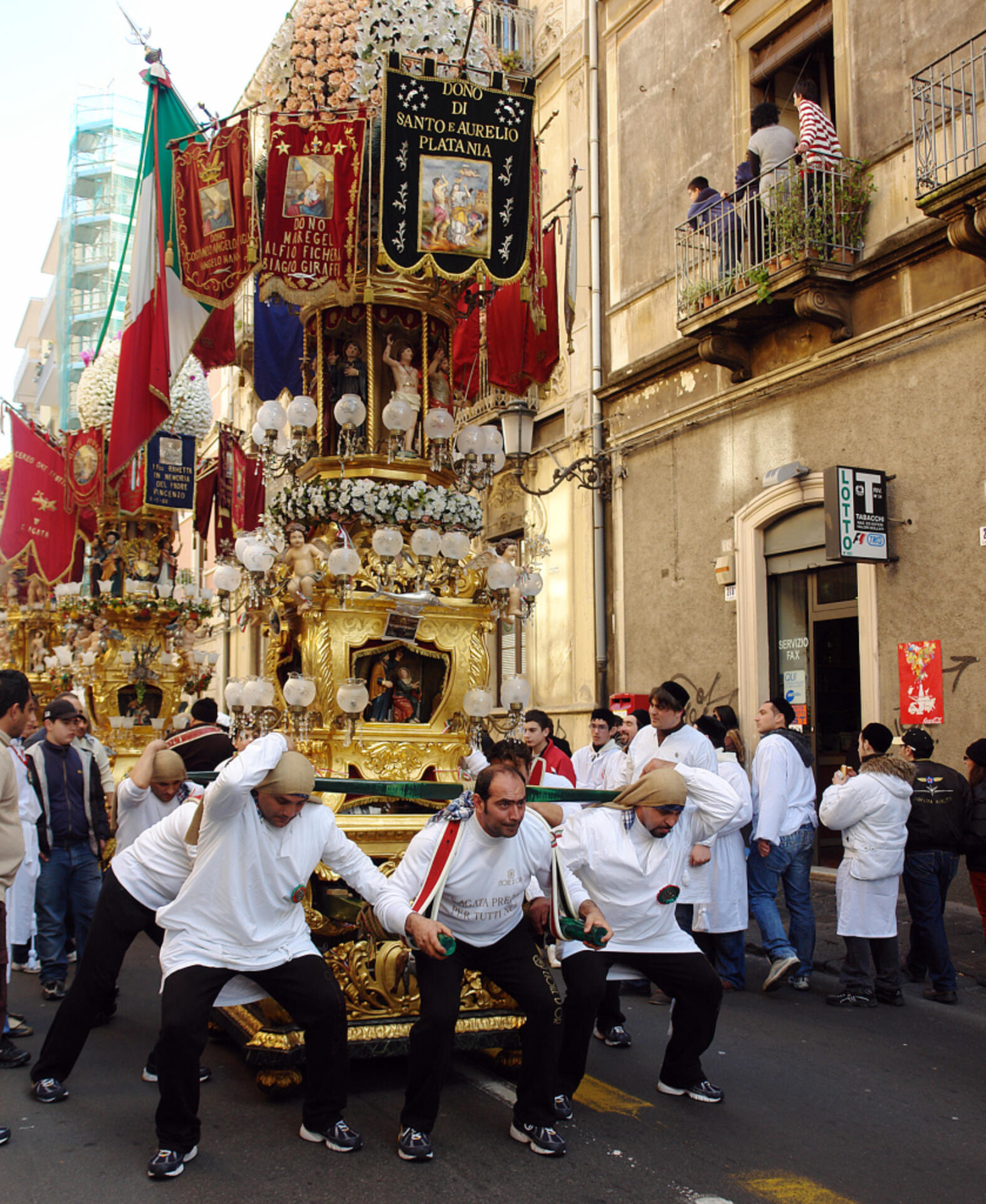 One of the “Candelora” in procession – ph. Giuseppe Russo

February 5 is the “peak” of the feast, the most eagerly awaited day by everybody. In the afternoon, the cart leaves Piazza Duomo to tour inside the city; it advances very slowly and crossing via Etnea it moves ahead up to piazza Università. It then moves towards piazza Stesicoro and, further, to Villa Bellini. The cart reaches Piazza Cavour – Piazza Borgo for people from Catania –  late at night.  After a long and spectacular fireworks show, the “vara” reaches the cross between “Quattro canti” and  the San Giuliano slope. 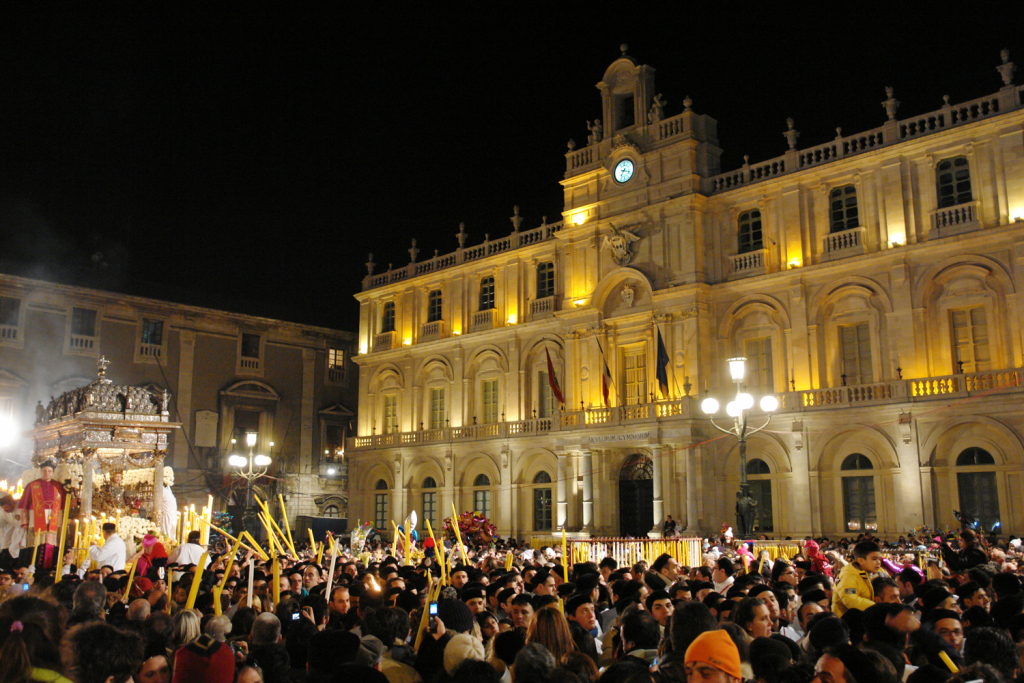 Here an exciting game of endurance of all candelore precedes “la corsa del cordone” a cord pulled by thousands of townspeople (if all goes well, that means a good harvest next year).  The race ends at the intersection with Via Crociferi, where the charming singing of the cloistered Benedictine nuns pays homage to the Saint. Then it is almost a race back to the Cathedral, but the daylight has already become very clear. It’s an emotional time, for all screams stop: you can see happiness on people’s faces for having spent three intense days with their Patron, but tiredness also appears. However, with their last whisper of a voice, illuminated by the last fireworks afterglow, they still exclaim: “Cittadini, viva Sant’Agata!” (Townspeople, long live Sant’Agata!). 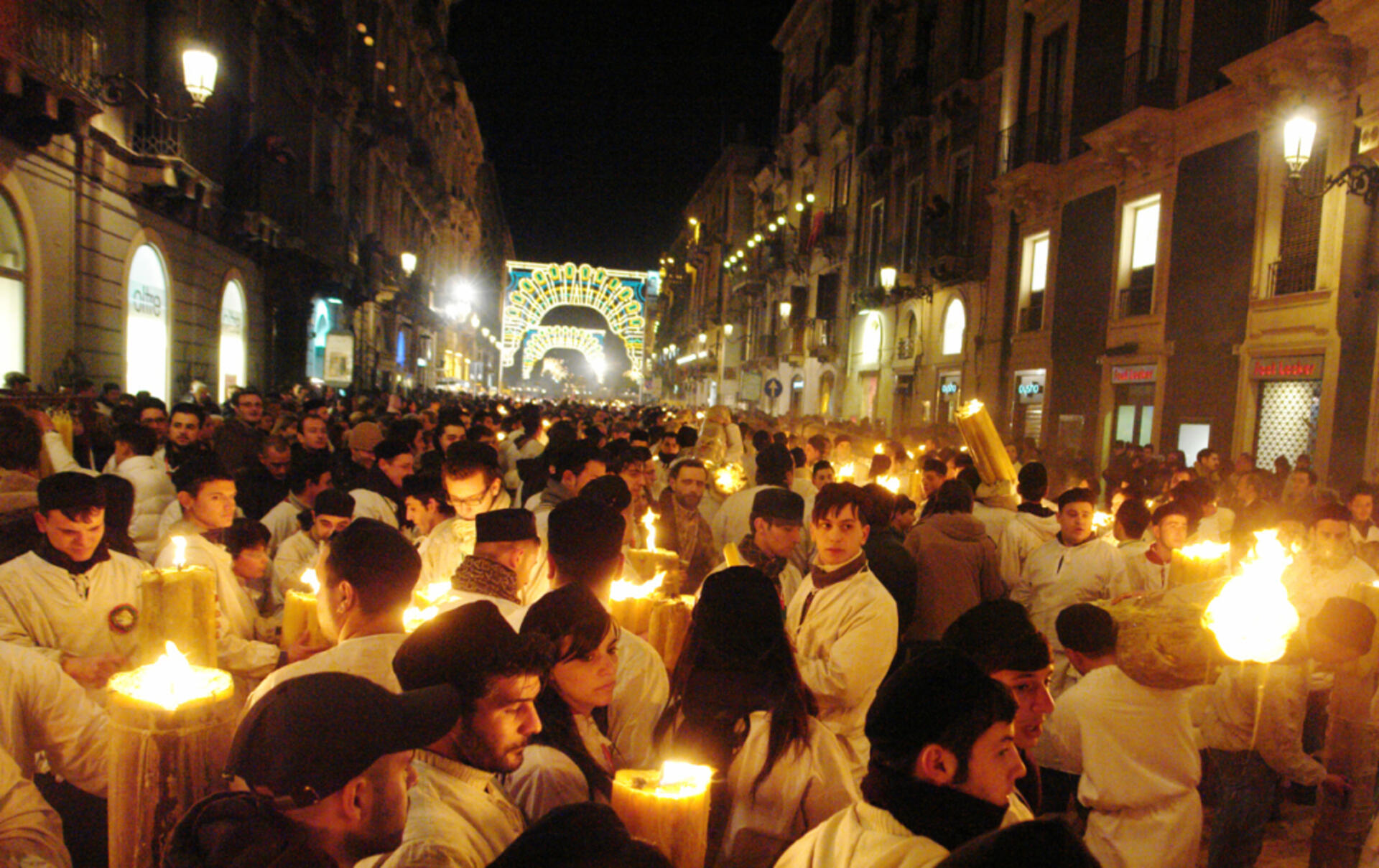 The desserts of Sant’Agata. History and legend …

Sweets and cakes related to the Virgin’s story are inevitable in any pastry shop of Catania: : the cassateddi di Sant’Aita also called minni di Sant’Aita whose shape recalls the saint’s martyrdom (she underwent the cutting off of her breast, for having rejected Quintianus’ love in favour of the Christian faith) and the olivette (small olives). 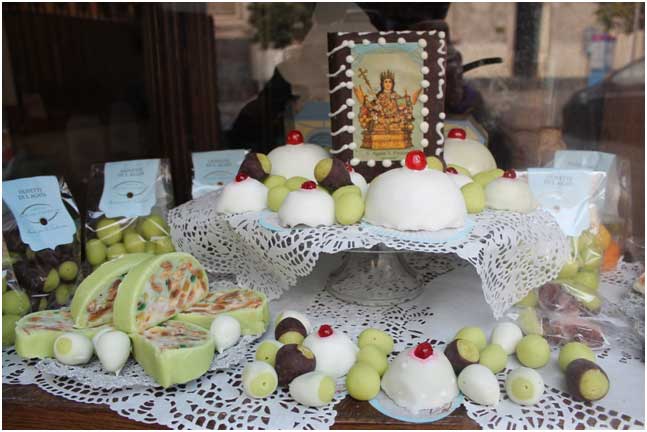 These sweet olives are related to the tradition holding that the young woman, while fleeing from the men of Quinziano, sheltered under an olive tree, that had miraculously come out of nowhere , and which allowed her to eat and rest.

The feast held on August 17  is perhaps the oldest one, as it is linked to the spontaneous festivities occurred on the night of 17 August 1126, when Sant’Agata’s mortal remains, stolen in 1040, arrived in Catania from Constantinople, brought by the two soldiers Gisliberto and Goselmo. Celebrations are held in a very small way, not even comparable to the grandiose February  festivities … Besides the Mass in honor of Sant’Agata, a short procession takes place in the late afternoon. The chest containing the Saint’s relics parades aound the Cathedral’s area, through Via Dusmet towards Piazza San Placido and comes back to the Cathedral by crossing Via Vittorio Emanuele, while, at Catania Port an extraordinary fireworks show takes place. A pleasant peculliarity of this summer edition Festival is the fireworks show made from the roof of San Placido church