Catania old town still resounds of the glories of its Roman period through the amphitheater situated in Piazza Stesicoro, whose only visible  portion was brought to light in the early 1900s

The largest part of of the structure actually lies under the nearby via Neve, via Manzoni, via del Colosseo and via Penninello, as, soon after the 1693 earthquake , its ruins were used as foundations for some buildings that overlook the square – such as Villa Cerami, the headquarters of the Department of Law-  or surround it, such as the church of San Biagio and Palazzo Tezzano. 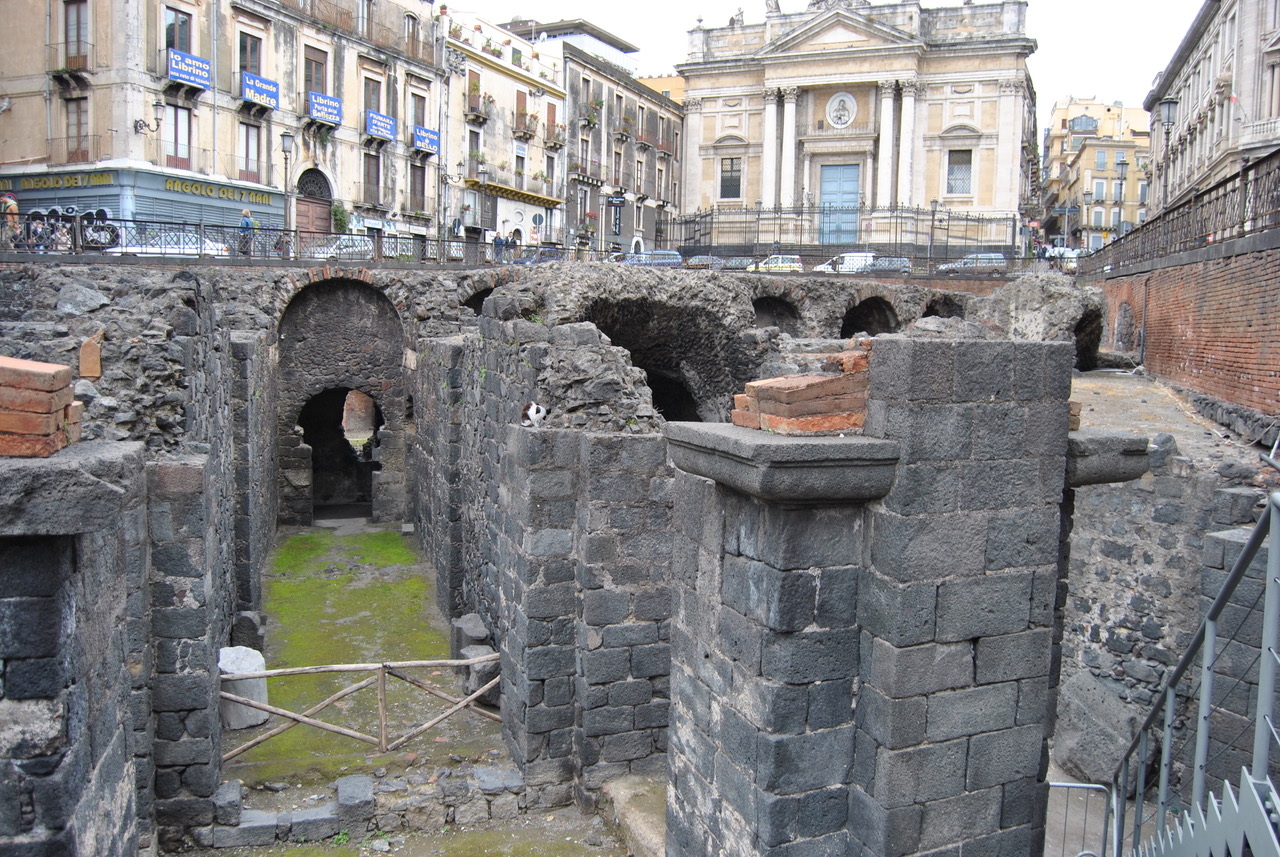 Originally the building stood on the outskirts of the city, along the road that connected Catania to the hinterland, and close to the acropolis where the Benedictine Monastery now stands. The structure was mainly  made of lava stone, and developed itself around a 70 x 50 m elliptical arena, with radial walls, pillars and vaults. The arches were built with large rectangular red bricks, while the cavea – 32 tiers settled over three levels, separated by two corridors and divided into sections by small lava stone ladders – was probably made of limestone blocks and partially covered with marble. Furthermore, the building was adorned with columns, statues and bas-reliefs, while a system of beams and stone blocks supported the fabric cover (velarium) fixed at the top for protecting the spectators from rain and sun. 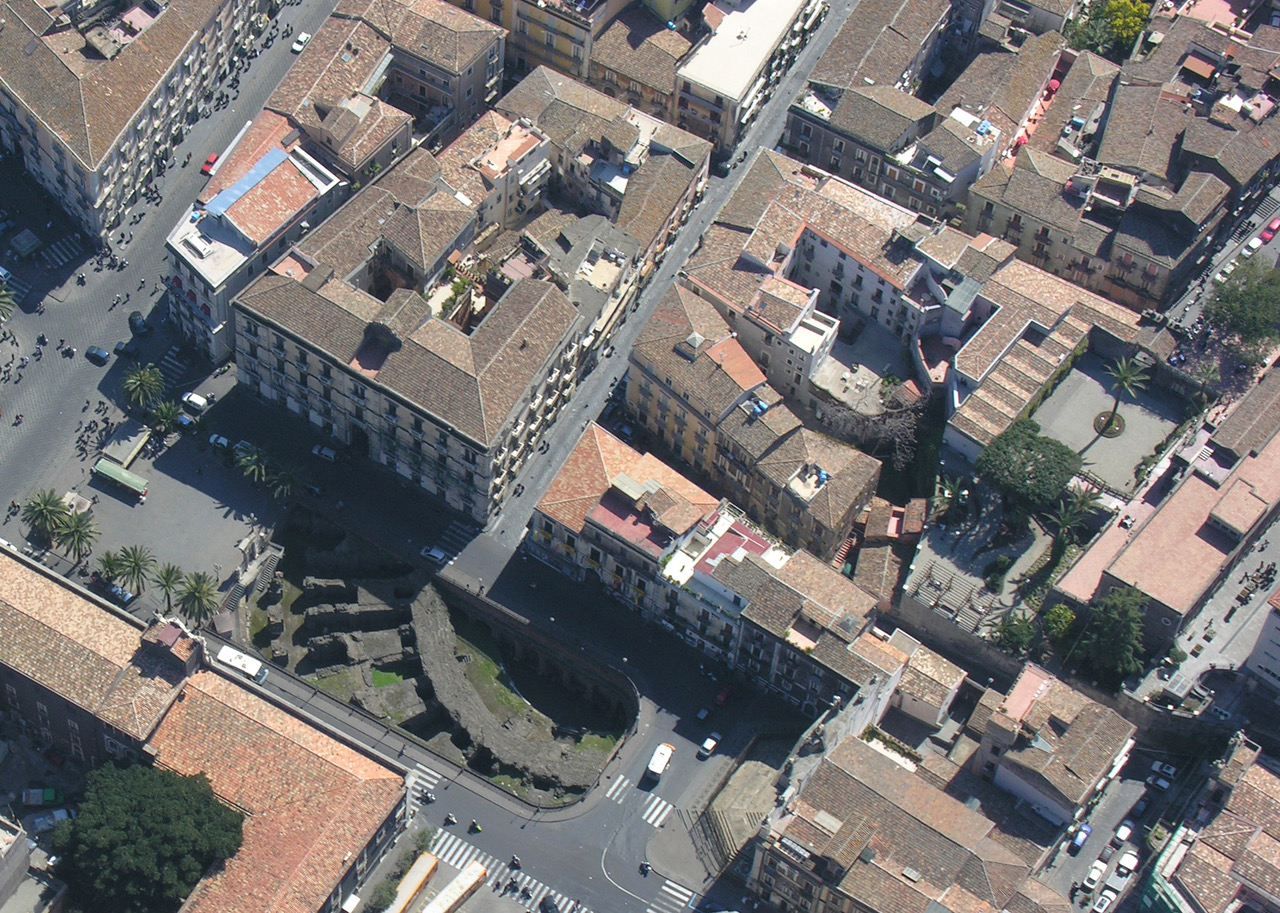 Small sized at the time of  its building (in the mid 1st century AD), the amphitheater of Catania was enlarged around the mid 2nd century AD when it reached a 125 x 105 m extension, so that it could accommodate over 15.000 spectators, thus becoming one of the largest theaters in the Roman world.

In the 4th century AD, following the decline of the Roman Empire, the building was abandoned and became occupied by merchants and craftsmen’s workshops that remained there until the 6th-7th century AD.

Later on it was reduced to a quarry and, during the Sicilian Vespri, the Angevins used its walkways to break into the city; therefore its external arches were subsequently walled up and the ambulatories became filled with rubble. After the 1693 earthquake, it was more and more  covered by many overlapping constructions, so that soon the memory of the theater was lost until the excavations of the early twentieth century. 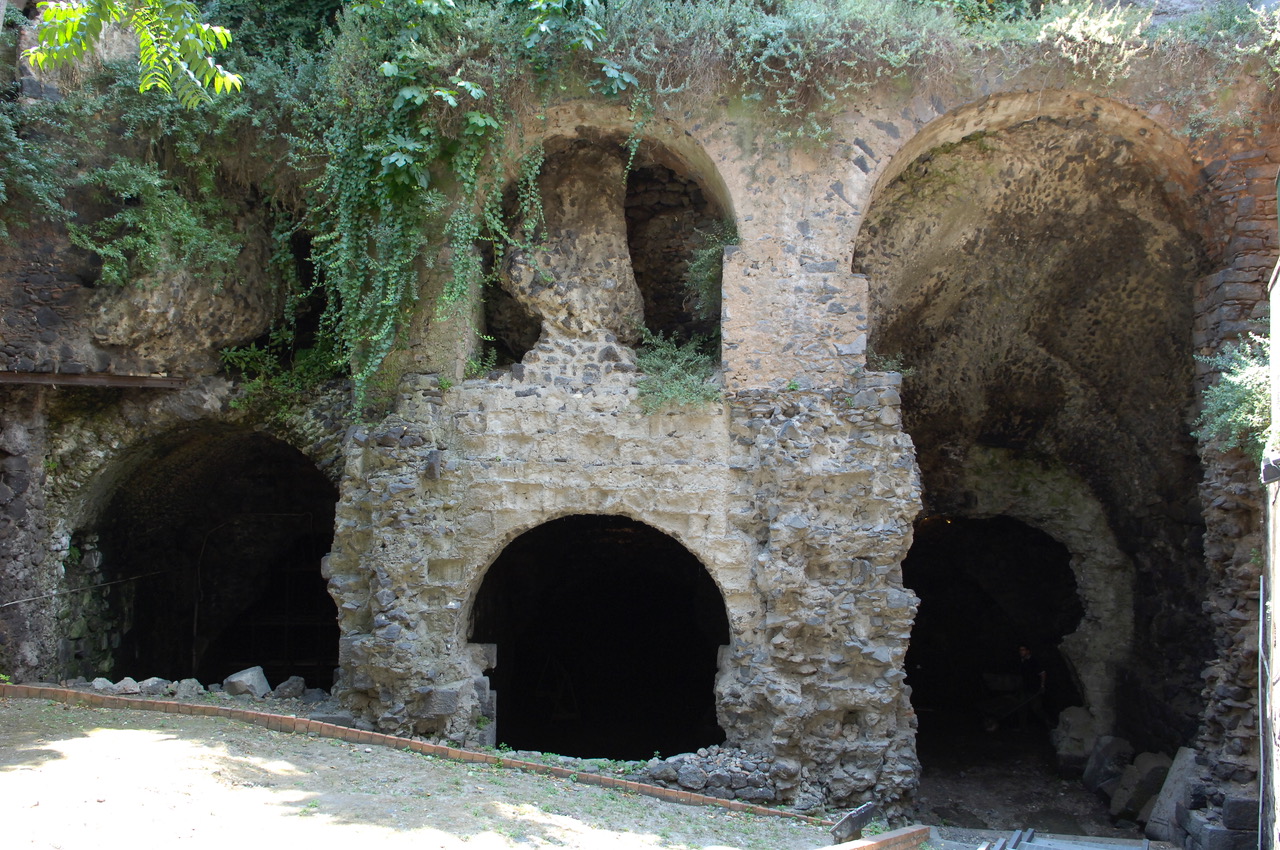 Today the portion brought back to light is open to public, and some 3D recreations give visitors an opportunity to take a look to the building’s original appearance.

Watch the trailer of the Roman Amphitheater virtual reconstruction

Find out more with the audioguide of  izi.Travel audio tour