Some places can be undoubtedly stated as the most enchanting of the earth, and if  Mount Etna inside looks like hell, we can rightly say that, outside,  it is the nearest  thing to Paradise” (P. Brydone)

Mount Etna is the highest volcano in Europe, and one of most active of the world.  It’s impressive size ( more than 3327 meters high with an average basal diameter of 40 km)  overlooks  the whole region. Its spectacular eruptions and its fiery lava flows, has always aroused the interest of scientists along with the curiosity of visitors from all over the world.

Since 2013 Mount Etna is in the Unesco’s World Heritage List  for its geological peculiarities of planetary relevance.

Its first eruptions occurred about  570,000 years ago, in the Ionian area, long before that  Etna– as we know it today –  was formed.

The building up of the volcanic edifice has been interrupted over the centuries by several collapses.

The current Valle del Bove,  originated 9200 years ago,  is a consequence of  Etna collapse phase that involves most of  the recent geological history of the volcanic complex. Today the summit area consists in 4 summit craters, the Central one, the West Chasm or Bocca nuova (new mouth) , the North sub-terminal crater and the Southeast sub-terminal crater apparatus.

There are several evidences of the Volcano eruptions starting from the classical period; among the most recent , we recall the 1669 eruption, which determined the formation of the Monti Rossi and reached Catania,  and  the 1928 one that reached the town of Mascali.

Etna, also called  Mongibello (from the Latin word mons and the Arabian word gebel, that is mount), is one of the most monitored volcanoes in the world.

All updates on the volcanic activity are available at the INGV Catania section website. 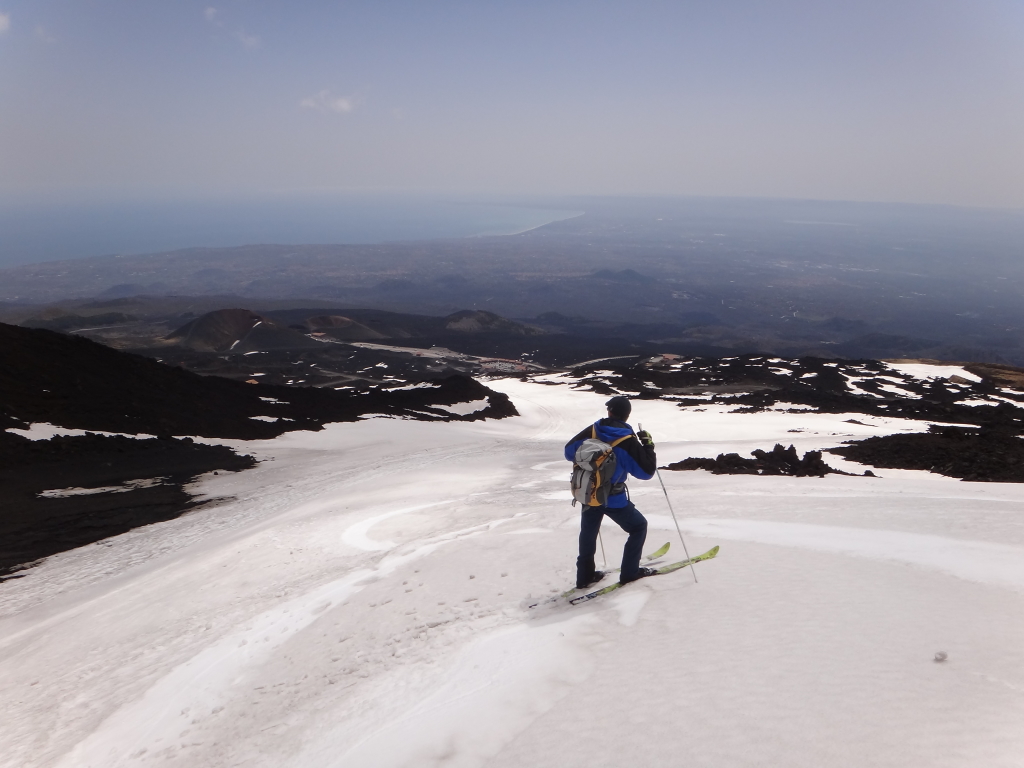 Appreciated in summertime by hikers who want to visit the active craters of the summit areas, this volcano offers in winter the extraordinary opportunity of practicing snow sports, just a short distance from the sea. 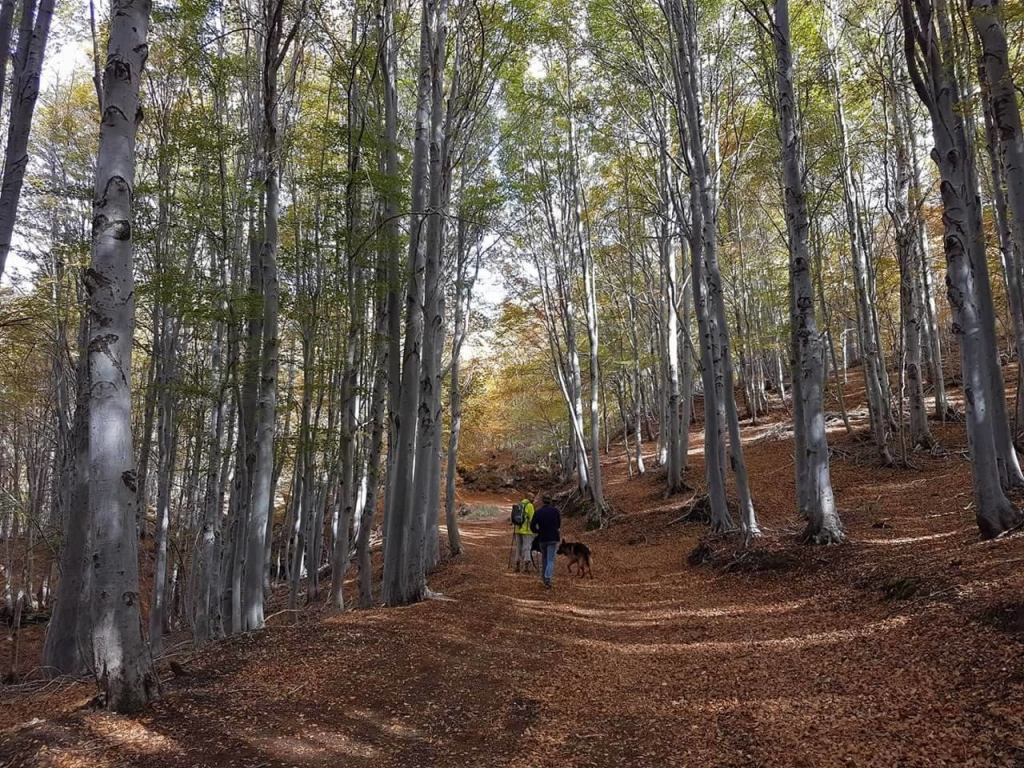 The various hiking routes climb along the nature trails of the Etna Park, among woods and verdant orchards, up to the highest altitudes with fascinating views of lunar landscapes, ancient lava flows, caves and active fumaroles, revealing the charm of this extraordinary natural oasis.

Evocative lunar landscapes, typical of the volcanic activity, are interspersed with natural environments of rare beauty. The large rivers flowing around the Volcano, the Alcantara to the north, with its natural canyon of  Alcantara Gorges, and the Simeto to the west, have modeled their paths following the lava of Etna, creating amazing natural sites. 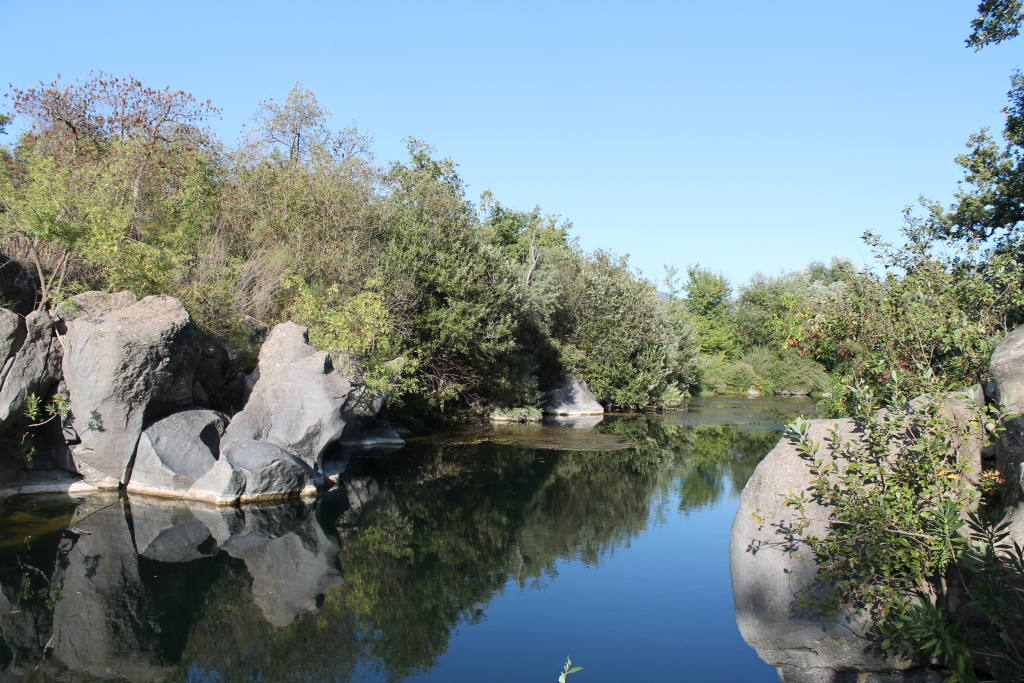 In relation to the different altitudes and exposure of the slopes, Etna offers a high biodiversity with a rich Mediterranean scrubland and numerous wood species: birches with clear bark, evidence of ancient glaciations, oaks, beeches,  pines, brooms of Etna and chestnut trees. In the area of Sant’Alfio we find th the oldest and largest tree in Europe, the Hundred Horses Chestnut, awarded with the title of UNESCO Messenger of Peace. 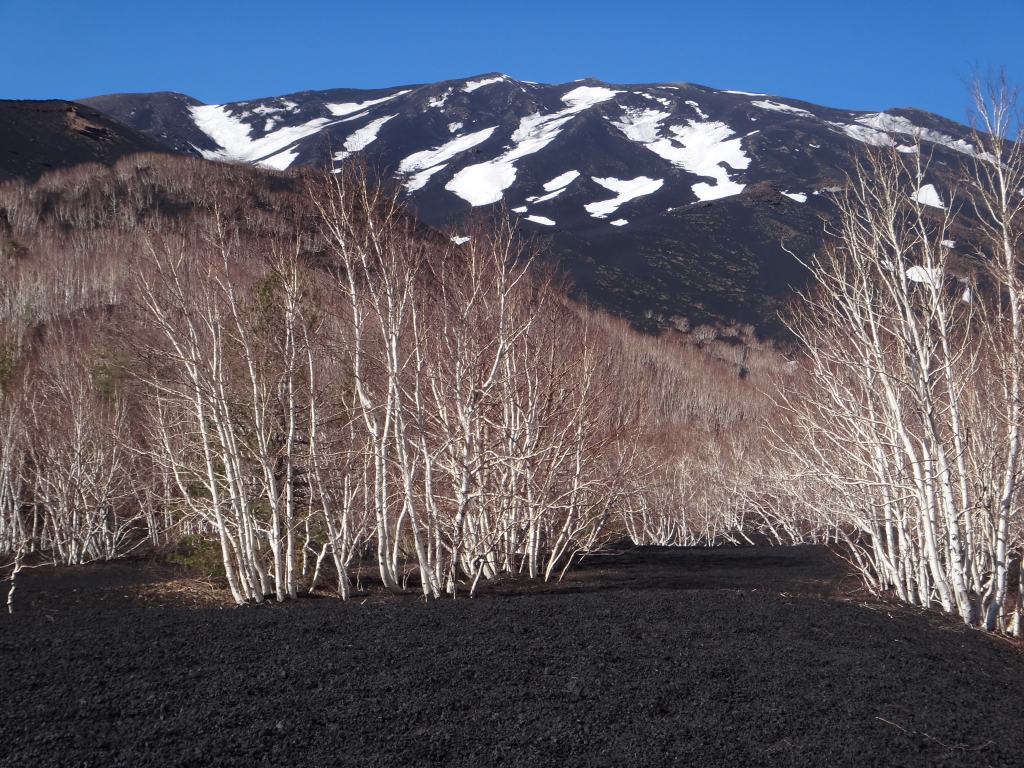 So many sporting activities can be practiced on Mount Etna: downhill and cross-country skiing, ski mountaineering, trekking, rafting, paragliding, horseback riding, just to name a few.

The ski resorts of Nicolosi in Piazzale Rifugio Sapienza (Southernside Etna) and Piano Provenzana – Linguaglossa (Northernside), provide good lifts leading to the red and blue downhill ski slopes, or to the ski schools and the equipment agencies rental. Those who prefer Nordic skiing can find natural routes traced by the Etna Park Authority and by the Forest serviceat Piano Vetore (Nicolosi), Piano Provenzana (Linguaglossa) and in Maletto area. 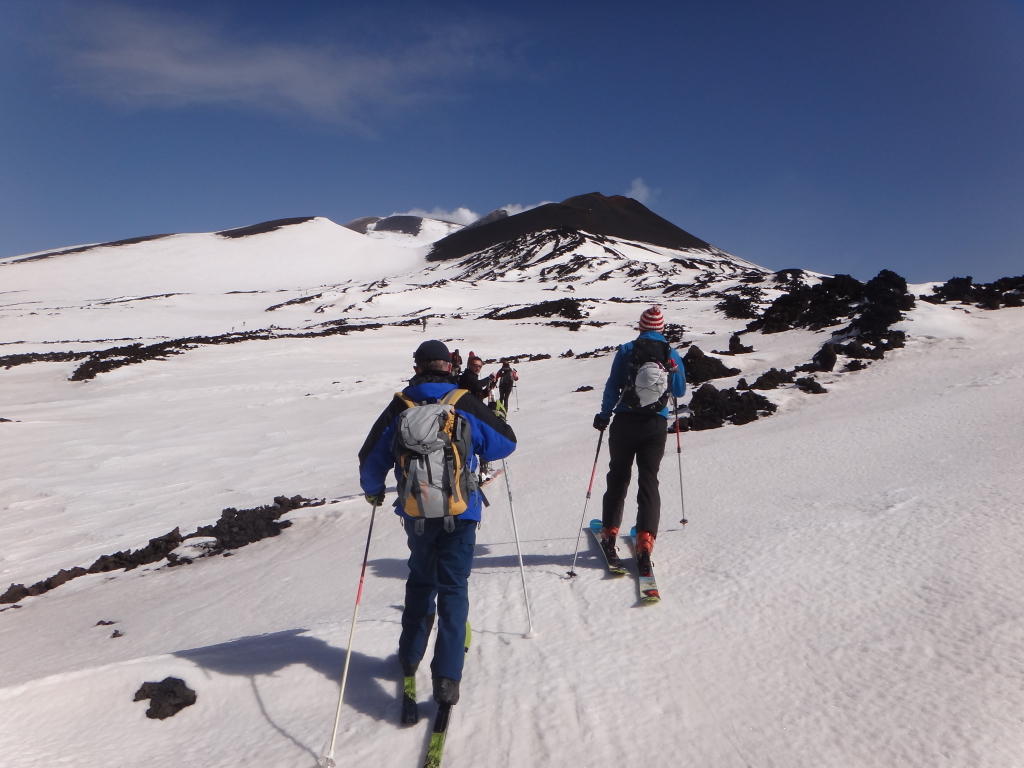 The most requested activity is  no doubt  the excursion to the craters, to be done safely with the help of expert guides and with appropriate clothing. Trekking shoes or trainers and windjackets are recommended, even in the height of the summer season.

The areas near the summit can be accessed both from South or North sides of Mount Etna.
Both of them offer spectacular ways to climb to the main crater:

The area offers the opportunity to visit the lava flow caves, guided by expert speleological guides. Among the best known caves: Grotta del Gelo, where we find the southernmost glacier in Europe, Grotta dei Lamponi, dei Ladroni and Grotta Serracozzo. 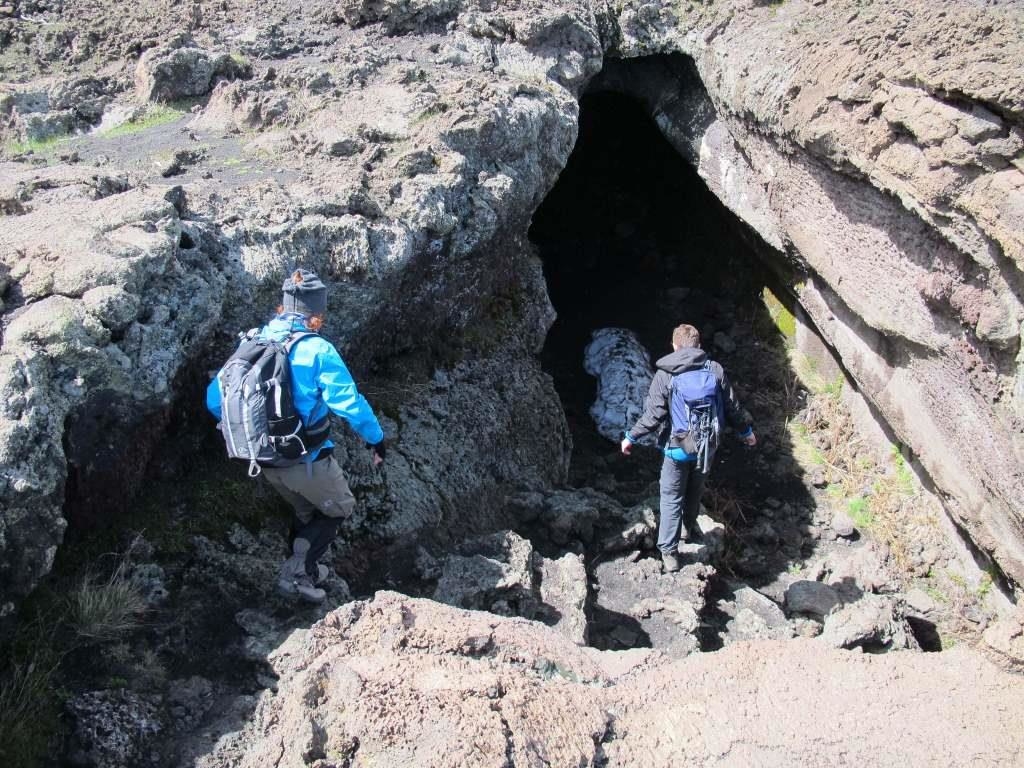 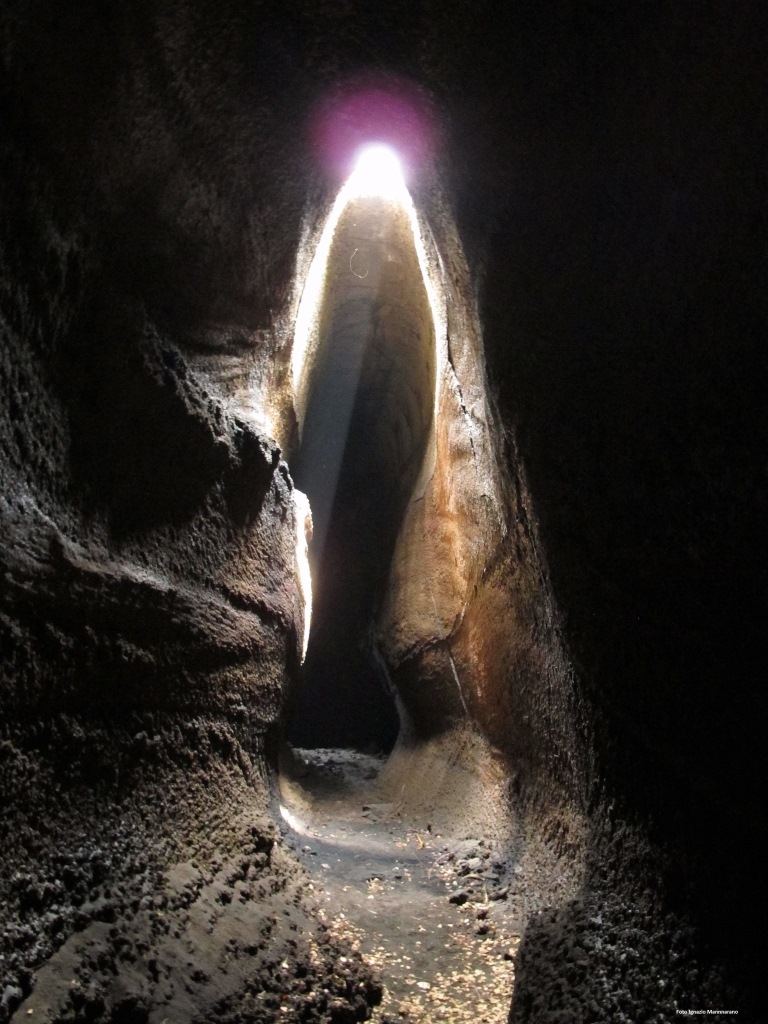 You can trek all year round, exploring  itineraries suitable for beginners as well as for experts trekkers. Etna Park not only organizes guided tours with expert staff, but also provides many nature trails with different level of difficulty: from the easiest paths to the most challenging routes at high quote, with steep gradients and more days. 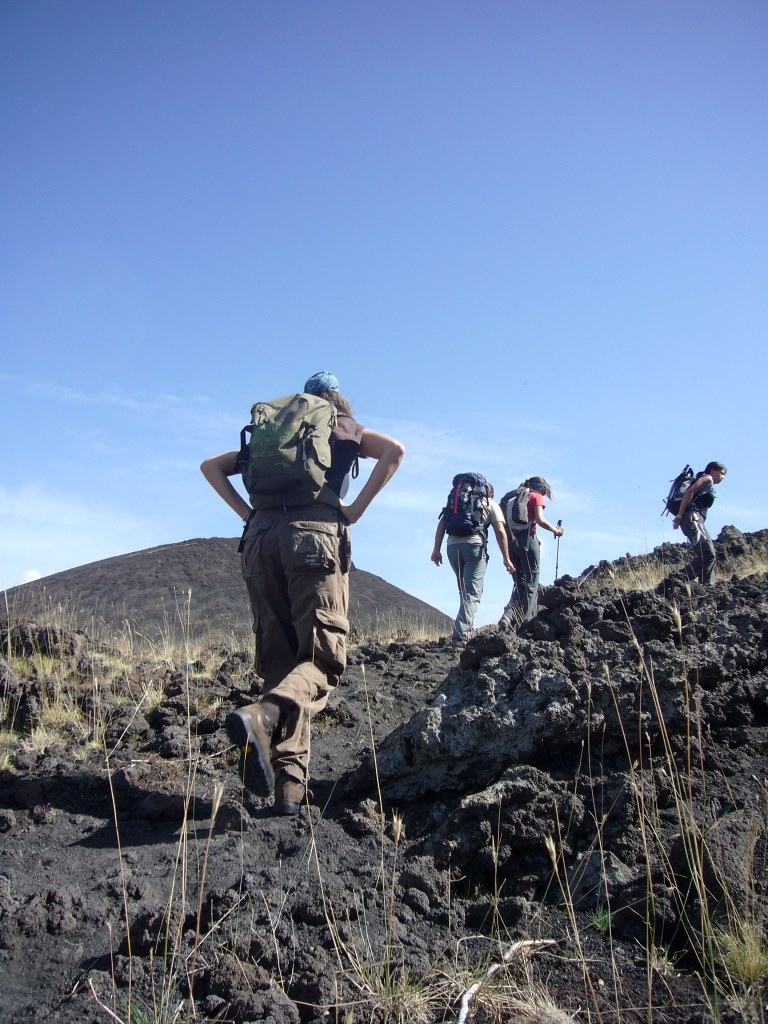 In winter, snowshoe hikes are organized by sport companies and by Etna Park inside the usual winter trekking program. Snowshoeing on Mount Etna is a truly unique experience: what’s more exciting than seeing the incomparable spectacle of the blue Ionian sea under you, while hearing a rumbling volcano?

Ski mountaineering excursions on Etna, when it is covered with snow, can always be done and – above all –  there is no danger of avalanches !

So many paths for mountain biking, from the easiest routes, suitable for everyone and for any  age, to the most challenging ones climbing along the volcano slopes. One of the best known is the Pista Altomontana that from Piano Vetore – south of the volcano, goes up along the western side up to Ragabo Pinewood, near Piano Provenzana, to the north east.

It’s so nice to go at a donkey pace on the trails of Etna! Etnadonkey offers donkey rides, a new way to discover the wonders of this amazing mountain aboard docile, strong, and faithful donkeys. The horseback tours, on the other hand, are organized by different equestrian companies and lead by expert nature guides. 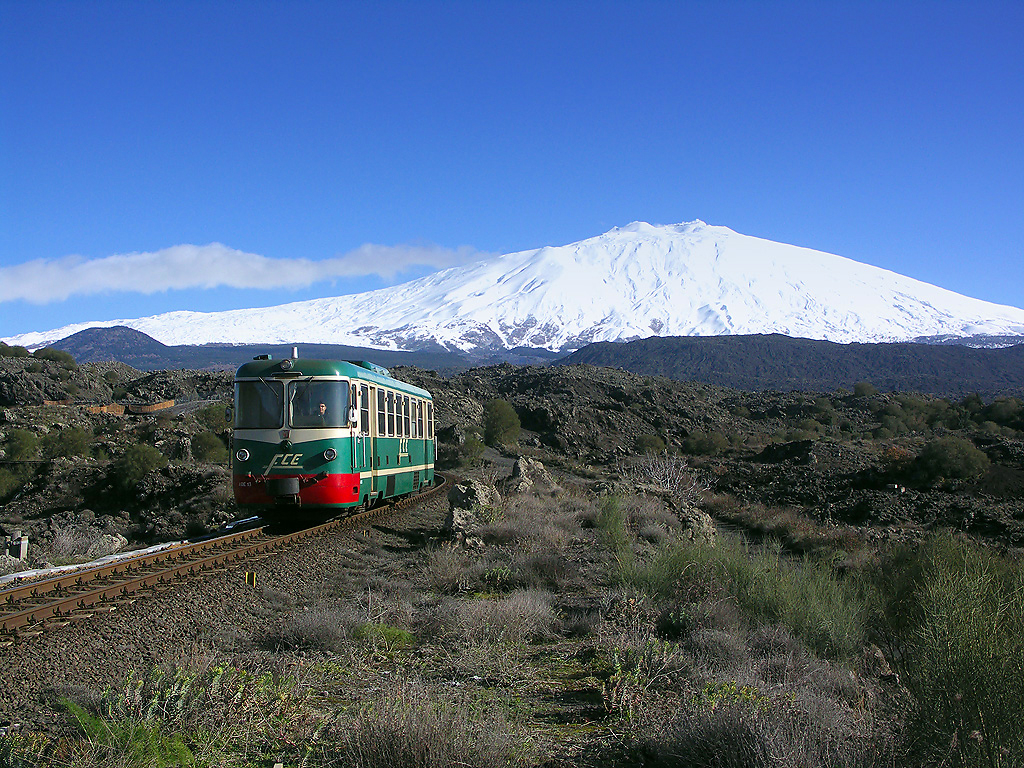 For the hopless romantics we recommend the railway tours by Circumetnea trains, departing from Catania- Stazione Borgo and arriving in Riposto.
So let’s go and discover the most beautiful wineries and the gastronomic wonders by Etna Wines Train, the most beautiful landscapes of the area that can be also be covered by bike,  aboard the Two-Wheeled Train and other interesting itineraries …

In the sweet summer nights, from June to September, a visit to the Astrophysical Observatory in Ragalna, in Contrada Serra La Nave, on the southern side of Mount Etna, is unmissable for the Vault of Heaven devotees and star observers. Reservation is required. 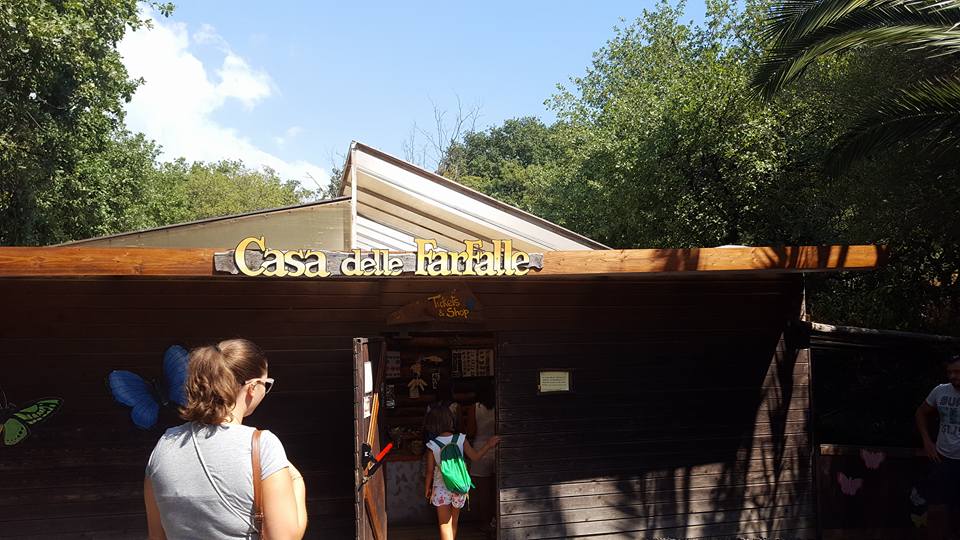 Suitable for families, school groups but also for those who want to spend a outdoors day, Monte Serra Park in Viagrande proposes the Butterflies House, many hiking trails,  synthetic ski slopes, picnic areas, bike trails and much more. 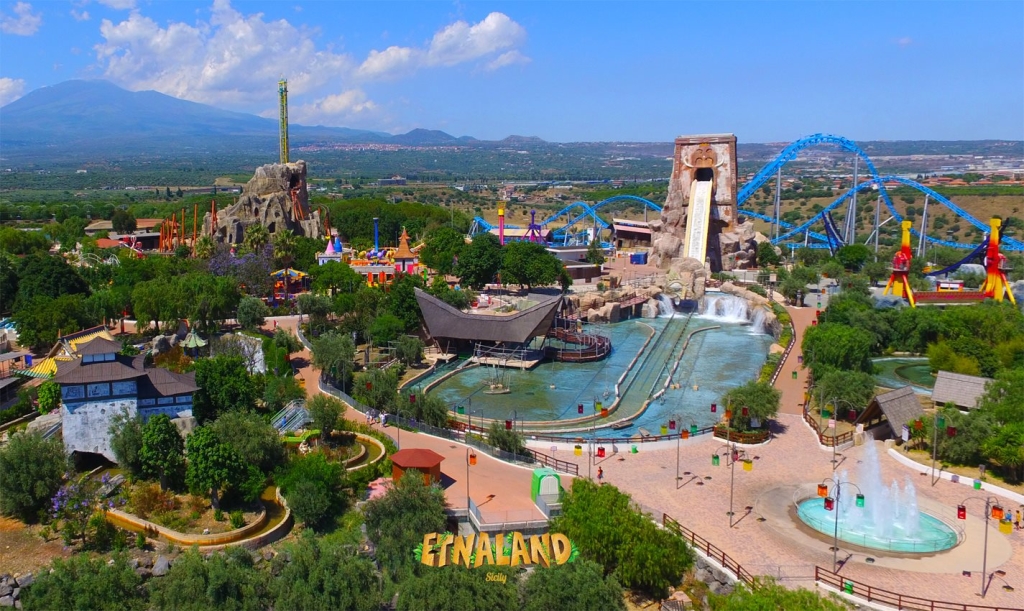 Etnaland Fan Park, in Belpasso, provides an exciting experience with its Water Park wonderful attractions its  Prehistoric and Theme Park. In this park, among the 20 best water parks in the world, you can also live fantastic experiences in AVR (Augmented Virtual Reality). 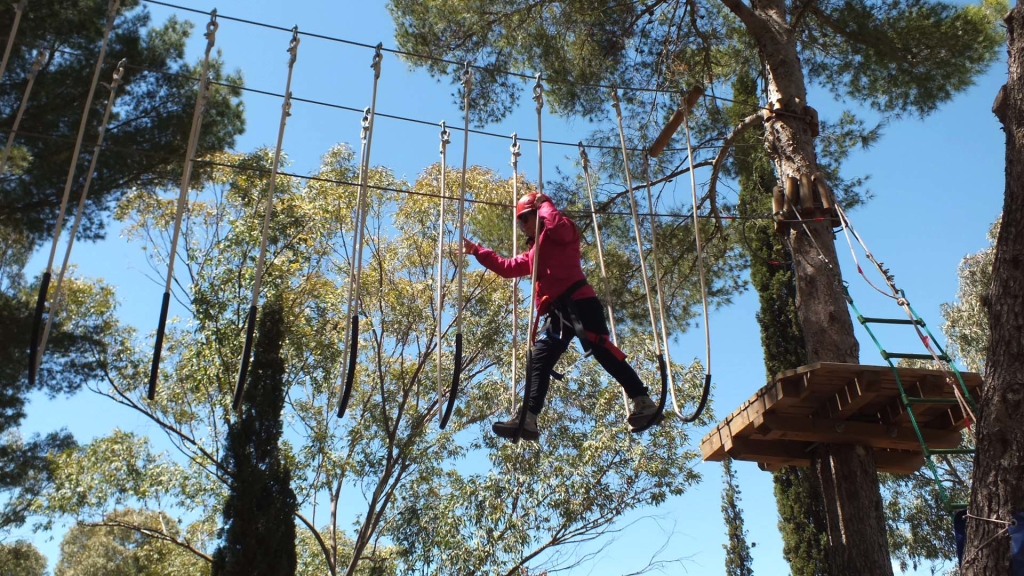 For those who want to have fun outdoors, and experience the thrill of climbing and challenging the laws of gravity, the adventure parks of Milo, Nicolosi and Ragalna are new realities in the heart of Etna Park: paths suspended among rocks or high-growing trees, with different difficulty levels, suitable for children or adults.

And finally the New Gussonea Botanical Garden, in Contrada Serra La Nave, on the southern side of Etna: more than 10 hectares full of various botanical species of Etna flora, that you can visit in the company of expert guides, only upon reservation.

Excluding the summit areas, large areas of Etna region are dedicated to agricultural and wine production. On the north-western side, the cultivation of the green pistachio of Bronte, a PDO product, is renowned also for its countless and varied confectionery production.

Orchards (apples and pears of Etna, peaches, cherries, medlars, walnuts, chestnuts) are widespread, mostly in the areas of Ragalna, Pedara, Nicolosi and Trecastagni; the excellent quality of Maletto strawberries has to be mentioned.The production of PDO olive oil is mainly concentrated in the areas of ​​S. Maria di Licodia, Biancavilla, Belpasso and Ragalna. Do not miss the special honey and typical biscuits called skiers, which are produced in Zafferana Etnea, and the zeppole or rice crispelle, widespread everywhere. 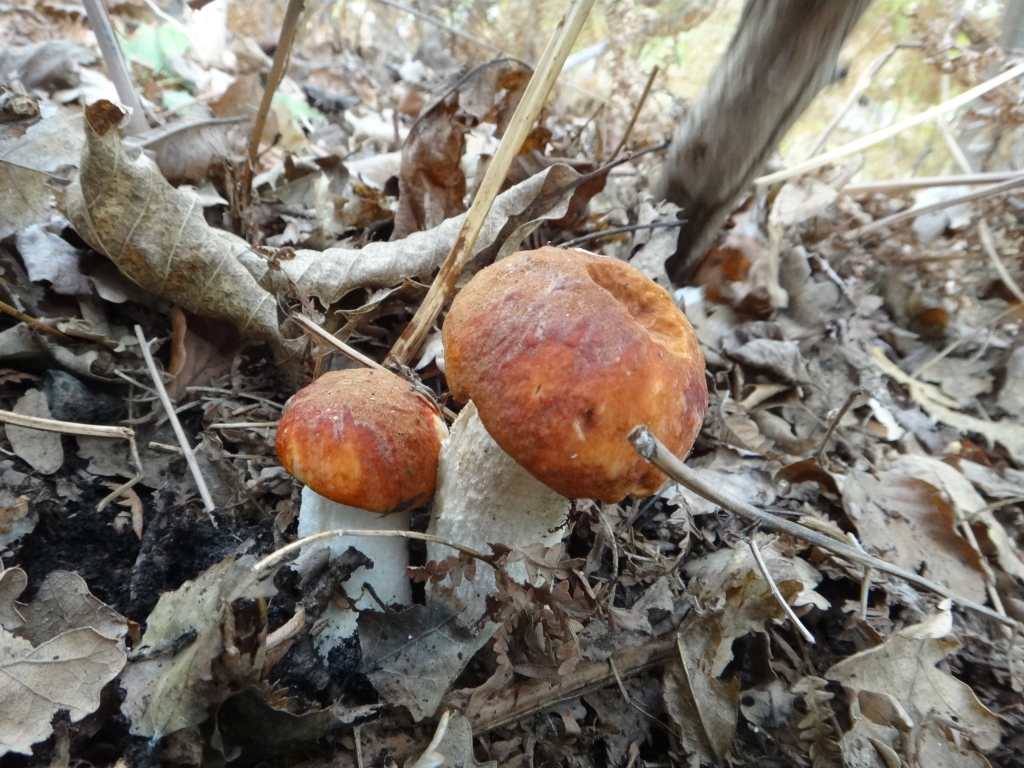 As in all mountain sites, there are plenty of mushrooms, one of the main ingredient of many typical dishes as the famous salsicce al ceppo (sausages prepared in the old way,  on special oak wood)

Wine production is also noteworthy: the Etna Wine Route is an area that extends from the north, to Randazzo, up to Piedimonte Etneo on the north-eastern side, and continues south to Viagrande. The whole area is full of cozy wine cellars where you can taste good Etna PDO wine, accompanied by typical local products.