Grammichele (Catania) rises again by will of Carlo Maria Carafa, the prince of Butera,  a great scholar, patron and lover of arts and sciences. He laid the foundation stone of the new town a few weeks after the horrible 1693 earthquake that had completely destroyed Occhiolà,  the village not far from there, whose ruins can still be visited.

Its beautiful hexagonal square, the heart of the city, is well-known and studied in the most important Schools of Architecture and by  the most eminent urban planners, as well as the entire urban grid that radiates around it. A huge monumental bronze statue, a work by the Turkish artist Murat Cura, stands in the middle of the square. The sculpture, an integral part of a big sundial realized under the advice of Professor Giovanni Brinch, symbolizes Time and depicts a kneeling man enclosed within a series of circles as in an Armillary Sphere that traps him ineluctably in his time.

The  plan of the city, called “ad exagonum”,  was designed by the Prince himself, and carved by the architect Friar Michele da Ferla on a slab of slate  which is still preserved in the Town Hall. Carlo Maria Carafa, after helping the population exhausted by the earthquake, laid the foundation stone of the new town during a great ceremony, attended by nobles and religious. It was April 18, 1693.

The large hexagonal square is overlooked by the Town Hall, designed by Carlo Sada in 1896, which keeps inside a precious small museum of Archaeology, and by the beautiful church of San Michele, whose construction was funded by the heirs of the Prince of Butera. 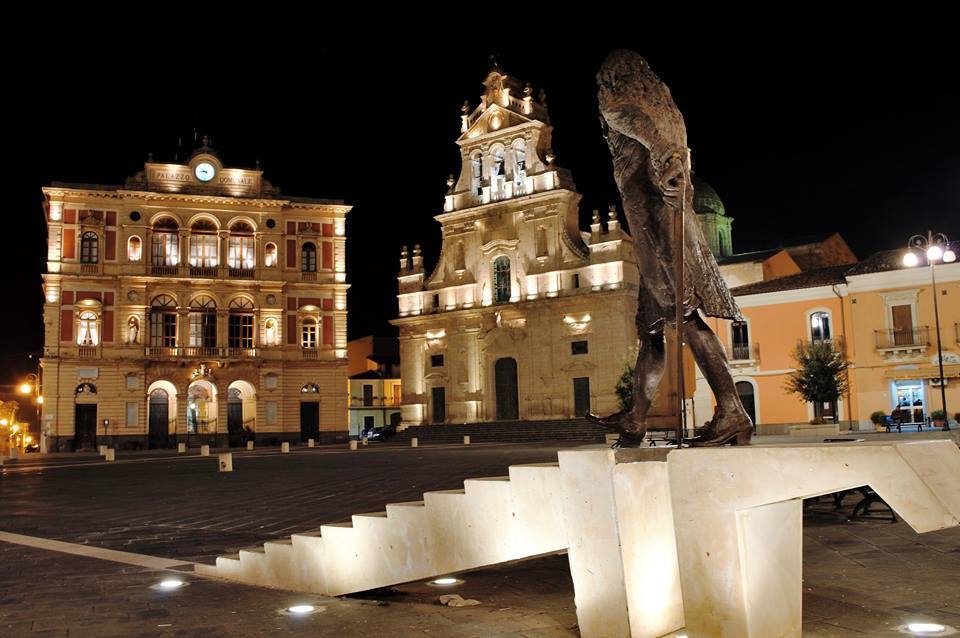 A bronze statue of the Prince of Butera welcomes visitors in the beautiful hexagonal square of Grammichele. The sculpture is placed on a base made up of a series of steps symbolizing the virtues of knowledge: philosophy, religion, science, politics, literature and art. The monument is a tribute to Carafa’s love for knowledge. Its author, Paul Guarrera, has represented the city founder while going down a stairs leading to the heart of the city.  Looking closely, you can see that the left leg seems to rest still on Occhiolà, followed by a void symbolizing the earthquake and representing the past that can not return anymore, while the right leg is already stretched to the stairs leading to the new city, representing the future. At the foot of the stairs, a bronze plaque commemorates the edict pronounced by the Prince on the occasion of the laying of the first stone.