One of Sicily’s oldest towns, christened with many names and resurrected on many ruins. First of all, we need to visit the Valley of the Temples and the extraordinary exhibits displayed in its Regional Archaeological Museum to better understand that Agrigento, founded in 581 B.C. by Greek, Rhodium-Cretan colonists, to become Akragas the following century, was one of the most resplendent centres in the Mediterranean. For that reason, in 1997, UNESCO registered it as a world heritage site.

Of Agrigentum, you still have the remains of elegant noble villas and the regular roads of the Hellenistic-Roman District

The historical centre extends on the hill of and its main roads are via Atenea and the nearby, panoramic Viale della Vittoria dominating the Valley and the sea. During our walk past shops, boutiques and coffee houses we will try the ricotta-based pecorino ice-cream. 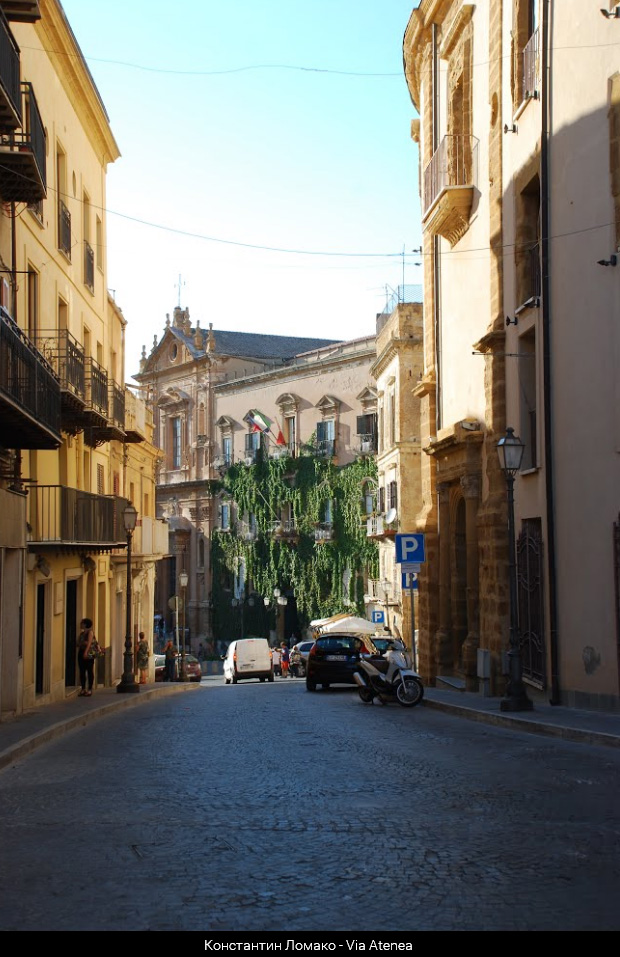 Unbelievable, isn’t it? A delicate ice-cream made with sheep’s ricotta, a typical (unique) taste, a real, little known Agrigento product. Now let’s explore the maze of small streets connecting, based on their Arab layout, the oldest monuments.

Founded towards the end of the XI century by Bishop Gerlando, it is in a Norman-Gothic style and is entered by a wide, gently sloping staircase flanked by a magnificent, unfinished XV century belltower. The building houses the precious Cathedral Treasure, particularly rich in works of art. Let’s climb the belltower to admire the roofs of Girgenti from above. 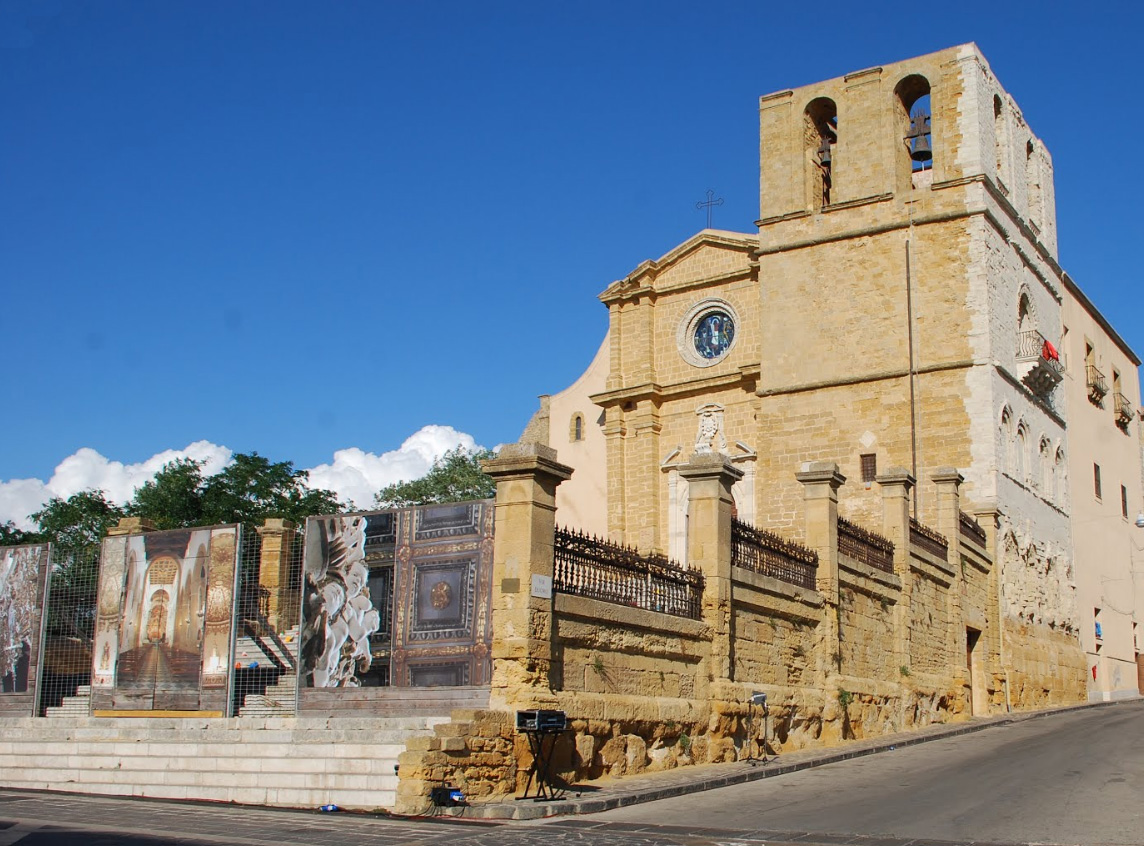 Along via di Santa Maria dei Greci we reach the church of the same name, in the Medieval town’s oldest district. Built in the XII century, its foundations stand on the base of a V century B.C. Doric Temple which some believe to be that of Athena, on the Acropolis of Akragas. Preceded by a small, elegant courtyard, the Church facade has a XIII century Arab-Norman portal and lovely mullioned windows. Inside it has three naves with a wooden ceiling and is enriched by what remains of XIV century frescos, a XVI century wooden statue and a sarcophagus holding the remains of a nobleman from Palermo. From the left-hand nave you enter the northern base of the Doric temple, of which some column tambours are still visible. 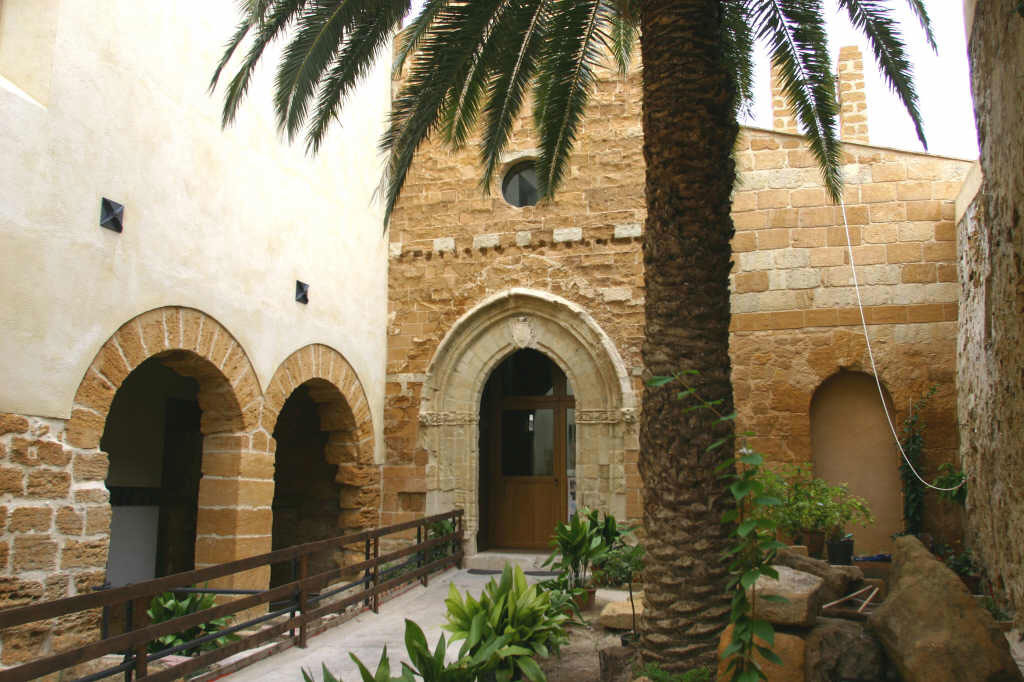 Abbey of Santo Spirito. Built in 1260, the complex includes the church and the adjacent Cistercian monastery. Outside, the church has a magnificent Chiaramonte style portal surmounted by a rich rose window, in a more recent Baroque context. Inside, XVIII century, numerous Serpotta stuccoes decorating the church walls, a XVI century stoup, a Madonna by Gagini (or the Gagini school) and a 1758 wooden coffered ceiling containing the coat-of-arms of the Chiaramonte family. It was, in fact, the wife of Federico Chiaramonte, Marchisia Prefoglio, who made it possible for the complex to be built with a donation. The adjacent monastery, or Great Abbey, dated 1290, has a magnificent cloister with Gothic portals: one an imposing pointed arch flanked by mullioned windows, entrance to the Chapter House. Inside the Monastery has some XVI and XIX frescos. The monastery nuns prepare delicious almond and pistachio cakes, from a centuries-old recipe… let’s suffer and taste them! 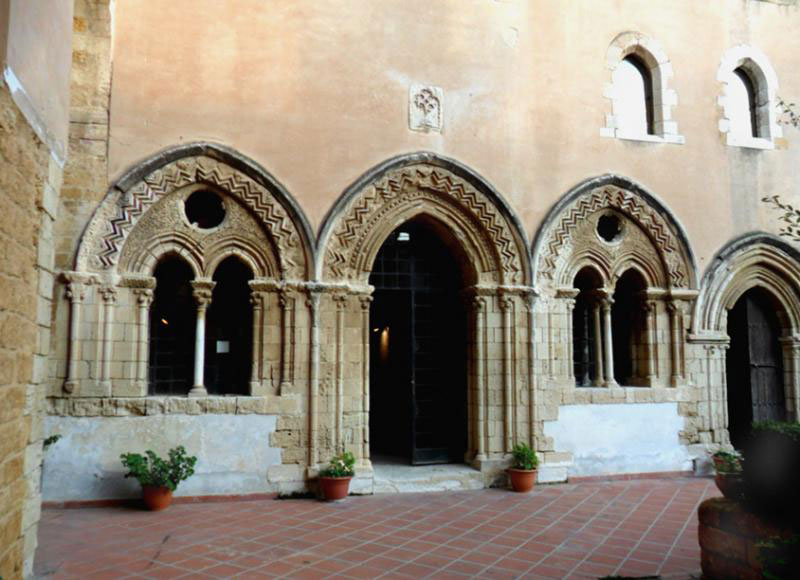 It stands just outside town, in the S. Nicola district, and has a panoramic view of the Hill of Temples. It illustrates the story of ancient Agrigento and its territory, from the prehistoric to the Hellenization periods. The rich collection of historical finds includes the Telamon over 7 metres high, the Ephebe of Agrigento. Next to the museum, the medieval Church of S.Nicola containing the Sarcophagus of Phaedra (one of the maximum expressions of Roman sculpture in Sicily). Its lush garden awaits us for a cool break. 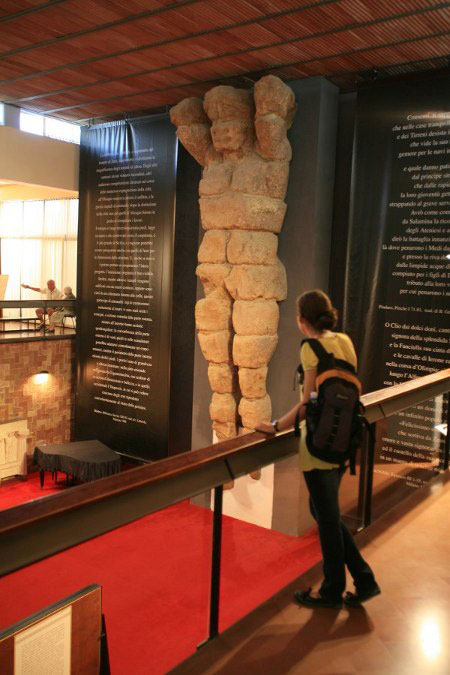 [They] extend for kilometres, to the east and west, from Licata, city of ancient origins, passing through Punta Bianca, with a succession of almost deserted beaches, up to the more mundane San Leone,  the nerve centre of summer in Agrigento. Something for all tastes and all with fine, white sand.

[It] is a country house dated end of the XVIII century in the Caos district, a plateau overhanging the sea amongst olive and oak trees. Rooms with views of the countryside are home to a vast collection of photographs, reviews, and honours received, first editions of books with handwritten dedications, paintings dedicated to Luigi Pirandello, posters of his most famous works played in theatres around the world. The House often hosts temporary exhibitions dedicated to the Author. Since 1987, the House has become one with the Luigi Pirandello Library. Up to a few years ago, the garden contained the centenary pine the writer used to pause to think and write under. He wanted his ashes to be buried there. Due to natural causes, the pine tree no longer stands, but this corner is still full of charisma.

Discover more about Writers Road of the Valley of the Temples 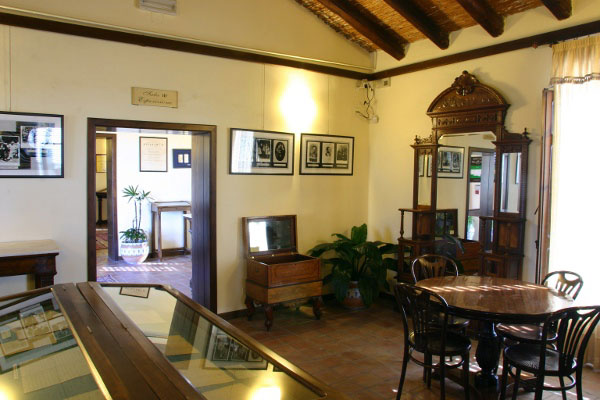 7 – The Festival of the flowering Almond tree

In 1934, Count Alfonso Gaetani di Naro, small village with a beautiful castle rich of medieval monuments, was looking for a way to promote Agrigento specialities. A festival that would bring people to Agrigento directly during the main production period. That is how the Festival of the flowering Almond tree first started. In early years, the festival was a parade of floats and island folk groups. But that changed over the years. It widened its borders and now invites groups from other European countries. This initiative led to the “International Folklore Festival” which was then opened to companies from overseas. Between february and march, the Valley of the Temples lives a week of celebration and encounters between peoples. The highlight is the atmospheric lighting of the cauldron of friendship in front of the Temple Concordia.

The Festival of the flowering Almond trees

The ideal spot to smell and breathe in the fragrance of the Mediterranean scrub. In Terone’s time, about 2500 years ago, this small valley was full of water oozing out of the surrounding rocks which was then conveyed by a complex systems of tunnels and hypogea. At the centre, a huge pool which soon became the solace of the rich inhabitants of Akragas and a meeting place for the townsfolk. Later it was filled with earth and became a fertile garden. Since 1999, this area, inside the Valley of Temples and just a short way away from the temple of Castor and Pollux, has been under the protection of FAI the Italian Environmental Fund. It is a precious example of Mediterranean scrub rich in citrus, pistachio, carob, walnut, mulberry and pomegranate trees that still grow thanks to the ancient water network. Events, concerts and exhibitions are often held here.

This magic palce is located along a stretch of sea between Realmente and Porto Empedocle. Its rock is made of marl, which is soft, chalky, clayish and blinding white. Nature, a great artist, has worked this area over time, making it softly sinuous with the help of the sea and the salty breeze, forming terraces and smoothing out every corner. 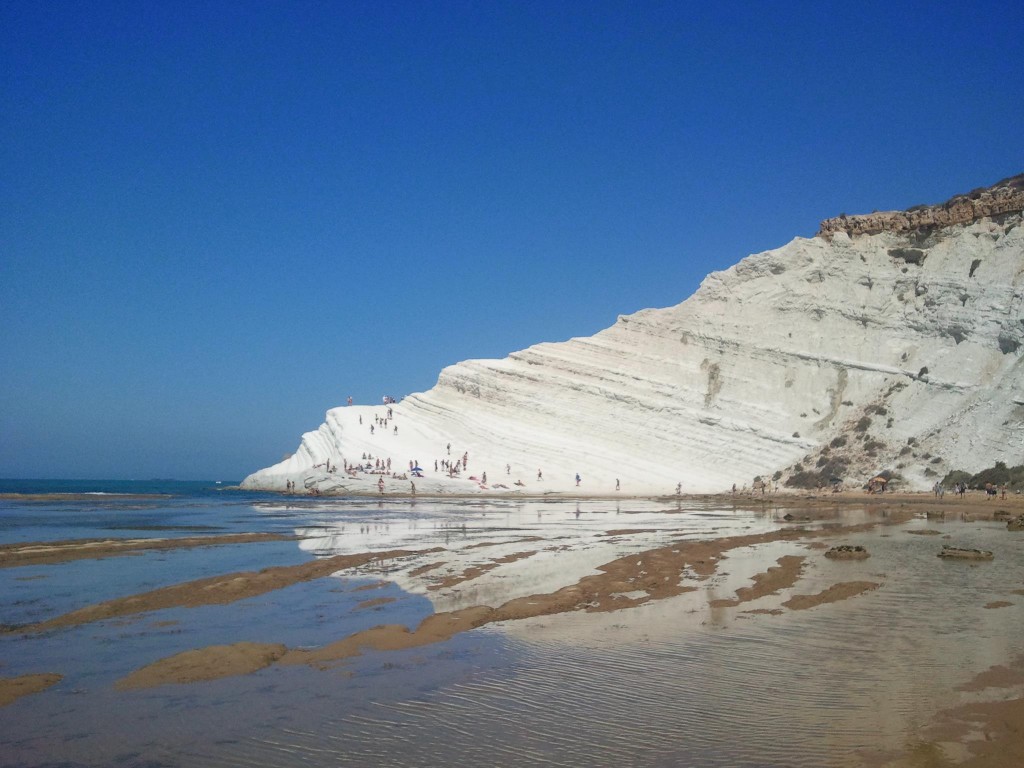 Farm Cultural Park  in Favara, half an hour from the Valley of the Temples, is the sixth site in the world among the ten must-see destinations for those who love contemporary art, according to the classification of the English blog “Purple Travel”. It is a modern art site. This small abandoned village, in Agrigento area, has become a creative workshop where many artists leave their mark. There are seven courtyards, connected one to another. Seven white courtyards, in Arabic style. It’s a cultural park, in which you can find art galleries, photography exhibitions, music events, fantastic food and good wine to taste. 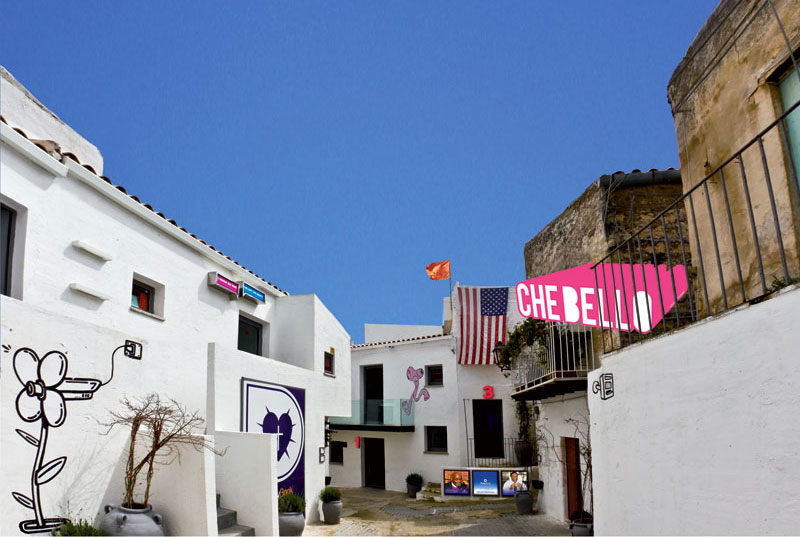 From Favara, after about an hour’s drive, we reach Sciacca: the sea and a lot of works of art. On the eastern side there is Monte Kronio, a big mountain with the cave-chapel where the hermit Saint Calogero lived and, next to it,  the natural steam caves.  Let’s enjoy a 5 senses tour through the guided tours offered by Sciacca Ecomuseum and then let’s visit the Enchanted Garden, a few kilometers away. 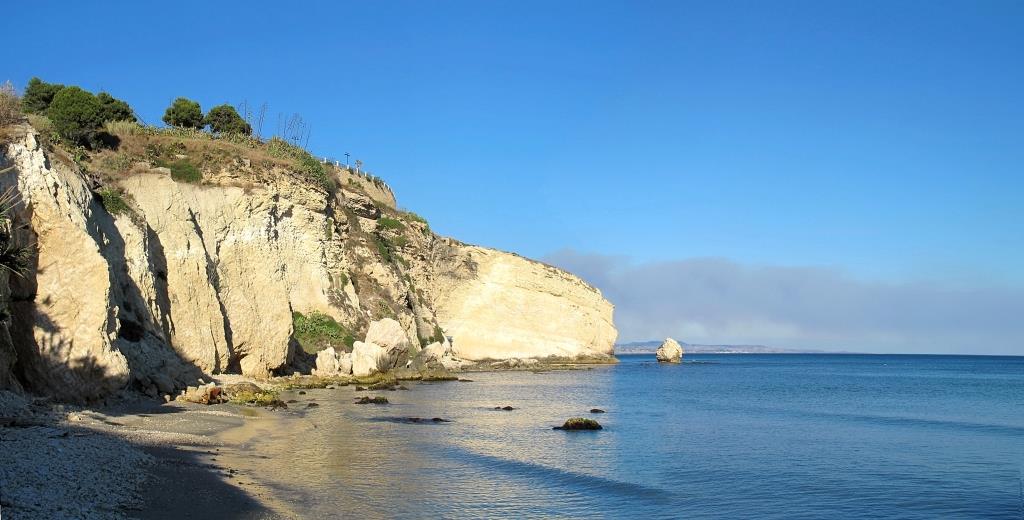 Going to the hinterland let’s stop in Burgio,  an ancient village rich in history and well known for its artistic ceramics and its bronze bells. 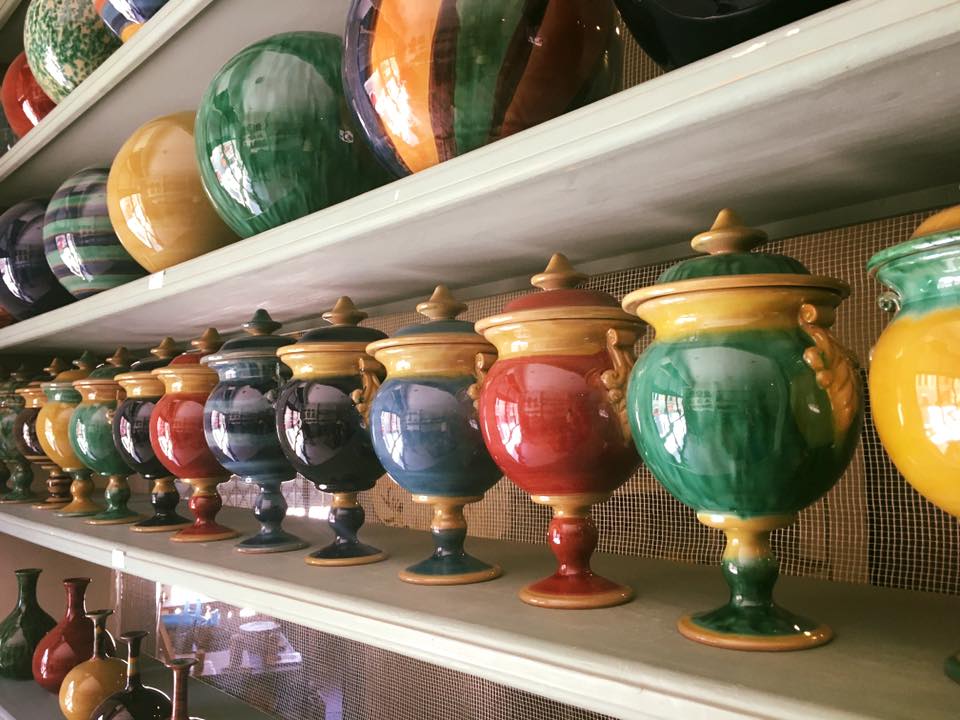 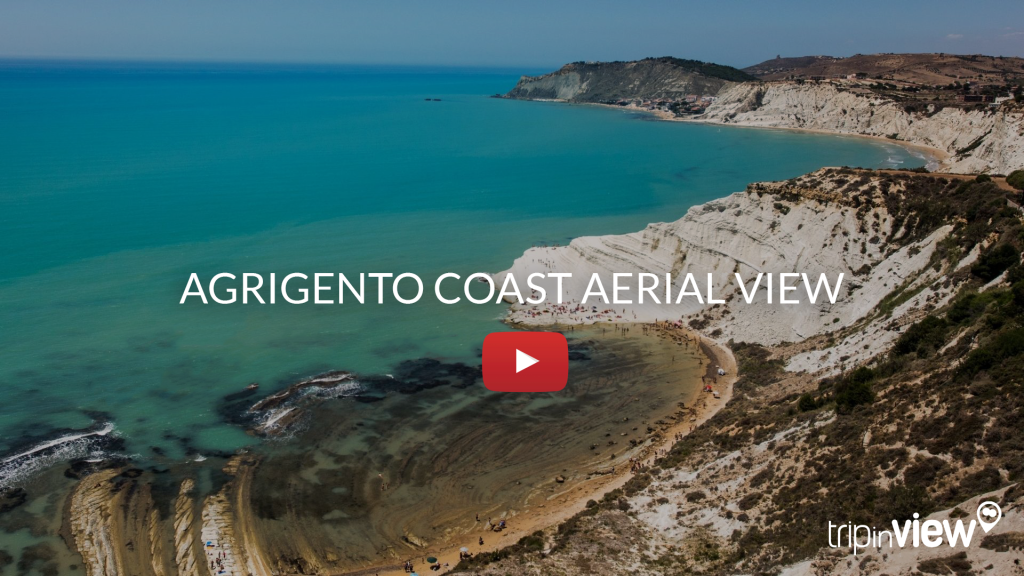